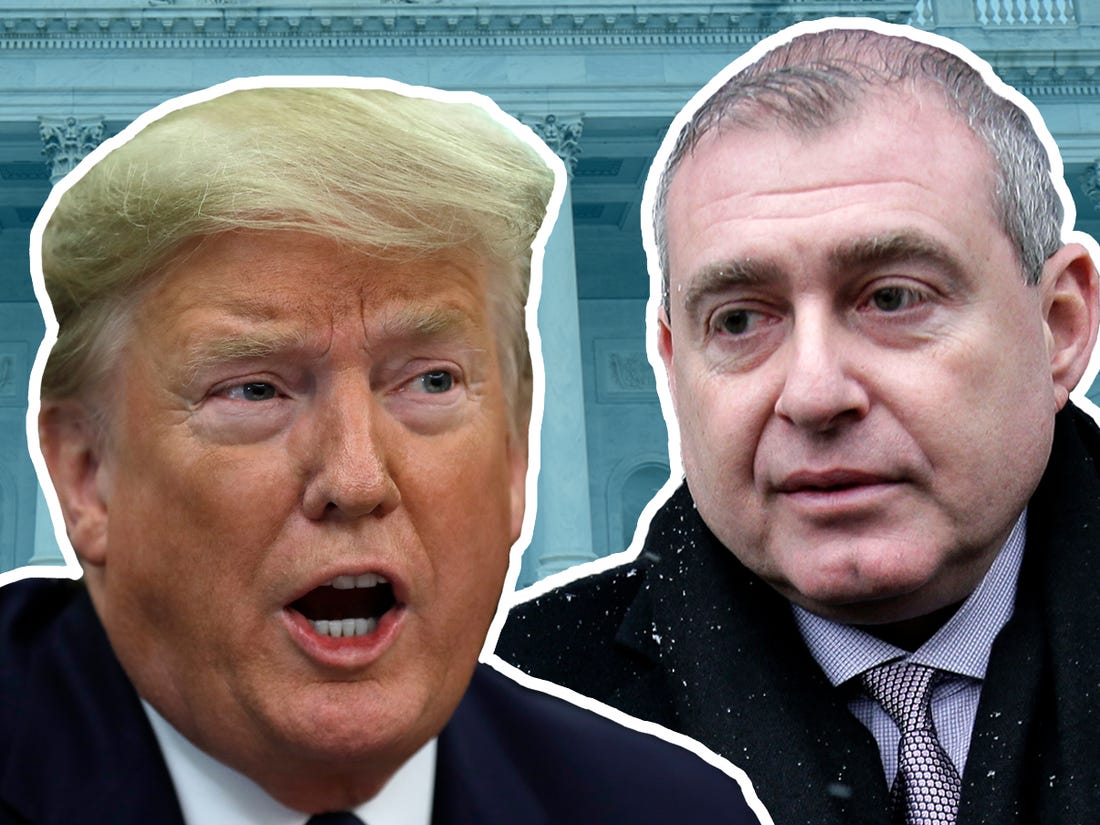 A recording reviewed by ABC News appears to capture President Trump telling associates he wanted the then-U.S. ambassador to Ukraine Marie Yovanovitch fired while speaking at a small gathering that included Lev Parnas and Igor Fruman — two former business associates of Rudy Giuliani who have since been indicted.

The recording appears to contradict statements by Trump and support the narrative that has been offered by Parnas during broadcast interviews in recent days.

The Daily Beast says the recording was made by Fruman.

Lev Parnas told the New York Times that he had turned over to congressional Democrats a recording from 2018 of President Trump ordering the dismissal of Marie Yovanovitch, the United States ambassador to Ukraine at the time.

The recording emerged as Democrats are pressing the Senate to call more witnesses and seek additional evidence for the trial, saying there is more to be learned about the pressure campaign against Ukraine.

Parnas located the recording after its existence was first reported by ABC News.

Meanwhile, President Trump’s impeachment defense team plans to present arguments for about two hours on Saturday, an official familiar with the strategy confirmed to The Hill. Their presentation is expected to start around 10 a.m. ET.

CBS News reports that Republican senators have been warned by President Trump team: “Vote against the president, and your head will be on a pike.”

President Trump is complaining that his impeachment defense begins on a Saturday: “After having been treated unbelievably unfairly in the House, and then having to endure hour after hour of lies, fraud & deception by Shifty Schiff, Cryin’ Chuck Schumer & their crew, looks like my lawyers will be forced to start on Saturday, which is called Death Valley in T.V.”

Karoun Demirjian: “Saturday’s session, we keep being told, is expected to be short.”

Secretary of State Mike Pompeo abruptly ended an NPR interview when he refused to answer questions from Mary Louise Kelly about whether he owed former Ukraine ambassador Marie Yovanovitch an apology.

“Immediately after the questions on Ukraine, the interview concluded. Pompeo stood, leaned in and silently glared at Kelly for a period of several seconds before leaving the room.”

“A few moments later, an aide asked Kelly to follow her into Pompeo’s private living room at the State Department without a recorder. The aide did not say the ensuing exchange would be off the record.”

“Inside the room, Pompeo shouted his displeasure at being questioned about Ukraine. He used repeated expletives, according to Kelly, and asked, ‘Do you think Americans care about Ukraine?’ He then said, ‘People will hear about this.’”

President Trump revealed the logo for the new Space Force branch of the military. CNBC notes it looks a lot like the Star Trek logo for the fictional Starfleet from the iconic science fiction television and film franchise.

House manager Jerry Nadler closed out his remarks at the impeachment trial with some of the most fiery language that’s been heard so far directed at President Trump, calling him “a dictator,” CNN reports.

Nadler said Trump is the “first and only president ever to declare himself unaccountable and to ignore subpoenas backed by the Constitution’s impeachment power.”

The Pentagon has confirmed that 34 U.S. service members were diagnosed with traumatic brain injuries after the Iranian missile strike in Iraq. Eight of them were flown back to the United States for medical treatment, CNN reports.

President Trump originally said there were no casualties.

“House Democrats will rest their case on Friday and, despite bipartisan praise for their presentation, it does not appear to have accomplished its chief objective of persuading enough Republicans that they need to hear from live witnesses and see withheld documents,” the New York Timesreports.

In case you missed it, Rep. Adam Schiff’s closing argument last night at President Trump’s impeachment trial will be remembered as one of the great American speeches.

Said Schiff: “We believe we will have made the case overwhelmingly of the President’s guilt. He has done what he’s charged with… but I want to address one other thing tonight. Okay he’s guilty, does he really need to be removed?”

“Benny Gantz, the leader of Israel’s Blue and White party and the main political opponent to Israeli Prime Minister Benjamin Netanyahu, is considering turning down President Trump’s invitation to come to Washington next week to discuss the U.S. Israeli-Palestinian peace plan,” Axios reports.

Associated Press: “It’s Trump’s latest nod to the white evangelical voters who have proven to be among his most loyal backers. And it makes clear that, as he tries to stitch together a winning coalition for reelection, Trump is counting on the support of his base of conservative activists to help bring him across the finish line…”

“It also shows how much times have changed.”

“Past presidents who opposed abortion, including Ronald Reagan and George W. Bush, steered clear of personally attending the march to avoid being too closely associated with demonstrators eager to outlaw the procedure. They sent remarks for others to deliver, spoke via telephone hookup or invited organizers to visit the White House.”

Rep. Matt Gaetz (R-FL), one of President Trump’s most vocal allies, praised House Democrats for the way they presented the case against Trump in his impeachment trial, Business Insider reports.

Gaetz said they presented their case to the public as if it were “cable news,” and he praised their use of multimedia.

However, he noted the president’s defense looked like “an eighth-grade book report. Actually, no, I take that back,” he said, adding that an eighth-grader would know how to use PowerPoint and iPads.

“A growing number of Republicans are pointing to President Trump’s threat to invoke executive privilege in order to make their case against subpoenas sought by Democrats for key witnesses and documents, a development that could bolster Senate Majority Leader Mitch McConnell’s goal of a swift end to the impeachment trial,” CNN reports.

“GOP senators are privately and publicly raising concerns that issuing subpoenas — to top officials like acting White House chief of staff Mick Mulvaney and former national security adviser John Bolton and for documents blocked by the White House — will only serve to drag out the proceedings. Plus, many say there’s little appetite for such a time-consuming fight.”

“If you want to know how President Donald Trump’s impeachment trial could play out, keep your eye on Lamar Alexander,” Politico reports.

“On the most important question of the trial — whether or not to subpoena witnesses — the 79-year-old Tennessee Republican is a wild-card. Privately, senior Senate Republicans expect the vote to seek witness testimony to fail, but they are watching Alexander and several other Republicans closely. And wherever Alexander comes down is almost sure to be the majority position in the Senate.”

Politico: “The Trump administration is finalizing a plan to let states convert a chunk of Medicaid funding to block grants, even as officials remain divided over how to sell the controversial change to the safety net health program.”

“Capping Medicaid spending, even among just Obamacare’s expansion population, would be a major transformation of how the federal government finances the safety net health care program that has grown to cover about 1 in 5 Americans. The plan is guaranteed to enrage critics and invite attacks from Democrats in an election year.”

Sen. Lindsey Graham told reporters he would resist calls from conservatives next week to try to call the whistle-blower and the Bidens to testify at the trial, the New York Times reports.

Said Graham: “There’ll be a lot of pressure on me to call the whistle-blower, to call Schiff, to call Hunter Biden and Joe Biden. I’m not going to give in to that pressure, because I don’t think it will serve the Senate and the country well, there’s ways to do this outside of this trial.”

Washington Post: “In the first two years of the Trump administration, more than 1,600 federal scientists left government… That represents a 1.5 percent drop, compared with the 8 percent increase during the same period in the Obama administration.”