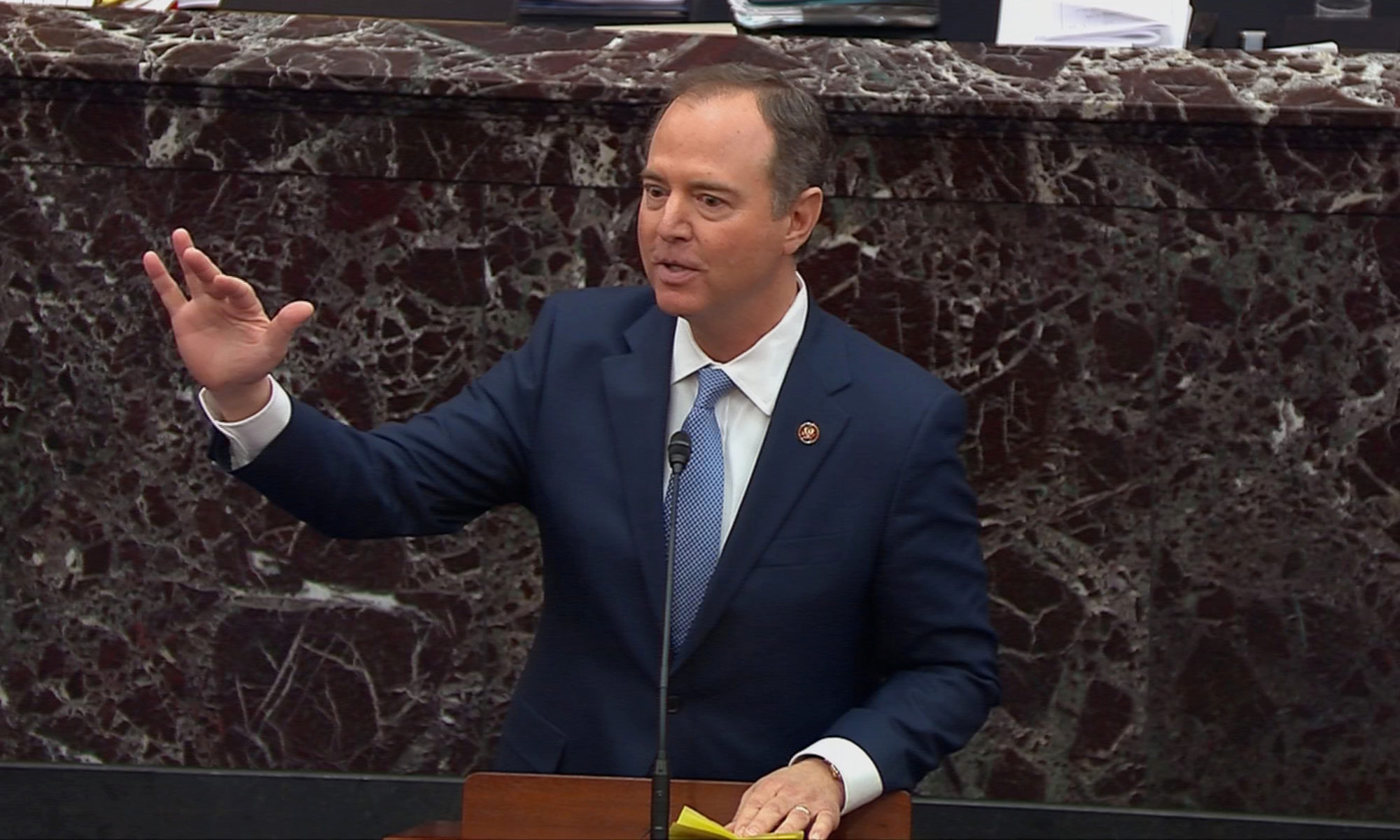 Politico reports that “one by one, the seven House impeachment prosecutors seeking President Trump’s removal from office reconstructed a case against the president so dense — at times, head-scratchingly complex — that it was hard for senators new to the material to keep up.”

The New York Times called it “a meticulous and scathing case for convicting President Trump and removing him from office on charges of abuse of power and obstruction of Congress.”

The Washington Post reports Rep. Adam Schiff “gave an emotional closing, rehashing the facts of the case as presented over the last eight hours, urging senators to learn the ‘full truth’ and warning that the ‘truth is going to come out.’”

The organizing resolution for the Senate impeachment trial of President Trump suggests that the Democrats will conclude their case today. The White House will get Saturday, Monday, and Tuesday to present their defense, such as it is (and I do not think they will take the full three days). Tentatively, questions from Senators will be heard on next Wednesday, the 29th and Thursday the 30th. And then on Friday, January 31st, I suppose we will have votes on witnesses and new documents, or whether to dismiss the case, or I suppose they can vote on whether to convict or acquit.

Fox News senior legal analyst Judge Andrew Napolitano: “What is required for removal of the president? A demonstration of presidential commission of high crimes and misdemeanors, of which in Trump’s case the evidence is ample and uncontradicted.”

“As Democratic impeachment managers made the case against President Trump on Wednesday and Thursday, Republican senators rolled out a rationale for their future vote to acquit: that the trial is a waste of time because Democrats aren’t presenting new evidence,” Vox reports.

“But on Tuesday night, every Republican senator took vote after vote to block impeachment managers from gathering new documents and compelling witness testimony. So Republicans are complaining about Democrats not doing something they’re preventing them from doing.”

“The Trump administration will finalize a rule to strip away environmental protections for streams, wetlands and other water bodies, handing a victory to farmers, fossil fuel producers and real estate developers who said Obama-era rules had shackled them with onerous and unnecessary burdens,” the New York Times reports.

“From Day 1 of his administration, President Trump vowed to repeal President Barack Obama’s ‘Waters of the United States’ regulation, which had frustrated rural landowners. His new rule, which will be implemented in the coming weeks, is the latest step in the Trump administration’s push to repeal or weaken nearly 100 environmental rules and laws, loosening or eliminating rules on climate change, clean air, chemical pollution, coal mining, oil drilling and endangered species protections.”

Politico: “Senate Republicans have been publicly and privately maneuvering to give Trump as quick an acquittal as possible while still keeping 51 GOP senators on board. Senate Majority Leader Mitch McConnell (R-KY) has largely thrown cold water on the idea of hearing from new witnesses and many of his members are eager to end the trial, not extend it.”

Wall Street Journal: “At the end of the session on Wednesday, Chief Justice John Roberts noted that a ‘single one-page classified document’ identified by the House managers for filing with the Secretary of the Senate would not be made part of the public record or printed, ‘but shall be made available’ to senators to review in a classified setting.”

The classified document appears to be related to a phone call between Vice President Mike Pence and Ukraine President Zelenskiy.

“Officials at the White House’s Office of Management and Budget were laying the groundwork to freeze military aid to Ukraine the night before President Trump’s controversial phone call with the Ukrainian President, newly released, heavily redacted emails show,” CNN reports.

“On the evening of July 24, the night before the call, OMB officials shared a ‘Ukraine Prep Memo’ with Michael Duffey — the office’s associate director of national security programs, a political appointee and the budget official who would play a direct role in carrying out Trump’s funding freeze.”

Vox: “Starting with The Five, the network’s early evening roundtable commentary show, and continuing throughout the evening, Fox News broadcast portions of screen-in-screen video of the trial. But instead of playing the audio, network hosts provided the normal Trumpian spin. So while someone who just looked at the screen may have concluded Fox News was covering the trial, in fact it wasn’t covering it at all.”

“The network went as far as to broadcast screen-in-screen video of the trial during commercial breaks — but, again, without the sound that was necessary to make any sense of what was being discussed.”

The National Review pushes back against one of the main arguments President Trump’s defenders have made in recent weeks: The idea that impeachment requires a crime.

“Senate Republicans, by and large, have reached an unspoken consensus about President Trump and Ukraine. He should not have put a temporary freeze on congressionally authorized aid to Ukraine, should not have dabbled with using the aid to get Ukraine to investigate Joe Biden or a nutty theory about Ukrainian hacking during the 2016 election, and should not have kept defending his ‘perfect call’ as such. At the same time, his conduct does not merit his removal from office — especially since voters will get to pass judgment on that conduct in a few months.”

“It’s a reasonable position, and it’s the case that Republicans ought to make in public. They are inhibited from doing so by the president’s obstinacy. Instead of sticking to the most defensible case for a Senate acquittal of Trump, Republicans from the president on down are making arguments that range from the implausible to the embarrassing.”

A video shows Prince Charles shaking hands with a number of dignitaries attending at an event commemorating the 75th anniversary of the liberation of Auschwitz — before skipping over Vice President Mike Pence.

“Crown Prince Mohammed bin Salman sent Jeff Bezos a photograph of woman loosely resembling the one he was having an affair with months before the National Enquirer published a report exposing the liaison, according to a United Nations investigation,” the Daily Beast reports.

“Two United Nations special rapporteurs released a statement Wednesday detailing forensic evidence linking MBS to the Bezos hack, which suggests the future king of Saudi Arabia may have been threatening the owner of The Washington Post and founder and CEO of Amazon.”

Playbook: “As far as we know, there are no plans to allow those Republicans who are troubled by Trump’s actions in Ukraine to express their disapproval in some formal way — be it a resolution or another official action. All they can do is go on the record with their concerns.”

“What this means is that unless the dynamics in the Senate change in the coming days, or something jolts the proceedings — John Bolton coming forward with shocking new information, for example — the U.S. Congress will soon say it’s OK to use the power of the presidency to conduct opposition research on an opponent.”

“Precedent matters in Washington. Just look at how Bill Clinton’s Senate trial became the blueprint for Trump’s. The next president will now be able to argue that it’s no problem to lean on a foreign government for political help. After all, Congress said so.”

“So, we’re doing very well. I got to watch enough. I thought our team did a very good job. But honestly, we have all the material. They don’t have the material.”

CNN: “The Justice Department did not hand over the FBI’s summary of Jared Kushner’s interviews with special counsel Robert Mueller last week — despite a judge’s order to do so — because ‘a member of the intelligence community’ needs to ensure the material has been properly redacted.”

Dahlia Lithwick: “Every time we witness a gun tragedy in this country, Republicans who live in thrall to the death cult that is the National Rifle Association make the same argument: “It’s too soon.” It’s too soon to politicize whatever the existing tragedy might be, and we must all wait until the appropriate time and politicize it then. Two weeks later it is always, always too late. Ten minutes later, it would also be too late. This is the long-standing procedural deflection for remediation of any exigent political problem: Berate your opponent for intemperate and unseemly haste, then run the heck out of the clock. There are, evidently, always only twelve seconds in which the time for action is ripe.”

“Throughout this first day of the historic Senate impeachment trial for Donald Trump on Tuesday, this was the standard play for Trump’s legal team. Scoff at Democrats for being hasty, reckless and intemperate as they moved impeachment through the House, then insist they were now simply too late to do anything. The Republicans, as has been noted, will have to rely exclusively on such purely procedural contortions throughout the Senate trial in order to obstruct testimony and evidence that was already ably obstructed by the White House throughout the House inquiry. But there is a laughable argument being advanced in these opening hours that should now be, well, laughed at. In tabling Chuck Schumer’s various motions to call witnesses and subpoena documents and records, Trump’s defenders are somehow claiming both that it’s too late to obtain such evidence, and also, of course, that it’s far too early.”

Jonathan Bernstein: “I’ve watched two days of the impeachment trial so far and I’m sure of one thing: It’s not what Trump wanted. It’s almost certainly not what McConnell wanted.”

“In fact, it’s not what I and some others feared — a full-on show trial focused on smearing former Vice President Joe Biden, House Speaker Nancy Pelosi and any other Democrat whom Trump wants to target. There’s been a bit of that, and I’m sure there will be more. It’s what the president’s lawyers want to do with their time. But if those who believe that all Republicans will ruthlessly exploit every opportunity by taking maximum advantage of their partisan power were correct, we would never have had hours and hours of Democratic House managers speaking on the Senate floor, and to the TV cameras, about Trump’s malfeasance.”

“Indeed, if it was up to McConnell, I think the only question would be whether he would have dismissed the trial on Day One — or worse.”

Said Mnuchin: “Is she the chief economist or who is she? I’m confused… After she goes and studies economics in college she can come back and explain that to us.”