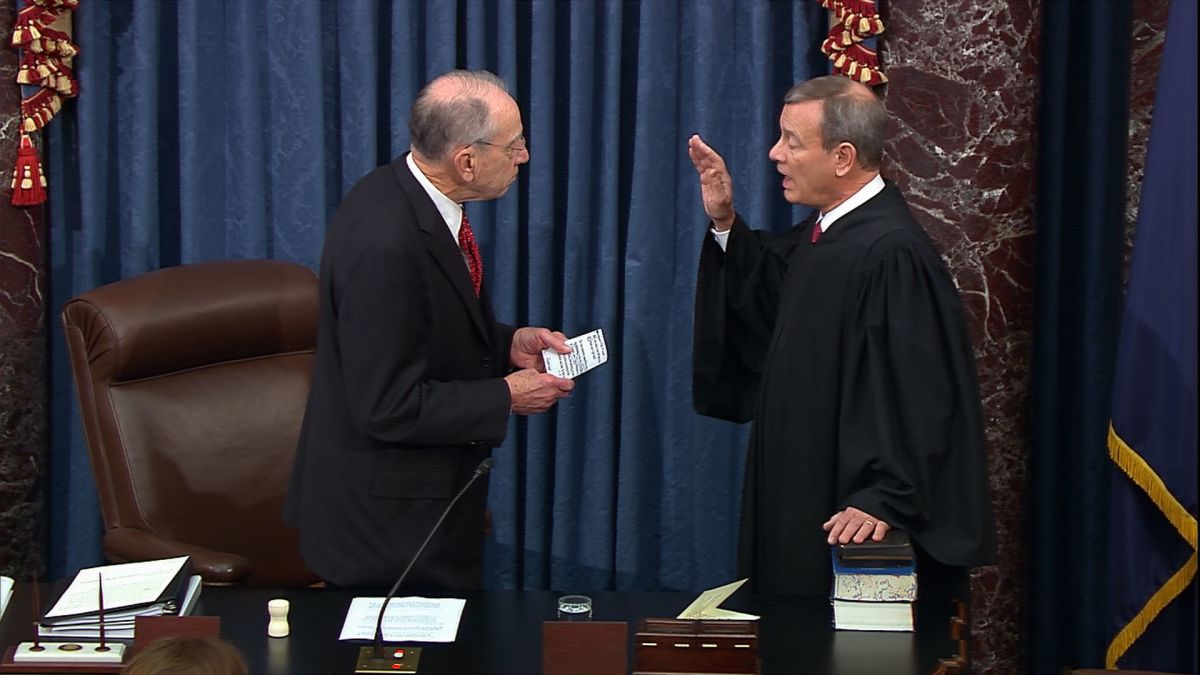 The House impeachment managers went to the Senate chamber to read the articles of impeachment against President Trump aloud to senators.

The chief justice of the United States, John Roberts, will administer an oath for the senators to deliver “impartial justice.”

The New York Times has a rundown of the day’s activities. The trial is expected to formally begin on Tuesday.

The nonpartisan Government Accountability Office found that the Trump administration broke the law when it put a hold on aid to Ukraine, the Wall Street Journal reports.

New York Times: “The impoundment law limits a president’s power to withhold money that has been allocated by Congress, requiring that he secure approval by the legislative branch if he wishes to do so.”

From the report: “Faithful execution of the law does not permit the President to substitute his own policy priorities for those that Congress has enacted into law. OMB withheld funds for a policy reason, which is not permitted under the Impoundment Control Act.”

“The deal now heads to President Trump’s desk for his signature, allowing the president to accomplish one of his biggest policy goals ahead of his 2020 re-election battle — hours before the official start of his impeachment trial.”

Sen. Martha McSally (R-AZ) dismissed a CNN reporter as a “liberal hack”and refused to answer questions when asked about new claims that President Trump was involved in a pressure campaign in Ukraine.

“US intelligence officials have quietly asked the Senate and House Intelligence Committees not to hold public hearings on this year’s World Wide Threats Assessment after testimony from agency chiefs last year prompted an angry response from President Trump, CNN reports.

“Officials from the Office of the Director of National Intelligence broached the topic during informal preliminary discussions with committee staff.”

“While these officials made it clear that they don’t want top intelligence officials to testify publicly, they haven’t formally refused to do so as an invitation to appear has not been issued yet… The request is unlikely to be granted.”

“Ukrainian authorities said Thursday they had opened a criminal investigation into whether the former US ambassador to Ukraine, Marie Yovanovitch was under surveillance by associates of Rudy Giuliani while in Kyiv last spring,” BuzzFeed News reports.

Said a Ukraine official: “Ukraine’s position is to not interfere in the domestic affairs of the United States… Ukraine cannot ignore such illegal activities on its territory.”

Associated Press: “In another move touching on the Trump impeachment, Ukraine said it was opening an investigation into reports that Russian hackers gained access to computers of the Ukrainian gas company Burisma.”

“Germany’s defense minister on Thursday confirmed a report that the United States was threatening to impose a 25% tariff on European car exports if it continues backing the Iran nuclear deal,” AFP reports.

Said Annegret Kramp-Karrenbauer: “This expression, or threat, as you will, does exist.”

Lev Parnas told CNN that he would release a photograph with President Trump every time the president denies knowing him, insisting that Trump is “lying” about their relationship.

“The admirers will not make it past the table of contents. Among the chapter titles: ‘Unhinged,’ ‘Shocking the Conscience,’ ‘Paranoia and Pandemonium’ and ‘Scare-a-Thon.’ This verbiage makes Rucker and Leonnig’s book sound like one more enraged polemic. It isn’t. They’re meticulous journalists, and this taut and terrifying book is among the most closely observed accounts of Donald J. Trump’s shambolic tenure in office to date.”

“It reads like a horror story, an almost comic immorality tale. It’s as if the president, as patient zero, had bitten an aide and slowly, bite by bite, an entire nation had lost its wits and its compass.”

Aaron Rupar: “By almost any standard, President Trump’s rally on Tuesday evening in Milwaukee was a bizarre affair. The president went on a lengthy tirade about lightbulbs, toilets, and showers; touted war crimes; joked about a former president being in hell; and said he’d like to see one of his domestic political foes locked up.”

“I tried to capture some of the speech’s disconcerting oddness in my write-up of the event. In many ways, the remarks the president made were typical of him. And that provides the media with a challenge: Describing Trump as he really is can make it seem as if a report is ‘anti-Trump’ and that the reporter is trying to make the president look foolish.”

“But for media outlets that view themselves as above taking sides, attempts to provide a sober, ‘balanced’ look at presidential speeches often end up normalizing things that are decidedly not normal.”

“The FBI has arrested alleged members of a white supremacist group on federal gun charges and other alleged crimes,” the Washington Postreports.

“The charges grew from an investigation of a somewhat new effort among online extremists who refer to themselves as ‘the Base,’ the English translation of ‘al Qaida.’”

The New York Times says the three men “had weapons and discussed traveling to a pro-gun rally next week in Richmond, Va., in anticipation of a possible race war.”

Sen. Susan Collins (R-ME) was caught on video flatly denying that she had accepted campaign contributions from both the Sackler family, owners of Purdue Pharmaceuticals, and drug company giant Eli Lilly.

Collins has, in fact, received contributions from both sources.

Jonathan Bernstein: “Republican senators don’t even know what they’re covering up for, or at least what they would be covering up for if they follow the White House’s preference to rush through the Senate impeachment trial that starts next week and refuse to hear from relevant witnesses and collect relevant documents.”

“Some of those senators, to be sure, just don’t care. They’ve decided they can live with (both politically and ethically) any revelations that may come down the road — that no one who they care about will hold them accountable for burying important evidence, no matter what it turns out to be. Others may really be so fully inside the conservative information-feedback loop that they sincerely think that Trump is an honest, innocent man being railroaded by partisans; they may not even be aware of the considerable evidence to the contrary.”

“But for anyone else? As I said just 24 hours and a couple rounds of ugly revelations ago: ‘If new ugly details are still emerging, who’s to say that more won’t turn up later?’”

Vox: “The core challenge we’re facing today is information saturation and a hackable media system. If you follow politics at all, you know how exhausting the environment is. The sheer volume of content, the dizzying number of narratives and counternarratives, and the pace of the news cycle are too much for anyone to process.”

“One response to this situation is to walk away and tune everything out. After all, it takes real effort to comb through the bullshit, and most people have busy lives and limited bandwidth. Another reaction is to retreat into tribal allegiances. There’s Team Liberal and Team Conservative and pretty much everyone knows which side they’re on. So you stick to the places that feed you the information you most want to hear.”

“It was distilled almost perfectly by Steve Bannon, the former head of Breitbart News and chief strategist for Donald Trump: ‘The Democrats don’t matter. The real opposition is the media. And the way to deal with them is to flood the zone with shit.’”

Alan Abramowitz: “Since World War II, only one incumbent, Jimmy Carter in 1980, has lost his bid for a second term when his party had reclaimed the White House four years earlier. According to my own ‘Time for Change’ forecasting model, first-term incumbents like Trump enjoy a significant advantage beyond what their approval ratings and economic conditions would predict. However, there are strong reasons to suspect that Donald Trump may not benefit from the same incumbency advantage that previous first-term presidents have enjoyed.”

“According to recent research on congressional elections, the advantage of incumbency has declined sharply in recent years as a result of growing partisan polarization. Gary Jacobson of the University of California, San Diego has shown that voters have become increasingly reluctant to cross party lines to support incumbents based on their voting records or constituency service.  The same logic may well apply at the presidential level, especially with an incumbent like Trump whose electoral strategy is based on reinforcing partisan divisions among the public.”