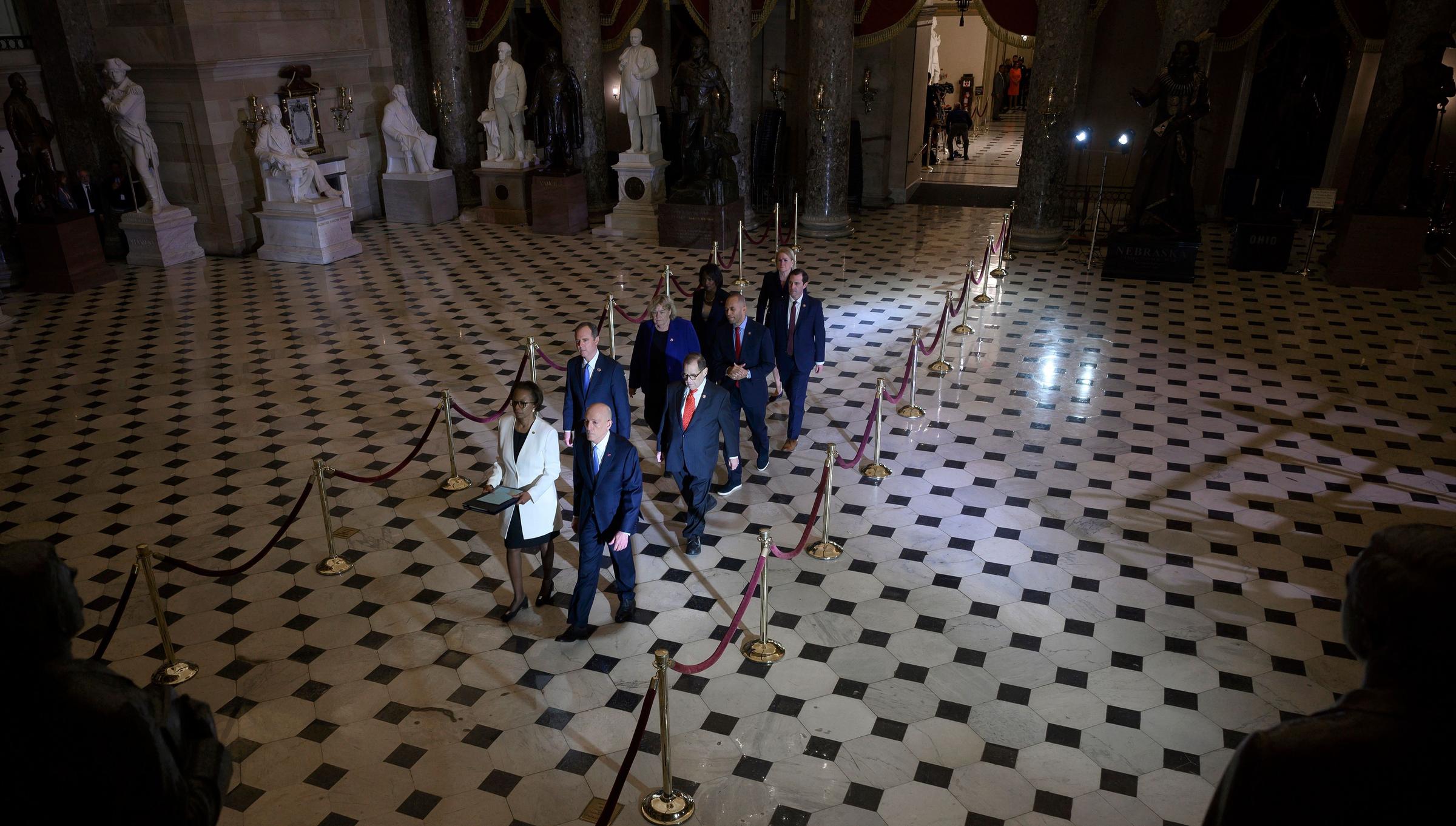 Lev Parnas broke his silence in an interview with Rachel Maddow on  MSNBC. Said Parnas: “President Trump knew exactly what was going on. He was aware of all my movements. I wouldn’t do anything without the consent of Rudy Giuliani, or the President. I have no intent, I have no reason to speak to any of these officials.”

Lev Parnas expressed regret in a New York Times interview for having trusted President Trump and Rudy Giuliani, the president’s personal lawyer and the architect of the Ukraine pressure campaign. His lawyer said he was eager to cooperate with federal prosecutors investigating Mr. Giuliani.

The Hill has five takeaways from Parnas’s earlier interview with Rachel Maddow.

House impeachment investigators released a new set of evidence that were obtained from Lev Parnas, an indicted former associate of Rudy Giuliani — including voicemails, photos, and text messages between Parnas and high-level figures within Trump’s orbit, Politico reports.

“New documents released by House Democrats on Tuesday offered fresh detail on the shadow diplomacy campaign at the center of President Trump’s impeachment, including text messages suggesting that the former United States ambassador to Ukraine was under surveillance while in Kyiv,” the New York Times reports.

“In a series of cryptic text messages, Lev Parnas, an associate of Rudolph W. Giuliani, the president’s personal lawyer, communicated with another man who appeared to be monitoring the movements of the ambassador, Marie L. Yovanovitch.”

Jonathan Bernstein: “The new documents released by House Democrats on Tuesday, exposing previously unknown details about efforts by Trump associates to obtain material in Ukraine that would undermine Trump’s Democratic opponents, probably don’t change anything. Whatever evidence emerges is unlikely to change either the trial outcome or its effect on public opinion.”

“But it has to worry House Republicans, who have already voted to support Trump, and Senate Republicans expecting to vote to acquit him. At least a little bit. Because if new ugly details are still emerging, who’s to say that more won’t turn up later?”

“The House of Representatives voted on Tuesday to send the Senate two articles of impeachment against President Trump, appointing seven Democrats to prosecute the case and initiating only the third presidential impeachment trial in American history,” the New York Times reports.

Senate Majority Leader Mitch McConnell also announced that Supreme Court Chief Justice John Roberts will be sworn in Thursday at 2 PM E.T. by Senator Chuck Grassley (R-IA), the president pro tempore. Roberts will then swear in the rest of the senators.

McConnell also announced that the trial will begin in earnest on Tuesday, after the Martin Luther King Jr. Day holiday. In the meantime, the White House will be formally notified of the pending proceedings.

Jonathan Bernstein: “That’s what CNN’s Chris Cillizza says [that Pelosi lost over her delay]. I don’t see it. The political scientist and Washington Post columnist Dan Drezner is closer to the mark. He tweeted: ‘Pelosi got little from McConnell in delaying the transmittal of impeachment. On the other hand, during the delay some damning new documents appeared, Bolton said he’d testify, and now even the Trump White House expects witnesses will be called.’ John Bolton, one of Trump’s former national security advisers, was part of the White House foreign-policy team when Trump ordered military aid withheld from Ukraine as he pressured that country to investigate a leading Democratic rival, ex-Vice President Joe Biden — the topic of one of the impeachment articles.”

“Overall, I’d say Pelosi may have marginally helped her cause, and it’s hard to make an argument that she harmed it.”

Roll Call: “The Senate sergeant-at-arms and Capitol Police are launching an unprecedented crackdown on the Capitol press corps for the impeachment trial of President Donald Trump, following a standoff between the Capitol’s chief security officials, Senate Rules Chairman Roy Blunt and the standing committees of correspondents.”

“During the trial, a single press pen will be set up on the second floor of the Senate, where lawmakers enter and exit the chamber. Reporters will be confined to the pen, unable to move with senators. No movement will be allowed outside of the corrals and reporters and photographers will need to be escorted to and from the pen.”

Said Kennedy: “There is an effort to limit the press… I’m going to vote against that, if I’m allowed to vote. U.S. senators are grown women and grown men. If they don’t want to make a comment, they know how to say ‘no comment.”

It appears fairly likely that President Trump will deliver will deliver his State of the Union to Congress on February 4 in the middle of the impeachment trial.

Politico: “On Tuesday, the GOP leader quietly invited Republican Sens. Ted Cruz of Texas, Lindsey Graham of South Carolina, John Cornyn of Texas and Mike Lee of Utah to his office to discuss strategy, according to people familiar with the meeting.”

“During the 30-minute session, Cruz pitched McConnell on the idea of witness reciprocity — if Democrats want to hear from former Trump national security adviser John Bolton on the Ukraine scandal, then Republicans get to hear from Hunter Biden. McConnell was open to that message, said a source familiar with the discussion. Cruz and Sen. Rand Paul (R-KY) later raised the strategy to the broader Senate Republican Conference.”

Bloomberg: “Vladimir Putin outlined a raft of proposed constitutional changes aimed at strengthening the powers of the parliament and other government bodies, fueling speculation that he’s laying the groundwork for keeping power beyond the end of his current term in 2024.”

“The plans, announced unexpectedly at the end of his annual state-of-the-nation speech Wednesday, come as Putin is widely expected to seek a way to hold onto control in some form beyond the constitutional limit at the end of his current term.”

President Trump ranted about what he said was the effect of efficiency standards on appliances like dishwashers, lightbulbs, toilets, and showers, at his rally last night in Milwaukee, Business Insider reports. Trump took aim at “new” dishwashers, and said they meant you sometimes need to wash your dishes “10 times.”

He then asked the crowd: “Anybody have a new dishwasher? I’m sorry for that.” He also lamented what he said were weaker showers in the modern age, adding: “I have this beautiful head of hair, I need a lot of water.”

Neal Katyal: “Americans who have been wondering why President Trump has taken the extraordinary step of trying to block every document from being released to Congress in his impeachment inquiry need wonder no longer. The new documents released Tuesday evening by the House Intelligence Committee were devastating to Trump’s continuing — if shifting — defense of his Ukraine extortion scandal, just days before his impeachment trial is likely to begin in the Senate.”

“These new documents demolish at least three key defenses to which Trump and his allies have been clinging: that he was really fighting corruption when he pressured Ukraine on matters related to the Biden family; that Hunter Biden should be called as a witness at the Senate impeachment trial; and that there’s no need for a real, honest-to-goodness trial in the Senate.”

“Virginia moved to the brink of becoming the crucial 38th state to ratify the Equal Rights Amendment on Wednesday, a momentous victory for many women’s rights advocates even though it is far from certain the measure will ever be added to the U.S. Constitution,” the AP reports.

“ERA advocates say hitting the 38 mark means the amendment will have surpassed the three-quarters of states the amendment needs to be added to the Constitution.”

“Opponents disagree. Court battles are expected to unfold over a long-passed 1982 ratification deadline set by Congress as well as moves by five states that ratified it in the 1970s to rescind their support.”

“The U.S. and China signed a land­mark deal to sharply in­crease sales of U.S. goods and ser­vices to China and help com­pa­nies op­er­at­ing in China by bet­ter pro­tect­ing their in­tel­lec­tual prop­erty and open­ing fur­ther Chi­nese mar­kets, es­pe­cially in fi­nan­cial ser­vices,” the Wall Street Journalreports.

“The eight-part agree­ment acts as a cease-fire in a two-year trade war that has roiled mar­kets glob­ally and cut into global growth. As a con­di­tion of Bei­jing sign­ing the deal, the U.S. agreed to cut tar­iffs on $120 bil­lion in Chi­nese goods by half to 7.5% and to forgo other planned tar­iffs. A host of dif­fi­cult is­sues, which have been the heart of the trade bat­tle, in­clud­ing Chi­nese sub­si­dies to do­mes­tic com­pa­nies and the be­hav­ior of Chi­nese state-owned firms were pushed off to later rounds of talks.”

CNBC: “The Trump administration aims to start negotiating the next piece of the trade agreement before the November 2020 election.”

Michael Flynn moves to withdraw his guilty plea for lying to investigators about his contacts with Russia’s ambassador, in reversal for President Trump’s former national security adviser, the Washington Post reports.

“Attorney General William Barr said he and FBI Director Christopher Wray have agreed to implement stricter procedures for opening counterintelligence probes into presidential campaigns, requiring investigators to get approval from both the attorney general and FBI director before moving forward with future investigations,” CBS News reports.

New York Times: “New evidence shows Jeffrey Epstein sexually abused and trafficked hundreds of young women and girls on his private Caribbean island, some as recently as 2018, significantly expanding the scope of his alleged conduct.”