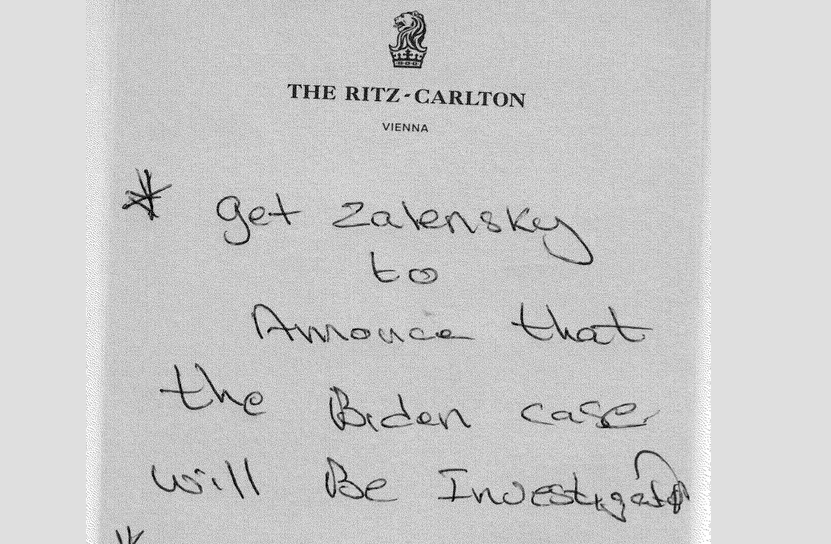 “The material also includes a previously undisclosed May 2019 letter from Giuliani to Ukrainian President Volodymyr Zelensky. In the letter, Giuliani asked for a meeting with Zelensky as the former New York City mayor was pursuing investigations targeting former Vice President Joe Biden.”

“The transmission, which reflects the unfinished nature of the House’s impeachment inquiry, comes ahead of an expected House vote on Wednesday to formally send the impeachment articles to the Senate for a trial.”

Here’s where you can find all the stuff:

“Top Senate Republicans on Monday rejected President Trump’s call for outright dismissal of the impeachment charges against him, but continued to grapple with the shape of the Senate trial that could begin as soon as this week,” the Washington Post reports.

“Most Senate Republicans are eager to stage a trial that ends with Trump’s acquittal and vindication on charges that he abused the power of his office in his dealings with Ukraine and obstructed a subsequent investigation in the House. But over the weekend, Trump urged the Senate simply to dismiss the charges against him — without hearing arguments from House prosecutors or his own legal team.”

“On Monday, senior Republicans said immediate dismissal could not win approval in the chamber, where Republicans hold a 53-seat majority.”

Speaker Nancy Pelosi announced that the House will likely vote Wednesday on sending articles of impeachment to the Senate. She made the announcement at a House Democratic caucus meeting Tuesday. The House managers, the lawmakers who will act as prosecutors in the Senate, have not yet been named.

Senate Majority Leader Mitch McConnell said the Senate is likely to start the impeachment trial next Tuesday, the Wall Street Journal reports. The rules will include a vote on witnesses and documents.

Sen. John Thune (R-SD), the Senate’s majority whip, told Politico that the chamber will try to move USMCA and the War Powers resolution through the chamber this week — before the impeachment trial.

“I presume I’ll be voting in favor of hearing from John Bolton.” — Sen. Mitt Romney (R-UT), quoted by The Hill, on calling witnesses for the Senate impeachment trial.

Politico: “The biggest gamble now is the White House’s decision to put Pat Cipollone, the top attorney, out in front as the face of the president’s defense. While Cipollone is known as a well-respected litigator within conservative circles and a close ally of the president, his chops on TV remain unproven at best.”

Said a former administration official: “I do think we will see a lot of Pat Cipollone for the first time, and that is something everyone is anticipating. I don’t know how much TV Pat has done.”

“President Trump is preparing to divert an additional $7.2 billion in Pentagon funding for border wall construction this year, five times what Congress authorized him to spend on the project in the 2020 budget,” the Washington Post reports.

“The Pentagon funds would be extracted, for the second year in a row, from military construction projects and counternarcotics funding. According to the plans, the funding would give the government enough money to complete approximately 885 miles of new fencing by Spring 2022, far more than the 509 miles the administration has slated for the U.S. border with Mexico.”

“Four Republicans have agreed to vote with Democrats in support of the measure, according to Sen. Tim Kaine (D-VA), who wrote the legislation that seeks to prevent President Trump from further escalating hostilities with Iran,” the Washington Post reports.

Bloomberg: “Worth noting amid recent developments that the administration is giving *another* briefing to senators tomorrow about the Soleimani strike. Kaine and others — Paul, Lee — have cited the treatment of senators at the briefing as a catalyst for action on war powers.”

“As many as 10 Republican senators are considering bucking President Trump on a resolution that would limit his ability to take military action against Iran,” The Hill reports.

“The increasing number is the latest sign of growing GOP frustration over the Trump administration’s justification for the drone strike that killed Iranian Gen. Qassem Soleimani.”

Associated Press: “A Wisconsin appeals court on Tuesday put on hold an order to immediately remove up to 209,000 names from the state’s voter registration rolls, handing Democrats who had fought the move a victory in the battleground state.”

He added: “But awareness is rapidly changing, and I believe we are on the edge of a fundamental reshaping of finance.”

Lev Parnas met Jared Kushner and Ivanka Trump, according to a previously unreleased photo obtained by the Daily Beast.

The photo’s release comes as Parnas is seeking to testify to Congress about his involvement in Rudy Giuliani’s efforts to secure political favors from the government of Ukraine in exchange for White House access.

“With President Trump facing an impeachment trial over his efforts to pressure Ukraine to investigate former Vice President Joseph R. Biden Jr. and his son Hunter Biden, Russian military hackers have been boring into the Ukrainian gas company at the center of the affair,” the New York Times reports.

“The hacking attempts against Burisma, the Ukrainian gas company on whose board Hunter Biden served, began in early November, as talk of the Bidens, Ukraine and impeachment was dominating the news in the United States.”

Washington Post: “Area 1 Security, a California cybersecurity company, said it discovered on New Year’s Eve that the GRU had launched a successful cyber ‘phishing’ campaign against Burisma Holdings, as well as several subsidiaries and partners, so that hackers could gain access to internal email accounts.”

“The GRU is the entity that hacked the servers of the Democratic National Committee and Hillary Clinton’s campaign chairman John Podesta in 2016, releasing their emails that summer and fall at strategically inopportune times for the victims. If the Russian government releases hacked materials from Burisma, how will the media cover it and how would politicians react compared to four years ago? What if the Russians put out fabricated emails that look like they’re authentic but are intended only to sow disinformation about the son of a leading Democratic presidential candidate?”

New York Times: “In the 10 days since it carried out the drone strike that killed Maj. Gen. Qassim Suleimani, the Trump administration has been struggling to draft an after-the-fact narrative to justify it. On Monday, President Trump put an end to that hash of explanations.”

Tweeted Trump: “It doesn’t really matter, because of his horrible past.”

“Until that message on Twitter, the administration had insisted in various ways that General Suleimani, Iran’s most important military official, was planning myriad “imminent” attacks. The unraveling of the explanations accelerated over the weekend after Mr. Trump said four embassies were under immediate threat, a charge that his own administration could not back.”

Politico: “The GOP has tried to stay focused on its game plan to shut down Democratic hopes of locking in witnesses at the outset of the trial, but it’s become increasingly clear the party will face an internal reckoning during the trial as it defends its Senate majority and faces a president who demands complete loyalty.”

Playbook: “The Senate GOP leadership line on witnesses has softened in recent days. They clearly don’t want to be boxed in, and want to see how the process goes and how members feel in a few weeks.”

“We have a very good relationship with Saudi Arabia—I said, listen, you’re a very rich country. You want more troops? I’m going to send them to you, but you’ve got to pay us. They’re paying us. They’ve already deposited $1B in the bank.” — President Trump, in an interview with Fox News.