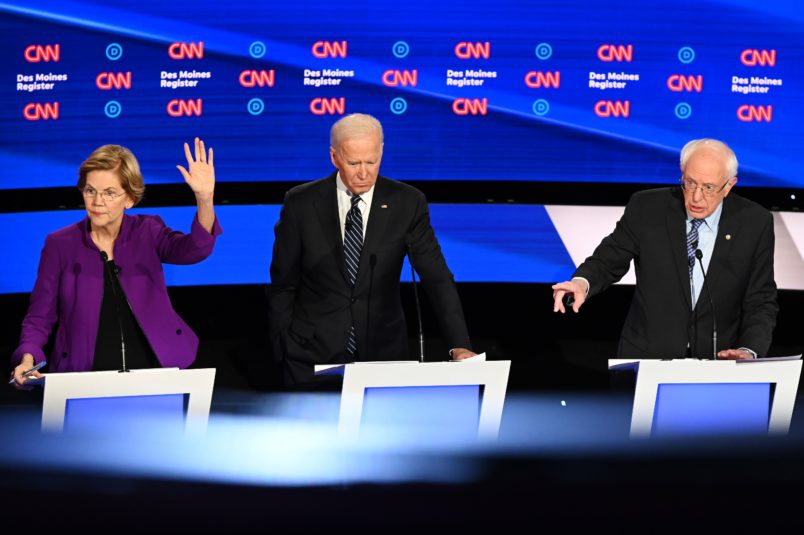 I watched this one. And it was not memorable. No one had a terrible debate. But there were no breakout moments either. The only really memorable moment I can think of is Warren talking about the electability of women versus men, saying that all the men on the stage had collectively lost 10 elections in their lives, while she and Amy Klobuchar collectively have never lost election.

Biden did fine. The Warren and Sanders War never really broke out, though at the end of the debate there does seem to be some real tension between them (see the Handshake Intelligencer post below). Sanders once again stressed his differences with Biden, who finally got to the right answer on Iraq (that he was wrong and it was a mistake). Biden was in do no harm mode, and he succeeded. Buttigieg also was in do no harm mode. Which all makes sense, since all four candidates are basically in four way tie in Iowa, in which case the campaign with the better ground game will win (and you can argue that is Buttigieg and Warren).

Steyer was also muted, probably still surprised at his polling surge but not wanting to say anything to dissipate it. The only person who needed to attack last night, Amy Klobuchar, did so, attacking Warren on health care, but she didn’t really succeed.

Josh Marshall: “Warren has dominated this debate so far. That seems unquestionable to me. But winning on points doesn’t always translate into the race itself. Biden has also had a good night simply because no one is really attacking him and he’s making the points he wants to make. He’s ahead. Maybe not in Iowa but nationwide. So in terms of the race itself I think this debate is going well for both of them.”

Ryan Lizza: “As expected, for the first time in a debate this cycle, foreign policy featured prominently. Presidents have far more latitude over foreign policy — where Congress can be virtually ignored — than any other area of responsibility, and yet it has been given little attention. That’s partly for political reasons. Polls show Biden, the former globe-trotting vice president and Senate Foreign Relations Committee chairman, with an enormous advantage on the issue, and most of his opponents don’t see discussing it as beneficial to them.

“CNN’s Wolf Blitzer did an admirable job teasing out some of the subtle differences that have crystallized among Democrats in the post-Obama world. The party is now divided into two broad camps. The first, represented by Biden, is the Clinton and Obama era establishment that is deeply chastened by the failed military interventions of the last two decades, but that is insistent on preventing the debacle in Iraq and endless war in Afghanistan from turning Democrats into isolationists.

“The other camp, represented by Sanders, is defined by its opposition to the Iraq War, and sometimes struggles to articulate a foreign policy that extends beyond its righteousness about getting the war right.”

“President Trump’s advisers see Sen. Bernie Sanders as their ideal Democratic opponent in November and have been doing what they can to elevate his profile and bolster his chances of winning the Iowa caucuses, according to Republicans familiar with the plans,” the New York Timesreports.

“But their new focus on Mr. Sanders, independent of Vermont, comes at a time the president himself has been closely watching Michael Bloomberg, a late arrival to the Democratic primary race, unnerved by his campaign spending and his suggestion he might spend $1 billion of his own fortune on opposing Mr. Trump, even if he does not emerge as the nominee.”

“It has left the president and his campaign focused on two different candidates in the weeks before Democrats cast their first votes in Iowa — one, a populist running with a grass-roots movement behind him, and the other, a liberal billionaire who could refashion the general election because of his bottomless bank account.”

Michael Kruse: “What I heard from the voters I talked to was mounting angst and indecision. That Sanders and Elizabeth Warren are too far to the left. That Biden is too old. That Pete Buttigieg is too young. That Tom Steyer has too much money. I heard them yearn for a candidate who was just right, squarely in the middle, in the middle of the age range, and of the political spectrum, and of the country itself.”

“And I heard these voters, men and women, self-described moderates interested enough to at least come to watch Klobuchar, 59, praise her for her bipartisan bent and legislative success and the way she’s run this race, and then often stop short of pledging their full support. Almost every conversation I had eventually touched on her gender.”

Sen. Elizabeth Warren “came to raise a concern” with Sen. Bernie Sanders after Tuesday’s Democratic presidential debate, according to Sanders’s campaign manager, who briefly described a mysterious exchange that was captured on live television without sound, the Washington Post reports.

Said Sanders campaign manager Faiz Shakir: “She came to raise a concern, and he said let’s talk about that later.”

Sens. Elizabeth Warren (D-MA) sent a letter to federal regulatory agencies asking them to investigate whether President Trump violated the law by telling guests at his Mar-a-Lago club to expect a “big” response to Iran’s killing of an American contractor in Iraq, Axios reports.

Tom Steyer surged to third place in the Morning Consult tracker of the four early primary and caucus states, his best showing in the poll since he launched his presidential campaign.

A new USA Today/Suffolk poll in Nevada shows Joe Biden leading the Democratic presidential race with 19%, followed by Bernie Sanders at 18%, Elizabeth Warren at 11%, Pete Buttigieg at 8%, Tom Steyer at 8%, Andrew Yang at 4% and Amy Klobuchar at 4%.

“Sen. Elizabeth Warren’s campaign is telling key online supporters that their ‘goal is de-escalation’ and warning backers not to accuse Bernie Sanders of sexism, signaling a desire to move on from a story that has driven a rift between two longtime allies, and within the progressive community, over questions of gender and electability,” BuzzFeed News reports.

The Washington Post has a 20-question quiz that measures which of the Democratic candidates agrees with you the most on some of the biggest flashpoints of the cycle.

“Sen. Elizabeth Warren said that she would begin to eliminate student loan debt on the first day of her administration, using legal tools that would allow her to bypass Congress,” CNBC reports.

“Warren said she will direct her Secretary of Education to begin to ‘compromise and modify’ federal student loans up to $50,000 for 95% of those with outstanding student debt, or 42 million people.”

“Sen. Bernie Sanders won the endorsement of an influential teachers’ union in Nevada on Tuesday morning, a key sign of support in the early voting state where unions have significant political power,” BuzzFeed News reports.

Ron Brownstein: “Sanders’ plan, though all of its costs cannot be precisely quantified, would increase government spending as a share of the economy far more than the New Deal under President Franklin Roosevelt, the Great Society under Lyndon Johnson or the agenda proposed by any recent Democratic presidential nominee, including liberal George McGovern in 1972, according to a historical analysis shared with CNN by Larry Summers, the former chief White House economic adviser for Barack Obama and treasury secretary for Bill Clinton.”

“Sanders’ plan would also increase the size of government far more than any modern Republican president, including Ronald Reagan, has sought to cut it, Summers’ analysis concluded.”