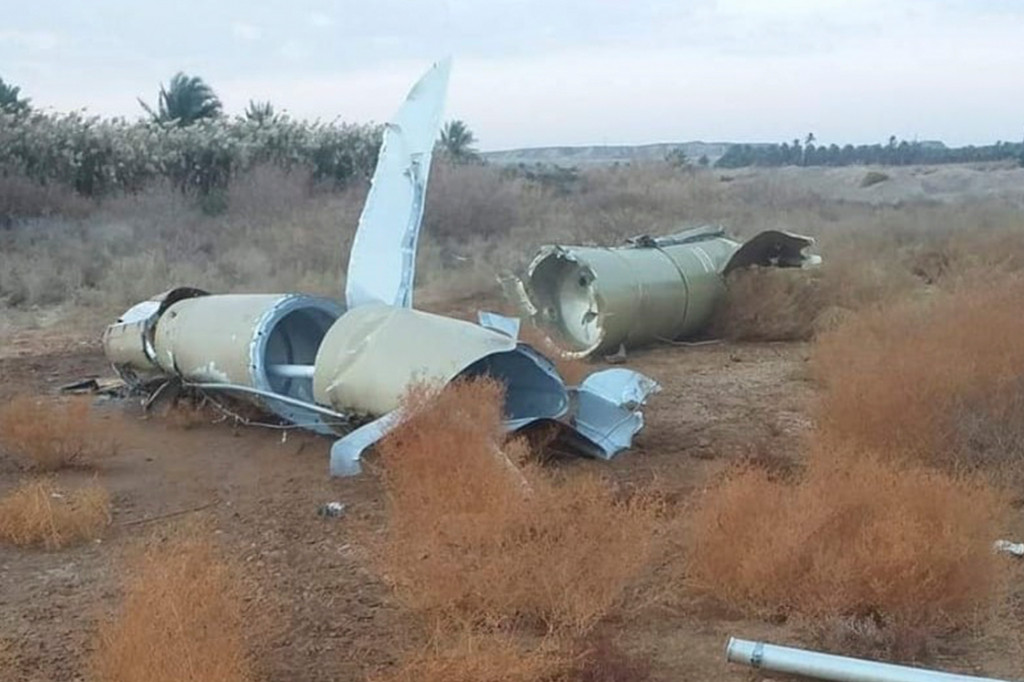 No Americans were injured in the Iranian strikes Tuesday on two Iraqi air bases housing U.S. troops, President Trump said in a White House statement Wednesday. He also said Iran “appears to be standing down” after launching the missiles, and he announced new sanctions against the country.

In the statement, Trump sought to justify last Friday’s drone strike that killed Maj. Gen. Qasem Soleimani, the leader of Iran’s Quds Force. Soleimani, Trump said, was “the world’s top terrorist.” He addressed the justification for the timing of the strike against him. “In recent days, he was planning new attacks on American targets, but we stopped him,” Trump said. “He should have been terminated long ago.”

Trump also announced new sanctions on the Iranian regime, which he said will remain “until Iran changes its behavior,” and called on U.S. allies to follow his lead and abandon the JCPOA, also known as the Iran nuclear deal.

“There is a growing belief among some Trump administration officials that Iran’s missiles intentionally missed areas populated by Americans when they targeted two Iraqi bases housing US troops early Wednesday local time,” CNN reports. Likewise, the Washington Post reports that “the Iranian missile strike on U.S. bases in Iraq on Tuesday was a calibrated event intended to cause minimal American casualties, give the Iranians a face-saving measure and provide an opportunity for both sides to step back from the brink of war.”

USA Today also reports that U.S. officials had advance warning of Iran’s missile assault. “The early warning came from intelligence sources as well as communications from Iraq, which conveyed Iran’s intentions to launch the strike.”

Garrett Graff: “For all the Sturm und Drang about the toxic culture of Twitter, it seems possible that the leaders of both Iran and the United States turned to the social media site Tuesday to help ensure that a tense night in the Middle East didn’t escalate into all-out war.”

“The tweets proved a remarkable modern-day answer to the long-running challenge world leaders have faced in struggling to communicate between nations during unfolding crises—communications necessary both to understand adversaries’ intentions and to telegraph their own.”

“Speaker Nancy Pelosi announced on Wednesday that the House would vote on Thursday to force President Trump to quickly wind down military action against Iran unless he is given explicit authorization from Congress, opening what promised to be a searing debate over presidential war powers,” the New York Times reports.

Rep. Gerry Connolly (D-VA), who just emerged from a briefing on Iran from top Trump administrations officials, called it “sophomoric and utterly unconvincing” adding that he remained “utterly unpersuaded” that the strike on Iranian Gen. Qasem Soleimani was justified, CNN reports.

Apparently the Senate briefing was also disastrous for the Administration, enough so that it has now guaranteed the passage of Pelosi’s measure to limit Trump on Iran.

Republican Sens. Rand Paul and Mike Lee appear to be livid over the case presented. The briefing was “less than satisfying,” an angry Paul told reporters. Lee went farther: “That was insulting,” he said, and “This was probably the worst briefing I’ve seen on military issues in the nine years I’ve been here.” Both senators indicated they would be supporting an upcoming Democratic resolution limiting the administration’s powers to launch military strikes targeting Iran.

“Senior administration officials have begun drafting sanctions against Iraq after President Trump publicly threatened the country with economic penalties if it proceeded to expel U.S. troops,” the Washington Post reports.

“The Treasury Department and White House would likely play a lead role if the sanctions are ultimately implemented… Such a step would represent a highly unusual move against a foreign ally that America has spent almost two decades and hundreds of billions of dollars supporting.”

“Seems like about 20 minutes ago, we were denouncing these people as the ‘deep state’ and pledging never to trust them again without verification. Now, for some reason, we do trust them — implicitly and completely.”

“I don’t give him the benefit of the doubt because he’s lied so much about virtually everything.”

— Joe Biden, in an interview with NBC News, on giving President Trump the benefit of the doubt of justification for assassinating an Iranian general.

This bitch can go fuck off and die too.

“The Trump administration is seeking to delay a Democratic effort to require the Secret Service to disclose how much it spends protecting President Trump and his family when they travel — until after the 2020 election,” the Washington Post reports.

1. She won’t hand over the articles so that McConnell can bury them without hearing from an important witness who has suddenly made clear that he is available.

2. Since McConnell won’t allow a witness with relevant information to testify, the House Intelligence Committee will issue a subpoena to Bolton instead.

3. Pelosi will hold the articles pending the completion of that testimony — and whatever litigation may be necessary to obtain it.

4. The House can reserve the right to pass amended articles of impeachment in response to any new information it obtains.

Until Bolton testifies, either in the House or the Senate, McConnell can’t push through impeachment rules because he won’t have the articles. His role only begins when Pelosi sends them over.

Senate Majority Leader Mitch McConnell said Wednesday that House Speaker Nancy Pelosi has no leverage in determining the rules of the Senate trial of President Trump, as the Democratic leader in the House continues to hold on to the two articles of impeachment, CNN reports.

Said McConnell: “There will be no haggling with the House over Senate procedure. We will not cede our authority to try this impeachment. The House Democrats’ turn is over. The Senate has made its decision.”

“Instead, Trump’s top defenders are more likely to help out in a public relations capacity — including the media appearances that the TV-obsessed president covets — though the White House has made no final decision as it waits for lawmakers to set the timing and parameters of the trial.”

Nikkea Asian Review: “With a ‘phase one’ trade deal due to be signed on Jan. 15, the Trump administration has signaled a tentative and limited rapprochement in its trade war with China, which saw high tariffs placed on Chinese imports and bans on the export of technology products. However, despite those punitive measures and the aggressive messaging coming out of the White House, many of the states and counties that came out for Trump in 2016 have spent the past few years gorging on Chinese money.”

“Their reliance on investment from China only serves to underline how deeply intertwined the world’s two largest economies are, and how the president’s desire to unwind decades of trade imbalances could put him at odds with his own base as he seeks reelection this November.”

“The U.S. Probation Office is recommending that former Rep. Chris Collins (R-NY) spend a year and a day in custody, followed by supervised release and a $200,000 fine, for the insider trading violations that he pleaded guilty to last October,” the Buffalo News reports.

“The proposed sentence is far more lenient than the maximum called for in Collins’ plea agreement – which was four years and nine months.”

A new Pew Research poll found 64% of countries surveyed said they do not have confidence that President Trump will do the “right thing” in world affairs. This sentiment is particularly strong in western Europe, where under 25% of people in Spain, France and Germany say they have confidence in Trump.

The number is lowest in Mexico, where only 8% of people have confidence in Trump to do the “right thing” in world affairs.

Conversely, India and the Philippines have relatively high confidence in Trump, with 56% and 77% confidence, respectively.

Frank Rich: “Whether these enablers joined his administration in earnest, or aided and abetted it from elite perches in politics, Congress, the media, or the private sector, they will be remembered for cheering on a leader whose record in government (thus far) includes splitting up immigrant families and incarcerating their children in cages; encouraging a spike in racist, xenophobic, and anti-Semitic vigilantes; leveraging American power to promote ethnic cleansing abroad and punish political opponents at home; actively inciting climate change and environmental wreckage; and surrendering America’s national security to an international rogue’s gallery of despots.”

“That selective short list doesn’t take into account any new White House felonies still to come, any future repercussions here and abroad of Trump’s actions to date, or any previous foul deeds that have so far eluded public exposure. For all the technological quickening of the media pulse in this century, Trump’s collaborators will one day be viewed through the long lens of history like Nixon’s collaborators before them and the various fools, opportunists, and cowards who tried to appease Hitler in America, England, and France before that. Once Trump has vacated the Oval Office, and possibly for decades thereafter, his government, like any other deposed strongman’s, will be subjected to a forensic colonoscopy to root out buried crimes, whether against humanity or the rule of law or both. With time, everything will come out — it always does.”