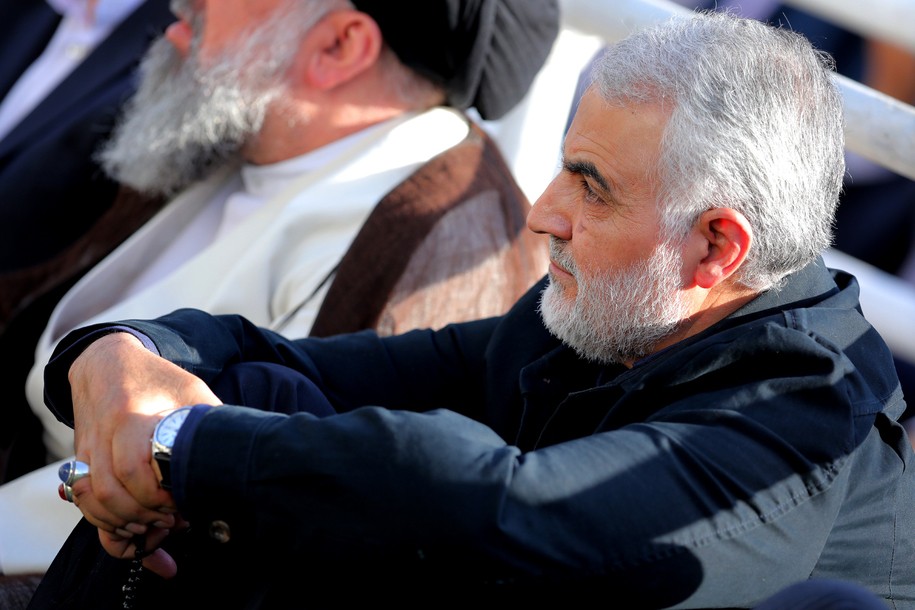 The Washington Post reports the strike was a “dramatic escalation of tensions between the two countries that could lead to widespread violence in the region and beyond.”

“Despite a long period of increasing tension between Iran and the Trump administration, which has vowed a tougher stance on Tehran’s support for proxy groups, the attack against such a key figure in Iran’s security establishment came as a surprise to many analysts, in part because it was seen as likely to ignite a significant Iranian response.”

Josh Marshall: “We now have apparent confirmation that the US mounted a retaliatory raid on a convoy in Iraq (unclear whether it’s a drone attack or missiles) that killed a leader of the Iraqi militia that menaced the US Embassy and critically also killed Qassem Soleimani, commander of Iran’s Revolutionary Guard Corps. There is apparent confirmation of Soleimani’s death on Iraqi TV. I don’t believe we have clear confirmation that this was a US strike. But it’s hard to know who else would be in any position to have done it. It’s a chaotic and developing story. Perhaps new reports will change the picture. But it seems pretty clear that Soleimani is dead.

I hesitate to comment more than simply to say that this is a massive, massive escalation of the confrontation between the US and Iran. Soleimani is a very important figure in Iran. People will disagree about the wisdom of this action or its eventual consequences. But this is a big, big deal – a pandora’s box type escalation with consequences that are hard to predict.”

Newly leaked emails from the Pentagon add to the pile of evidence showing that President Donald Trump himself ordered a freeze on U.S. money destined to Ukraine, which officials have testified was part of an effort to pressure Ukraine to do Trump’s political bidding.

The emails, which were leaked to Just Security, show communications between the Pentagon and the White House Office Office of Management and Budget (OMB). These unredacted emails show Pentagon officials descending into a panic about President Trump’s decision to withhold military aid to Ukraine and the potential legal consequences of the move, according to Just Security.

For example, after a key meeting between the Defense Secretary and Trump on Aug. 30, two days after the aid freeze had become public, OMB political staffer Mike Duffey emailed the Pentagon.

“Clear direction from POTUS to hold,” he said.

The brief, explosive sentence was one of several emails detailing the President’s orders.

On Wednesday, Secretary of State Mike Pompeo suddenly cancelled his trip to Ukraine that was scheduled for Friday.

State Department spokesperson Morgan Ortagus said in an official statement that Pompeo needed to stay in the U.S. “to continue monitoring the ongoing situation in Iraq and ensure the safety and security of Americans in the Middle East.”

“Secretary Pompeo’s trip will be rescheduled in the near future and he looks forward to the visit at that time,” she said.

In an amicus curie brief released Thursday, 205 Republican lawmakers, including 39 senators, asked the Supreme Court to consider whether Roe, the 1973 landmark Supreme Court case protecting the right to an abortion,“should be reconsidered and, if appropriate, overruled.”

They’re weighing in on June Medical Services v. Gee, akey abortion-relatedcase set to be heard in early March determiningwhether the state of Louisiana can require abortion providers to have admitting privileges at a local hospital. Advocates predict that, if the Louisiana law is upheld, two of the remaining three abortion clinics in the state will close down.

Abortion rights advocates sounded the alarm Thursday, warning that the legal battle over Roe is now in full swing. “The anti-choice movement is no longer trying to hide their real agenda,” said Ilyse Hogue, president of NARAL Pro-Choice America, in a statement. “They are gunning to end Roe, criminalize abortion and punish women. If it wasn’t clear why we fought like hell to stop [Supreme Court justice]Brett Kavanaugh’s confirmation before, it should be crystal clear now.”

The holidays were anything but productive for Senate Majority Leader Mitch McConnell (R-KY) and Senate Minority Leader Chuck Schumer (D-NY) to figure out how to manage the Senate impeachment trial.

According to a Washington Post report Thursday, congressional aides said that McConnell and Schumer failed to communicate over the holidays on how to resolve their disagreements regarding the Senate impeachment trial.

The Post noted how the impasse largely hinges on the differences between McConnell and Schumer when it comes to subpoenas and witnesses. While Schumer has insisted that the trial should include subpoenas of certain documents and witnesses who didn’t testify in the House impeachment proceedings — such as acting White House chief of staff Mick Mulvaney and former National Security Adviser John Bolton — McConnell has argued that the Senate shouldn’t decide on witnesses until hearing opening statements from House impeachment managers and President Trump’s attorneys.

McConnell has also signaled he would be fine with no trial at all.

President Trump’s personal attorney, Rudy Giuliani, told reporters earlier this week that he was not only interested in testifying during a possible Senate impeachment trial, but he’d also like to help run the whole show.

The interest is very unlikely to pan out. Giuliani himself is at the center of the impeachment inquiry that was led by Democrats in the House over his efforts to pressure Ukraine to investigate President Trump’s political rivals. Trump himself has indicated that he wouldn’t mind seeing a lengthy trial in the Senate that gives witnesses opportunities to testify and possibly exposes the whistleblower.

President Trump rounded out the year by posting about his “greatest honors” of 2019 on Twitter. But one of the items he listed as an accomplishment was actually a veterans’ health care bill signed into law by former President Barack Obama.

As the Associated Press points out, the Veterans Choice Act was sponsored by Sen. Bernie Sanders (I-VT) and the late Sen. John McCain (R-AZ) and was signed into law by Obama in 2014.

Wall Street Journal reports that “U.S. chief executives are getting worried about a recession.”

“Fear of an economic decline topped the list of their concerns going into 2020, according to a survey from the Conference Board, a business research group. The year prior, recession fears ranked third for U.S. chiefs, though first overall for CEOs around the world—as is again the case for 2020. Going into 2018, the topic was barely a blip in the survey data.

“Last year, growth in gross domestic product globally slipped to 2.3% from 3% in 2018, and executives felt the pressure, said Bart van Ark, chief economist at the Conference Board. Uncertainty around a host of issues, from trade to climate change, has exacerbated their anxiety. …

“The Conference Board projects that global growth will accelerate slightly this year to 2.5%. The organization’s report accompanying the CEO survey warned that executive fears, justified or not, can have consequences for the economy.”