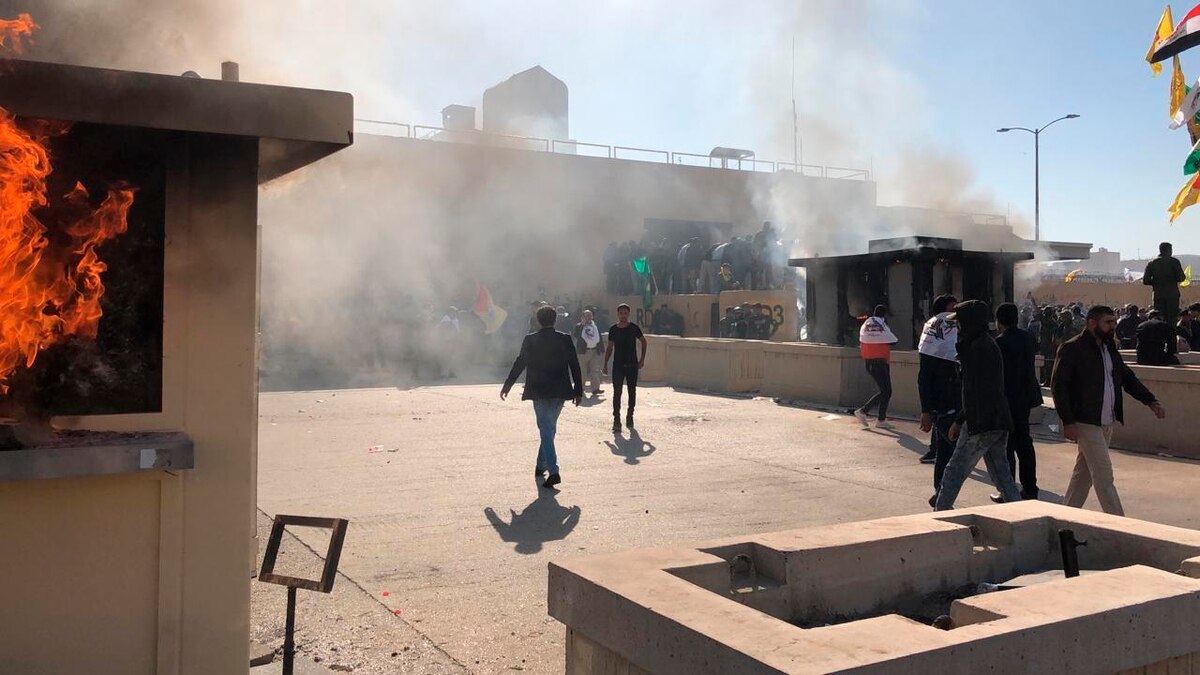 New York Times: “For a second day, demonstrators swarmed outside the United States Embassy in Iraq on Wednesday and troops fired tear gas in an attempt to disperse them, but after a few hours the militia leaders who had organized the demonstration called on the crowd to leave.”

“Unlike on Tuesday, protesters did not get inside the compound. By midafternoon all but about 200 had dispersed, taking their tent poles with them.”

“Prime Minister Benjamin Netanyahu announced Wednesday that he would ask the Israeli parliament to grant him immunity in three criminal cases, tying up further the already lengthy legal proceedings against him in a political system that has been gripped by deadlock for the past year,” the Washington Post reports.

“Netanyahu’s immunity request to the Knesset would shield him from prosecution at least while he remains in office. It also pitches the country’s political establishment against the legal system ahead of an unprecedented third general election in less than a year. That election is set for March 2.”

“In warm-up remarks introducing Senator Elizabeth Warren at campaign rallies, young volunteers often say they are supporting her because of her plan to transform the health care system through a single-payer ‘Medicare for all’ program. It happened in Des Moines on Saturday and Oklahoma City last week, and in western Iowa cities like Clarinda and Council Bluffs on Sunday,” the New York Times reports.

“But Ms. Warren herself is barely speaking of the proposal. After months of attacks from other candidates, and questions and some blowback from both liberals and moderates, the most ambitious and expensive of Ms. Warren’s many plans — and the one most likely to transform the lives of voters — is just a passing mention in her standard stump speech, rarely explored in depth unless a questioner brings it up.”

Politico: “Liberals swooned. The Democratic establishment was on its heels. Powered by small donors and grassroots energy, in late 2003 Iowa seemed Howard Dean’s for the taking.”

“But then came the attacks … The surge became a stall. On caucus day, the Vermont governor came in third and never recovered.”

“Elizabeth Warren is trying to avoid the same fate. While the Warren campaign has stuck to its corruption-centric message, it has noticeably shifted tactics in recent weeks. The Massachusetts senator changed her stump speech and is now taking many more audience questions. She’s drawing sharper contrasts with opponents after months of trying to stay above the fray. There are more big, thematic campaign speeches, and more off the record chats with reporters.”

Josh Marshall: “Lev Parnas is a crook and (one imagines) a liar. But there’s little doubt he did things, witnessed things and knows about things that are highly relevant both to the upcoming impeachment trial and the actions and criminal activity of Rudy Giuliani and President Trump. It is also highly, highly likely that his electronic devices contain evidence that can confirm a significant amount of that and put it beyond Parnas’ say-so, which is of limited value. So Parnas’s efforts to share these records with the House is one of many reasons why President Trump, Mitch McConnell and basically all Republicans want a Senate whitewash trial absolutely as soon as possible.”

Stuart Stevens: “In a long-forgotten era — say, four years ago — such a question would have elicited a very different answer. Though there was disagreement over specific issues, most Republicans would have said the party stood for some basic principles: fiscal sanity, free trade, strong on Russia, and that character and personal responsibility count. Today it’s not that the Republican Party has forgotten these issues and values; instead, it actively opposes all of them.”

“Republicans are now officially the character doesn’t count party, the personal responsibility just proves you have failed to blame the other guy party, the deficit doesn’t matter party, the Russia is our ally party, and the I’m-right-and-you-are-human-scum party. Yes, it’s President Trump’s party now, but it stands only for what he has just tweeted.”

“A party without a governing theory, a higher purpose or a clear moral direction is nothing more than a cartel, a syndicate that exists only to advance itself. There is no organized, coherent purpose other than the acquisition and maintenance of power.”

Chief Justice John Roberts, whose new year will include presiding at a Senate impeachment trial of President Trump as well as leading the Supreme Court, called Tuesday for more focus on civic education at a time “when social media can instantly spread rumor and false information on a grand scale,” the Los Angeles Times reports.

“The Democratic presidential candidates spent the final day of 2019 sharpening their differences as they braced for the final sprint to the Iowa caucuses, with polls showing a fluid and unsettled race five weeks before the first nominating contest,” the Washington Post reports.

“The crossfire reflects the candidates’ urgency to perform well in Iowa at a moment when polls suggest any of the top four candidates could win the state. Each believes a victory on Feb. 3 — when Democrats will caucus at more than 1,000 precinct locations — could provide a critical breakthrough.”

Sen. Roy Blunt (R-MO), a member of the Republican leadership, told KSSZ that he expects President Trump’s impeachment trial will be over by a State of the Union speech scheduled for early February.

“North Korea’s leader, Kim Jong-un, said his country no longer felt bound by its self-imposed moratorium on testing nuclear weapons and long-range ballistic missiles, its official media reported on Wednesday, the strongest indication yet that the country could soon resume such tests,” the New York Times reports.

“North Korea has not conducted a long-range missile test or a nuclear test in more than two years.”

Daily Beast: “Rudy Giuliani is prepared to do more than just testify at President Trump’s upcoming impeachment trial. The former New York City mayor made clear in comments to reporters on Tuesday night that he’s ready to pull out all the stops to defend his client—and that apparently includes giving ‘lectures’ and doing ‘demonstrations.’ Asked if he would testify at the trial, Giuliani appeared unable to settle on a single, coherent answer.”

Said Giuliani: “I would testify, I would, um, do demonstrations. I’d give lectures, I’d give summations. Or, I’d do what I do best, I’d try the case. I’d love to try the case. Well I don’t know if anybody would have the courage to give me the case, but, uh, if you give me the case, I will prosecute it as a racketeering case, which I kind of invented anyway.”

“Pete Buttigieg raised more than $24.7 million in the fourth quarter of 2019, his presidential campaign said on Wednesday, another strong showing that leaves him well positioned to fund a large campaign operation as primary voting approaches,” the New York Times reports.

“In a display of the breadth of his support, Mr. Buttigieg’s campaign said it had now received more than two million donations from over 733,000 individuals since he entered the race.”

Corey Lewandowski announced he will not run for Senate in New Hampshire after flirting with a bid for most of 2019, The Hill reports.

Sen. Susan Collins criticized Republicans and Democrats — citing Sens. Mitch McConnell and Elizabeth Warren by name — for making comments about the Senate impeachment trial of President Trump before it has even started, NBC News reports.

Said Collins: “It is inappropriate, in my judgment, for senators on either side of the aisle to prejudge the evidence before they have heard what is presented to us because the each of us will take an oath, an oath that I take very seriously, to render impartial justice.”