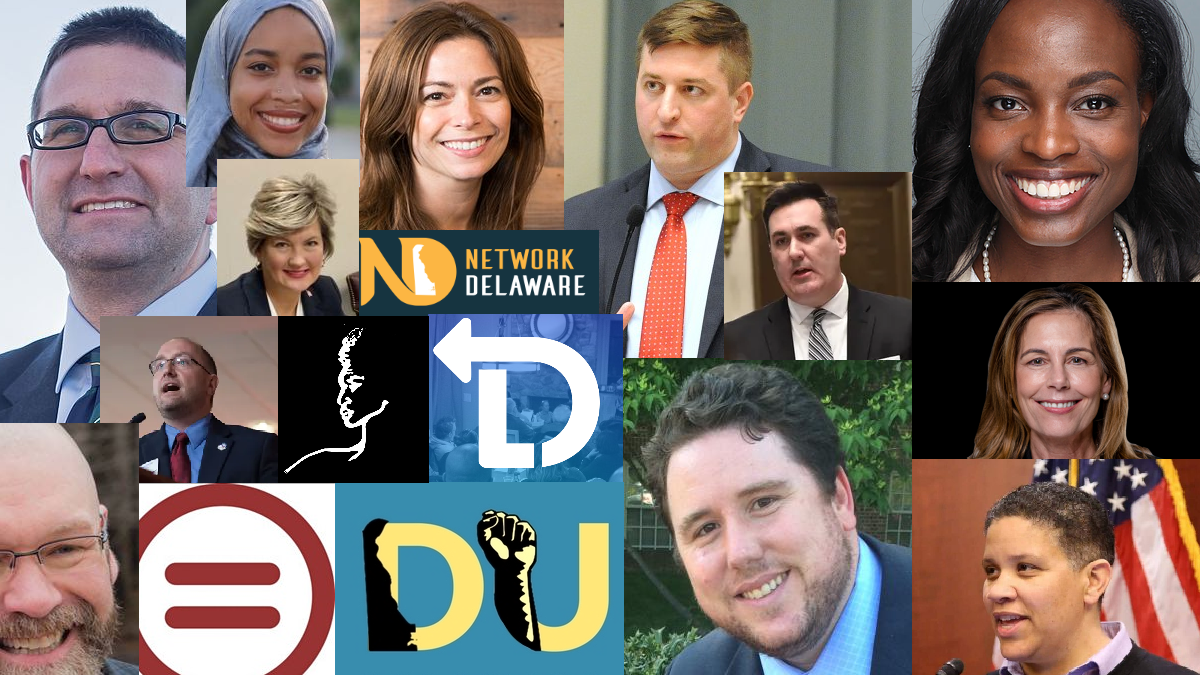 So I guess I should have added Chris Rowe and Nelly Jordan to the Worst of 2019 post. Well, they are both a shoo-in for the Worst of 2020 post. But let’s leave behind the worse of us and now consider the best of us. The next 10 people, group of people or organizations were instrumental in making 2019 as good of a year for progressive, liberal and Democratic priorities as it was. These are the MVPs for all that was accomplished, and in some cases, for all that might or will be accomplished.

He has put forward an environmental agenda that included taking on Waste Management to successfully limit landfill height in the county. Also, it’s just nice to have a New Castle County Executive who is not corrupt or incompetent.

9. Shané Darby and the Mothers in Power: The Black Maternal Health Campaign; the Coalition of 100 Black Women and Eugene Young and the Metropolitan Wilmington Urban League

Eugene Young has been working behind the scenes to refashion the Urban League to focus on building progressive Black political power. He has started the Urban League Fellows Program, which has resulted in a new generation of candidates and organizers.

Shané Darby is running for Wilmington City Council’s 2nd District in 2020, but apart from that, she worked with Network Delaware to tackle a hugely neglected problem in our society: Black Maternal Health. The goal is obvious: to end the needlessly high black mortality rate of mothers and babies & to improve the health of Black mothers & babies through newly created state, county and city regulations and polices. Ms. Darby has built upp an all Black women leadership team that’s getting stuff done and we look forward to see her work with the General Assembly in the new session starting later this month.

And then there is the Delaware Chapter of the Coalition of 100 Black Women. This group has been building a statewide network of Black women through the chapter and also their Mary Ann Shadd and Margaret Rose Henry Civic Engagement Program. If they keep building, you could see a lot of candidates at all levels of government come out of this group.

In terms of being a progressive champion in office, I am not sure anyone in Delaware can match the work of Attorney General Kathy Jennings over the past year. Her work with the General Assembly on the Criminal Justice Reform package, which includes ending cash bail, eliminating sentencing disparities, and removing duplicate crimes that only exist to pile up sentences has been excellent. She has also has done amazing work in opposing the Trump Administration. She is the obvious and leading candidate for Governor in 2024, because it is perhaps too much to hope for that she challenge Carney in 2020.

These four legislators were the prime sponsors of the important gun laws introduced in the first part of the 150th General Assembly session. Only one of those bills, however, passed both chambers and was signed into law, Sean Lynn’s House Bill 63, the Gun Safe Storage Law. Still, I wanted to honor and thank all four legislators for introducing and leading the charge on these bills, and encourage them to keep up their good work in 2020, even in the face of betrayal by their own party leadership.

There are some people out there who grumble and complain about this two exceptional party servants. They say they Erik and Jesse should be spending all of their time catering to the incumbents and protecting them by snuffling out primaries or other threats to the domination of those already in power. They complain about the candidate training sessions that Jesse has organized to provide support to new candidates who may end up challenging incumbents. Their complaints are actually laudable praise of the Dynamic Duo at the head of our Delaware Democratic Party. They have masterfully combined the necessary incumbent service and support with providing a welcoming environment for an activist base that seeks to, at times, challenge the entrenched incumbents and party apparatus. Thank you.

The Progressive Insurgents! All doing the right thing in getting started early to both raise funds and to get themselves known in the district and state. Running for office is daunting in the best of circumstances. Challenging incumbents, even those who are not well liked, is incredibly difficult, so each of these candidates deserved to be thanked and supported. And a special shout out to Jess Scarane’s campaign team (Kirsten Walther, Jamie Rubin, among others) who have expertly launched an unknown into a credible candidate for the U.S. Senate. You all have done a brilliant job so far.

These two people, and their associated organizations, are always in constant competition with each other for the title for best activist progressive grass roots organization in the state. Delaware progressive politics would be desolate without them.

Leftward Delaware is a PAC that focuses on coaching candidates and helping them prepare and execute pre-launch through the election. This year, they are currently coaching 8 candidates (5 are public, 3 more will be by mid-January).

Network Delaware is a nonpartisan nonprofit that focuses on leadership development and getting people involved and engaged. It has an open Candidate School (which many of the new candidates went through), Campaign Management Program, Ella Baker Black Organizers Group, and many other programs. Network Delaware does NOT endorse or support specific candidates, as it is nonpartisan.

Delaware United works to elect progressive political candidates at all levels of Delaware government; works to educate the community about progressive issues and causes, in numerous ways like its Legislative Accountability Report Card; participate in other types of community activism and activities throughout the year.

Another group of Democratic candidates, all phenomenal women, that have wisely started their 2020 campaigns early. I have separated them out from the progressive insurgents because these candidates are not challenging Democratic incumbents, but are either challenging Republican ones or running for open seats. Our party’s success in 2020 is going to depend of the success of these four campaigns, and they all got off to great starts in 2019.

I chose Kerri Evelyn Harris for one simple reason: she has done what I always pray all progressives would do, even when and especially when they lose campaigns. Losing a first battle does not mean you lose the war, especially when you stay engaged and work to change the party. Kerri did that and successfully campaigned to become our Democratic National Committeewoman.

When I was preparing this list, I sought out nominations from various politicos throughout the state, and the response I got from fellow state Executive Committee Member Jack Bucchioni:

“Yes, many progressive’s think I’m a grandpa who is too conservative and conservatives think I’m too progressive (Labels sometimes don’t apply to a child of the 60s; still out here fighting the war trying to make a difference.).  Having worked with Kerri Evelyn a lot this past year on numerous Sussex County advocacy causes I have developed a real respect for her work ethic, authenticity, and ability to bring the hard rain when needed to amplify any overlooked justice. Change is coming as the tipping point is near down here with the rapid  influx of “Come-Heres” moving in. […]

Kerri Evelyn Harris is a very competent leader who always keeps the people first and foremost; that is the key that Sussex needs for the next chapter. For the record,  I believe Kerri Evelyn is the future of Delaware’s Democratic Party; she get’s it and gets things done. Kerri Evelyn is my kind of champion, she works very hard and never wants the limelight; rare in today’s political world for sure.”