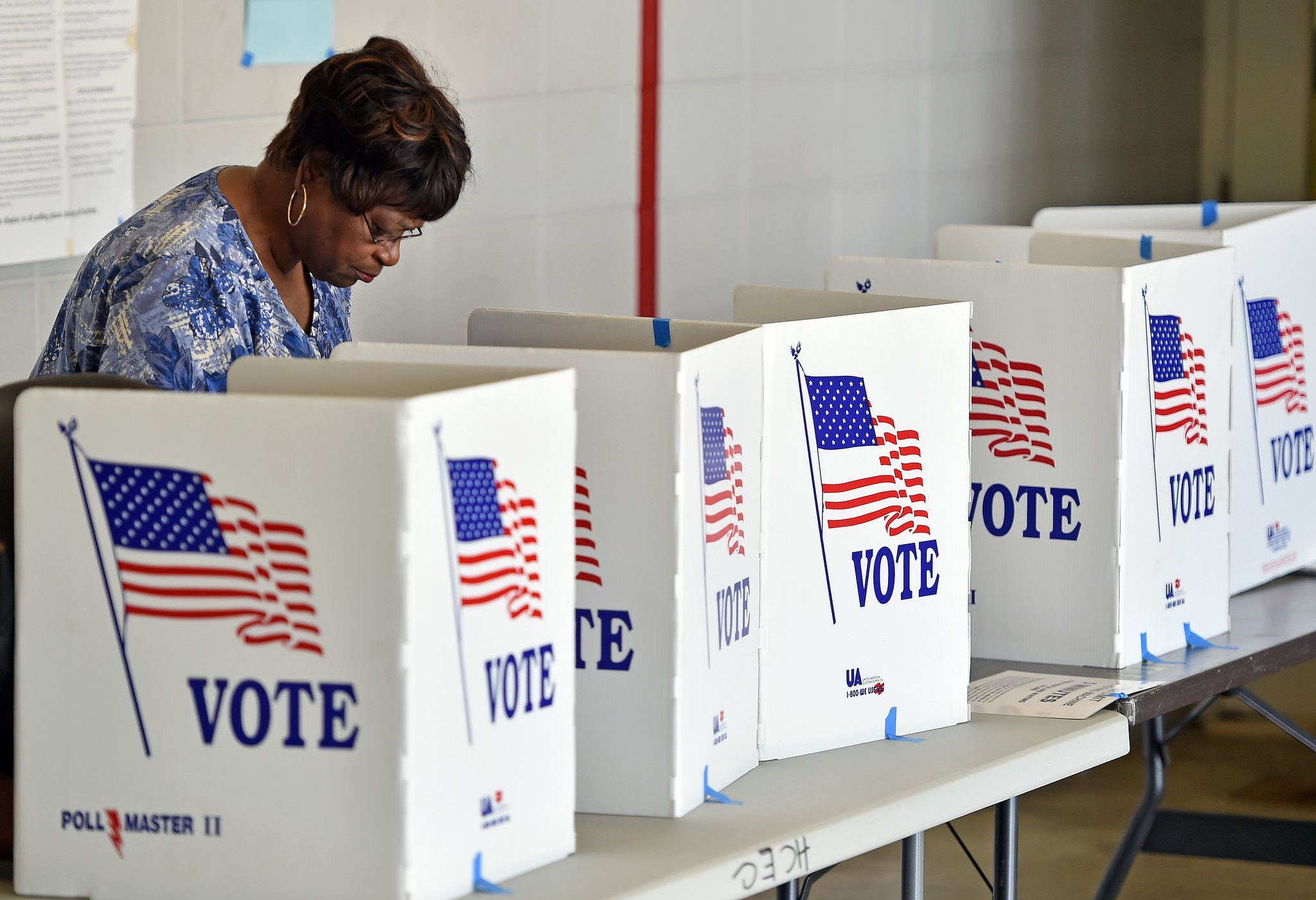 “One of President Trump’s top re-election advisers told influential Republicans in swing state Wisconsin that the party has ‘traditionally’ relied on voter suppression to compete in battleground states but will be able to ‘start playing offense’ in 2020 due to relaxed Election Day rules,” according to an audio recording of a private event obtained by the Associated Press.

Said Justin Clark: “Traditionally it’s always been Republicans suppressing votes in places. Let’s start protecting our voters. We know where they are… Let’s start playing offense a little bit. That’s what you’re going to see in 2020. It’s going to be a much bigger program, a much more aggressive program, a much better-funded program.”

“Senior Trump administration officials in recent days threatened a presidential veto that could have led to a government shutdown if House Democrats refused to drop language requiring prompt release of future military aid for Ukraine,” the Washington Post reports.

“The language was ultimately left out of mammoth year-end spending legislation that passed the House and Senate this week ahead of a Saturday shutdown deadline. The White House said President Trump would sign the $1.4 trillion package before midnight.”

Jeff Flake: “To my former Senate Republican colleagues, I don’t envy you.”

“It might not be fair, but none of the successes, achievements and triumphs you’ve had in public office — whatever bills you’ve passed, hearings you’ve chaired, constituents you have had the privilege of helping — will matter more than your actions in the coming months.”

“President Trump is on trial. But in a very real sense, so are you. And so is the political party to which we belong.”

“Continued deforestation and other fast-moving changes in the Amazon threaten to turn parts of the rainforest into savanna, devastate wildlife and release billions of tons carbon into the atmosphere,” the Washington Post reports.

“Combined with recent news that the Arctic permafrost may be beginning to fill the atmosphere with greenhouse gases, and that Greenland’s ice sheet is melting at an accelerating pace, it’s the latest hint that important parts of the climate system may be moving toward irreversible changes at a pace that defies earlier predictions.”

Said scientists Thomas Lovejoy and Carlos Nobre: “The precious Amazon is teetering on the edge of functional destruction and, with it, so are we. Today, we stand exactly in a moment of destiny: The tipping point is here, it is now.”

Christianity Today, the flagship Evangelical magazine founded by the Rev. Billy Graham, called for President Trump to be removed from office.

“We have reserved judgment on Mr. Trump for years now. Some have criticized us for our reserve. But when it comes to condemning the behavior of another, patient charity must come first. So we have done our best to give evangelical Trump supporters their due, to try to understand their point of view, to see the prudential nature of so many political decisions they have made regarding Mr. Trump.”

“To use an old cliché, it’s time to call a spade a spade, to say that no matter how many hands we win in this political poker game, we are playing with a stacked deck of gross immorality and ethical incompetence. And just when we think it’s time to push all our chips to the center of the table, that’s when the whole game will come crashing down. It will crash down on the reputation of evangelical religion and on the world’s understanding of the gospel. And it will come crashing down on a nation of men and women whose welfare is also our concern.”

President Trump went after Christianity Today in a series of tweets after it published an editorial calling or his removal from office.

Said Trump: “A far left magazine, or very ‘progressive,’ as some would call it, which has been doing poorly and hasn’t been involved with the Billy Graham family for many years, Christianity Today, knows nothing about reading a perfect transcript of a routine phone call and would rather … have a Radical Left nonbeliever, who wants to take your religion and your guns, than Donald Trump as your President.”

President Trump continued to tweet about the Evangelical magazine calling for his removal from office, which is how you can tell that he is both infuriated and scared to death. He knows if even a fraction of the evangelical vote leaves him, he is done. He needs their complete devotion and 100% turnout.

Said Trump: “I guess the magazine, Christianity Today, is looking for Elizabeth Warren, Bernie Sanders, or those of the socialist/communist bent, to guard their religion. How about Sleepy Joe? The fact is, no President has ever done what I have done for Evangelicals, or religion itself!”

— Speaker Nancy Pelosi, in an interview with the Associated Press.

The day after the House impeachment vote, Sen. Lindsey Graham (R-SC) told Fox News that President Trump was “mad as hell that they would do this to him and now deny him his day in court.”

Former Kentucky Gov. Matt Bevin (R) “defended his controversial last-minute pardon of a man convicted of raping a 9-year-old, saying there was no physical evidence of her abuse,” the Louisville Courier-Journal reports.

Said Bevin: “There was zero evidence… Both their hymens were intact. This is perhaps more specific than people would want, but trust me. If you have been repeatedly sexually violated as a small child by an adult, there are going to be repercussions of that physically and medically.”

“Rep. Adam Schiff (D-CA) wants to see the documents being concealed by the White House even more than he wants to hear from the list of current and former aides who followed President Trump’s order not to testify during the investigation that led to his impeachment,” the Washington Post reports.

Said Schiff: “The few messages we did get were remarkably incriminating. So you can only imagine, if this is what the small sample of documents that we have shows, just how damning many of the other documents the administration refuses to turn over may be.”

Former National Security Adviser John Bolton, who referred to the White House pressure campaign on Ukraine as a “drug deal,” declined to comment about impeachment during an interview with NPR.

Said Bolton: “There’s obviously a lot swirling around in that department, including some litigation that could affect my status, so I think although I have a lot to say on the subject, the prudent course for me is just to decline to comment at this point.”

Associated Press: “A significant launch or test would mean the end of North Korea’s self-imposed moratorium and raise tensions in the region. It would also be a major blow to one of the Trump administration’s major foreign policy initiatives: the drive to get North Korea back to negotiations to eliminate its nuclear weapons and missiles.”

“Earlier this month, the North conducted what U.S. officials say was an engine test. North Korea described it as ‘crucial’ and experts believe that it may have involved an engine for a space launch vehicle or long-range missile. Officials worry that it could be a prelude to the possible launch of an intercontinental ballistic missile in the coming days or weeks.”

A report produced for the Washington state legislature found state Rep. Matthew Shea (R) “participated in an act of domestic terrorism against the United States” and represents a threat of political violence.

The report also said Shea “advocated the replacement of U.S. democracy with a theocracy and the killing of all males who do not agree.”

The Spokane Spokesman-Review reports Republicans expelled Shea from their caucus.

Shea responded with characteristic defiance, writing on Facebook: “Like we are seeing with our President this is a sham investigation meant to silence those of us who stand up against attempts to disarm and destroy our great country. I will not back down, I will not give in, I will not resign. Stand strong fellow Patriots.”

Politico: “Acting White House chief of staff Mick Mulvaney is widely expected to leave his current position once the Senate wraps up its impeachment trial and the intense scrutiny of the West Wing settles down.”

“Trump allies and White House aides, who have been nudging the president in recent weeks to find a new leader for the team as it delves into a crucial reelection campaign, have been circulating lists of potential replacements for weeks.”

“Mulvaney no longer wields much control over White House staff. Lately, he has been left out of major personnel and policy decisions, and he is not driving the strategy on impeachment even though he occupies what is historically the most powerful job in the West Wing.”

“The federal prosecutor scrutinizing the Russia investigation has begun examining the role of the former CIA director John Brennan in how the intelligence community assessed Russia’s 2016 election interference,” the New York Times reports.

“John Durham, the United States attorney leading the investigation, has requested Mr. Brennan’s emails, call logs and other documents from the CIA… He wants to learn what Mr. Brennan told other officials, including the former FBI director James Comey, about his and the CIA’s views of a notorious dossier of assertions about Russia and Trump associates.”