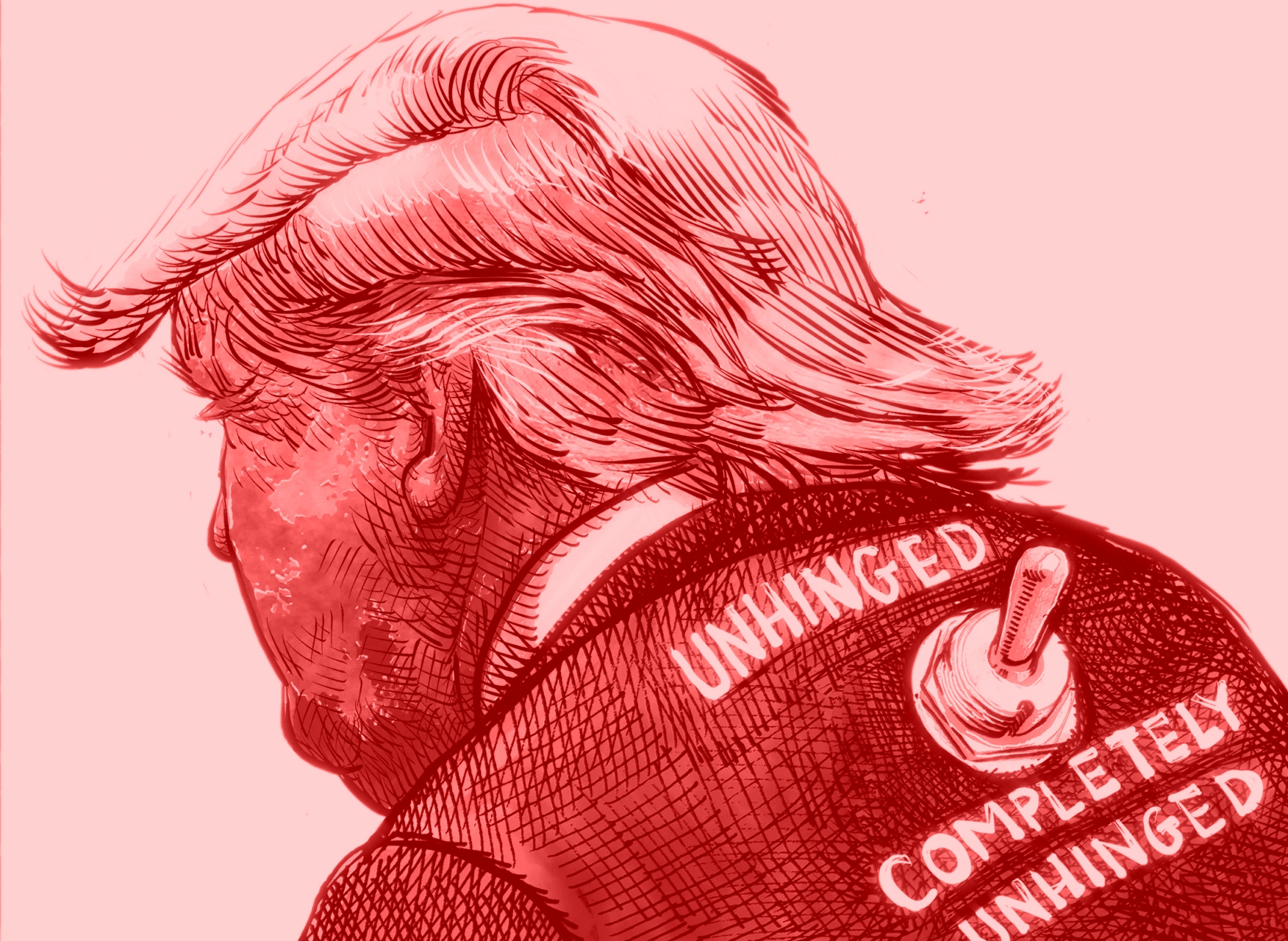 Said Trump: “More due process was afforded to those accused in the Salem Witch Trials.” The letter appears to have been written by the president himself.

Jonathan Chait: “If a juror in Trump’s coming impeachment trial had no other evidence except this letter, it would provide ample grounds for impeachment. Trump openly denies the Congress’s constitutional prerogative, and makes plain his mental unfitness for the job.”

On Tuesday, House Speaker Nancy Pelosi (D-CA) said President Donald Trump’s deranged tirade about impeachment that he had sent her earlier in the day was “really sick.” Pelosi initially told CNN correspondent Manu Raju that she had “no reaction” to Trump’s “ridiculous” letter.

“No reaction? Why not?” Raju asked. “I haven’t really fully read it,” the Democratic leader responded. “We’ve been working.” “I’ve seen the essence of it though, and it’s really sick,” she added.

“A majority of House lawmakers have said they plan to support at least one article of impeachment against President Trump,” the Washington Post reports. “No Republicans have said they will break ranks in the full House vote, which is expected Wednesday.”

Of the 31 House Democrats representing districts that President Trump won in 2016, just two have not yet signaled how they will vote on the impeachment resolution, the Washington Post reports. The overwhelming majority — 27 of them — will vote to impeach the president tomorrow, while two have indicated they will oppose the resolution.

“A contingent of Democratic House members from Republican-leaning districts announced one by one Monday that after weeks of extraordinary pressure, they have decided to vote to impeach President Trump, as the House hurtles toward historic action later this week,” the Washington Post reports. “Monday’s announcements dealt a blow to Trump and his allies, who had been encouraging Democrats to defect to bolster their depiction of impeachment as a crusade by extremist liberals.”

Playbook: “There are a few ways to look at this. If you take these lawmakers at their word, they are so disgusted with Trump’s behavior that they need to vote to remove him from office. It’s their duty. And perhaps so.”

“But Congress is a political institution, where even matters of conscience are judged for their political wisdom. First of all, take note that the announcements all came within hours of each other — a sign of unity among a group of vulnerable politicians. They’re leaping together.”

Rep. Tulsi Gabbard (D-HI) is calling for President Trump’s censure on the eve a full House vote Wednesday on the articles of impeachment, ABC News reports. She did not say whether she would vote to impeach the president. If she fails to vote for impeachment, her presidential campaign is over, though, how would we tell?

Rep. Jared Golden (D-ME) told the Bangor Daily News that he will vote to impeach President Trump for abusing the power of his office, but not on a second impeachment that charges the Republican president with obstructing a congressional probe. Which makes no sense, logically or politically. But whatever.

“For months, Rep. Jeff Van Drew, a freshman Democrat from New Jersey, has publicly trashed the impeachment process, calling it unfair, unfounded, and deeply damaging to the country—but privately, this soon-to-be Republican had a much different reasoning,” the Daily Beast reports.

“Behind closed doors, Van Drew has told colleagues that the president was stupid and mentally unstable—and that his opposition to impeachment stemmed from his belief that impeaching Trump would ensure his re-election.”

Said McConnell: “Those who have been eagerly hoping for impeachment are starting to scramble.”

Politico: “If the process plays out as everyone believes it will, impeachment will end with an acquittal in the Senate, and the House’s efforts to protect the integrity of the 2020 election will have proved counterproductive: President Trump, claiming a ‘full exoneration,’ could be emboldened to engage in misconduct similar to or even worse than his interactions with Ukraine.”

“But there is a way out of this mess that would let the House impeach him—while allowing the Senate to only censure Trump, rather than having to vote to convict or acquit him. The House could express its disapproval of Trump through an impeachment vote, and the Senate, through censure rather than a trial, could embrace, even enhance, the House’s message. Yes, Trump would stay in office. But because both chambers of Congress would be on the record in officially condemning his conduct, there is a decent chance this approach might deter Trump from similar elections abuse.”

Schiff argued the testimony “raises profound questions” about what Pence knew of Trump’s efforts to push Ukraine to open investigations into the Bidens.

Rudy Giuliani told CNN that President Trump has been “very supportive” of his continued efforts to dig up dirt on Democrats in Ukraine, including his most recent trip to the Eastern European country. Said Giuliani: “We’re on the same page.”

Washington Post: “The story that appeared on The Hill website on March 20 was startling. Marie Yovanovitch, the American ambassador to Ukraine, had given a ‘list of people whom we should not prosecute’ to Ukraine’s prosecutor general, Yuriy Lutsenko, according to a write-up of an interview Lutsenko gave to the conservative columnist John Solomon.”

“Five days later, an image of that purported list appeared in a post on the website Medium and on a number of other self-publishing platforms in locations as disparate as Germany, South Africa and San Francisco. In less than a week, the Medium essay had been translated into Spanish and German and posted to other websites.”

“Now, a social media analysis firm, Graphika, has traced those posts to a Russian disinformation campaign — in the first evidence that a network of accounts involved in spreading disinformation before the 2016 election also participated in circulating the false claims about Yovanovitch that led earlier this year to her recall from the U.S. embassy in Kyiv.”

CNN: “Under the plain terms of the U.S. Constitution and Senate rules, Roberts could wield a powerful gavel and rule on evidence and witnesses. Senate impeachment canon, dating to 1986, says the presiding officer ‘may rule on all questions of evidence.’ The chief justice’s decision would stand unless overruled by a formal majority vote of the full Senate.”

“Roberts could, if he were so inclined, assume an outsized role in Trump’s fate.”

“But that would be a break from precedent and contradict Roberts’ own reserved manner. His predecessor in the role, Chief Justice William Rehnquist who oversaw the 1999 Bill Clinton impeachment trial, refused to assert great authority, saying in one episode he would claim authority only when ‘its exercise were clearly warranted.’”

Playbook: “The House is going to vote on a bill today to keep government funded through September 2020, and change a host of unrelated policies. The bill came out Monday. It will get a vote tonight. The number of issues handled in this bill is stunning. It contains major changes in health care policy, extends flood insurance, reauthorizes the Export-Import Bank for seven years, extends the terrorism insurance program and reauthorizes money to rebuild the Kennedy Center, and so much more.”

“And guess what: Late Monday night the House decided to pair a massive package of tax extenders with this bill.”

The Wall Street Journal has more on what’s in the bill.

“The budget deal unveiled by lawmakers this week allocates up to $5.7 billion in Medicaid funds for the island over two years — instead of $12 billion over four years that Republican and Democratic leaders on two key congressional committees had endorsed after months of negotiating a long-term financial path for Puerto Rico.”

Walter Shapiro: “If there was a moment that defined the decade, it was a Capitol Hill meeting in early September 2016 when top Obama administration officials (including Homeland Security Secretary Jeh Johnson and FBI director James Comey) briefed congressional leaders on the Russian hacking of the election.”

“But Senate Majority Leader Mitch McConnell, in particular, challenged the intelligence findings and refused to sign a joint letter singling out Vladimir Putin…”

“In many ways, McConnell is the Person of the Decade when it comes to the destruction of democratic norms. From cynically depriving Merrick Garland of a confirmation vote for a seat on the Supreme Court to turning the Senate into a no-dissent rubber stamp for a Republican president, McConnell symbolizes the vicious partisanship of a dismal decade.”

Axios: “The Trump campaign and RNC combined took in more than $10m in small-dollar donations last week alone, as the House Judiciary Committee adopted two articles of impeachment, according to a campaign official.”

“In the 72 hours that followed House Speaker Nancy Pelosi’s initial September announcement that she would move forward with the impeachment inquiry, Republicans raised $15m.”

“Since the impeachment inquiry began, an official said, a quarter of Trump rally registrants are self-described Democrats or independents, and about the same proportion are low-propensity voters.”

The Mormon Church amassed $100 billion in tax-free funds “intended for charitable purposes,” a whistleblower claimed in a report to the Internal Revenue Service obtained by the Washington Post.

Tax the shit out of them.

Josh Marshall: ” Stunning news out of federal court this afternoon: that mystery million dollars that Lev Parnas got from aboard was money from Dmitry Firtash, the former Manafort business partner and Putin-aligned oligarch who is currently fighting extradition to the United States to face bribery charges. We’ve had a lot of hints to date that Firtash was the guy funding Rudy’s team in Ukraine. But this seems to confirm it. Where’s the money for all of this coming from? Why is Giuliani working for free? Why did his fellow Trump lawyers and Fox news regulars DiGenova and Toensing get over a million for a few months of legal work for Firtash. This news tells us what many have suspected: the President’s legal defense – Giuliani, Parnas, Fruman, DiGenova and Toensing and the rest of the collusion squad – is being funded by Firtash.”

Former Trump campaign aide Rick Gates was sentenced to 45 days in prison — to be served on weekends — on Tuesday in a Washington, D.C. federal court, Axios reports. He also received three years of probation and a $20,000 fine.

William Webster: “The privilege of being the only American in our history to serve as the director of both the F.B.I. and the C.I.A. gives me a unique perspective and a responsibility to speak out about a dire threat to the rule of law in the country I love. Order protects liberty, and liberty protects order. Today, the integrity of the institutions that protect our civil order is, tragically, under assault from too many people whose job it should be to protect them.”

“A small group of President Trump’s fiercest conservative critics, including the husband of the president’s own chief adviser, is launching a super PAC designed to fight Trump’s reelection and punish congressional Republicans deemed his ‘enablers,’” CNBC reports.

“The new organization, known as the Lincoln Project, represents a formal step forward for the so-called Never Trump movement, which has been limited largely to social media commentary and cable news attacks through the first three years of Trump’s presidency. Organizers report fundraising commitments exceeding $1 million to begin, although they hope to raise and spend much more to fund a months-long advertising campaign in a handful of 2020 battleground states to persuade disaffected Republican voters to break from Trump’s GOP.”

Paul Manafort has been hospitalized for a “cardiac event” while serving his over seven year sentence for charges related to special counsel Robert Mueller’s investigation, ABC News reports.

“Manafort was scheduled for a court appearance on Wednesday but his attorney was informed that he would not be appearing.”

“The Trump administration has said it does not consider the mass killings of Armenians in 1915 to be a genocide, contradicting a unanimous vote by the U.S. Senate,” the BBC reports.