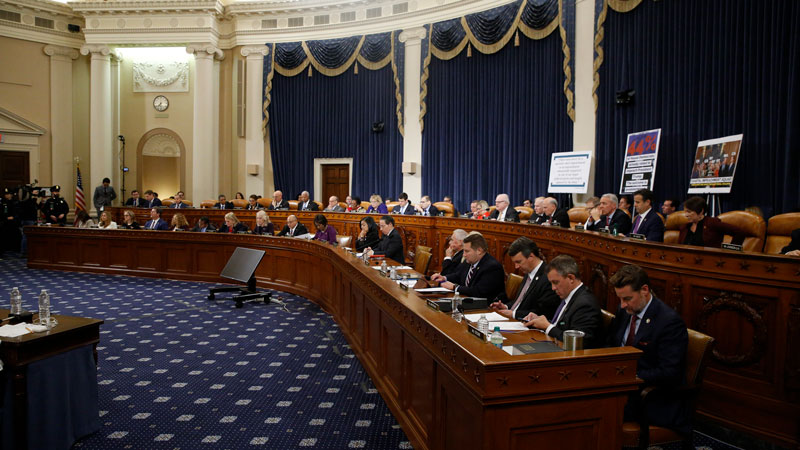 New York Times: “The partisan result and the contentious debate that preceded it were harbingers of a historic proceeding and vote on the House floor, expected next week, to impeach Mr. Trump, whose nearly three-year tenure has exacerbated the nation’s political divisions. Mr. Trump, who insists he did nothing wrong, is now only the fourth American president in history to face impeachment by the House of Representatives for ‘high crimes and misdemeanors’ and possible conviction and removal from office by the Senate.”

“The Supreme Court agreed Fri­day to con­sider Pres­i­dent Trump’s le­gal ef­forts to block con­gres­sional and crim­i­nal sub­poe­nas seek­ing ac­cess to his fi­nan­cial records, in a trio of block­buster cases that could have last­ing im­pli­cations for the pres­i­dency,” the Wall Street Journal reports.

Associated Press: “The justices are poised to issue decisions in June, amid Trump’s bid for a second term. Rulings against the president could result in the quick release of personal financial information that Trump has sought strenuously to keep private. The court also will decide whether the Manhattan district attorney can obtain eight years of Trump’s tax returns as part of an ongoing criminal investigation.”

Juts back from his trip to Ukraine, Rudy Giuliani was spotted arriving at the White House this morning before the House Judiciary Committee approved two articles of impeachment.

New York Times: “Mr. Zelensky, still deeply dependent on American assistance, has been signaling, in hardly subtle fashion, that he and his officials will not assist in the impeachment process, keeping quiet in particular about the fact that his government knew weeks earlier than it has publicly acknowledged that Mr. Trump had frozen nearly $400 million in military aid to Ukraine.”

“President Trump’s senior aides have further restricted the number of administration officials allowed to listen to the President’s phone calls with foreign leaders since his July 25 call with Ukraine’s President was revealed and became the centerpiece of the impeachment inquiry,” CNNreports.

“Transcripts of Trump’s calls with world leaders are also disseminated to a far smaller group of people inside the White House, those administration sources say, continuing an effort to limit the number of people with insight and information about the conversations.”

“Jeremy Corbyn, the socialist leader of the opposition Labour Party, announced Friday he will step down after election results showed the party not only failed to oust the ruling Conservatives but also lost a swath of formerly dependable seats,” NBC News reports.

London Playbook: “Any prospect of Britain remaining in the EU has gone… Johnson now has free rein to recast Britain’s entire relationship with Europe as he sees fit… Johnson will also have the power to reshape domestic policy over the coming years without restraint from his party or from Parliament.”

“The Conservatives are likely to rule Britain for the whole of the 2020s at least.

Majority Leader Mitch McConnell (R-KY) told Fox News that Republicans would be in sync with the White House counsel when impeachment proceedings against President Trump advance to the Senate.

Said McConnell: “I’m coordinating with the White House counsel. There will be no difference between the president’s position and our position as to how to handle this, to the extent that we can.”

Greg Sargent: “It has often been observed that one of President Trump’s biggest allies in the impeachment battle is Fox News — that if Richard Nixon had enjoyed the benefit of such a powerful purveyor of propaganda, he wouldn’t have been driven from office.”

“You could not ask for a clearer indication of this than the interview that Senate Majority Leader Mitch McConnell just gave to Sean Hannity about Trump’s coming trial.”

“The interview showcases how Trump’s propagandists have succeeded in creating a universe that is as hermetically sealed off from this scandal’s widely and firmly established set of facts as one half of a divided cell is from the other.”

Playbook: “The 14-hour Judiciary Committee hearing Thursday taught us precious little new about the substance of the impeachment of President Trump. But it put on vivid display the Republicans’ blood lust for Joe Biden and his son Hunter, undermining a central thesis of the former VP’s campaign: that he’s uniquely qualified to bring down Washington’s fevered partisanship.”

“In fact, Thursday showed that Biden himself might be the fever.”

“The modern-day congressional Republican Party has tended to focus its energy on people as emblematic of perceived ills — Hillary Clinton and Eric Holder, for example. And, at the moment, they have their eyes transfixed on Biden. The majority of congressional Republicans say what House Minority Leader Kevin McCarthy said at our Playbook event Thursday: Trump would beat anyone in the Democratic field. (Data doesn’t always agree with them.) But should Biden make it to the White House — or even if he doesn’t — Republicans say they’ll use any sliver of power they have to investigate, poke and probe Biden and his son.”

This is not specific to Biden. It happened to Bill & Hillary, Al Gore, Barack Obama and Nancy Pelosi. Whomever our leader is, Republicans go nuts about them.

Politico: “The GOP is uniting around a strategy that could quickly acquit President Donald Trump of articles of impeachment while giving them the opportunity to call witnesses later in the trial if Republicans and the president are not satisfied with how things are going, according to interviews with nearly a dozen Republican senators on Thursday.

“Heading into the trial, Republicans’ plan would be to call no witnesses and simply allow House Democrats and then the president’s attorneys to make their case before the public. After that, the Senate would consider calling people either for live testimony or closed-door depositions. It’s a plan they believe will insulate the Senate GOP from pressure to call a host of controversial witnesses — which the caucus would struggle to do for political and procedural reasons alike — while putting Trump on track to be cleared before the end of January.”

Los Angeles Times: ““More than $20 million of the Pentagon aid at the center of the impeachment fight still hasn’t reached Ukraine. The continued delay undermines a key argument against impeachment from President Trump’s Republican allies and a new legal memo from the White House Office of Management and Budget.”