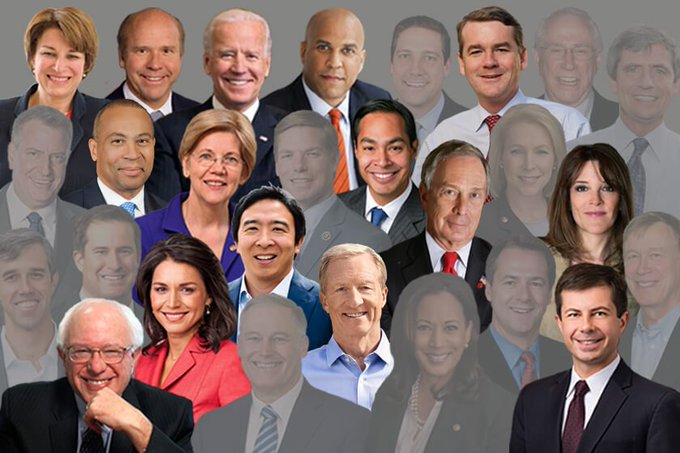 FiveThirtyEight launched its polling averages for the 2020 Democratic primaries, showing Joe Biden leading nationally with 26.2%, followed by Bernie Sanders at 17%, Elizabeth Warren at 14.9% and Pete Buttigieg at 9.6%.

However, the polling averages in the early states are quite different: Buttigieg leads in Iowa by 1.1% and in New Hampshire by .8%, while Biden leads in Nevada by 6.7% and in South Carolina by 21.6%.

Nate Cohn: “A variety of changes make the 2020 Democratic calendar more like a national primary. There are fewer caucuses and fewer election nights, and the primary season ends earlier. Increasingly, the calendar features a handful of big primary nights, each relatively representative of the country, at least compared with previous years.”

A new BlackPAC poll finds Joe Biden leading the Democratic presidential field among black voters with 44%, followed by Bernie Sanders at 15%, Elizabeth Warren at 11% and Cory Booker at 5%.

A new Charleston Post & Courier poll in South Carolina finds Joe Biden leading the Democratic field with 27%, followed by Bernie Sanders at 20%, Elizabeth Warren at 19%, Pete Buttigieg at 9%, Cory Booker at 5%, Tom Steyer at 5% and Tulsi Gabbard at 4%.

“A labor dispute is threatening to disrupt next week’s presidential debate at Loyola Marymount University in California,” the HuffPost reports. “Elizabeth Warren, Bernie Sanders and Joe Biden have said they will not attend if the issue is not resolved in time, as has businessman Andrew Yang.”

“Elizabeth Warren and Pete Buttigieg have been sparring over their work histories and health-care policies in recent weeks, but one Democratic 2020 candidate who poses a major threat to both of them is for now going mostly unchallenged: Bernie Sanders,” the Wall Street Journal reports.

“Aides to some of the Vermont senator’s competitors said he is getting a pass for a reason. Democratic candidates think Mr. Sanders’s core supporters are unlikely to leave his side, so there is no point trying to pick off that support, the aides said. But they also don’t think he can build his coalition enough to capture the nomination.”

“President Trump is discussing with his advisers the possibility of sitting out the general election debates in 2020 because of his misgivings about the commission that oversees them,” the New York Times reports.

“Mr. Trump has told advisers that he does not trust the Commission on Presidential Debates, the nonprofit entity that sponsors the debates.”

“Less of a concern for Mr. Trump than who will emerge as the Democratic nominee is which media personality will be chosen as the debate moderator.”

“Sen. Bernie Sanders abruptly retracted his endorsement of controversial congressional candidate Cenk Uygur on Friday, making a rare concession to critics who were angered by Uygur’s explicit and demeaning comments about women and minorities in past years,” the Washington Post reports. I had the displeasure of meeting Cenk years ago at one of the Netroots Nations conferences in the late 2000’s. He has long been known as an asshole. I question why Sanders dared to endorse him in the first place. Did he not do his homework, or not care?

Axios: “Over a 90-minute PowerPoint session at a hotel in Arlington, Va., on Thursday, Trump’s son-in-law Jared Kushner, campaign manager Brad Parscale and other senior Trump campaign officials presented dozens of national political reporters their theory of how Trump can win again in 2020.”

Key to the strategy is crushing the Never-Trumpers: “They’ve ‘remade’ the state parties in ‘the president’s image,’ per one official — with 42 state party chair elections since the 2018 midterms. The Trump campaign isn’t tolerating anti-Trump officials in state party leadership positions in 2020.”

Dan Balz: “For most of the year, former vice president Joe Biden has often been described in negative terms. It has been said he is not as sharp as he should be or once was; that he is well liked but can’t excite the base of the new Democratic Party; that his agenda is little more than ‘return to normalcy’ and that his fundraising problems belie bigger weaknesses.”

“All of that is well and good, but he nears the end of 2019 also as a candidate who has absorbed more criticism than just about everyone else in the Democratic field combined, and he has survived the attacks reasonably well. He remains atop the national polls, his support among African Americans has proved durable through the year, and while his numbers have slipped in Iowa and New Hampshire, he is nonetheless in the battle in those two early-voting states.”

“Cory Booker’s campaign held five events in New Hampshire this week. But one thing was notably was missing from all of them: Cory Booker himself,” Politico reports.

“With his campaign struggling to gain traction in early state polls, Booker has gone all-in on Iowa and South Carolina — and all but vanished from New Hampshire.”

New York Times: “As Mr. Bloomberg traverses the country as a presidential candidate, he is drawing on a vast network of city leaders whom he has funded as a philanthropist or advised as an elder statesman of municipal politics. Bloomberg Philanthropies, which has assets totaling $9 billion, has supported 196 different cities with grants, technical assistance and education programs worth a combined $350 million. Now, leaders in some of those cities are forming the spine of Mr. Bloomberg’s campaign: He has been endorsed so far by eight mayors — from larger cities like San Jose, Calif., and Louisville, Ky., and smaller ones like Gary, Ind., representing a total of more than 2.6 million Americans.”

“For all of those endorsers, Mr. Bloomberg has been an important benefactor. All have attended his prestigious boot camp at Harvard that gives the mayors access to ongoing strategic advice from Bloomberg-funded experts. More than half have received funding in the form of grants and other support packages from Mr. Bloomberg worth a total of nearly $10 million.”

“Mike Bloomberg is making up for lost time — just two weeks after his late entry into the Democratic presidential primary, the former New York City mayor has hired more than 300 people so far to work on his campaign,” Politico reports.

“The self-funded multi-billionaire recently tapped nearly 100 staffers to fan out across 15 states as he pursues his unorthodox strategy of skipping the four early voting states and zeroing in on Super Tuesday on March 3.”

“National Democratic leaders, backed by activist groups formed in response to President Trump’s election, are planning an unprecedented push to flip legislative chambers in at least seven states next year, a major strategic shift buoyed by the party’s successful seizure of Virginia’s state government in November,” the Washington Post reports.

“Joe Biden sought to draw parallels between the results of the United Kingdom’s general election and the 2020 White House race — arguing that British Prime Minister Boris Johnson’s resounding victory should warn Democrats against veering too far left in their fight to defeat President Trump,” Politico reports.

Franklin Foer: “There’s no doubt that Sanders shares some of the Corbyn view of the world. He will sometimes invoke the inglorious American history of intervening in Latin America. But Sanders is less conspiratorial and more open-minded than his British cousin. Consider how differently they have reacted to Vladimir Putin. When the Russians poisoned an ex-spy and his daughter in Salisbury last year, Corbyn expressed immediate skepticism about how quickly the British government apportioned blame for the crime. Sanders hasn’t similarly hesitated to criticize Putin. He readily condemned Russian interference in the 2016 presidential election. And he has said that he would make opposition to authoritarian kleptocrats central to his foreign policy. (His speeches linking global inequality to illiberal authoritarianism contain a theory of kleptocracy that other candidates should borrow.)”

“While Sanders might have been a foreign-policy outlier in the years immediately following 9/11, his views aren’t so far from the prevailing post-Iraq consensus. He doesn’t reject humanitarian intervention on principle, even as he rails against endless wars. Sanders supported the U.S. air strikes during the Kosovo War; he was sympathetic to Barack Obama’s intervention in Libya, although he eventually came to view that policy skeptically. Where Corbyn has said that he wished NATO never existed, Sanders has merely bellyached about member states paying their dues.”