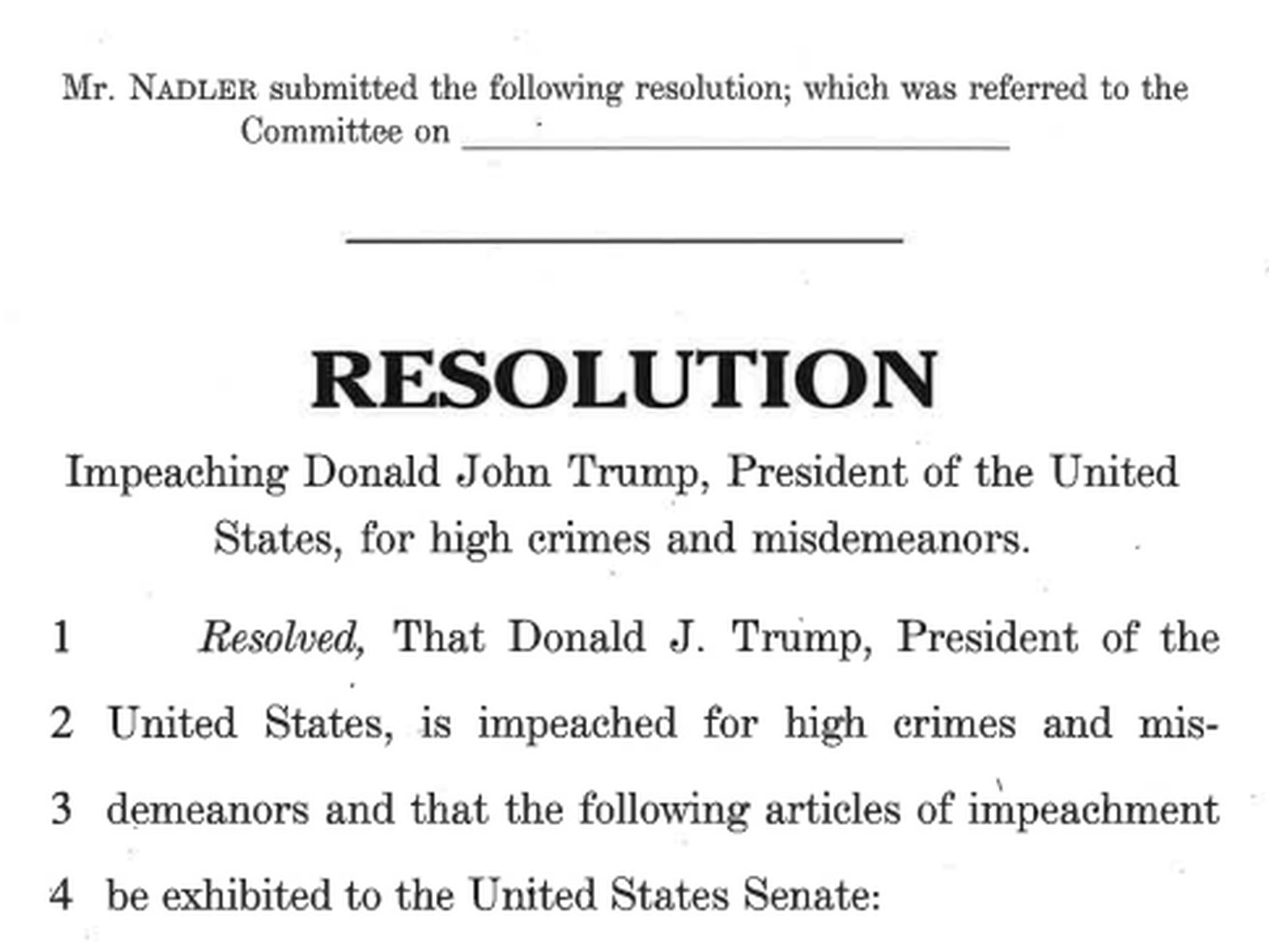 House Judiciary Committee chairman Jerry Nadler (D-NY) announced his committee will consider two articles of impeachment against President Trump: abuse of power and obstruction of Congress. You can read the Articles of Impeachment here.

Democrats say Trump has exhibited a pattern of behavior that presents a “clear and present danger” to the 2020 presidential election and national security.

The Judiciary Committee will vote on the articles on Thursday and the full House is expected to vote next week.

Axios: “Completing the trade deal, designed to replace NAFTA, is one of President Trump’s biggest policy goals for 2019. Democrats’ decision to back it — despite unveiling articles of impeachment against the president only an hour prior — highlights how they want something to bring home to their constituents ahead of 2020 as well.”

Politico: “[The deal hands] the president a major political victory amid impeachment proceedings and [gives] moderate Democrats a legislative accomplishment they can sell back home.”

“Although the deal is widely seen as a crucial pre-election year win for Trump, Pelosi has been emphasizing that passing a new NAFTA goes beyond partisan politics, particularly given Democrats’ long history of criticizing the old pact’s harm on American workers.”

Playbook: “We said a few months ago that impeachment, in a weird way, made a trade deal more likely. It created an incentive for Democrats to work with Trump on something. And here we are, about to see USMCA sail through the Congress with support from the Trump administration, labor and congressional Republicans and Democrats. We expect it to clear with big margins.”

FBI Director Christopher Wray undercut a theory pushed by President Trump and some of his Republican allies that the government of Ukraine meddled in the 2016 election, ABC News reports.

Said Wray: “We have no information that indicates that Ukraine interfered with the 2016 presidential election.”

President Trump lashed out at FBI Director Christopher Wray, suggesting “he will never be able to fix the FBI” based on his reaction to a Justice Department inspector general’s report examining the bureau’s investigation of Trump’s 2016 campaign, the Washington Post reports.

Said Trump: “I don’t know what report current Director of the FBI Christopher Wray was reading, but it sure wasn’t the one given to me. With that kind of attitude, he will never be able to fix the FBI, which is badly broken despite having some of the greatest men and women working there!”

Jonathan Bernstein: “Challenge the findings of an investigation? Absolutely legitimate. Spin the parts that are good for your side? Everyone in politics does that. But to say up is down, day is night, apples are vegetables and baseball is played by horses on a chessboard? No. That’s not part of a healthy democracy.”

“Trump, and Republicans in general, have been dead wrong about this investigation. And if they insist on claiming otherwise, it’s up to the media to make clear that they’re simply not telling the truth — and that none of the nefarious things they’ve been alleging actually happened.”

“On Dec. 2, as Speaker Nancy Pelosi was on a trip to a climate change conference in Spain, she held a conference call with about a dozen of the most vulnerable Democrats who delivered her the House,” Politicoreports.

“Their message to Pelosi: Keep impeachment focused only on the Ukraine scandal. The obvious but unsaid implication was she should exclude a standalone article of impeachment against President Donald Trump based on the findings of special counsel Robert Mueller’s investigation, which described numerous instances of potential obstruction of justice by Trump.”

“Two days later, Pelosi called an emergency meeting in her second-floor Capitol office with her senior leadership team, where it quickly became clear her deputies were divided.”

“A small group of vulnerable House Democrats is floating the longshot idea of censuring President Trump instead of impeaching him,” Politicoreports.

“Those Democrats, all representing districts that Trump won in 2016, huddled on Monday afternoon in an 11th-hour bid to weigh additional — though unlikely — options to punish the president for his role in the Ukraine scandal as the House speeds toward an impeachment vote next week.”

“A federal judge in El Paso blocked the Trump administration’s plan to pay for border barrier construction with $3.6 billion in military funds, ruling that the administration does not have the authority to divert money appropriated by Congress for a different purpose,” the Washington Post reports.

Former FBI lawyer Lisa Page filed a lawsuit against the Department of Justice and the FBI, alleging that the two agencies unlawfully shared private text messages between her and former FBI agent Peter Strzok with the media.

President Trump has paid $2 million in court-ordered damages for misusing funds in a tax-exempt charity he controlled, the Washington Post reports.

“Paul Manafort has kept himself on Trump’s radar from behind bars in a federal penitentiary by feeding the president’s personal attorney a conspiracy theory that Ukraine, and not Russia, interfered in the 2016 campaign.”

Rudy Giuliani told the Washington Post that President Trump has asked him to brief the Justice Department and Republican senators on his findings from a recent trip to Ukraine ahead of a likely Senate impeachment trial.

Said Giuliani: “He wants me to do it. I’m working on pulling it together and hope to have it done by the end of the week.”

Washington Examiner: “Senate Republicans do not expect to call witnesses President Trump might want to hear from most in an impeachment trial, conceding there are not the votes to summon key figures such as Hunter Biden and the unidentified government whistleblower whose complaint sparked the process.”

“Senate impeachment rules require a majority vote to call witnesses, and with just two out of 53 votes to spare, there is no ‘appetite’ among Republicans to pursue testimony from people that Democrats blocked Republicans from subpoenaing during the House investigation. Indeed, Republicans might forgo calling witnesses altogether, saying minds are made up on Trump’s guilt or innocence and that testimony at trial on the Senate floor would draw out the proceedings unnecessarily.”

CNN: “In conversations with the White House, the Kentucky Republican has made clear he hopes to end the trial as soon as he can, an effort to both get impeachment off his lap and protect his conference from potentially damaging votes should the process break out into partisan warfare. That will include a continuous whip count until McConnell feels he has the votes to acquit the President and end the show. He has even floated a 10-day minimum during these talks.”

“But the show is exactly what Trump wants. He’s made clear to advisers privately that rather than end the trial as quickly as possible, he is hoping for a dramatic event, according to two people familiar with his thinking. He wants Hunter Biden, Rep. Adam Schiff and the whistleblower to testify. He wants the witnesses to be live, not clips of taped depositions. And he’s hoping to turn it into a spectacle, which he thinks is his best chance to hurt Democrats in the election.”

Politico: ““As soon as the House impeaches President Donald Trump, the Senate is in theory required to immediately begin a trial. But for a multitude of reasons, both strategic and mundane, senators say they are aiming to reach an agreement to take a breather and come back for the trial in January.”

“Despite bipartisan hopes of not letting impeachment drag on, absolutely no one in the Senate seems to want to sacrifice their Christmas or New Year’s. And though nothing has been finalized, senators expect party leaders who have sway on the matter to agree in the coming days.”

Attorney General William Barr dismissed the findings of the Justice Department’s inspector general in an interview with NBC News, saying that his hand-picked prosecutor, John Durham, will have the last word on the matter.

Said Barr: “I think our nation was turned on its head for three years based on a completely bogus narrative that was largely fanned and hyped by a completely irresponsible press. I think there were gross abuses…and inexplicable behavior that is intolerable in the FBI.”

“President Trump called for the population of Seoul to be moved during an Oval Office meeting when tensions between the US and North Korea were at their height, according to a new book about the president’s relations with the US military,” The Guardian reports.

“In Trump and his Generals: The Cost of Chaos, the national security and counter-terrorism expert Peter Bergen also gives new details of Trump’s demands that the families of US service members in South Korea be evacuated, which the North Korean regime would have interpreted as a clear move towards war. In both cases, Trump’s impetuous diktats were ignored by his top officials.”

“The U.S. government deficit spiked 12 percent to $342 billion during the first two months of fiscal year 2020, according to data from the Congressional Budget Office,” Fox Business reports.

Ron Brownstein: “Over the past 15 years, employment in the computer- and science-based industries at the forward edge of economic change has further concentrated into a handful of superstar cities, according to a sweeping new study released Monday… Just 20 large metropolitan areas now account for a clear majority of the nation’s jobs in the 13 high-productivity industries that the authors identify as the nation’s most innovative.”

“This narrowing distribution of America’s most cutting edge, research-intensive industries — including pharmaceuticals, software, aerospace, data processing, and computer and communications manufacturing — has contributed to the concern in many smaller communities about being left behind in the changing economy.”