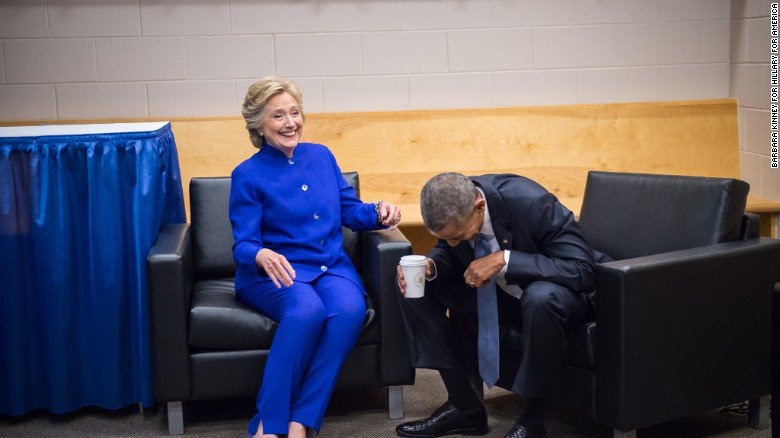 “A long-awaited Justice Department inspector general’s report examining the FBI’s investigation into possible coordination between the Trump campaign and Russia rebuts allegations of illegal spying and that political bias played a role in the probe begun ahead of the 2016 election, but finds serious faults in other areas,” the Washington Post reports.

“The inspector general concludes that the FBI had an ‘authorized purpose’ to initiate the investigation and that the bureau’s use of confidential informants was in compliance with the rules.”

Politico: “Horowitz’s review did not find any indication that the FBI planted anyone in the campaign, as President Trump has claimed, but it does bolster concerns that campaign officials were repeatedly the focus of outreach by ‘confidential human sources’ seeking to establish whether the campaign was colluding with Russia.”

Said Comey: “It was all made up. Two years of sitting silently at the FBI while you are lied about and finally the truth is out. It was lies. There was no treason. There was no conspiracy. There was no tapping of Trump’s wires. There was no putting informants in the campaign. It was all nonsense. And the FBI finally has its day with the American people and I hope they pay attention to it.”

Paul Waldman and Greg Sargent: The inspector general report just blew up Trump’s lies. So Barr is rushing to the rescue.

“Attorney General William Barr sharply criticized on Monday the FBI’s decision to open the Russia investigation, undercutting a major finding in a long-awaited watchdog report and at the same time showing his willingness to act as President Trump’s vocal defender,” the New York Times reports.

“John Durham, a federal prosecutor whom Mr. Barr appointed to run a separate criminal investigation into the origins of the Russia investigation, backed Mr. Barr’s findings in his own highly unusual statement.”

Said Durham: “Last month we advised the inspector general that we do not agree with some of the report’s conclusions as to predication and how the FBI case was opened.”

Given Barr’s history of lying with respect to the Mueller Report, his analysis and dissent are to be given no weight. He is, like his boss (as will be shown below), lying.

“That’s not a term I would ever use to describe our workforce and I think it’s an affront to them.”

— FBI Director Christopher Wray, in an interview with ABC News, on the use of the term “deep state.”

President Trump said a new report from the Justice Department’s internal watchdog is “far worse than I ever thought possible,” calling the findings of the report “a disgrace,” CNBC reports. The report, however, found no evidence of political bias in connection with the origins of the Russia investigation.

During an appearance on Fox News within minutes of the Justice Department inspector general report’s release Monday afternoon, Chris Wallace reported that “the headline is they didn’t find the things that Bill Barr and Donald Trump alleged.”

After saying that the inspector general found that there was no political bias by former FBI Director James Comey or his former deputy Andrew McCabe, Wallace argued that the report itself shows that “it was proper to launch the investigation” and to seek a warrant on Page.

Variety: “Linda Ronstadt, one of this year’s Kennedy Center Honorees, had sharp words for Secretary of State Mike Pompeo on Saturday night during a State Department reception for the Kennedy Center kudos… Ronstadt rose to the microphone a few feet away from the host’s table and looked straight ahead.”

Said Ronstadt: “I’d like to say to Mr. Pompeo, who wonders when he’ll be loved, it’s when he stops enabling Donald Trump.”

“Nearly a decade before the 2016 presidential campaign, Donald Trump’s daughter Ivanka met a British intelligence officer who ran the Russia desk — and when the agent left his covert service and moved into private practice in 2010, she stayed in touch,” ABC News reports.

“The two exchanged emails but never worked together, and the man, Christopher Steele, would one day re-emerge in a most unexpected way, taking a central role in the Russia scandal that consumed the early years of her father’s presidency.”

Politico: “Congressional negotiators are scrambling to reach a deal that would allow the House to vote on several spending bills this week, with just 11 days left to avert a shutdown.”

“The last-minute wrangling to bring long-delayed spending bills to the floor is an attempt to take care of some must-do work heading into next week, when Capitol Hill will be consumed with a likely House floor vote to impeach President Trump.”

“The Supreme Court this morning left in place a Kentucky law requiring abortion providers to perform an ultrasound and show and describe it to the patient, regardless of the patient’s wishes,” Politico reports.

“The justices did not offer an explanation for their decision to refuse to hear a challenge to a lower court ruling that upheld the Kentucky restrictions.”

New York Times: “There is little to show for it. The Taliban control much of the country. Afghanistan remains one of the world’s largest sources of refugees and migrants. More than 2,400 American soldiers and more than 38,000 Afghan civilians have died.”

“Still, life has improved, particularly in the country’s cities, where opportunities for education have grown. Many more girls are now in school. And democratic institutions have been built — although they are shaky at best.”

“Microsoft won the Joint Enterprise Defense Infrastructure, or JEDI, contract, which is valued at up to $10 billion over the next decade. Amazon had long been considered the favorite.”

Just Security: “Not everything in the [House Republican Impeachment] report is a lie. In many instances, it is clear that, where possible, there was great care taken to avoid outright mistruths, through the careful phrasing of arguments to suggest a more sweeping defense than is actually offered, or through focusing on irrelevant and ambiguous witness testimony while ignoring direct and clear testimony to the contrary.”

“But staying within the bounds of the factual record – or even within the bounds of reasonable subjective interpretation of the record – could only get House Republican staff so far, and much of the report doesn’t just dance around the truth so much as it strides into deliberate falsehood. In order to depict the events at the heart of the Trump-Ukraine impeachment inquiry in a light that could at all be construed as a defense of President Trump’s conduct, it appears that some outright lies were needed.”

North Korea took its most personal swipe at President Trump in more than two years, saying the U.S. leader’s recent comments made him sound like a “heedless and erratic old man,” Bloomberg reports.

Josh Marshall: “In sum, there’s a whole half of the Trump/Giuliani collusion campaign in Ukraine that barely anyone has scratched the surface of and Josh has the story. The key theme of Giuliani’s trips has been looking for crooks in Ukraine trying to keep out of jail either in Ukraine or the U.S. and offering them protection if they’ll intervene in the 2020 U.S. presidential election. We’ve heard a lot about Dmitry Firtash, the oligarch who’s funded and organized much of the effort, and the corrupt former prosecutor Yuriy Lutsenko. But equally involved has been Ihor Kolomoisky, one of the country’s other top five oligarchs and widely seen — at least until recently — as Zelensky’s patron. The same pattern, facing charges in the U.S., hiring another high-powered Trump-aligned attorney, trying to make nice with Trump by using American intermediaries to make accusations against the Bidens. An amazing story. “

“President Trump is planning to meet with Russian Foreign Minister Sergei Lavrov on Tuesday in Washington, an encounter that is sure to draw significant scrutiny amid several ongoing controversies involving Trump and Russia,” CNN reports.

“Russian Foreign Ministry spokeswoman Maria Zakharova told CNN on Monday that the two plan to meet. The White House has not yet confirmed the meeting to CNN.”

Washington Post: “Giuliani’s previously unreported attempts to shape the pick for the U.S. envoy to Qatar is part of an un­or­tho­dox foreign policy portfolio he has carved out for himself while also working as a power-broker-for-hire with direct access to the president and top administration officials.”

“The dual roles he has embraced is part of what longtime colleagues say has been a transformation of the once-iconic New York mayor into a multimillionaire consultant to powerful figures overseas.”

New York Times: How Giuliani led Trump to the brink of impeachment.