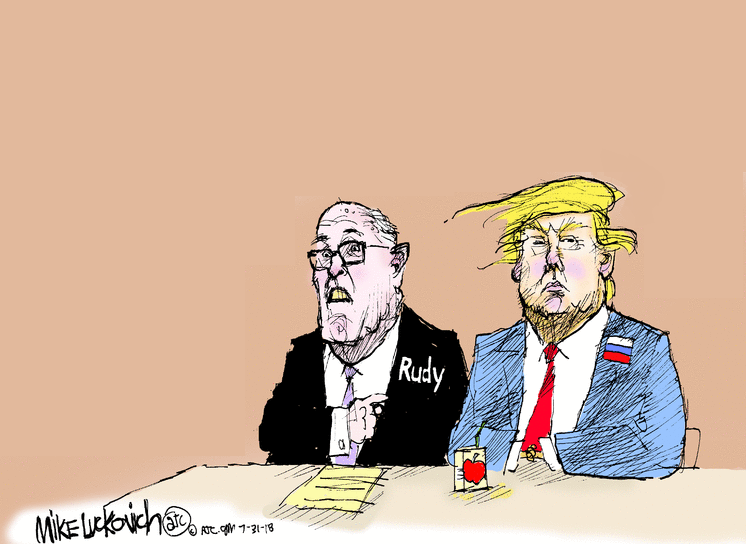 “President Trump has routinely communicated with his personal lawyer, Rudy Giuliani, and other individuals speaking on cellphones vulnerable to monitoring by Russian and other foreign intelligence services,” the Washington Post reports.

“Phone records released this week by the House Intelligence Committee revealed extensive communications between Giuliani, unidentified individuals at the White House and others involved in the campaign to pressure Ukraine, with no indication that those calls were encrypted or otherwise shielded from foreign surveillance.”

“The revelations raise the possibility that Moscow was able to learn about aspects of Trump’s attempt to get Ukraine to investigate a political rival months before that effort was exposed by a whistleblower report and the impeachment inquiry.”

Said Schiff: “It’s all about what’s in it for him personally and for his re-election campaign.”

Jonathan Chait: “Giuliani — who, incredibly, still represents Trump as an ‘attorney’ despite being the reported target of an increasingly dire criminal investigation — is continuing the same work he’s been undertaking on Trump’s behalf for two years. The House Republican line is that Trump wasn’t trying to order up dirt that would discredit the Mueller investigation and the Bidens. No, he was just really serious about corruption. Yet Giuliani is meeting with various Ukrainians ‘as part of his investigation into the Bidens and his bid to undercut the credibility of the impeachment investigation.’”

“This fact isn’t being dug up by hostile reporters against Giuliani’s wishes. He is literally broadcasting it.”

The Fix: “Through the first 11 months of this year, Trump said he was ‘looking at,’ at least 34 issues or policies… He has not taken any known public action to follow up on 17 of those items.”

CNN: “Congress is once again running right up to the brink of a government shutdown. There is cautious optimism, but still work to be done. Progress has been made but the largest outstanding issues still stand. Everyone involved wants an agreement, but those same lawmakers and administration officials are still haggling over issues — large and small.”

“Negotiators have about 24 to 48 hours to wrap up an agreement on all 12 spending bills to have any chance to move them in such a short time frame. This is very, very tight — and a short-term off-ramp will be needed if nothing comes together before Monday.”

Employers added 266,000 jobs in November and unemployment matched a 50-year low of 3.5%, signs the U.S. economy is withstanding a global slowdown, the Wall Street Journal reports.

“A former Ukrainian member of parliament who has claimed to have dirt on a company linked to the Bidens was arrested earlier this week in Germany,” the Daily Beast reports.

“Oleksandr Onyshchenko, who worked closely with Ukraine’s previous president before fleeing the country after being accused of embezzlement, has been living in Europe for several years. German authorities arrested him in Aachen on Friday.”

“Speaker Nancy Pelosi never wanted to impeach President Donald Trump. But now that it’s happening, she’s doing it her own way — in four inch heels and with an iron grip. Pelosi has tightly scripted every step of the House’s march toward impeachment,” Politico reports.

“All the key decisions — whether to move forward with an inquiry, who will be in charge of the probe, and whether to begin drafting impeachment articles — have been made solely by Pelosi, then conveyed afterwards to her 12-member leadership team.”

“Even her top committee chairmen — including Rep. Jerry Nadler (D-N.Y.), head of the panel charged with drafting articles of impeachment against Trump — have been cast in supporting roles at times, learning details about Pelosi’s plans after she’s made them. Pelosi, long known for her top-down leadership style, has taken it to extremes these last few weeks as the House nears the final stages of the impeachment inquiry.”

“House Democrats are considering articles of impeachment against President Trump that include obstruction and bribery but are unlikely to pursue a treason charge as they weigh how to illustrate that the president’s activities involving Ukraine were part of what they see as a pattern of misconduct,” the Washington Post reports.

More than 500 law professors signed a letter calling for President Trump to be impeached, the Washington Post reports.

From the open letter: “There is overwhelming evidence that President Trump betrayed his oath of office by seeking to use presidential power to pressure a foreign government to help him distort an American election, for his personal and political benefit, at the direct expense of national security interests as determined by Congress. His conduct is precisely the type of threat to our democracy that the Founders feared when they included the remedy of impeachment in the Constitution.”

Rep. Justin Amash (I-MI) told CNN that he’s ready to vote for three articles of impeachment: obstruction of Congress, obstruction of justice and abuse of power. However, he says he wants to see final language before ultimately deciding.

“A senior British diplomat in the US has quit with a blast at the UK government over Brexit, saying she could no longer ‘peddle half-truths’ on behalf of political leaders she did not trust,’” CNN reports.

“In a searing resignation letter delivered just over a week before the UK general election, Alexandra Hall Hall, the lead envoy for Brexit in the British Embassy in Washington, said that she had become increasingly dismayed by the demands placed on the British civil service to deliver messages on Brexit which were not ‘fully honest.’”

Rep. Duncan Hunter (R-CA) is showing no signs of stepping down from office despite his guilty plea Tuesday on a felony campaign finance charge in federal court, Politico reports.

Former Rep. Darrell Issa (R-CA) told the San Diego Union Tribune that President Trump should consider clemency for convicted Rep. Duncan Hunter (R-CA), who is scheduled to be sentenced to prison on March 17.

Said Issa: “It’s not my decision. It’s the president’s decision. But I would certainly say the commuting of sentencing… has a certain ability to balance the public good. Are we better off spending $60,000 a year to put him behind bars or are we better off with him doing community service and going on with his life with the likelihood of him committing a crime in the future being pretty low?”

Josh Owens, a former staff member at Alex Jones’s far-right conspiracy site Infowars, admits in the New York Times to making up stories for the site about the threat of Shariah law within the United States.

Writes Owens: “The information did not meet our expectations, so we made it up, preying on the vulnerable and feeding the prejudices and fears of Jones’s audience. We ignored certain facts, fabricated others and took situations out of context to fit our narrative.”