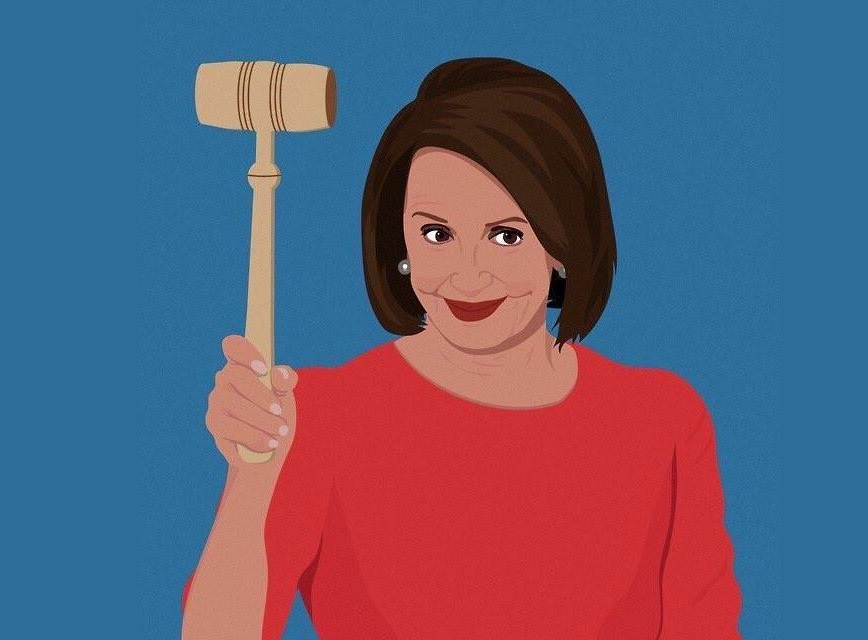 “Speaker Nancy Pelosi asked the House of Representatives to begin drafting impeachment articles against President Trump, pushing ahead with a rapid timetable that could set the stage for a deeply partisan vote before Christmas to charge him with high crimes and misdemeanors,” the New York Times reports.

Said Pelosi: “The facts are uncontested. The president abused his power for his own personal political benefit, at the expense of our national security.”

She added: “His wrongdoing strikes at the very heart of our Constitution. Sadly, but with confidence and humility, with allegiance to our founders and a heart full of love for America, today I am asking our chairman to proceed with articles of impeachment.”

Playbook: “This comes as House Democrats on the Judiciary Committee have been told to stay in town this weekend for ‘prep,’ a few sources on the panel told us.”

CNN: “Pelosi is having a steady stream of private conversations with her colleagues to get their input about whether they’re ready to impeach President Trump and what they think should be included in articles of impeachment.”

“House impeachment investigators will present evidence against President Trump to the Judiciary Committee on Monday, a key step before Democrats finalize articles of impeachment,” Politico reports.

“A group of House Democratic centrists are warning their caucus that any case against President Donald Trump should steer clear of Robert Mueller — resurfacing an ugly internal debate on impeachment that could complicate the coming weeks,” Politico reports.

“Multiple moderates — including freshman lawmakers deemed most at-risk in 2020 — have urged Democrats not to relitigate the issues in the Mueller report in their own investigation into the Ukraine scandal. But key Democrats, including House Judiciary Committee Chairman Jerry Nadler, have suggested that it could be included in eventual articles of impeachment, with many in the caucus still eager to repudiate Trump for his misconduct outlined by Mueller.”

Speaker Nancy Pelosi lashed out at a Capitol Hill reporter who had questioned whether she “hated” President Trump following her decision to advance the Democrats’ impeachment inquiry, The Hill reports.

She added: “As a Catholic I resent you using the word ‘hate.’ Don’t mess with me when it comes to words like that.”

“The White House signaled Wednesday that it will aggressively defend President Trump in a near-certain Senate impeachment trial in the coming weeks, as legal experts called by House Democrats testified in a contentious hearing that Trump’s Ukraine dealings constitute an impeachable offense,” the Washington Post reports.

President Trump said that if House Democrats are going to impeachment him they should do it “now” and “fast” so he can have a “fair” trial in the Republican-controlled Senate, The Hill reports.

Tweeted Trump: “I say, if you are going to impeach me, do it now, fast, so we can have a fair trial in the Senate, and so that our Country can get back to business. We will have Schiff, the Bidens, Pelosi and many more testify, and will reveal, for the first time, how corrupt our system really is. I was elected to ‘Clean the Swamp,’ and that’s what I am doing!”

“President Trump’s 2017 tax cuts reduced the U.S. tax burden to one of the lowest among major world economies,” the Wall Street Journal reports.

“U.S. tax burdens dropped by the largest amount among those countries in 2018, and the U.S. now has lower taxes than all but three countries in the Organization for Economic Cooperation and Development.”

In a sprawling new profile in New York Magazine, Attorney General Bill Barr weighed in on his relationship with President Trump, on the role politics plays in prosecutions, and the criticism of how he’s handling an investigation into the 2016 Trump-Russia probe.

“That’s all bullshit,” Barr told New York Magazine, when asked about the skepticism raised by his trips abroad to seek cooperation from foreign countries in the investigation, which is ostensibly being led by U.S. Attorney John Durham.

“This is the third time that the White House has directed a Republican senator to block the resolution, a symbolic measure already passed by the House that would infuriate Turkish President Recep Tayyip Erdoğan.”

North Korea threatened to resume insults of President Trump and consider him a “dotard” if he keeps using provocative language, such as referring to its leader as “rocket man,” the AP reports.

“President Trump has asked the Supreme Court to shield his financial records from the Democratic-led House Oversight and Reform Committee,” The Hill reports.

“The case marks the second time Trump has appealed to the high court to prevent the disclosure of financial documents and sets the stage for a potentially groundbreaking ruling on the extent of congressional oversight authority and presidential power.”

Charlie Sykes: “Trump counts on a dizzying, vertiginous cycle of news, outrage and disinformation to move past damaging stories before they are fully absorbed or placed into context.”

“Blink and you will miss it: kids in cages, ‘human scum,’ the G-7 and Doral, ‘send her back,’ his fraudulent foundation. Remember when Trump was planning to invite the Taliban to Camp David on the eve of 9/11? And how many weeks has it been since he gave Turkish President Recep Tayyip Erdoğan the green light to invade Syria?”

“Stories that would once have dominated the public’s consciousness for weeks, now can vanish in less than a single news cycle. By Friday of every week, even those of us who follow the news for a living have a hard time remembering the stories that had consumed our attention on Monday.”

“Rudy Giuliani met Thursday in Ukraine with one of the key figures working to build a corruption case against Hunter Biden, the Ukraine official said in a Facebook post,” the Washington Post reports.

“The lawmaker, Andriy Derkach, posted photographs of himself meeting Giuliani in the Ukrainian capital Kyiv, vowing to set up an anti-corruption group in the Ukraine parliament.”

“A former Playboy model who has said she had an affair with Donald Trump before he was president sued Fox News on Thursday, saying that the host Tucker Carlson had intentionally defamed her on his television show,” the New York Times reports.

“The model, Karen McDougal, said Mr. Carlson had falsely accused her of extortion last year when he said that she ‘approached Donald Trump and threatened to ruin his career and humiliate his family if he doesn’t give them money.’”

“The Senate confirmed eight of President Trump’s court picks this week, underscoring the rapid pace the GOP-controlled chamber has set on judicial nominations,” The Hill reports.

I hope when Zimmerman dies, his death is violent, painful and horrendous, and that he burns in Hell for all eternity. He is just evil distilled.

Amy Walter: “Overall, my guess is that by the time we hit the summer of 2020, the issue of impeachment will just be one more in a string of unprecedented, presidency-altering events that have come and gone in the mind of voters. That’s not to say that it won’t be relevant. While the impeachment process hasn’t impacted Trump’s overall job approval ratings, the question is whether it is draining any of the last bit of ‘goodwill’ or ‘patience’ from voters who Trump needs to win over next fall.”

“While his support from his base is solid, will cross-pressured or ambivalent voters, those who reluctantly supported him last time, or who are happy with the current economy but unhappy with his style, decide that they’ve had enough of the drama and controversy? As one GOPer said to me the other day, will voters decide that they’ve grown tired of the reality show and just can’t stomach another four years of it?”