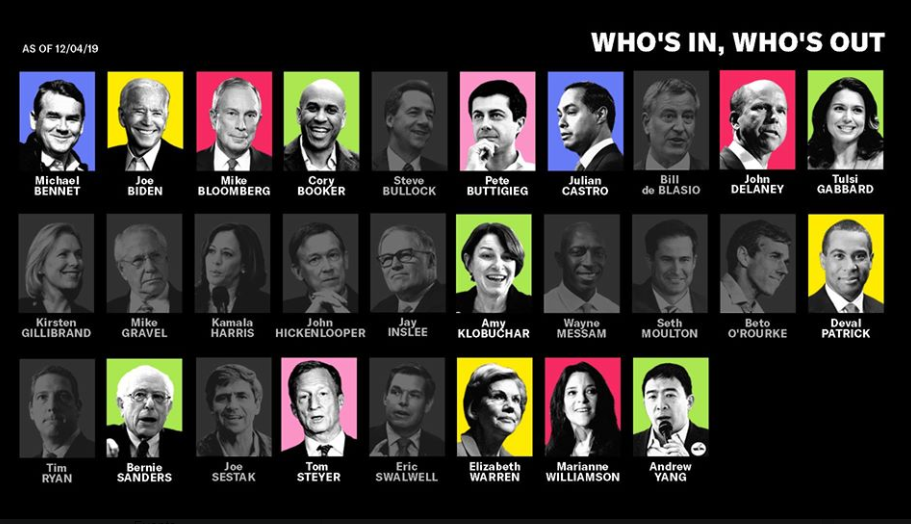 “Joe Biden lashed out at an Iowa town hall Thursday after a man suggested the former vice president helped his son get a sweetheart deal in Ukraine and was ‘selling access’ like President Trump does,” Politico reports.

“The fiery exchange with the man, who only identified himself as a non-Republican Iowa farmer, ended with Biden challenging him to a contest of push-ups, running or an IQ test before he yelled at him.”

“It was the most dramatic moment of Biden’s ‘No Malarkey’ bus tour through Iowa and underscored the political landmines the Democratic candidate can encounter in unscripted moments on the campaign trail. Biden later denied he lost his temper, a claim belied by video of the exchange.”

“Pete Buttigieg worked at McKinsey & Company, an elite consulting firm with global reach, for three years. But as the South Bend, Indiana, mayor builds his case for why he should be president, he has pointedly kept the details of that line on his resume a secret,” the HuffPost reports.

“Now that he is gaining in early-voting states, ethics advocates are calling on Buttigieg to stop dodging questions and tell the public exactly what he did at the world’s most prestigious — and notorious — consulting firm.”

“A Time analysis of publicly available Facebook data, which included the cataloging of hundreds of distinct messages, shows how Trump is using social media to supercharge his pushback against impeachment and add to his considerable $150 million war chest. Ads that many Americans would otherwise never see have been tested and tailored to solicit responses from older voters, deploying Trump’s distinctive use of capital letters and words like scam and witch hunt.”

The Upshot: “Republicans in Congress have tried to discredit the Democratic-led impeachment inquiry by arguing that it distracts Congress from its real duties. One Republican-aligned group recently released a poll of 1,600 voters in four congressional districts that suggested Americans ‘prioritize issues over impeachment.’”

“But when we look at data on revealed priorities from people all over the country, we see something different. In reality, there are few things facing the nation that anyone, regardless of party, believes are a higher priority right now.”

“Most people would give up their preferred outcomes on health care, the environment or taxes if it meant getting what they want on impeachment. It is an important issue for almost everyone.”

Said Kerry: “I’m not endorsing Joe because I’ve known him a long time. I’m endorsing him because I know him so well.”

I am probably a minority (no pun intended) in my reaction to this, but, this is what happens in a primary. Candidates, whether they are white or black or Latino, who do not garner support, for whatever reason, drop out. The Democratic Primary voters, many of them African American and Latino, have not supported Harris this time, and they don’t seem to be supporting Booker or Castro. I don’t see that as a glaring image problem that plaques or dooms the Democratic Party. Minority voters themselves are not supporting minority candidates.

Rep. Tom Graves (R-GA) announced that he will not seek reelection next year, becoming the 17th House Republican to announce his departure this cycle.

“He was so shocked he could barely talk… He was more shocked than me, I think.” — Hillary Clinton, quoted by CNN, on when she called Donald Trump to concede the 2016 presidential election. The Howard Stern YouTube Channel has several clips of his hours long interview with Hillary Clinton. I am still looking for the full complete interview. The clip above is about the Bin Laden raid. The quote above is from another. Check it out.

Kyle Kondik: “Despite his troubles, Romney seemed like the best bet to win the nomination for almost the entire campaign (except perhaps for when Rick Perry entered the race to great acclaim in August 2011). The same may be true of Biden, although the race remains volatile. But Biden’s position is arguably stronger than Romney’s was at this time eight years ago.”

“In that 2012 race, Republican voters appeared at times quite willing to go with a different option than Romney. From late August 2011 through February 2012, Romney was surpassed no less than five different times in the national RealClearPolitics polling average, first by Perry, then Herman Cain, then Newt Gingrich (for two different stretches), and then, finally, Rick Santorum. Yet Romney always ended up back in the lead after his setbacks and emerged by the end of the first month of primary contests as the clear favorite to win the nomination (that year’s race started in January, not February). Romney benefited from split opposition as the primary season went along, with Santorum, Gingrich, and Ron Paul all cannibalizing the non-Romney vote.”

A new UC Berkeley Institute of Governmental Studies poll in California finds Bernie Sanders leading the Democratic presidential field with 24%, followed by Elizabeth Warren at 22%, Joe Biden at 14%, Pete Buttigieg at 12% and Kamala Harris — even though she dropped out of the race this week — at 7%.

Said pollster Mark DiCamillo: “Voters are struggling and not sticking with their candidates. They are moving around from candidate to candidate.”

Associated Press: “The news of Kamala Harris’ sudden departure from the presidential race came during an all-staff conference call led from Cory Booker’s campaign headquarters in Newark, the New Jersey city that he led for seven years and that propelled him to national fame. Within hours, Booker dictated a message calling Harris ‘my friend and my sister,’ and a directive was issued to show her team respect at a difficult moment.”

“The campaign also scheduled a high-profile speech in Iowa. Booker’s aides have been careful to emphasize that the New Jersey senator isn’t looking to capitalize on the collapse of his Senate colleague’s White House bid. But they’re also aware that for a campaign languishing in the polls, this may be one of their last opportunities to turn things around.”

“Tulsi Gabbard and Andrew Yang could get more airtime than ever to introduce themselves to America with just one more poll — or they could spend the December debate sitting at home,” Politico reports.

“Right now, six candidates — four white men and two white women — are set to take the stage for the Democratic primary debate on December 19: Joe Biden, Pete Buttigieg, Amy Klobuchar, Bernie Sanders, Tom Steyer and Elizabeth Warren. Gabbard and Yang are not among them, with only one week left before qualification closes.”

“The website that users are directed to presents a slickly-produced video narrating Mr Bloomberg’s journey from ‘a middle-class kid who had to work his way through college’ to a billionaire businessman and politician.”