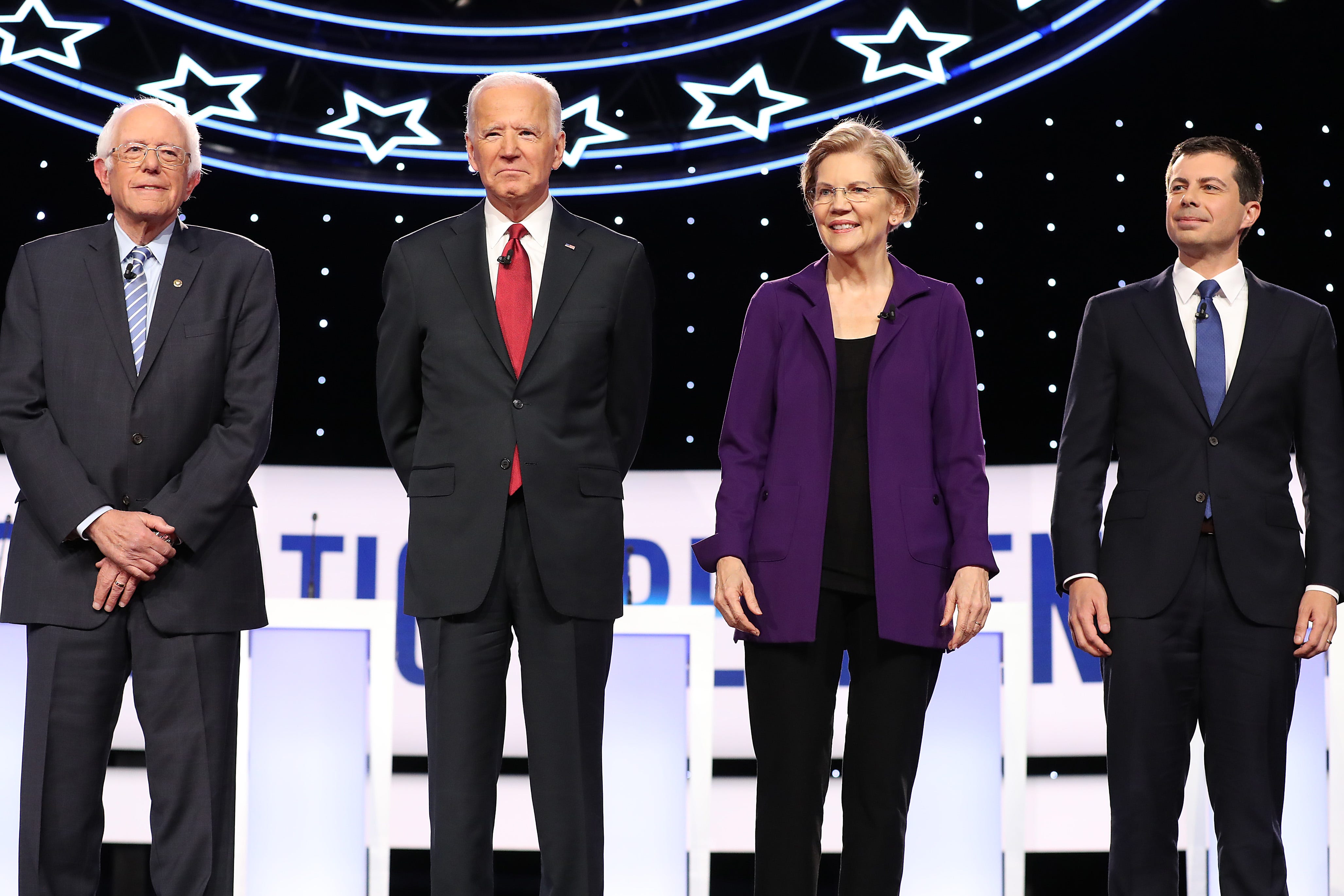 Politico: “Joe Biden’s feeling awfully confident these days. The former vice president thinks he doesn’t need Barack Obama to win the primary. He seemed to mock the idea that there’s enthusiasm for Elizabeth Warren or that Pete Buttigieg came up with his own plans. And he professed to be untroubled by the possibility of Mike Bloomberg dropping $1 billion to beat him out for the nomination.”

“Biden is dripping with confidence as he tours through Iowa two months before the state’s caucuses, after endless predictions his candidacy would crumble by now. Instead, the candidates who pitched themselves as Biden alternatives are the ones dropping.”

With Kamala Harris abruptly ending her presidential campaign yesterday, the race for the Democratic nomination might be down to just four candidates: Biden, Warren, Buttigieg and Sanders, with the only real dark horses being Bloomberg and Klobuchar.

Gabriel Sherman: “According to sources, Jared Kushner and Ivanka Trump’s effort to draft Nikki Haley to replace Pence on the 2020 ticket has fizzled. During her book tour month, Haley stoked speculation that she was positioning herself to replace Pence when she torched Trump nemeses Rex Tillerson and John Kelly while lavishing praise on Trump… The thinking was that Haley appealed to suburban women, a crucial demographic Trump fares poorly with.”

“But Republicans close to the White House told me Haley had made the determination that joining the ticket, or even replacing Mike Pompeo as Secretary of State, would be a net negative for her 2024 ambitions.”

Rep. Denny Heck (D-WA) announced his retirement from Congress at the end of his term.

C-SPAN captured a genuinely shocked Joe Biden when given the news that Sen. Kamala Harris (D-CA) was ending her presidential campaign.

Said Biden: “She’s a first-rate candidate and a real competitor and I have mixed emotions about it because she is really a solid, solid person and loaded with talent,”

Rep. Steve Watkins’ (R-KS) decision to sign a Kansas voter registration form and two other election documents that asserted his residential address was a UPS Store in Topeka could constitute felony voter fraud under federal law and election perjury under state statute, the Topeka Capital-Journal reports.

Bloomberg: “Joe Biden plans to pay for $3.2 trillion in policy proposals with new and higher taxes on the wealthy and corporations, including a measure targeting companies like Amazon.com Inc. and Netflix Inc. that have reported paying no federal income taxes in recent years.”

“The so-called minimum book tax, which his team estimates would raise $400 billion over a decade, would be coupled with increases in the top individual and corporate rates that Biden has already promised.”

Politico: “Kamala Harris could never personally lock down California as a presidential contender. But the senator’s supporters are warning that her former rivals would be foolish to underestimate Harris’ clout in her home state.

“‘Where do Californians who supported Kamala go now? First, they go into mourning. And then, they go into watching how people are reacting — because the rest of the field just got a big boost,’ says Christine Pelosi, the daughter of Speaker Nancy Pelosi and the chair of the California Democratic Party Women’s Caucus, which cheered Harris’ entry into the 2020 race. ‘If they’re gleeful about it, that will be a real turnoff.’”

Kentucky Gov. Matt Bevin (R) told WFPL that he lost his race for reelection because the Democratic Party “harvested votes in urban communities.”

Said Bevin: “The left, those who think of a different ideological bent, they are getting so good at harvesting votes in the urban communities. They were able to go into urban communities where people are densely populated on college campuses and public housing projects.”

Jonathan Bernstein: “It’s still early to project how next year’s congressional elections will go. But the folks at Inside Elections have updated their predictions for 12 House contests in the Democrats’ favor, with only one shifting toward Republicans. It’s a good reminder that unpopular presidents typically drag their parties down.”

“And, yes, President Trump is unpopular. In fact, through 1,048 days, his average approval rating is back to being the very worst of the polling-era presidents. According to FiveThirtyEight, he’s at 41.6%; the next worst at this point was Barack Obama at 44%. Disapproval ratings tell an even worse story: At 53.5%, Trump is the only president through 1,048 days topping 50% (with Obama again the next-worst at 49.7% and no one else above 42%).”

“This is dangerous territory for Republicans. Even if Trump rallies between now and November, it may be too late to help his party much.”

Loeffler presented herself as a lifelong conservative who is “pro-Second Amendment, pro-military, pro-wall and pro-Trump” to counter criticism pitting her as a closet liberal.

Said Loeffler: “I make no apologies for my conservative values and will proudly support President Trump’s conservative judges.”

“Soon-to-be Republican Sen. Kelly Loeffler plans to spend $20 million of her own money on her 2020 Senate campaign in Georgia — a massive sum that could give potential rivals pause about trying to unseat her,” Politico reports.

The lengthy email repeated an unsupported accusation that Omar secretly works for the country of Qatar and should be gravely punished for it.

Said Buck: “We should hang these traitors where they stand.”

Paul Krugman: “In 1990, today’s red and blue states had almost the same life expectancy. Since then, however, life expectancy in Clinton states has risen more or less in line with other advanced countries, compared with almost no gain in Trump country. At this point, blue-state residents can expect to live more than four years longer than their red-state counterparts.”

“Is this all about deaths of despair in the eastern heartland? No. Consider our four most populous states. In 1990, Texas and Florida had higher life expectancy than New York and almost matched California; today, they’re far behind.”

“What explains the divergence? Public policy certainly plays some role, especially in recent years, as blue states expanded Medicaid and drastically reduced the number of uninsured, while most red states didn’t. The growing gap in educational levels has also surely played a role: Better-educated people tend to be healthier than the less educated. Beyond that, there has been a striking divergence in behavior and lifestyle that must be affecting mortality. For example, the prevalence of obesity has soared all across America since 1990, but obesity rates are significantly higher in red states.”

“One thing that’s clear, however, is that the facts are utterly inconsistent with the conservative diagnosis of what ails America.”

Jeff Greenfield: “If Biden does not falter in the early going, what’s the rationale for turning to Bloomberg as the Great Moderate Hope?”

“If Bloomberg were to somehow prevail at a multi-ballot convention, Sanders and Warren supporters might well take a walk. If his strategy of bypassing the early states were to work, would Democrats in Iowa, New Hampshire, and Nevada really work hard to the candidate who rendered their privileged positions null and void? (Disclosure: I find the possibility of ending the Iowa-New Hampshire dominance an argument for the Bloomberg campaign.)”

“And would voters be repelled by the sheer immensity of his spending, as New York City voters were in 2009 when their discontent with his ‘purchase’ of an exemption to term limits almost cost him a third term?”

“So instead consider this not a prediction, but a modest notion: Mike Bloomberg’s campaign is a ludicrous exercise. But maybe not quite as ludicrous as we think.”

Walker’s campaign paid for two polls in recent weeks, testing his chances against both Tillis and Rep. Ted Budd (R-NC).