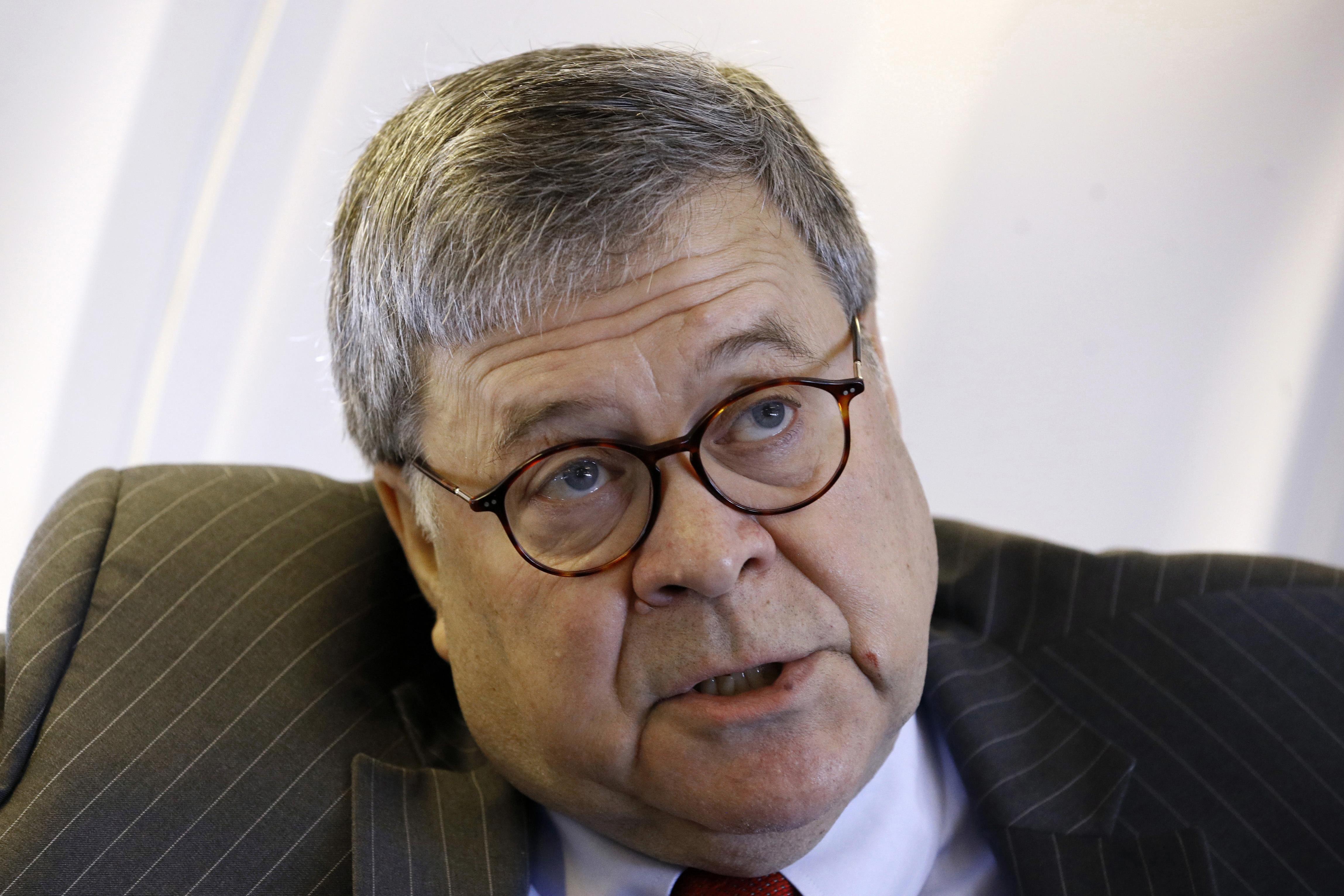 “House Republicans plan to argue that President Trump was acting on ‘genuine and reasonable’ skepticism of Ukraine and ‘valid’ concerns about possible corruption involving Americans, not political self-interest, when he pressed the country for investigations of his Democratic rivals, according to a draft of a report laying out their impeachment defense,” the New York Times reports.

“In a 123-page document that echoes the defiant messaging that Mr. Trump has employed in his own defense, the Republicans do not concede a single point of wrongdoing or hint of misbehavior by the president.”

“The U.S is ‘likely’ to bring additional charges in a case against Lev Parnas and Igor Fruman, associates of Rudy Giuliani who are accused of skirting campaign contribution limits as part of a plot to oust the American ambassador to Ukraine,” Bloomberg reports.

“Attorney General William Barr has told associates he disagrees with the Justice Department’s inspector general on one of the key findings in an upcoming report — that the FBI had enough information in July 2016 to justify launching an investigation into members of the Trump campaign,” the Washington Post reports.

“The Justice Department’s inspector general, Michael Horowitz, is due to release his long-awaited findings in a week, but behind the scenes at the Justice Department, disagreement has surfaced about one of Horowitz’s central conclusions on the origins of the Russia investigation. The discord could be the prelude to a major fissure within federal law enforcement on the controversial question of investigating a presidential campaign.”

President Trump falsely claimed Ukraine’s president had cleared him of wrongdoing in an interview with Time magazine. Said Trump: “The President of Ukraine has just again announced that President Trump has done nothing wrong with respect to Ukraine and our interactions or calls.”

Trump also criticized House Democrats on Monday for scheduling a key impeachment hearing during his trip to London for a NATO meeting, CNBC reports. Also, back in fact filled reality land, population zero Republicans, back 20 years ago, House Republicans conducted impeachment proceedings against President Bill Clinton while he was on several overseas trips too. So really, ignore everything Trump and his Republican minions say, for it’s all lies.

The White House announced that it will not participate in the House Judiciary Committee’s impeachment hearing on Wednesday — but left open the prospect of participating in future hearings, Politico reports.

Matthew Yglesias: “While the media, understandably, focuses on Trump’s many scandals, his administration has quietly enacted a far more aggressive agenda than his Republican predecessors. Big boosts to fossil fuel production have come at the expense of an unprecedented deterioration in air quality. Tens of thousands of people have lost health insurance by administrative fiat, and millions are in the process of losing their nutritional assistance through the same mechanism. He’s remade the judiciary, installing conservative judges at twice Obama’s pace, and he’s consolidated a conservative majority on the Supreme Court that may endure for decades.”

“Tax changes were Trump’s biggest legislative accomplishment, creating a huge windfall for wealthy shareholders and small gains for the middle class — with revenue losses much larger than initially forecast. He’s also undertaken significant but little-noticed alternations in supervision of Wall Street that increase the riskiness of the banking system, plus drastic changes to immigration policy that go far beyond wall construction.”

“The immigration changes align with Trump’s main campaign themes, even if they don’t line up in detail with what he promised. But much of this amounts to delivering for big business and the wealthy in a much more dramatic way than his “populist” positioning would indicate. Promises to voters to protect clean air, provide better health care, crack down on banks, and tax the rich have fallen entirely by the wayside.”

Rep. Zoe Lofgren (D-CA), who helped draft an article of impeachment against Nixon as a congressional staffer and served on the House Judiciary Committee during President Bill Clinton’s impeachment, told CNN that she thinks that President Trump’s actions involving Ukraine are “far more serious” than Watergate.

Said Lofgren: “President Nixon’s misconduct related to trying to use the levers of government to hide the Watergate burglary… His misconduct had to do with trying to throw the election but at least it didn’t involve involving other foreign nations. If you take a look at the — what the founding fathers were concerned about, it was the interference by foreign governments in our political system that was one of the gravest concerns. Nixon’s behavior didn’t fall into that range. So in that way, this conduct is more serious.”

Speaker Nancy Pelosi is attending the UN climate change conference in Madrid this week and told reporters she would not discuss the impeachment inquiry while she was abroad, NBC News reports.

Just Security has a thorough debunking of President Trump’s claim of a phone call with Ambassador Gordon Sondland in which the president denied any quid pro quo between Ukrainian military aid and an investigation of Joe Biden and his son.

Molly Jong-Fast: “It’s not often that you interview a subject who has no interest in being famous. But recently, I did just that when I sat down with Lisa Page the week before Thanksgiving in my hotel room in Washington. Page, of course, is the former FBI lawyer whose text-message exchanges with agent Peter Strzok that belittled Donald Trump and expressed fear at his possible victory became international news. They were hijacked by Trump to fuel his ‘deep-state’ conspiracy.”

“For the nearly two years since her name first made the papers, she’s been publicly silent (she did have a closed-door interview with House members in July 2018). I asked her why she was willing to talk now. ‘Honestly, his demeaning fake orgasm was really the straw that broke the camel’s back,’ she says. The president called out her name as he acted out an orgasm in front of thousands of people at a Minneapolis rally on Oct. 11, 2019.”

Playbook: “We’ve covered a lot of December legislative nightmares. This one might be the worst. Not only are there a ton of issues, but there are also a ton of explosive and contentious issues on a collision course. The White House is under siege, and the Democratic majority is trying to do backflips on a tightrope. Time is a precious commodity, as is political capital, and everyone is going to try to maximize both.”

“It’s folly at this point to predict what might happen, because no one has any clue.”

New York Times: “Jay Sekulow is a real lawyer, and he plays one on TV. Mr. Sekulow, the coordinator of President Trump’s personal legal team, does not have an office in the White House. He is best known as a prodigious fund-raiser on evangelical television and a litigator for the Christian right, not for handling criminal prosecutions or executive power disputes. In 2016, Mr. Sekulow said he voted for Hillary Clinton, according to people close to him.”

“Yet with the House Judiciary Committee set to begin impeachment hearings on Wednesday and Mr. Trump enmeshed in legal battles on other fronts — like his tax returns, claims of immunity from prosecution and elements of his immigration and health care policies — Mr. Sekulow has emerged as one of Mr. Trump’s most trusted advisers and loyal defenders in the news media.”

Wall Street Journal: “President Trump heads to a meeting of the North Atlantic Treaty Organization this week, seeking to showcase his work on the world stage as the impeachment inquiry continues at home.”

“Mr. Trump, who as a candidate labeled the alliance obsolete, has upended past gatherings with his complaints that members must spend more on defense. But his White House struck a more conciliatory tone ahead of the Dec. 3-4 meeting to mark NATO’s 70th anniversary, taking credit for increased military spending by member countries and declaring that the ‘trans-Atlantic relationship is in a very, very healthy place.’”

A senior House GOP aide told Axios to look for Rep. Doug Collins of Georgia, the top Republican on the Judiciary Committee, to engage Chairman Jerry Nadler with “a bunch of procedural maneuvers.”

Collins prides himself on mastery of process and rules, and he will rely heavily on Reps. Jim Jordan of Ohio and John Ratcliffe of Texas to engage on substance.

“Impeachment is bringing out President Trump’s instincts as marketer in chief, as he seeks to turn a perilous, shame-inducing inquiry into an aggressive fundraising and mobilization tool,” Axios reports.

“Democrats competing for the chance to challenge Trump in the general election are getting a preview of how he may seek to upend and monetize their arguments against him.”

“From merchandise to rally rhetoric to paid media strategy, a campaign official tells Axios that a lot of the ideas for responses are being generated by Trump himself.”

“President Trump announced tariffs, effective immediately, on all steel and aluminum shipped into the United States from Brazil and Argentina,” the Washington Post reports.

“The surprise announcement came after it appeared that the White House was preparing to dial back its adversarial trade approach in the months leading up to next year’s elections. The administration appeared close to a deal with House Democrats to revamp the North American Free Trade Agreement, and tensions with China had eased in recent weeks.”

“The Trump administration proposed tariffs of up to 100% against $2.4 billion of French imports, saying the tariffs are justified because of a new digital-services tax imposed by France that weighs heavily on U.S. technology companies,” the Wall Street Journal reports.

Washington Post: “Monday’s protectionist flurry came as the president’s ‘America First’ trade policy remains bogged down at the negotiating table and on Capitol Hill less than a year before the 2020 election.”