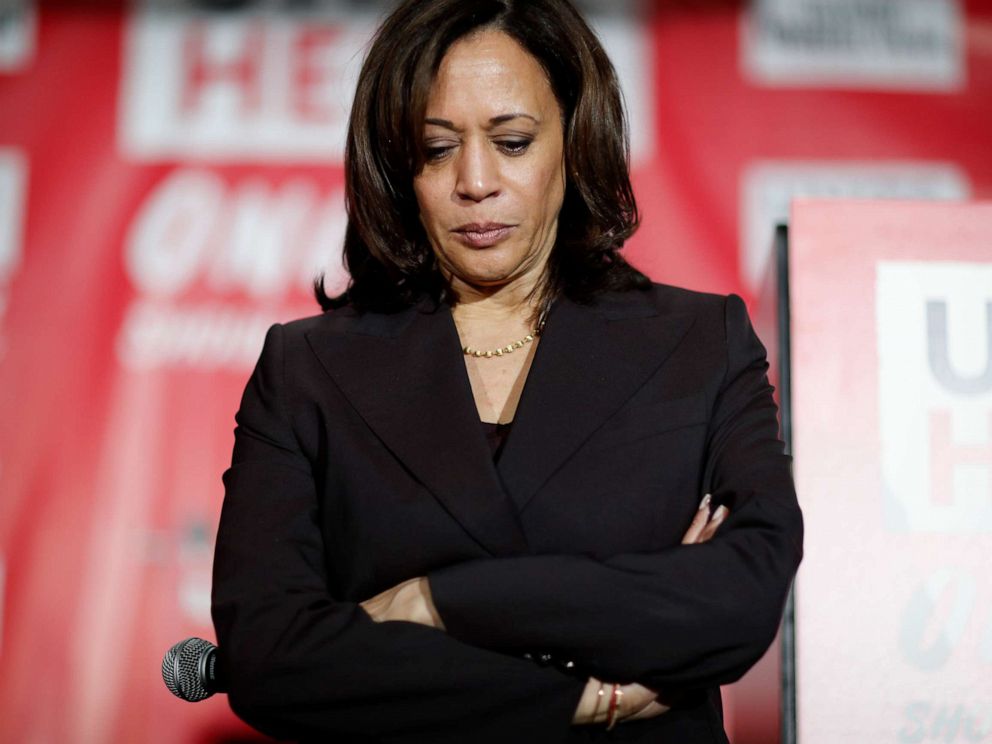 Sen. Kamala Harris is ending her bid for the Democratic presidential nomination, the Washington Post reports.

Harris had qualified for the December debate but was in single digits in both national and early-state polls.

New York Times: “The decision to drop out of the race comes after upheaval among staff and disarray among Ms. Harris’s own allies. She told supporters in an email on Tuesday that she lacked the money needed to fully finance a competitive campaign.”

Matt Viser: “With Kamala Harris out, the debate stage in December at this point will be all white candidates. Striking for a field that was historically large and historically diverse.” Here’s who has qualified: Biden, Buttigieg, Klobuchar, Sanders, Steyer, and Warren. I have seen this complaint today a lot. Well, then liberals and Dems and progressives, if it bothers you that Booker or Patrick or Harris is not on the debate stage, why aren’t you supporting them and donating to them? They are not on the stage or in the race anymore because they are not getting support for their campaigns and there is nothing racial about it.

Today’s plea deal for Rep. Duncan Hunter (R-CA) means that the first two members of Congress to endorse Donald Trump for president in 2016 will be convicted criminals. Hunter and Rep. Chris Collins (R-NY) both backed Trump in February of that year.

Stuart Rothenberg: “For now, there is simply no empirical reason to believe that Trump will win next year… All we can safely say is that polls continue to confirm that Trump is in deep trouble, with a job approval rating that no incumbent president seeking reelection would want.”

Dallas Morning News: “The poll also shows [Beto O’Rourke] in a near-tie, trailing Sen. John Cornyn 46% to 42% at this point [that is not a near tie], which is far stronger than others already seeking the nomination.”

“O’Rourke’s campaign operation has gone dormant. He didn’t respond to messages on Monday and hasn’t said lately whether he’s interested… During his presidential campaign, O’Rourke said flatly and repeatedly that he would not even consider running for the Senate in 2020.”

New York Times: “If Mr. Biden retains his strength with black voters, he’d have a structural advantage in the nomination race that is greater than his uneven lead in national polls suggests.”

“While Iowa and New Hampshire may generate political momentum for a winner because they vote first, the two states award very few delegates. By contrast, a candidate who is popular in California, Texas and predominantly black districts in the South could pick up big shares of delegates.”

“Some of the most delegate-rich districts in Southern states like Tennessee, Alabama and South Carolina have large shares of black Democratic voters… Under party rules, more delegates are awarded in districts with high concentrations of Democrats. Because black people overwhelmingly vote Democratic, areas with many black residents tend to have higher numbers of Democratic delegates. This is a big reason why black Democrats are so sought-after in the race for the party’s nomination.”

In two new national polls appearing today, former New York Mayor Michael Bloomberg is experiencing a jump in support attributable to his massive ad spending. In the huge Morning Consult tracking poll, Bloomberg’s up to 5.3 percent. Last week in the same survey he was at 2.4 percent. Similarly, in the HarrisX/Hill poll, he’s doubled his support from three percent two weeks ago to six percent now.

Politico: “Biden reiterated that he asked Obama not to endorse him, and he stuck by that stance even when asked whether he’d want Obama’s backing if the field narrowed to three people.” Said Biden: “No, because everyone knows I’m close with him. I don’t need an Obama endorsement.”

Joe Biden said that his fast-rising rival Pete Buttigieg “stole” the former vice president’s healthcare policy proposals, Reuters reports. Said Biden: “He stole it. What would you have done to me? You’d have torn my ears off.”

Politico: “Having failed to gain traction with African American voters so far this campaign, Buttigieg’s campaign is taking a different approach to his three-day swing through South Carolina: Keep it small. The South Bend, Ind., mayor opted for largely invitation-only roundtables and private sit-downs with African American leaders in the state, where the Democratic electorate is majority-black.”

“It’s a strikingly different approach to the one Buttigieg takes in the first two early states, where he has surged into a group of four frontrunners in recent polling — and where he has seven public town halls scheduled over four days later this week, for example. But as Buttigieg tries to break in with African American voters, he’s leaning on ‘very, very intimate’ settings, said Matt Bowman, who hosted Buttigieg at his vineyard in Round O, S.C., for a conversation on black entrepreneurship with two dozen people.”

“A month after ending his presidential campaign, Democrat Beto O’Rourke has turned his attention to state politics — namely, an effort to help flip the Texas House of Representatives from Republican control to the Democrats,” the Houston Chronicle reports.

“With Texas Democrats nine seats away from retaking the majority of seats in the Texas House, O’Rourke is trying to convince his donor base to send money to an organization called Flip The Texas House, which has targeted 17 House Districts in which Republican candidates won by fewer than 10 percentage points last year. More than half are districts in which O’Rourke won the majority of votes as he ran for U.S. Senate.”

“Joe Biden took in more than $15 million for his White House run over the past two months, a sum that shows the former vice president’s fundraising operation has rebounded slightly after a lackluster summer in which he trailed his leading rivals,” the AP reports.

“Secretary of State Mike Pompeo has reached out to Sheldon Adelson, the Republican Party’s largest donor, in recent weeks to ‘gauge interest’ in his potential run for an open Senate seat in Kansas next year,” McClatchy reports.

“It is the latest evidence of Pompeo’s outreach campaign to rally donor support around a potential Senate bid, following similar conversations with Charles Koch, a Kansas resident, as well as donors affiliated with the American Israel Public Affairs Committee.”