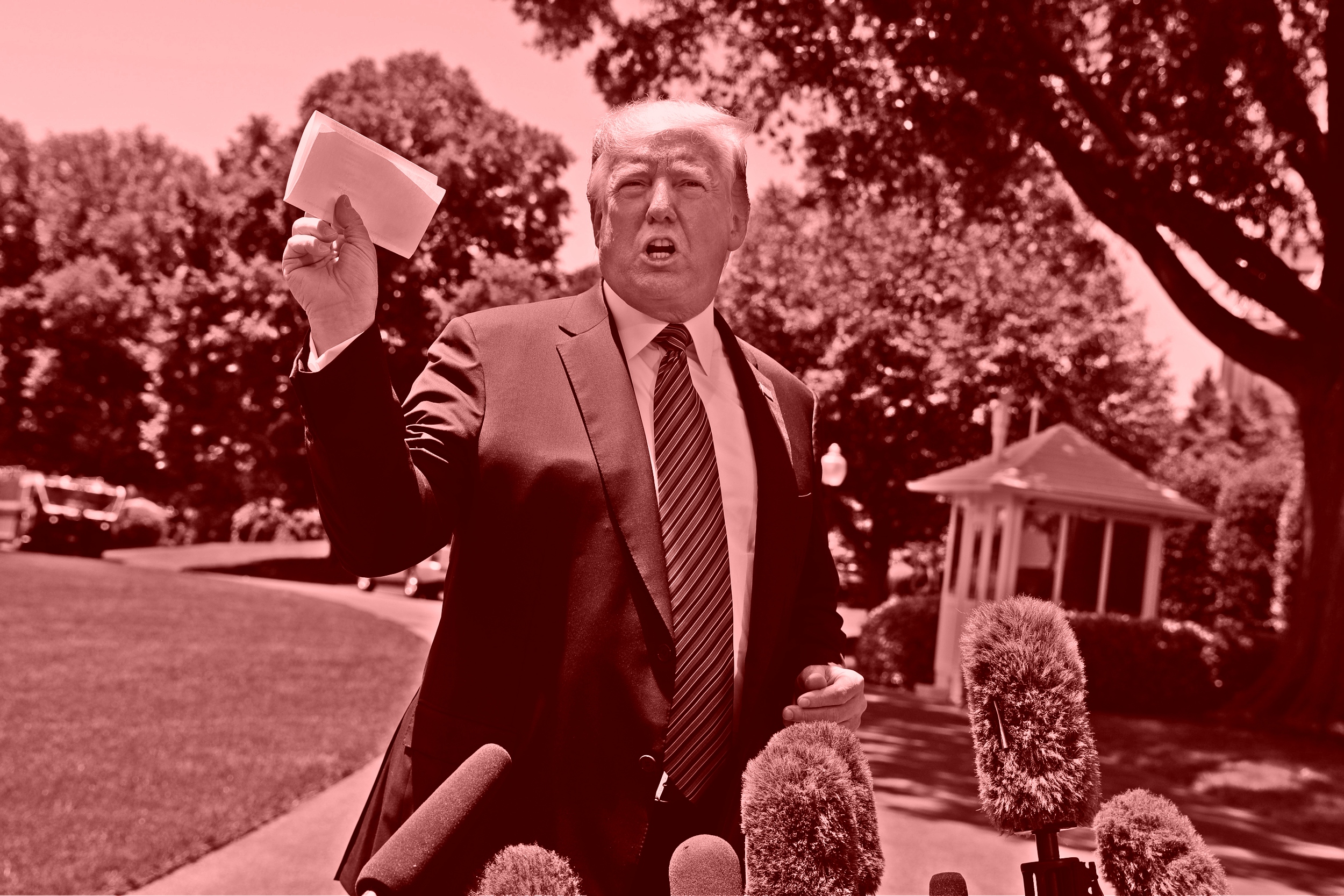 “The Office of Management and Budget’s first official action to withhold $250 million in Pentagon aid to Ukraine came on the evening of July 25, the same day President Trump and Ukrainian President Volodymyr Zelensky spoke on the phone,” CNN reports.

“President Trump had already been briefed on a whistle-blower’s complaint about his dealings with Ukraine when he unfroze military aid for the country in September,” the New York Times reports.

“The revelation could shed light on Mr. Trump’s thinking at two critical points under scrutiny by impeachment investigators: his decision in early September to release $391 million in security assistance to Ukraine and his denial to a key ambassador around the same time that there was a ‘quid pro quo’ with Kyiv. Mr. Trump used the phrase before it had entered the public lexicon in the Ukraine affair.”

“Two officials at the White House Office of Management and Budget recently resigned while voicing concerns over the holdup on Ukraine aid, a career employee of the agency told impeachment investigators,” the Washington Post reports.

“Mark Sandy, the only OMB official to testify in the impeachment inquiry, did not name the employees in question.”

“Donald Trump denied directing Rudy Giuliani to go to Ukraine to look for dirt on his political rivals, in an interview with former Fox News host Bill O’Reilly,” Bloomberg reports. Said Trump: “No, I didn’t direct him, but he is a warrior, he is a warrior.” Asked by O’Reilly what Giuliani was doing in Ukraine, Trump said “you have to ask that to Rudy.”

“John Bolton, the former national security adviser to President Trump who resisted efforts to pressure Ukraine for help against domestic political rivals, dashed any expectation on Tuesday that he would testify soon in the House impeachment investigation in response to a court ruling involving a onetime colleague,” the New York Times reports.

“Charles Cooper, a lawyer who represents Mr. Bolton, said that a court decision on Monday ordering another former White House official to appear before Congress under subpoena did not apply to Mr. Bolton because of the nature of his job. Mr. Cooper said Mr. Bolton would therefore wait for another judge to rule in a separate case that could take weeks more to litigate.”

As expected, the Justice Department has filed an appeal to yesterday’s ruling that former White House counsel Don McGahn must comply with a congressional subpoena.

Bolton then tweeted: “It probably goes without saying, that our country’s commitment to our national security priorities is under attack from within. America is distracted. Our enemies are not. We need to make U.S. national security a priority.” Then testify you bastard. Help remove Trump.

Sen. John Kennedy (R-LA) walked back comments supporting the debunked theory that Ukraine hacked the DNC server in 2016 in a CNN interview. Said Kennedy: “I was wrong. The only evidence I have, and I think it’s overwhelming, is that it was Russia to tried to hack the DNC computer.”

Fine. Go on Fox & Friends and say that. Go to President Trump and tell him personally.

Politico: “President Trump came into office vowing to unshackle his military commanders from years of Obama-era micromanagement. But now he’s facing a rupture with his Pentagon leaders after steamrolling them on a series of decisions — from Mideast troop movements and the use of military funds for a border wall to disciplinary cases involving individual commandos.”

“Even before Navy Secretary Richard Spencer’s forced ouster this weekend, a handful of the Pentagon’s highest-ranking officials have been debating just when they would feel compelled to resign over what they see as Trump’s disregard for the chain of command.”

“Speaker Nancy Pelosi said Monday that House Democrats and the Trump administration have worked out their issues on the USMCA, but she wants to see it in writing before declaring victory,” Politico reports.

“President Trump has made his son-in-law Jared Kushner the de facto project manager for constructing his border wall, frustrated with a lack of progress over one of his top priorities as he heads into a tough reelection campaign,” the Washington Post reports.

“Kushner convenes biweekly meetings in the West Wing where he questions an array of government officials about progress on the wall, including updates on contractor data, precisely where it will be built and how funding is being spent. He also shares and explains the president’s demands with the group.”

“Subpoenas issued to people with ties to President Trump’s personal lawyer, Rudy Giuliani, and his associates indicate a broad federal investigation into possible money laundering, obstruction of justice and campaign-finance violations, and suggest that prosecutors are looking closely at the work of Mr. Giuliani himself,” the Wall Street Journalreports.

Meanwhile, the Washington Post reports the federal investigation into two associates of Giuliani “is exploring a wide range of potential crimes — including wire fraud and failure to register as a foreign agent — as prosecutors dig into the pair’s interactions with the president’s personal lawyer and the main pro-Trump super PAC.”

“David Pecker, the head of the company that publishes the National Enquirer, has spoken with prosecutors with the New York district attorney’s office as part of its investigation into the Trump Organization’s handling of hush money payments to women who alleged affairs with President Trump,” CNN reports.

“The America Media Inc. chairman’s late October meeting with prosecutors from the major economic crimes bureau could provide key details on discussions that took place involving Stormy Daniels, the adult film star who allegedly had an affair with Trump, and agreements that were made with former Trump lawyer Michael Cohen.”

When asked if President Trump acted appropriately in his handling of Ukraine, CNN notes Senate Majority Leader Mitch McConnell sidestepped the question: “Like I said we’ll deal with the matter when it comes to the House as we’re supposed to.”

But he added: “I can’t imagine a scenario under which 67 members of the senate would remove a president from office in the middle of a presidential election… We will take it up, because we have no choice.”

Benjamin Wittes and Quinta Jurecic: “In the absence of any prospect of a sufficient bloc of Republicans voting to remove the president, it’s easy to write off the impeachment process as meaningless. It’s not. Done properly, the House’s amassing of a record and the Senate’s trial of the president will create a vivid account of Trump’s abuses of power and criminality on the national stage. It will force Republicans to shackle themselves to those abuses in support of the president. The stakes of whether a majority of voting Americans will vote for a party that has done so—or at least a majority in the states necessary to swing the Electoral College—are high. But a Senate trial of the president will pose the matter to the electorate with the starkness it deserves.”

“It will make Senate Republicans cast a vote for the proposition ‘LOL nothing matters ¯\_(ツ)_/¯’—thereby enabling the 2020 electorate to evaluate nihilism as the governing philosophy of a political movement.”

More than 60 doctors have signed an open letter expressing “serious concerns about the physical and mental health of Julian Assange,” who is being held at a high-security British prison, the Washington Post reports. They say he could die in prison.

The White House asked Sen. Lindsey Graham (R-SC) to block the resolution that would have formally recognized Turkey’s genocide of the Armenian people, Axios reports.

Graham was leaving the Oval Office after he joined a meeting with Turkish President Recep Tayyip Erdogan when a senior White House staff asked him to object on the floor to the resolution that had passed the House to avoid upsetting Erdogan.