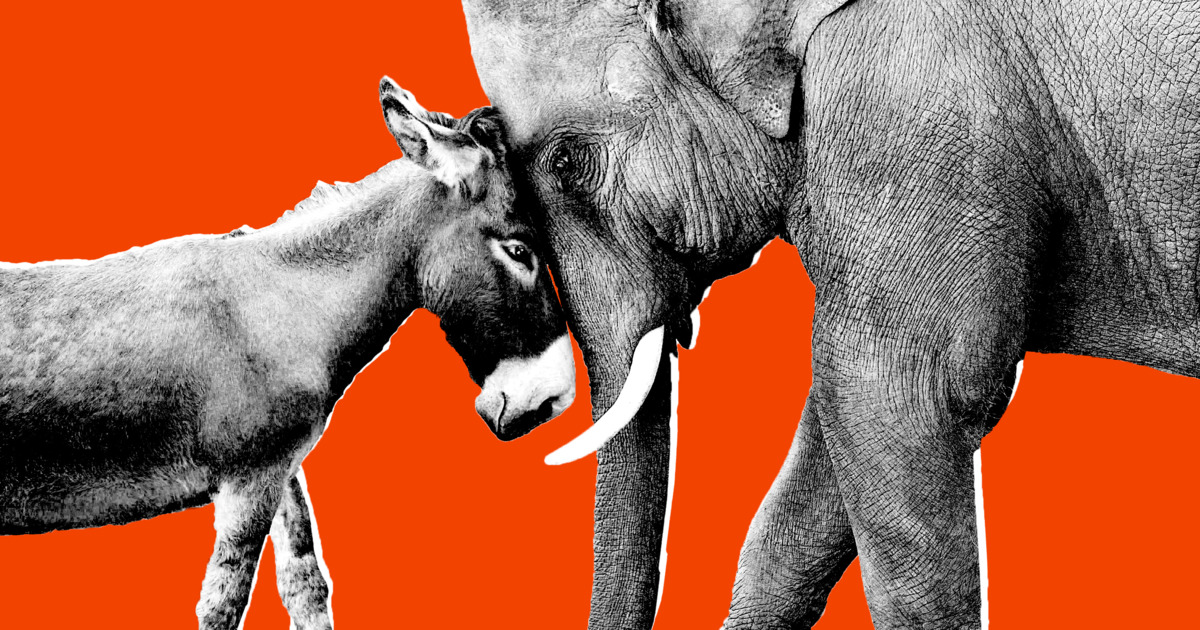 A new CNN poll finds Joe Biden leads the Democratic field with 28% nationally, followed by Bernie Sanders at 17%, Elizabeth Warren at 14% and Pete Buttigieg at 11%. No other candidate reaches 4%, meaning the poll does not result in any changes to the lineup for the December debate.

A new WHDH 7 News/Emerson College poll finds a major shake up in the New Hampshire primary with Bernie Sanders leading with 26%, followed by Pete Buttigieg at 22%. Joe Biden and Elizabeth Warren are at 14%, Tulsi Gabbard is at 6%, and Andrew Yang is at 5%. All other candidates are below 5%.

A new Quinnipiac poll finds Joe Biden leading the Democratic field with 24%, followed by Pete Buttigieg at 16%, Elizabeth Warren at 14% and Bernie Sanders at 13%.

They are followed by Michael Bloomberg, Kamala Harris and Amy Klobuchar at 3%. Cory Booker, Andrew Yang, Julian Castro, and Michael Bennet each receive 2%.  No other candidate tops 1%. Eleven percent are undecided.

This represents a 14-point drop for Warren and a 6-point rise for Buttigieg compared to a late October poll. In comparison, Biden and Sanders have remained relatively stable.

Politico: “In a state where fortunes can change on a dime, Pete Buttigieg has seized the momentum in recent weeks as Warren has slipped. Top Iowa Democrats attribute the shift to the scrutiny Warren is receiving as a frontrunner — including attacks from her rivals — as well as her struggles defending her plan to remake the nation’s health care system.”

“And while Warren remained largely off the air until this month, Buttigieg has carpet-bombed the state with digital and TV ads, boosting his name ID. The South Bend mayor also delivered a standout speech to 13,500 Democrats at a marquee political event early this month.”

Wall Street Journal: “The comparisons the mayor draws with Mr. Obama are designed to bolster the notion that his candidacy is also historic—he’d be the first openly gay man to occupy the White House—and that voters shouldn’t shy away from him just because he doesn’t have years of Washington experience.”

“There are other clear similarities between the Obama and Buttigieg White House bids: Midwest ties, an overt outreach to Republicans, presentations that can be professorial at times and calls for generational change (Mr. Obama was nine years older during his campaign than Mr. Buttigieg is now). When Mr. Buttigieg talks about being “impatient” for changes in Washington, that is reminiscent of the “fierce urgency of now” Mr. Obama talked about in 2007 and 2008 as he cited the Rev. Martin Luther King Jr.”

CBS News: “Joe Biden’s opposition to pot has apparently gone up in smoke. The 2020 Democratic presidential candidate and former vice president on Monday rolled back his stance that marijuana is a ‘gateway drug’ — and wrongly claimed that he had never said so in the first place.”

Said Biden: “I don’t think it is a gateway drug. There’s no evidence I’ve seen to suggest that.”

“Penn came to the Oval Office for more than an hour last Monday, three people familiar with the meeting said, and brought polling data and impeachment advice for the president. Penn reassured Trump that he wouldn’t be removed from office, and encouraged him to travel the country like Clinton did when he was fighting impeachment over 20 years ago.”

Penn is otherwise known as the horrible strategist and pollster that doomed Hillary’s campaign in 2008.

Michael Bloomberg’s debut 2020 campaign ad touts that he “took charge” of New York City in the wake of 9-11, Politico reports.

“What Bloomberg doesn’t mention: He leaned heavily on an endorsement from Rudy Giuliani, the then-New York City mayor who is now President Trump’s personal attorney, to win that post. Bloomberg trumpeted his support in TV advertising and direct mail, chastising his Democratic opponent for being ‘no friend of Rudy Giuliani.’”

“Giuliani is just one of many skeletons in Bloomberg’s partisan closet. As he pursues the Democratic nomination, he’ll have to explain away the millions he’s spent putting Republicans into office, including contributions backing more than a dozen current and former Republican members of Congress.”

“But the private huddle turned tense and ended quickly… Mr. Trump has preferred Rep. Doug Collins, a Republican who has vocally defended the president during the impeachment process, and he told Mr. Kemp that he would be taking a risk by appointing the politically untested Ms. Loeffler. At one point Mr. Trump questioned why they were holding the meeting if Mr. Kemp had made his decision.”

John Ellis: “There are two ways things can go in the ‘electability’ half of the bracket. Biden can win by default… Or he can get crushed in Iowa and New Hampshire by a 37-year-old gay mayor from South Bend, Indiana, and as a result, watch his candidacy collapse. The latter outcome would leave Buttigieg as the commander of the ‘electability’ army, which (assuming the polling is accurate) enjoys an overwhelming numerical advantage over the ‘progressive’ battalions.”

“It’s on the latter scenario that Mr. Bloomberg’s candidacy hinges. His handlers are presuming that having seen Mr. Biden dispatched and Mr. Buttigieg all-but-anointed, the Democratic primary electorate in the Super Tuesday states (and beyond) would recoil with buyer’s remorse and scramble to find a more ‘suitable’ (meaning ‘not gay,’ although no one will ever admit it) replacement.”

“And there waiting for them, with literally billions of dollars ready to spend and open arms, would be Michael Bloomberg: Calm, competent, uncharismatic, efficient, former Republican, ruthless billionaire Michael Bloomberg, with an unholy host of political consultants and pollsters ready, willing and able to fan out across every last cable news show to explain why, beyond a shadow of a doubt, Mike Bloomberg was the most electable Democrat in November.”

Politico: “What Bloomberg contemplates is not so much an exercise in threading the political needle as pulverizing that needle as it has existed for decades.”

Said adviser Kevin Sheekey: “We’re just going to rewrite a new system. Our theory of the case is that we’re going to skip the first four early states and we’re going to run as intensive a campaign’ in other Democratic states as rivals do in Iowa and New Hampshire. That plan kicks in with the March 3 run of Super Tuesday states, but won’t stop there. We’re going to do it all across the country.”

“Yes, most candidates participate in the debates, but that is because they need the exposure. Bloomberg won’t. Let’s say that the debates are worth $20 million in free media. To Bloomberg, that is pocket change. He is better off having the airwaves to himself in California to define his candidacy rather than allowing Tulsi Gabbard to take potshots at him on the debate stage.”

Washington Post: “Although he may seem unpredictable, Chinese officials are betting that Trump’s transactional approach to politics might be preferable to a more principle-driven president, whether Democrat or Republican.”

Said one politically connected person in Beijing: “Trump is a businessman. We can just pay him money and the problems will be solved. As long as we have money, we can buy him. That’s the reason why we prefer him to Democrats.”

“According to a CNBC analysis, Bloomberg has spent $13.2 million on television ads across the 14 Super Tuesday states in his first week as a candidate. That’s more than his competitors’ combined ad spending in those states for the entire primary to date. “

The Independent: “Fewer than 120,000 anti-Brexit tactical votes in the right seats could deny Boris Johnson an overall majority in the House of Commons, new polling suggests.”

“A large-scale survey of almost 40,000 voters found that Conservatives are heading for 366 seats in the House of Commons, giving Mr Johnson a comfortable majority of 82.”

“But analysis for the Best for Britain campaign for a second EU referendum found that in 57 seats, the Tory candidate could be defeated by 4,000 or fewer anti-Brexit voters voting tactically.”

New York Times: “Since late summer, Mr. Biden, the early front-runner in the Democratic primary, has faced an increasingly difficult path in Iowa — dropping in the polls and struggling with an enthusiasm gap and an inclination among undecided caucusgoers to consider all options. Now, 10 weeks before the Iowa caucuses, even his own supporters in the state are growing more worried about his prospects.”

“The heightened anxiety comes as the candidate and campaign are raising expectations, through new investments of time and resources, about his ability to compete here, an implicit acknowledgment that a substantial loss could be a significant early setback.”

“Voters at Mr. Biden’s events, along with county chairs and party strategists, characterize his on-the-ground organization as scattershot, visibly present in some counties but barely detectable in others. His events are often relatively small and sometimes subdued affairs, and in a state where enthusiasm can make or break a candidate on caucus night — a big part of caucusing centers on persuading friends and neighbors — Mr. Biden’s operation has found it difficult to build contagious excitement, these Democrats say.”