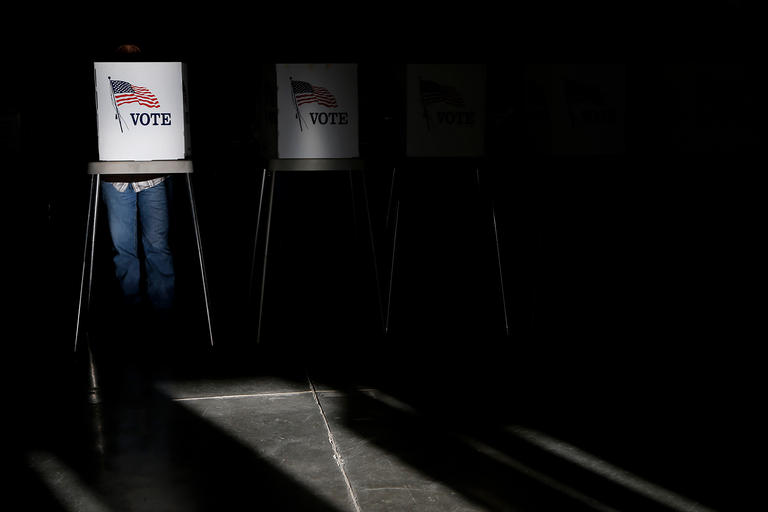 After five days of public hearings in House Democrats’ impeachment inquiry into Donald Trump, public opinion over whether the President ought to be impeached and removed from office remains exactly the same as it was in October, according to a new CNN poll. 50% of all Americans say Trump should be impeached and removed from office, 43% say he should not.

A new HuffPost/YouGov poll finds the “public is nearly evenly split on whether Trump should be removed from office, the survey found, with 45% saying he should and 42% that he should not. That’s nearly identical to the results of a survey taken a week earlier, and within the range of 44% to 48% shown in HuffPost/YouGov polling since September.”

However, the FiveThirtyEight Polling Average on Impeachment is actually ticking up as more impeachment polls come in, and thus undermining the Republican talking point that the numbers are moving against Democrats: 49% support impeaching and removing President Trump while 44% do not.

A new CNN poll finds 53% of Americans think that President Trump had used his office improperly, up from 49% in October, and 56% said Trump’s attempts to persuade Ukraine to investigate former Vice President Joe Biden’s son Hunter was more for personal benefit than to root out corruption.

A new Boston Globe/Suffolk poll in New Hampshire finds Bernie Sanders leading the Democratic presidential field with 16%, followed by Elizabeth Warren at 14%, Pete Buttigieg at 13%, and Joe Biden at 12%.

All other candidates, including former Massachusetts governor Deval Patrick, who jumped in the race this month, were in single digits.

Key takeaway: “The poll suggested little about this race is set in stone. Twenty-one percent of likely voters were undecided. When those who chose a candidate were pressed, more than half said they might change their minds before the primary, while only 43% said their minds were made up.”

A new YouGov/Out magazine survey found that LGBTQ+ voters favor Elizabeth Warren by a nearly 2-to-1 margin over her Democratic rivals in the 2020 primary race.

Seth Masket finds a very strong correlation between presidential approval a year out from the election and vote share.

Based on President Trump’s 2019 approval rates, there are currently just six states that can be considered Toss Ups: Arizona, Florida, Georgia, North Carolina, Pennsylvania and Wisconsin. Trump would need to win nearly all to win re-election.

Ryan Lizza: “When candidates meet with [former President] Obama he usually offers three big points: Don’t run if you don’t think you are the best person to be president; make sure you understand the toll a campaign will take on your family; and ask yourself, ‘Can you win?’

“As he put it recently at a donor event in Washington, ‘Not are you guaranteed a win, but do you have a theory, a pathway whereby you win not just a primary but you also win a general election, because there is not an empty exercise if you, in fact, get in. Your goal should be to actually ultimately become the president and then be able to lead the country and the world in a serious way.’”

“Sometimes he offers candid advice about his visitors’ strengths and weaknesses. With several lesser-known candidates, according to people who have talked to him or been briefed on his meetings, he was blunt about the challenges of breaking out of a large field. His advice is not always heeded. He told [Deval] Patrick earlier this year that it was likely ‘too late’ for him to secure ‘money and talent’ if he jumped in the race. Occasionally, he can be cutting. With one candidate, he pointed out that during his own 2008 campaign, he had an intimate bond with the electorate, especially in Iowa, that he no longer has. Then he added, ‘And you know who really doesn’t have it? Joe Biden.’”

Rep. Dina Titus (D-NV) announced her support of Joe Biden for president, becoming the first sitting member of Congress from an early voting state to issue an endorsement.

Said Titus: “I’ve seen him up close. I’ve worked with him in Congress. I’ve known him for a long time. I think he’s the best qualified to be president of all the good Democratic candidates.”

“Despite military and international backlash to Trump’s Nov. 15 clemency – fallout from which cost Navy Secretary Richard Spencer his job on Sunday – Trump believes he has rectified major injustices. Two people tell The Daily Beast they’ve heard Trump talk about how he’d like to have the now-cleared Clint Lorance, Matthew Golsteyn, or Edward Gallagher show up at his 2020 rallies, or even have a moment on stage at his renomination convention in Charlotte next year. Right-wing media has portrayed all three as martyrs brought down by ‘political correctness’ within the military.”

Politico: “Bloomberg’s absence from the debate stage is no small hurdle for the former Republican… It also sets up an unusual scenario in which Bloomberg could be spending tens of millions of dollars on his campaign through the spring without ever directly confronting the Democrats he argues cannot defeat Donald Trump.

“Bloomberg has signaled that he won’t contest DNC rules governing participation — and isn’t particularly perturbed by missing the debate.”

The chairman of the Arkansas Democratic Party says there’s no path for replacing the challenger to Sen. Tom Cotton (R-AR) after the party’s previous candidate abruptly dropped out following the state’s filing deadline, the AP reports. First off, why is the filing deadline for a race a full fucking year before the election? I would challenge that shit in court. Second off, the Democratic Party in states like Arkansas is embarrassing.

New York Times: “In some Republican circles, the notion of President Trump’s children running for political office is not only a parlor game – it’s a matter of finding the right opportunity for the right Trump. Could that opportunity exist in blue New York? And could it happen now?”

“Some state Republicans are eager to give it a try. With Rep. Peter King, a Republican, not seeking re-election on Long Island next year, the circumstance may never be better for a younger Trump to run. … The buzz around a potential junior Trump candidacy heightened last week, when a poll surfaced in New York that showed Lara Trump winning by more than 30 points in a hypothetical Republican primary for Mr. King’s seat.”

If Gabbard appears on any ticket or in any cabinet imaginations by any candidate, I will not vote. She is an evil Russian agent.

Associated Press: “Interviews with nearly two dozen people who knew [Pete Buttigieg]in his formative years paint a picture of a child with an extraordinary range of talent and ambition, cultivated by a tight-knit family able to indulge his many interests. There were clear signs of the candidate’s earnestness and intensity. Friends and family say he worked to overcome an early shyness by throwing himself into challenges. All the while he felt a bit apart.”

New York Times: “If Mr. Bloomberg’s first in-person appearance as a presidential candidate lacked something in organic political energy, he has already jolted the race through the sheer scale of his political spending, stunning the Democratic political establishment and stirring an outcry from the party’s populist wing. He is airing nearly $1 million in television ads in Virginia alone this week, as part of nearly $35 million in television advertising nationwide. A few bystanders said they had already seen those ads.”

House Minority Leader Rep. Kevin McCarthy (R-CA) unveiled a new addefending President Trump while he remains the subject of an impeachment investigation, The Week reports. However, the ad includes stock footage that appears to have been shot in Russia.

Dallas Morning News: “In a bizarre political blunder, a document laying out the Republican Party of Texas’s election strategy for the 2020 elections has ended up in the hands of Texas Democrats. Attacking Democratic candidates through websites and mitigating ‘the polarizing nature’ of President Trump are part of the plan.”

Politico: “Bernie Sanders insists he has nothing personal against Michael Bloomberg. ‘I really don’t.’ He just thinks he’s trying to ‘buy an election,’ is demonstrating ‘the arrogance of billionaires’ and, as Bloomberg opens his near-bottomless wallet to pay for TV ads, is complicit in ‘undermining’ American democracy.”

“One day after Bloomberg announced his late entry into the Democratic presidential field, Sanders and his progressive allies aren’t holding back. ‘What he believes — and this is the arrogance of billionaires: “Hey, I can run for president because I’m worth $55 billion, and maybe I’ll take $1 billion out of that $55 billion” — not a lot, when you’re worth that much — and … start running a massive amount of TV ads in California and, in fact, all over this country,’ Sanders told reporters after a town meeting with union members in New Hampshire on Monday.”

With the qualification deadline fast approaching for the December Democratic presidential debate, Sen. Cory Booker will seek to boost his flagging poll numbers by “reorienting our entire campaign apparatus into a persuasion effort,” according to a memo obtained by CNN.