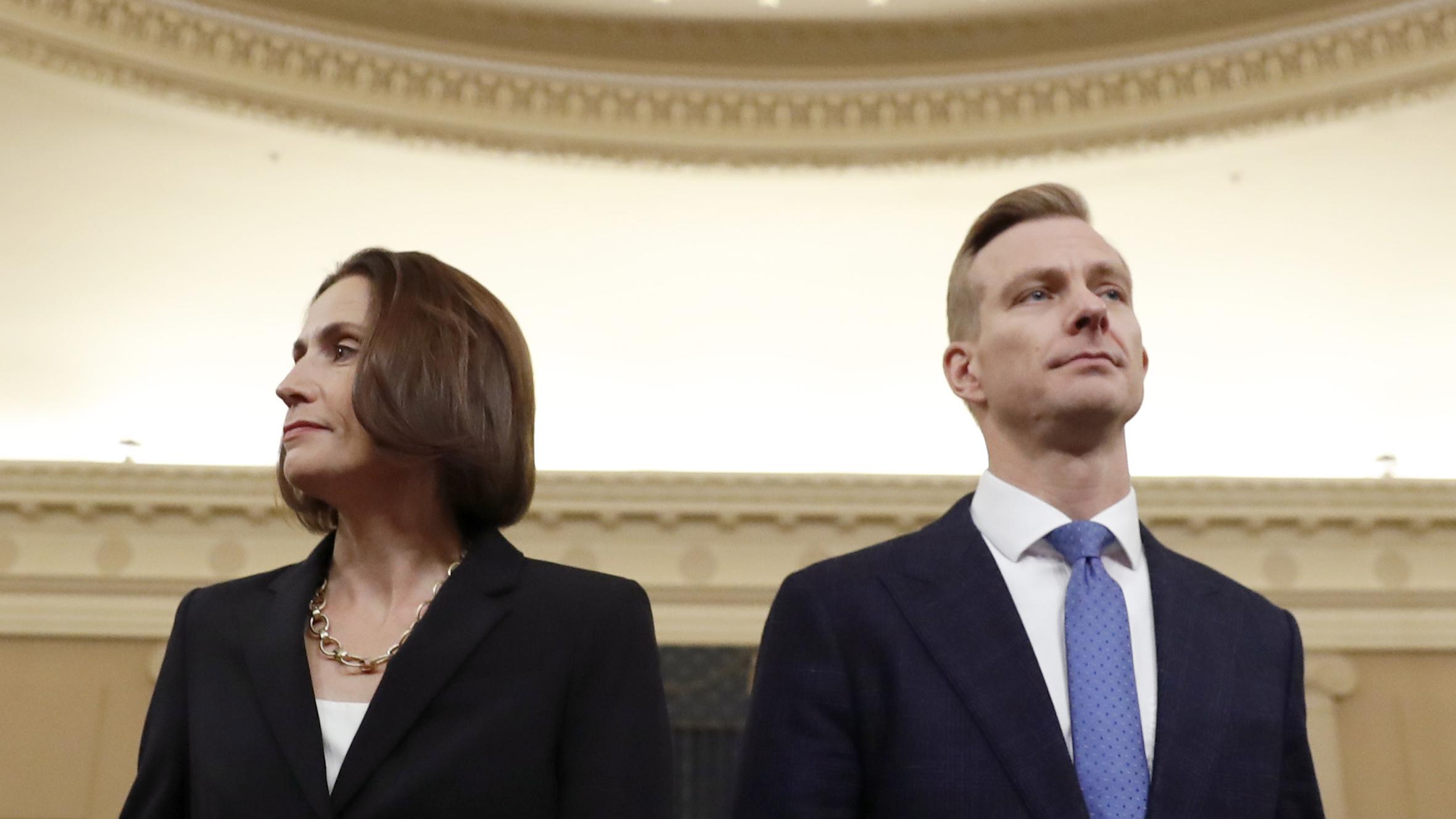 Former National Security Council official Fiona Hill said in her opening statement to the House Intelligence Committee this morning that some lawmakers appear to believe Ukraine, not Russia, sought to interfere in 2016 election: “This is a fictional narrative.”

Says Hill: “I refuse to be part of an effort to legitimize an alternate narrative that the Ukrainian government is a U.S. adversary, and that Ukraine—not Russia—attacked us in 2016. These fictions are harmful even if they are deployed for purely domestic political purposes. President Putin and the Russian security services operate like a Super PAC. They deploy millions of dollars to weaponize our own political opposition research and false narratives. When we are consumed by partisan rancor, we cannot combat these external forces as they seek to divide us against each another, degrade our institutions, and destroy the faith of the American people in our democracy.”

“Fiona Hill’s extraordinary answer about her relationship with the American ambassador to the European Union was ultimately a finely distilled description of what the impeachment hearings are all about: President Trump’s pursuit of a ‘domestic political errand’ that came at the expense of American foreign policy,” CNN reports.

“It was stunning in its clarity, but also that it came during the Republicans’ turn for questioning.”

Banjamin Wittes: “This is a good opportunity to say a few words about Fiona Hill, who has been a Brookings Institution colleague for many years. Fiona is a formidable person—a first-rate mind with genuine and unusual expertise in Russia policy.”

“She was not a Trumpist, in any sense, which made her decision to go into the administration a matter of some surprise among her colleagues. For a serious Russia hand to serve in Trump’s NSC was, after all, quite a leap. I am sure that Fiona has had to make compromises as a result of the contradictions inherent in that decision. (Imagine being a serious Russia person on the NSC during and after Helsinki, for example).”

“But it should be impossible to dismiss Fiona’s testimony as that of a Never Trumper. This is someone who was not a career bureaucrat who was willing—to the confusion of much of her professional cohort—to go into government in a political role to serve under Trump on Russia.”

“One other thing—a warning to the cocky Republican member who may try to be patronizing or think he or she is gonna have a good C-SPAN moment at Fiona’s expense: Fiona is smarter than you. She knows more. And she is impatient with idiocy. You are likely to embarrass yourself.”

In a stunning moment at Thursday’s impeachment hearing, Fiona Hill asked whether she may respond to Republican attacks, after three GOP congressman in a row used their five-minute question allotments to criticize the impeachment inquiry and its witnesses, Axios reports.

Said Hill: “I don’t believe there should be any interference of any kind in our election… That’s actually why as a nonpartisan person and as an expert on Russia and an expert on Vladimir Putin and on the Russian security services, I wanted to come in to serve the country to try to see if I could help.”

David Holmes, a U.S. diplomat in Kyiv, traced in detail the emergence and solidification of Trump lawyer Rudy Giuliani’s pressure campaign, including episodes about the “three amigos” and sharing that he sat in on many “germane” meetings with Ukraine President Volodymyr Zelensky.

Holmes testified to House impeachment investigators on Thursday that Ambassador Gordon Sondland was more than a little frustrated with Trump lawyer Rudy Giuliani as they carried out the pressure campaign against Ukraine. Holmes described how he came to learn about Giuliani’s “direct influence” on the foreign policy agenda in Ukraine that was being implemented by “the Three Amigos”: Sondland, Energy Secretary Rick Perry and then-Special Envoy Kurt Volker.

“In fact, at one point during a preliminary meeting of the inauguration delegation, someone wondered aloud about why Mr. Giuliani was so active in the media with respect to Ukraine,” Holmes said. “My recollection is that Ambassador Sondland stated, ‘Dammit Rudy. Every time Rudy gets involved he goes and f—s everything up.’”

Playbook: “These hearings have practically gone off perfectly for Democrats. First: Bill Taylor surprisingly unveiled in the middle of his hearing that someone heard a call between Trump and Sondland, during which the president mentioned investigations. That person — Holmes– testified privately and is now testifying publicly.”

“Trump attacked Marie Yovanovitch in the middle of her hearing, underscoring one of the Democrats’ central points — that the president was hostile toward a well-regarded U.S. ambassador for seemingly no reason. Sondland unloaded on Trump’s Cabinet — and, indeed, the president. Then, hours later, Cooper — a relatively junior official neither side had particularly high hopes for — brandished new emails showing that Ukraine probably did know about the hold on aid, further helping Democrats.”

First Read: Democrats are winning impeachment inquiry on substance but can they win on politics?

“Prime Minister Benjamin Netanyahu was indicted Thursday on bribery, fraud and breach of trust charges in a set of long-running corruption cases, immediately throwing his political future into doubt and heightening the uncertainty and chaos surrounding Israel’s fitful, yearlong struggle to choose its next leader,” the New York Times reports.

“The cases against Mr. Netanyahu involve allegations of giving or offering lucrative official favors to several media tycoons in exchange for either favorable coverage in news outlets or gifts worth hundreds of thousands of dollars.”

“Mr. Netanyahu is not legally required to step down. But with Israel’s political system already in uncharted territory, having failed to settle upon a new prime minister despite two elections and three attempts at forming a government since April, the criminal case against him could make it far more difficult for him to retain power.”

“President Trump has once again weighed in on potential disciplinary action against Navy SEAL Eddie Gallagher, appearing to override a Navy decision to initiate a review that could result in him being stripped of his status as a SEAL,” CNN reports.

“The Navy’s review could have led to Gallagher’s expulsion from the elite warfare community.”

Tweeted Trump: “The Navy will NOT be taking away Warfighter and Navy Seal Eddie Gallagher’s Trident Pin. This case was handled very badly from the beginning. Get back to business!”

New York Times: “Ms. Haley remains close with the president’s daughter Ivanka and her husband, Jared Kushner, and they warned her to be more careful talking about Mr. Trump, according to two people familiar with the conversation. A spokeswoman for Ms. Haley said she never received such a warning.”

“The U.S. Secret Service paid more than $250,000 to President Trump’s private businesses in just the first five months of his presidency — paying Trump’s company an average of nearly $2,000 per day,” the Washington Post reports.

“The president has set up an extraordinary arrangement: He kept ownership of his businesses — and then visited them repeatedly, bringing along aides and security officials and charging the government for what they bought.”

The New York Times editorial board tells House Democrats to slow down on impeachment.

“Americans shouldn’t be distracted by Republican smoke bombs, but they should also not be satisfied with a truncated inquiry into a question as consequential as whether the president of the United States should be removed from office.”

“It is essential for the House to conduct a thorough inquiry, including hearing testimony from critical players who have yet to appear. Right now, the House Intelligence Committee has not scheduled testimony from any witnesses after Thursday. That is a mistake. No matter is more urgent, but it should not be rushed — for the protection of the nation’s security, and for the integrity of the presidency, and for the future of the Republic.”

Politico: “President Trump is aggressively courting Senate Republicans as impeachment bears down, and on Thursday, he’ll come face-to-face with two of the most unpredictable jurors in any Senate trial: Mitt Romney and Susan Collins.”

“By day’s end, the president will have hosted more than 40 Republican senators at the White House since the fall began, mostly for weekly lunches that address a series of issues but also usually include a side of impeachment. Another group will head to the White House on Thursday, leaving just a handful of Republican senators untended by the president.”

“The flurry of activity highlights the increasingly urgent task at hand for Trump: Making sure that the GOP caucus understands his side of the Ukraine saga, not just through his tweets, but from him personally. If the 47 Democratic Caucus members stay united and vote to remove Trump from office, the president needs the support of as many of the 53 Senate Republicans as possible, both to avoid his removal from office and to keep the party from splintering ahead of his 2020 re-election bid.”

New FEC disclosures show a single large RNC payment of $94,800 to Books-a-Million in October, a few days before Triggered was released, the New York Times reports. An RNC spokesman confirmed that the expenditure was connected to their promotion of Donald Trump Jr.’s book.

New York Times: “Mr. Sondland’s testimony has undercut any notion that Mr. Pompeo, the administration’s most powerful national security official, was not a participant in Mr. Trump’s efforts to pressure Ukraine. It also firmly places him at the center of one of the nation’s biggest foreign policy controversies in nearly two decades, since the debate over the intelligence that led to the war in Iraq.”

“Mr. Pompeo has told associates that he believes the impeachment testimonies are partly aimed at forcing him to play a Washington game that would end with him turning on the president to save his own career. And he refuses to participate, Mr. Pompeo has said.”

“Two attendees said that the White House wants the Senate to hold a trial of some length and not immediately dismiss any articles of impeachment with the GOP’s majority, as some Republicans have suggested. The White House and Trump’s GOP allies decided instead ‘they want some kind of factual affirmative defense on the merits,’ said one attendee.”

The Washington Post says the proceedings in the Senate that could be limited to about two weeks.

Politico: “While Republicans have shown zero signs of breaking with President Donald Trump when it comes to impeachment itself, GOP lawmakers are also making it clear they’re unwilling to fully embrace Trump’s scorched-earth defense tactics, which have centered — at least in part — on tearing down his critics, sometimes against the advice of his own allies and advisers.”

Los Angeles Times: “The defense funding for Ukraine remains in U.S. accounts, according to the document. It’s not clear why the money hasn’t been released, and members of Congress are demanding answers.”