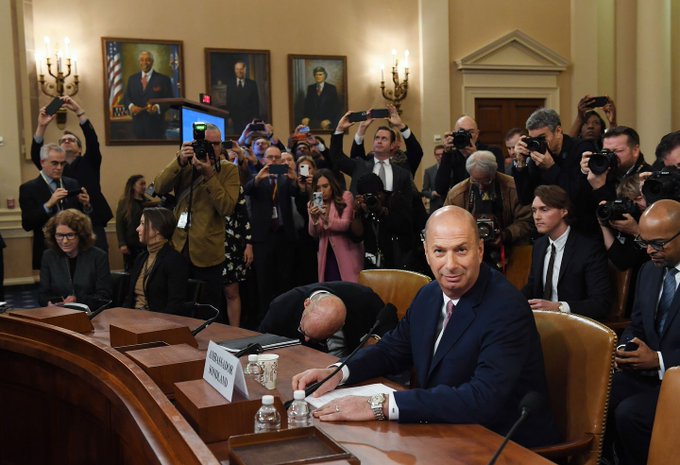 The U.S. ambassador to the European Union testified that he and senior administration officials “followed the president’s orders” to work with Rudy Giuliani to pressure Ukraine into announcing investigations into Joe Biden and the discredited conspiracy theory that the country helped Democrats in the 2016 election. Gordon Sondland testified that he, Energy Secretary Rick Perry, and special envoy Kurt Volker coordinated with Giuliani at the “at the express direction of the president of the United States” to pressure Ukraine into launching the investigations.

Sondland also said he directly communicated the “quid pro quo” arrangement to Ukrainian President Volodymyr Zelensky. Additionally, Sondland provided House impeachment investigators with emails and texts showing that acting chief of staff Mick Mulvaney, Secretary of State Mike Pompeo, Perry, and others were all aware that Trump conditioned a White House meeting for Zelensky on his willingness to launch the investigations. “They knew what we were doing and why,” Sondland said. “Everyone was in the loop. It was no secret.”

The investigation, for all intents and purposes, is over. It is now proven that President has committed a crime of extortion and bribery, and is also guilty of attempting to cover up the crime, and of obstruction of justice in stonewalling the investigation to this day. The President will be impeached on at least three articles of impeachment: Bribery, Abuse of Power, Obstruction of Justice.

“Vice President Pence was informed just before meeting with the president of Ukraine in September that a U.S. ambassador believed that stalled military aid to Ukraine would likely not be released until Ukraine agreed to announce political investigations sought by President Trump,” the Washington Post reports.

“Gordon Sondland, the U.S. ambassador to the European Union, told the House Intelligence Committee that he informed Pence of his fears just before Pence met with Ukrainian President Volodymyr Zelensky in Warsaw on Sept. 1, a meeting where Sondland anticipated that Zelensky was likely to ask about frozen U.S. aid.”

“The testimony is the first indication that Pence may have known that congressionally appropriated funds for security assistance was conditioned on a foreign power agreeing to open investigations to assist Trump’s political prospects.”

New York Times: “Gordon Sondland, the diplomat at the center of the House impeachment inquiry, kept Secretary of State Mike Pompeo apprised of key developments in the campaign to pressure Ukraine’s leader into public commitments that would satisfy President Trump.”

“Mr. Sondland informed Mr. Pompeo in mid-August about a draft statement that Mr. Sondland and another American diplomat had worked on with the Ukrainians that they hoped would persuade Mr. Trump to grant Ukraine’s new president the Oval Office meeting he was seeking.”

When explaining the quid pro quo with Ukraine, Ambassador Gordon Sondland said President Trump was mainly interested in the announcement of investigations by Ukraine President Zelensky into the Bidens.

Said Sondland: “He had to announce the investigations, he didn’t actually have to do them, as I understood it.”

He later added: “The only thing I heard… was that they had to be announced in some form, and that form kept changing… the way it was expressed to me was that the Ukrainians had a long history of committing to things privately and then never following through.”

“In short, a witness with first-hand knowledge of both U.S. interactions with the Ukrainians and the president’s own conduct today accused President Trump of soliciting a bribe from a foreign head of state. Whether or not this would qualify as a bribe under the criminal law, I would have no hesitation describing it as one if I were a member of Congress considering the impeachment of a president.”

Ken Starr, who headed the investigation that led to Bill Clinton’s impeachment, told Fox News that Ambassador Gordon Sondland’s testimony was a “bombshell” and will lead to President Trump’s impeachment.

Said Starr: “There will be articles of impeachment. I think we’ve known that, it was just confirmed today. Substantively, what we heard from the chairman just now is: It’s over. We now know — this is his position — we now know that the president in fact committed the crime of bribery.”

Nathaniel Rakich: “Today’s hearing strikes me as having the potential to actually change people’s minds about impeachment. So far, we don’t have a lot of evidence that the hearings have done so.”

“We’ve only seen a few polls conducted after last week’s hearings. The Economist/YouGov found that Americans support the House impeaching Trump by 5 percentage points, which was virtually unchanged from the 6-point lead impeachment held in their pre-hearings poll. And while Morning Consult/Politico did find that net support for impeachment has gone from 8 points to 4 points, an ABC News/Ipsos poll found that, among those who made up their minds about impeachment after last week’s hearings, 60 percent came down on the pro-impeachment side.”

Washington Post: “White House lawyers pressed in recent days to learn from Sondland’s legal team what the ambassador would tell Congress about the president and claims of a ‘quid pro quo’ in his much anticipated testimony today.”

“Sondland’s lawyers declined however to provide the White House with an early peek into the account that this key impeachment witness would give lawmakers about his interactions with the president.”

Washington Post:”A federal judge said she intends to rule no later than the end of the day Monday on whether former White House counsel Donald McGahn must testify under subpoena to Congress, after the House Judiciary Committee asked her to accelerate a decision because it aims to call him after the current round of public impeachment hearings finish in December.”

Newsweek: “Much of the nearly 260 pages of the anonymous official’s tome, A Warning, which hit bookshelves on Tuesday, has been dedicated to sounding the alarm about Trump’s alarming behavior.”

“While the anonymous author, who is described only as a senior official in the Trump administration admits they are not ‘qualified to diagnose the president’s mental acuity,’ they can say that ‘normal people who spend any time with Donald Trump are uncomfortable by what they witness.’”

Writes the official: “He stumbles, slurs, gets confused, is easily irritated, and has trouble synthesizing information, not occasionally but with regularity.”

“Benny Gantz, the chief political rival of Prime Minister Benjamin Netanyahu, said Wednesday that he had failed to form a new government ahead of a looming midnight deadline, propelling a deeply divided Israel into a new, uncharted phase of political chaos and increasing the likelihood of a third election in a year,” the New York Times reports.

“Lt. Col. Alexander S. Vindman is hitting back at the smear campaign against him,” the New York Times reports.

“A lawyer for Colonel Vindman, the National Security Council’s Ukraine expert, sent a warning letter to Fox News on Wednesday seeking a retraction or correction of an October segment hosted by one of the network’s biggest personalities, Laura Ingraham, which baselessly suggested that the colonel, a decorated Iraq war veteran, might be guilty of espionage.”

Rep. Carolyn Maloney (D-NY) will become the first woman to lead the House Oversight Committee, vaulting into a high-stakes role as one of the Democrats’ top voices in the caucus’ impeachment probe, Politico reports.

The New York Democrat was confirmed to the post in a caucus-wide vote, where she defeated Rep. Gerry Connolly (D-VA).