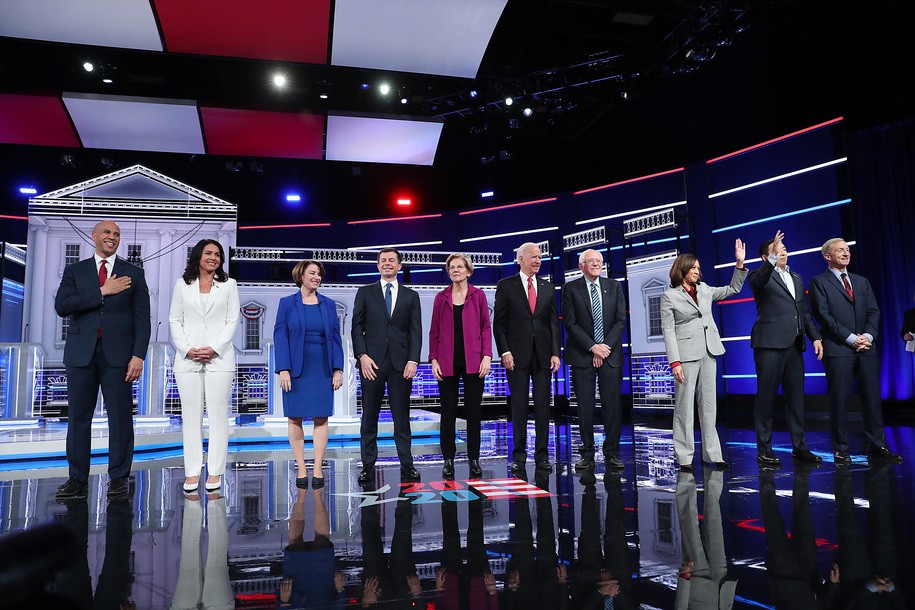 Last’s night debate was more civil, friendly, and therefore, much less consequential, especially after a LONG day of news in the Impeachment Inquiry. The frontrunners really weren’t ganged up on. Pete Buttigieg, the new star and Iowa leader, escaped unscathed. So did Bernie and Warren. Biden had the punching gaffe and the black senator gaffe. He really struggles in debates, and it is why he is not running away with the nomination.

In the end, I have become less and less interested in these debates because, except for one person, Tulsi Gabbard, I like all the candidates. Yes, even Bernie. Gabbard got taken down by Harris, which was glorious. Gabbard, a Republican and Russian plant, should never appear on that debate stage again. Let her retire to her Fox News speaking gig.

Booker and Klobuchar had good nights from what I gather, so maybe this debate will serve as a launching pad for them. The line of the night may have been from Amy Klobuchar:

“Women are held to a higher standard. Otherwise we could play a game called ‘name your favorite women president,’ which we can’t do because it has all been men. … And if you think a woman can’t beat Donald Trump, Nancy Pelosi does it every single day.” — Sen. Amy Klobuchar, during last night’s Democratic debate.

Politico: “Pete Buttigieg came into Wednesday night’s debate bracing for an onslaught that never came. Yes, Amy Klobuchar and Tulsi Gabbard questioned his experience. Cory Booker dinged the young mayor’s resume, pointing out that he’s the ‘other Rhodes scholar mayor on the stage’ and warning voters against picking a Democratic nominee with an ‘inauthentic’ connection to African American voters — a bloc that has largely ignored Buttigieg’s upstart where Buttigieg has failed to gain traction.”

“But Kamala Harris declined a served-on-a-platter chance to hit Buttigieg again over a recent campaign misstep involving a stock photo of black people, instead pivoting to her own case for the Democratic nomination.”

“And Joe Biden, Elizabeth Warren and Bernie Sanders, who remain packed together at the top of recent Iowa and New Hampshire polls alongside Buttigieg, didn’t take him on at all — a testament to the still-unsettled nature of the 2020 primary campaign and concerns about alienating potential voters with negative attacks less than three months before voting starts in Iowa.”

Bad news but with a caveat: A new Marquette Law poll in Wisconsin finds President Trump leading Joe Biden in the important swing state, 47% to 44%. Trump leads Bernie Sanders, 48% to 45%, beats Elizabeth Warren 48% to 43%, and tops Pete Buttigieg 47% to 39%.

The caveat: Harry Enten: “Across the board the sample is far more friendly to Trump than Marquette’s last poll (so caution needed), but combine this with the NYT/Siena polling… and you get the feeling Trump is far, far from a goner in 2020.”

The Intercept: “One of the main tenets of Pete Buttigieg’s plan to address racial inequality if he becomes president is a proposal to increase the number of federal contracting dollars going to women- and minority-owned businesses to 25 percent. But in South Bend, Indiana, where he has been mayor since 2012, less than 3 percent of city business has gone to minority- and women-owned businesses in recent years, according to annual audits conducted by the city.”

“As he moves toward a presidential announcement, New York billionaire Michael Bloomberg is rolling out plans to spend an estimated $15 million to $20 million on a voter registration drive designed to weaken President Trump’s reelection chances in five battleground states,” the AP reports.

Good. Again, this is what he should be doing instead of a vanity campaign.

The Atlantic: “Staffers for the senator’s campaign are exasperated and annoyed… He’s done everything right: established the necessary relationships in key states, racked up more endorsements than any other candidate, performed well in the debates. He carries the message of unity that Democrats say they want… He’s made no big gaffes, had no significant stumbles. His messaging has been consistent. At candidate events, he reliably gives the best speeches to the most thunderous ovations.”

“Maybe it’s that he can come off like he’s trying too hard… Maybe it’s because cynical political reporters can’t avoid laughing off his talk about a ‘conspiracy of love’ … Maybe he’s just too weird a confection of traits … Or maybe he’s being subjected to a kind of second-order racism: it’s not that voters are opposed to putting another black man in the White House; it’s that they’re afraid other voters won’t be willing to put another black man in the White House.”

“Google said it plans to stop allowing highly targeted political ads on its platforms, a move that comes as tech giants are drawing scrutiny for their rules on ads that relate to electoral outcomes or mention federal or state political parties,” the Wall Street Journal reports.

President Trump hosted a previously undisclosed dinner with Facebook CEO Mark Zuckerberg and Facebook board member Peter Thiel at the White House in October, NBC News reports. It is unclear why the meeting was not made public or what Trump, Zuckerberg and Thiel discussed.

Former Gov. Deval Patrick scheduled a presidential campaign event at Morehouse College tonight but it was cancelled after Patrick arrived and learned that only two people showed up, CNN reports.