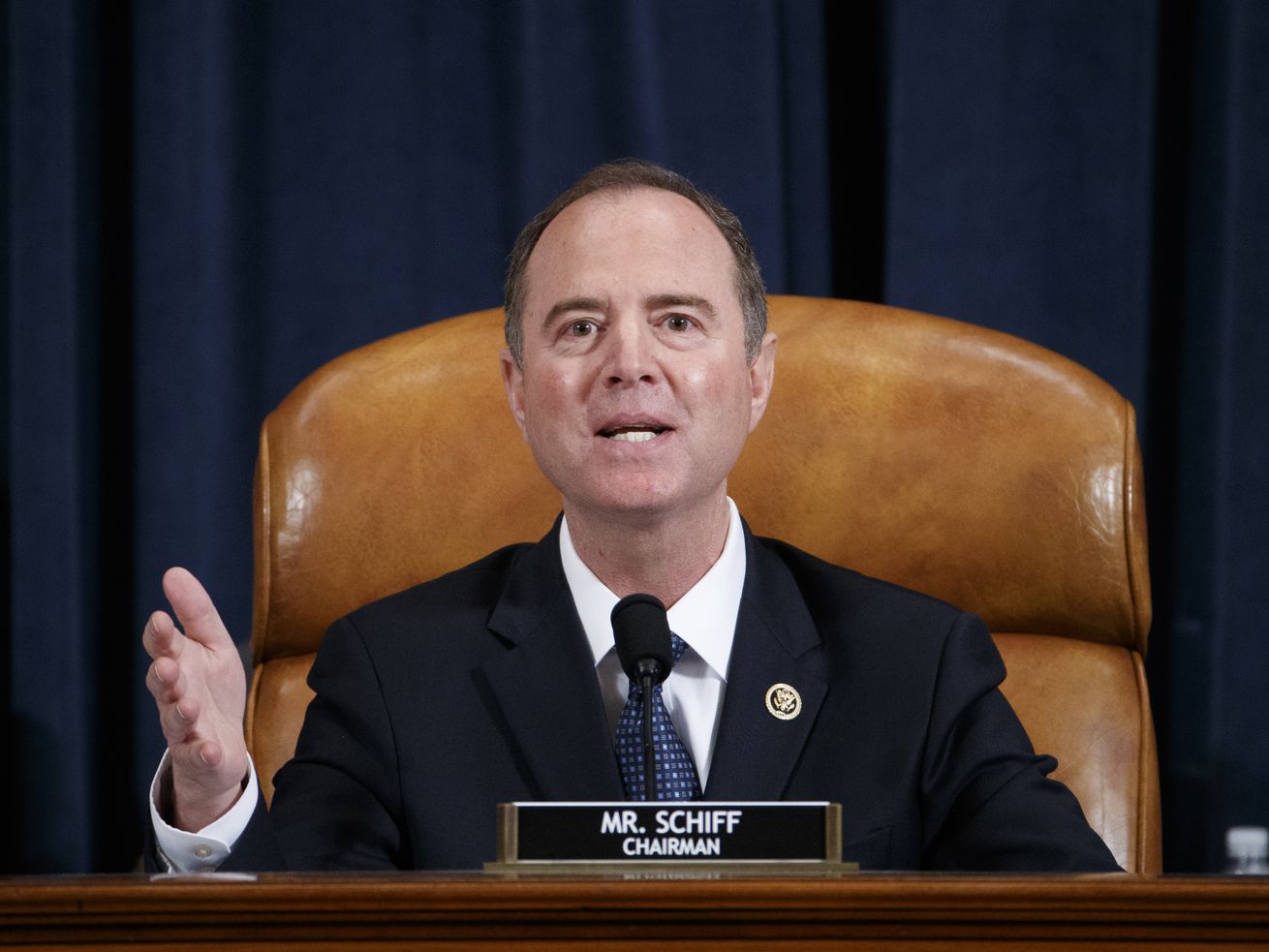 It was a marathon day for testimony in the impeachment inquiry, and we will get to that in a second. But the first thing you are required to watch is Adam Schiff’s closing statement.

Lt. Col. Alexander Vindman, the top Ukraine specialist on the National Security Council, and Jennifer Williams, an adviser to Mike Pence on Russia and Europe, both listened in on Trump’s call with Ukrainian President Volodymyr Zelensky, in which Trump ignored official talking points about fighting corruption to instead “demand” an investigation tied to Joe Biden.

Vindman told the House Intelligence Committee that “What I heard was inappropriate and I reported it […] out of a sense of duty,” because “the connection to investigate a political opponent was inappropriate and improper.” Vindman also testified that he interpreted Trump’s request that Zelensky open investigations as a demand, saying “the power disparity between the two leaders – my impression was that in order to get the White House meeting, President Zelensky would have to deliver these investigations.”

In her opening statement, Williams said she found the call “unusual” because it “involved discussion of what appeared to be a domestic political matter.” Vindman and Williams are the first White House officials to testify in public as part of the impeachment inquiry.

“Dad, I’m sitting here today, in the U.S. Capitol talking to our elected professionals — is proof that you made the right decision 40 years ago to leave the Soviet Union. Do not worry, I will be fine for telling the truth.” — Lt. Col. Alexander Vindman, quoted by the Daily Beast, during his opening testimony before the House Intelligence Committee.

Kurt Volker attempted to reconcile his previous closed-door testimony, which conflicted with subsequent witness testimony, saying “I have learned many things that I did not know at the time of the events in question.” Specifically, Volker said he “did not know of any linkage between the hold on security assistance and Ukraine pursuing investigations” while he was working with Rudy Giuliani and a Zelensky aide to pressure Ukraine into launching an investigation into Burisma, the gas company that employed Hunter Biden. Volker said that “In retrospect, I should have seen that connection differently,” and that he now understands an investigation into Burisma was intended as an investigation into the Bidens.

Volker called the allegation that Biden acted corruptly with Ukraine while he was vice president a “conspiracy theory” that is “self-serving and not credible.” Separately, Fiona Hill, then the senior director for Europe and Russia at the National Security Council, and Vindman, previously testified that John Bolton, then the national security adviser, abruptly ended a July 10 meeting when Gordon Sondland, the ambassador to the European Union, brought up the investigations. Volker never mentioned the exchange in his original testimony, but told lawmakers today that “as I remember,” Sondland made a comment about investigations into Trump’s political rivals, which “all of us thought it was inappropriate.”

Tim Morrison testified that he was “not concerned that anything illegal was discussed” during Trump’s July 25 call with Zelensky, but worried it would cause a political storm if the transcript became public. Morrison, the former senior director for Europe and Ukraine at the National Security Council, told the committee that “I feared at the time of the call on July 25 how its disclosure would play in Washington’s climate.”

He continued: “My fears have been realized.” Morrison also said Sondland told him that “the Ukrainians would have to have the prosecutor general make a statement” about investigations as a “condition” for receiving security aid. When asked if he agreed that pressuring “a foreign government to investigate a domestic political rival [was] inappropriate,” Morrison replied: “It is not what we recommend the president discuss.”

“Federal prosecutors are planning to interview an executive with Ukraine’s state-owned gas company as part of an ongoing probe into the business dealings of Rudy Giuliani and two of his Soviet-born business associates,” the AP reports.

“A lawyer for Andrew Favorov confirmed Tuesday that he is scheduled to meet voluntarily with the U.S. Justice Department. Favorov is the director of the integrated gas division at Naftogaz, the state-owned gas provider in Ukraine.”

“The Navy SEAL at the center of a high-profile war crimes case has been ordered to appear before Navy leaders Wednesday morning, and is expected to be notified that the Navy intends to oust him from the elite commando force,” the New York Times reports.

“The move could put the SEAL commander, Rear Adm. Collin Green, in direct conflict with President Trump, who last week cleared the sailor, Chief Petty Officer Edward Gallagher, of any judicial punishment in the war crimes case. Military leaders opposed that action as well as Mr. Trump’s pardons of two soldiers involved in other murder cases.”

“Several Republican lawmakers were more ‘shaken’ than they publicly let on by the testimony of a US official in Kiev who overheard a phone conversation between the US ambassador to the European Union and President Trump,” CNN reports.

“David Holmes — who will testify publicly as part of the House impeachment inquiry — said in closed-door testimony last week that US Ambassador to the EU Gordon Sondland had told Trump that Ukrainian President Volodymyr Zelensky ‘loves your ass’ and that Ukraine was going to move forward with the investigation Trump had asked Zelensky for a day earlier.”

“According to the GOP congressional source, that testimony led several GOP lawmakers to express frustration that Sondland would place a call to the President in a public restaurant, and are concerned that Holmes’ testimony was the most convincing argument for Trump’s direct involvement in the campaign to pressure Ukraine.”

President Trump’s call to the cell phone of a U.S. ambassador — a call that included a discussion of “investigations” Trump was asking Ukraine to launch into his Democratic rivals — was at risk of being monitored by Russia, a State Department official told House impeachment investigators, Politico reports.

Said David Holmes: “We generally assume that mobile communications in Ukraine are being monitored.”

New York Times: “The specter of last year’s 35-day shutdown drove a slim bipartisan margin on Tuesday, as most lawmakers agreed that a temporary spending bill maintaining current levels of funding for another four weeks was preferable to an encore of the breach last year, which lasted into January.”

“Left unresolved, however, are the dozen must-pass bills that would maintain funding for the remainder of the fiscal year, which began on Oct. 1. Lawmakers on the traditionally bipartisan Appropriations Committees have failed to reach an agreement over funding Mr. Trump’s signature campaign promise to build a wall between the United States and Mexico — the same fraught debate that led to the nation’s longest government shutdown nearly a year ago.”

Without evidence, President Trump claimed that Speaker Nancy Pelosi is using negotiations over a new North America trade deal to try to get votes for impeachment, the Washington Post reports.

Said Trump: “The woman is grossly incompetent. All she wants to do is focus on impeachment, which is just a little pipe dream she’s got, and she can keep playing that game.”

Akerman claimed Sondland has “got no choice here” but to “come clean” about his role and Trump.

He added: “Otherwise he’s gonna wind up like Roger Stone in federal prison, with Roger Stone as his roommate. I mean, he does not want that to happen,”

Washington Post: The contradictions and discrepancies of Gordon Sondland’s testimony.

Playbook: “The president’s ambassador to the EU has already had to amend his testimony once, and subsequent witnesses have testified that Sondland called the president on July 26 from a Kyiv restaurant and discussed ‘investigations.’ Sondland did not mention that in his deposition.”

This is a blatant lie, and Grisham must resign immediately and never be hired by anyone for any job ever again in any field anywhere.

“The White House is facing fresh allegations of dishonesty after press secretary Stephanie Grisham claimed without evidence that aides to former president Barack Obama left behind disparaging messages around the White House on the day President Trump was inaugurated,” the Washington Post reports.

“Grisham then modified her assertions later in the day, changing key parts of her story and saying she viewed the alleged conduct as little more than a harmless prank.”

Politico: “The withdrawal and incursion allowed ISIS to ‘reconstitute capabilities and resources within Syria and strengthen its ability to plan attacks abroad,’ according to the quarterly report from the lead inspector general on the U.S. military campaign against ISIS.”

A Manhattan judge has again denied President Trump’s request to dismiss a defamation lawsuit filed by former Apprentice contestant Summer Zervos against him, clearing the way for the President to be deposed by January 31, CNN reports.

“President Trump’s aides have explored moving some impeachment witnesses on loan to the White House from other agencies, such as Lt. Col. Alexander Vindman, back to their home departments ahead of schedule,” CNN reports.

“As public hearings bring the officials’ allegations to his television screen, Trump is asking anew how witnesses such as Vindman and Ambassador Bill Taylor came to work for him, people familiar with the matter said. He has suggested again they be dismissed, even as advisers warn him firing them could be viewed as retaliation.”

“The impeachment inquiry has created the first rift between President Donald Trump and the Cabinet member who has been his closest ally, Secretary of State Mike Pompeo,” NBC News reports.

“Trump has fumed for weeks that Pompeo is responsible for hiring State Department officials whose congressional testimony threatens to bring down his presidency… The president confronted Pompeo about the officials — and what he believed was a lackluster effort by the secretary of state to block their testimony — during lunch at the White House on Oct. 29.”

“Trump particularly blames Pompeo for tapping Ambassador Bill Taylor in June to be the top U.S. diplomat in Ukraine.”