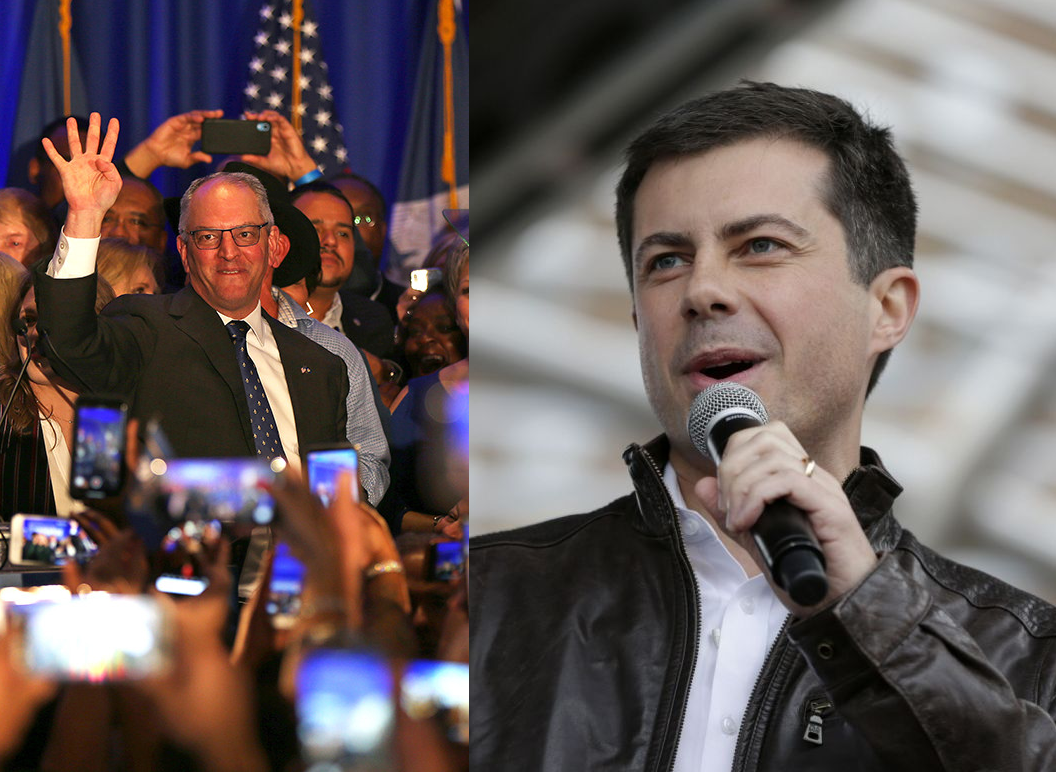 Louisiana’s John Bel Edwards (D) stuns the GOP and wins reelection to a second term as the Deep South’s only Democratic governor, the APreports.

Baton Rouge Advocate: “Rarely have presidents been so involved in a state-level race. Trump visited Louisiana three times to rally Republican and rural voters to head to the polls and ‘fire’ Edwards, calling him ‘a radical.’ Trump told Louisiana voters they could send a message to national Democrats that they stood behind him by voting for Rispone.”

A new Des Moines Register/CNN/Mediacom Iowa Poll finds Pete Buttigieg leading the Democratic field with 25%, followed by Elizabeth Warren at 16%, Joe Biden at 15%, Bernie Sanders at 15% and Amy Klobuchar at 6%.

Michael Bloomberg’s final decision on a presidential run is “days, not weeks” away, a person familiar with his thinking tells Axios — with an announcement expected before Thanksgiving.

Dan Balz: “Sen. Elizabeth Warren (D-MA) has been mostly sure-footed in her campaign for the Democratic presidential nomination. One exception is health care. On Friday, she issued another proposal to go along with her support for Medicare-for-all, a step that appeared designed to put her into a safer place politically.”

“Warren’s progression on health care through the course of the campaign has taken her from a position of flexibility to one of seeming inflexibility — at least until Friday. Over a period of months, she walked herself into a place that many Democrats feared could make her chances of winning a general election more, not less, difficult. Whether Friday’s turn alleviates those worries remains to be seen.”

Margot Sanger-Katz: “Elizabeth Warren, the Massachusetts senator, has allied herself with the “Medicare for all” wing of the party, saying she would propose a single-payer system. But on Friday, she released a second plan, a sort of steppingstone along the way that would create a more optional government program. Her transition plan is engineered to pass with only a majority of Senate votes, instead of the 60 usually needed to overcome a filibuster.”

“But it also includes a long and detailed list of the things she would do if she couldn’t get Congress on board. That section of the report, which is likely to get less attention and draw less criticism than the rest, actually tells us a lot about what health care policy would probably be like in a Warren administration.”

“The decisions by Joe Biden and Elizabeth Warren to skip a weekend gathering of thousands of fervent California Democrats less than three months before voting begins have frustrated and puzzled some party leaders,” the AP reports.

“But they have offered a chance for their rivals to capitalize on the absence of two front-runners at the gathering that serves as an unofficial kickoff of the final sprint to California’s March 3 primary, which offers the biggest delegate haul of any primary or caucus.”

Sen. Kamala Harris is getting the presidential endorsement of the United Farm Workers, the San Francisco Chronicle reports.

“The major endorsement is timed with the California Democratic Party Endorsing Convention in Long Beach, and comes as a shot in the arm as the Democrat’s campaign has struggled in recent months.”