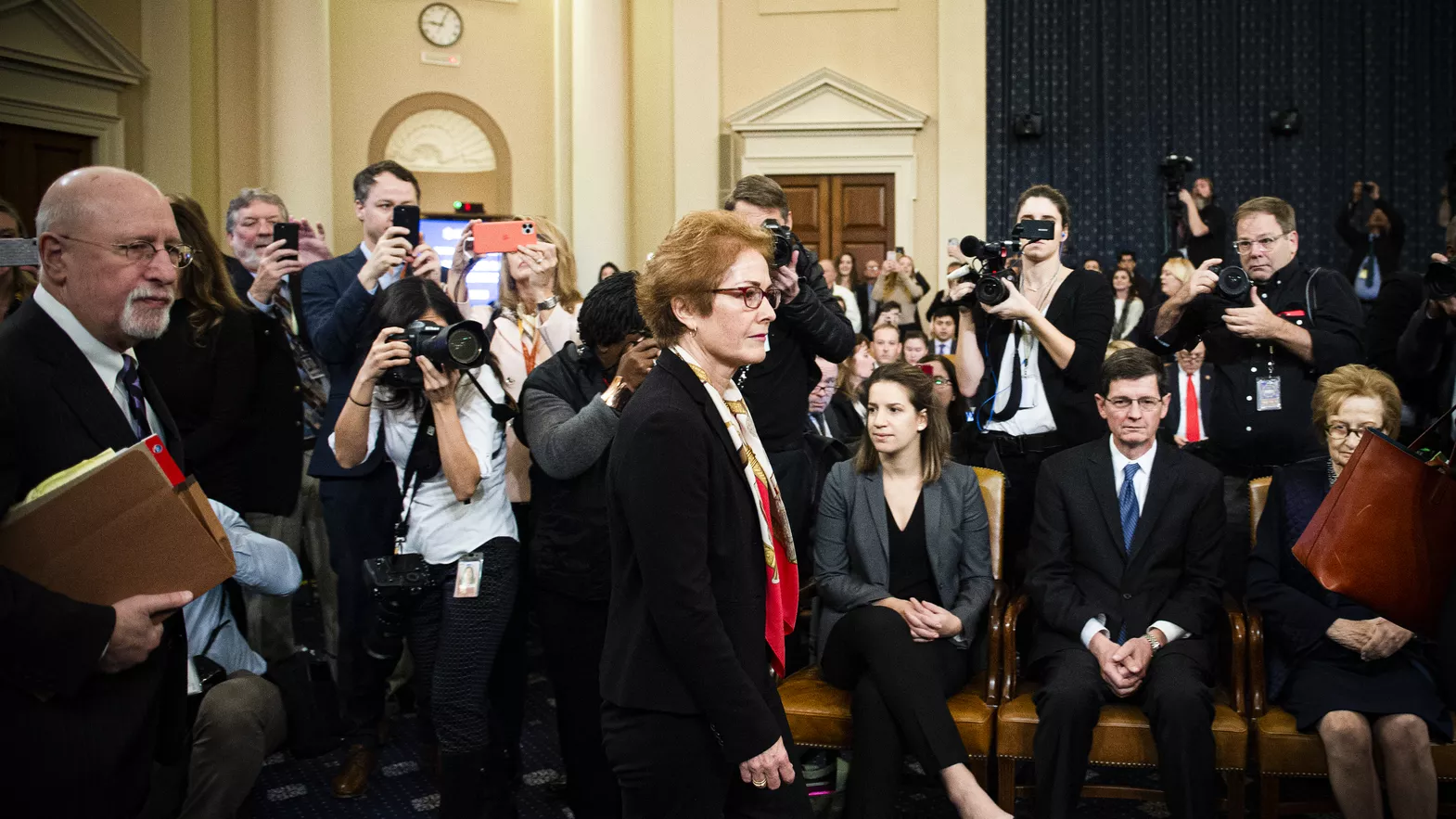 Marie Yovanovitch, the former top U.S. diplomat to Ukraine, described a “crisis” at the State Department during her public impeachment testimony on Friday, voicing concern that the agency’s failure to protect foreign service officials who faced attacks for their work overseas put U.S. interests at risk, The Hill reports.

Yovanovitch described a smear campaign led by Rudy Giuliani, corrupt Ukrainian officials and disreputable media figures who successfully facilitated her removal as the U.S. ambassador to Ukraine in May.

Republican lawmakers had one goal during the House Intelligence Committee’s hearing with former U.S. Ambassador to Ukraine Marie Yovanovitch: Do not attack her.

Democrats telegraphed their strategy was to portray Yovanovitch as, the New York Times reports, “a sympathetic victim of bullying by Rudy Giuliani and the president, whose decision to pull her from Ukraine helped set the stage for the campaign to pressure that country’s president… Republicans did not want to attack Yovanovitch personally, just to portray her as a distraction from the main events.”

It’s clear that attacking Yovanovitch would just help Democrats in their efforts to impeach Trump. And then Trump tweeted. In a single tweet, Trump completely undermined the GOP’s strategy. And he committed a crime, and added another Article of Impeachment to the list. Several Republicans on the House Intelligence Committee dodged questions about President Trump’s tweet smearing U.S. Ambassador to Ukraine Marie Yovanovitch, Politico reports.

After reading President Trump’s tweet attacking Ambassador Maria Yovanovitch as she was testifying, House Intelligence Committee chairman Adam Schiff asked the diplomat whether she thought the tweet was meant to intimidate her. Said Yovanovitch: “I can’t speak to what the president is trying to do, but I think the effect is intimidating.” Schiff responded: “Some of us here take witness intimidation very seriously.”

“Rep. Mike Turner (R-OH) refused to answer questions about the tweets as he ducked on to the House floor, while Rep. John Ratcliffe (R-TX) quickly whipped out his cell phone and began talking into it, even though his home screen was visible and there was no call in progress.”

Yovanovitch even confirmed in real time that she felt intimidated. The tweet made clear that Trump did single Yovanovitch out — which is exactly what Democrats hoped to prove with today’s hearing.

Said Baier: “Adding, essentially, an article of impeachment real time as this hearing is going on.” House Intelligence Committee Chairman seemed to agree, telling ABC News: “What we saw today: witness intimidation in real time by the president of the United States.”

“A longtime career employee at the White House Office of Management and Budget is expected to break ranks and testify Saturday in the House Democrats’ impeachment inquiry, potentially filling in important details on the hold-up of military aid to Ukraine,” the Washington Post reports.

“Mark Sandy would be the first OMB employee to testify in the inquiry, after OMB acting director Russell T. Vought and two other political appointees at the agency defied congressional subpoenas to appear. The White House has called the impeachment inquiry unconstitutional and ordered administration officials not to participate.”

“For the second day in a row, President Trump asked the Supreme Court on Friday to protect his personal and business financial records from disclosure, this time to a congressional committee,” the Washington Post reports.

“US Ambassador to the European Union Gordon Sondland told President Donald Trump that Ukrainian President Volodymyr Zelensky ‘loves your ass’ and that Ukraine was going to move forward with the investigation Trump had asked Zelensky for a day earlier,” CNN reports.

“Federal prosecutors in New York are investigating whether Rudy Giuliani stood to personally profit from a Ukrainian natural-gas business pushed by two associates who also aided his efforts there to launch investigations that could benefit President Trump,” the Wall Street Journal reports.

Giuliani is also under investigation for potential campaign finance violations and other potential charges, Bloomberg News reported Thursday, citing three unnamed U.S. officials. Giuliani is also being investigated for a potential violation of the foreign agent registration law, Bloomberg News reported, as part of the ongoing probe into his financial dealings. Charges reportedly could also include bribery of foreign officials or conspiracy.

“Roger Stone, a former aide and longtime friend of President Trump, was found guilty on Friday of obstructing a congressional investigation into Russia’s interference in the 2016 election in what prosecutors said was an effort to protect Mr. Trump,” the New York Times reports.

“Stone was charged with lying to the House Intelligence Committee, trying to block the testimony of another potential witness and concealing reams of evidence from investigators.”

NBC News: “He is the sixth Trump aide or adviser to be convicted of charges brought as part of Mueller’s probe.”

“Stone’s sentencing was set for Feb. 6 and he could face up to 20 years in prison.”

“President Trump has so far failed to follow through on his vow to secure tougher gun laws in the wake of this summer’s mass shootings that killed dozens. The latest rationale from Republicans: The House’s impeachment inquiry makes it impossible,” the Washington Post reports.

Said Attorney General William Barr: “Unfortunately, our discussions on the legislative aspects of this have been sidetracked because of the impeachment process on the Hill, and so we are going forward with all the operational steps that we can take that do not require legislative action. Right now it does not appear that things in Washington are amenable to those kinds of negotiations and compromises.”

Jonathan Chait: “From the perspective of President Trump’s frustrated critics, the attempts to subject him to legal accountability have amounted to a long string of failures. Robert Mueller failed to produce a clear indictment of his dealings with Russia, and impeachment appears headed toward a partisan stalemate that will leave him in office.”

“But as Trump’s constant boil of rage attests, those efforts have hardly failed. The legal ring surrounding him is collectively producing a historic indictment of his endemic corruption and criminality.”

Just before the second public impeachment hearing was set to begin, the White House released a rough transcript of President Trump’s phone call with Ukraine’s president. The call was rather unremarkable, with Trump simply offering his congratulations to the newly elected president.

“The release of the transcript of President Trump’s first call in April with Ukrainain president-elect Volodomyr Zelensky was meant to bolster the case that Trump had nothing but good intentions in his dealings with Ukraine—but it also showed a White House summary of the same call released to the public shortly after it occurred was largely fabricated,” the Daily Beast reports.

Said Pelosi: “Because he knows — well, he made a mistake and he knows her strength. And he was trying to undermine it.”

She added: “I think part of it is his own insecurity as an imposter. I think he knows full well that he’s in that office way over his head. And so he has to diminish everyone else.”

“A federal judge excoriated Justice Department officials Thursday for their handling of potential criminal charges against former Deputy FBI Director Andrew McCabe, saying the continued uncertainty over the prosecution was unfair to McCabe and the public,” Politico reports.

Washington Post: “One of the men, Lev Parnas, has described to associates that he and his business partner, Igor Fruman, told Trump at the dinner that they thought the U.S. ambassador to Ukraine was unfriendly to the president and his interests.”

“According to Parnas, the president reacted strongly to the news: Trump immediately suggested that then-Ambassador Marie Yovanovitch, who had been in the Foreign Service for 32 years and served under Democratic and Republican presidents, should be fired, people familiar with his account said.”

“The Justice Department inspector general’s office has told witnesses who are set to review draft sections of its long-awaited report on the FBI investigation of President Trump’s 2016 campaign that they will not be allowed to submit written feedback — one in a series of unusual restrictions that some fear could make the final document less accurate,” the Washington Post reports.

“As is the case in most inspector general probes, witnesses are being invited to review draft sections of the report and offer comments and corrections, the people said. But — unlike most cases — they are being told those comments must be conveyed only verbally.”