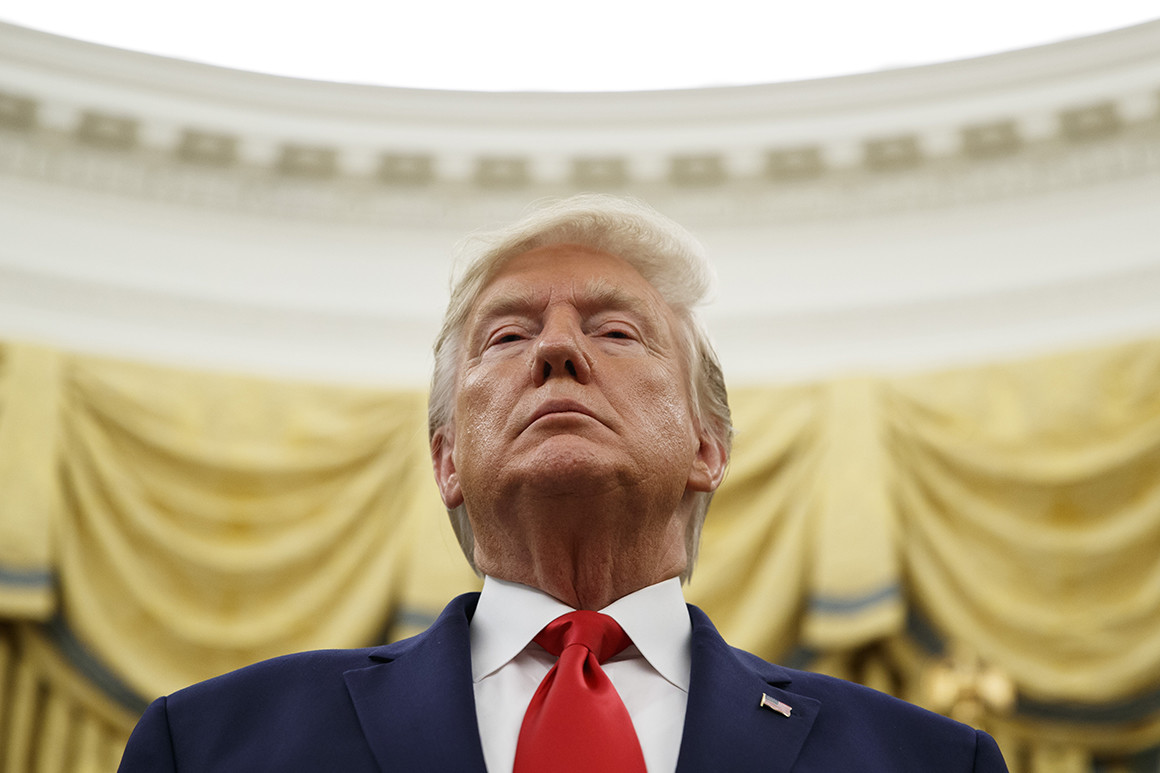 “A second U.S. Embassy staffer in Kyiv overheard a cellphone call between President Trump and his ambassador to the European Union discussing a need for Ukrainian officials to pursue ‘investigations,’” the AP reports.

“The July 26 call between Trump and Gordon Sondland was first described during testimony Wednesday by William Taylor, the acting U.S. ambassador to Ukraine. Taylor said one of his staffers overhead the call while Sondland was in a Kyiv restaurant the day after Trump’s July 25 phone call with Ukrainian President Volodymyr Zelenskiy that triggered the House impeachment inquiry.”

“The second diplomatic staffer also at the table was Suriya Jayanti, a foreign service officer based in Kyiv.”

Playbook: “The Gordon Sondland hearing — which is set for next Wednesday — now carries added weight. The political donor was the subject of so much of the questioning Wednesday afternoon. According to testimony, he spoke to the president repeatedly about what are being described as politically motivated investigations. Sondland even spoke with the president on his cellphone from a restaurant in Kyiv — he was surely spied on, experts say — and had the volume up loud enough that an aide to Taylor heard the phone call, during which the president quizzed Sondland about the Biden probes. Both sides tell us they will be sharpening their knives for Sondland, though one Republican cautions that he’s flaky and underwhelming, and will be good for neither party.”

“U.S. Ambassador to the European Union Gordon Sondland’s cell phone call to President Trump from a restaurant in Ukraine this summer appears to be a shocking security breach that raises significant counterintelligence concerns,” CNN reports.

Several former officials said “there is a high probability that intelligence agencies from numerous foreign countries, including Russia, were listening in on the conversation.”

Also, this is interesting: just before departing for a campaign rally in Louisiana, President Trump was seen in the Oval Office having what NBC News called an “animated conversation” with Attorney General William Barr.

“President Trump asked the Supreme Court on Thursday to stop a prosecutor’s investigation of his personal finances, a bold assertion of presidential power that seeks a landmark decision from the nation’s highest court,” the Washington Post reports.

“The filing by the president’s private lawyers represents a historical moment that tests the court’s independence and highlights the Constitution’s separation-of-powers design. It also marks a new phase in the investigations that have dogged Trump throughout his presidency and have culminated in an impeachment inquiry.”

“The justices are not required to review the lower court’s decision. But the chances that the high court will get involved increased Wednesday, when a separate appeals court in a separate case concluded Congress has a right to those same tax records.”

New York Times: “The case, the first concerning Mr. Trump’s personal conduct and business dealings to reach the court, could yield a major ruling on the scope of presidential immunity from criminal investigations.”

Josh Marshall: ” I have wondered, many of you have asked me, just what the rush of activity was to get Vladimir Zelensky to kick off and publicly announce these investigations. After all, during the key events the US election was well over a year away. The answer comes down to the April election in Ukraine. Trump and Rudy had a deal in place or thought they had a deal in place with the crew around the old President Poroshenko. When Zelensky beat him in a landslide it set off a frenzied, sloppy and ultimate futile effort to get Zelensky to honor the deal.”

Speaker Nancy Pelosi appeared to question President Trump’s intelligence at a news conference: “If the president has something that is exculpatory — Mr. President, that means you have anything that shows your innocence — then he should make that known. So far we haven’t see that.”

In a telephone interview with The Guardian, in response to a question about whether he was nervous that President Trump might “throw him under a bus” in the impeachment crisis, Giuliani said with a slight laugh: “I’m not, but I do have very, very good insurance, so if he does, all my hospital bills will be paid.”

Giuliani’s lawyer, Mark Costello, who was also on the call then interjected: “He’s joking.”

Josh Marshall: “We know the “deliverable” (a Biden investigation announcement) from President Zelensky never got delivered and that has become a key part of the Republican defense. No harm, no foul. But as Matt Shuham explains here Zelensky was no more than 24 hours from recording the interview tarring the Biden’s for “Ukraine corruption” and possibly as little as three or four hours. And what killed it was the chain of events triggered by the whistleblower complaint, the notification to Congress and Trump relenting on releasing the aid since they had in essence gotten caught.”

“The Senate voted Thursday to make Steven Menashi a lifetime federal judge, despite his inflammatory writings about women’s rights and diversity, his refusal to answer senators’ questions and his role in devising an illegal Education Department effort to deny debt relief to students cheated by for-profit colleges,” the HuffPost reports.

“Democrats questioned his qualifications ― he has never tried a case, made oral arguments in court or conducted a deposition ― as well as his temperament.”

“Every Democrat present voted against confirming Menashi… Every Republican present but one, Sen. Susan Collins, voted to confirm him.”

Rep. Steve King (R-IA) posted photos of the son of left-wing billionaire George Soros on Thursday, absurdly accusing him of being the White House whistleblower, Mediaite reports. Alexander Soros is not the whistleblower. He does not work at the CIA, or in government.

“The Trump administration is preparing court filings to begin taking over private land to build its long-promised border wall as early as this week — without confirming how much it will pay landowners first,” NBC News reports.

WKRC: “The Ohio House on Wednesday passed the ‘Student Religious Liberties Act.’ Under the law, students can’t be penalized if their work is scientifically wrong as long as the reasoning is because of their religious beliefs.”

“Every Republican in the House supported the bill. It now moves to the Republican-controlled Senate.”

“Rudy Giuliani is being investigated by federal prosecutors for possible campaign finance violations and a failure to register as a foreign agent as part of an active investigation into his financial dealings,” Bloomberg reports.

“The probe of Giuliani, which one official said could also include possible charges on violating laws against bribing foreign officials or conspiracy, presents a serious threat to Trump’s presidency from a man that former national security adviser John Bolton has called a ‘hand grenade.’”

“In its effort to sell off the lease to the Trump International Hotel in Washington, the Trump Organization has put together a glossy investor brochure complete with pictures showcasing the hotel’s grandiose architecture, its central location and its spa’s Himalayan salt chamber,” CNN reports.

“The hotel’s biggest selling point though, according to a copy of the brochure… is the one thing that the Trump family insists it didn’t take advantage of: profiting off foreign governments.”

“The Trump Organization insists that its refusal to solicit foreign business has cost it more than $9 million. According to the brochure, those ‘sacrifices’ include turning away 17,100 room nights in 2019, resulting in $5.3 million in lost room revenue and $3.9 million in lost food and beverage revenue.”

President Trump proposed designating all migrants entering the US without permission as “enemy combatants” and shipping them to Guantánamo Bay to be detained alongside hardened terrorism suspects, according to a new book written by an anonymous author, The Guardian reports.

New York Times editorial: “And those Americans who tuned in also learned that the Republicans on the House Intelligence Committee have set themselves a degrading task. Rather than engage the facts about Mr. Trump’s Ukrainian escapade, they are twisting them and eliding them and inventing new ones they’d prefer. They spent most of Wednesday stuffing straw men and then ostentatiously knocking them down.”

Jonathan Swan: “An Oval Office meeting yesterday with Turkey’s President Recep Tayyip Erdoğan took a dark turn when Erdoğan pulled out his iPad and made the group watch a propaganda video that depicted Kurds as terrorists, according to three sources familiar with the meeting.”

“The meeting hosted by President Trump included five Republican U.S. senators who’ve been among the most vocal critics of Turkey’s recent invasion of Syria and attacks on the U.S.’s Kurdish allies in the fight against ISIS.”

“Erdoğan apparently thought he could sway these senators by forcing them to watch a clunky propaganda film.”

“At least eight former White House, presidential transition and campaign officials for President Donald Trump were hired as outside contractors to the federal health department at the cost of hundreds of thousands of dollars per year,” Politico reports.

“They were among at least 40 consultants who worked on a one-year, $2.25 million contract directed by Centers for Medicare and Medicaid Services Administrator Seema Verma. The contractors were hired to burnish Verma’s personal brand and provide ‘strategic communications’ support.”