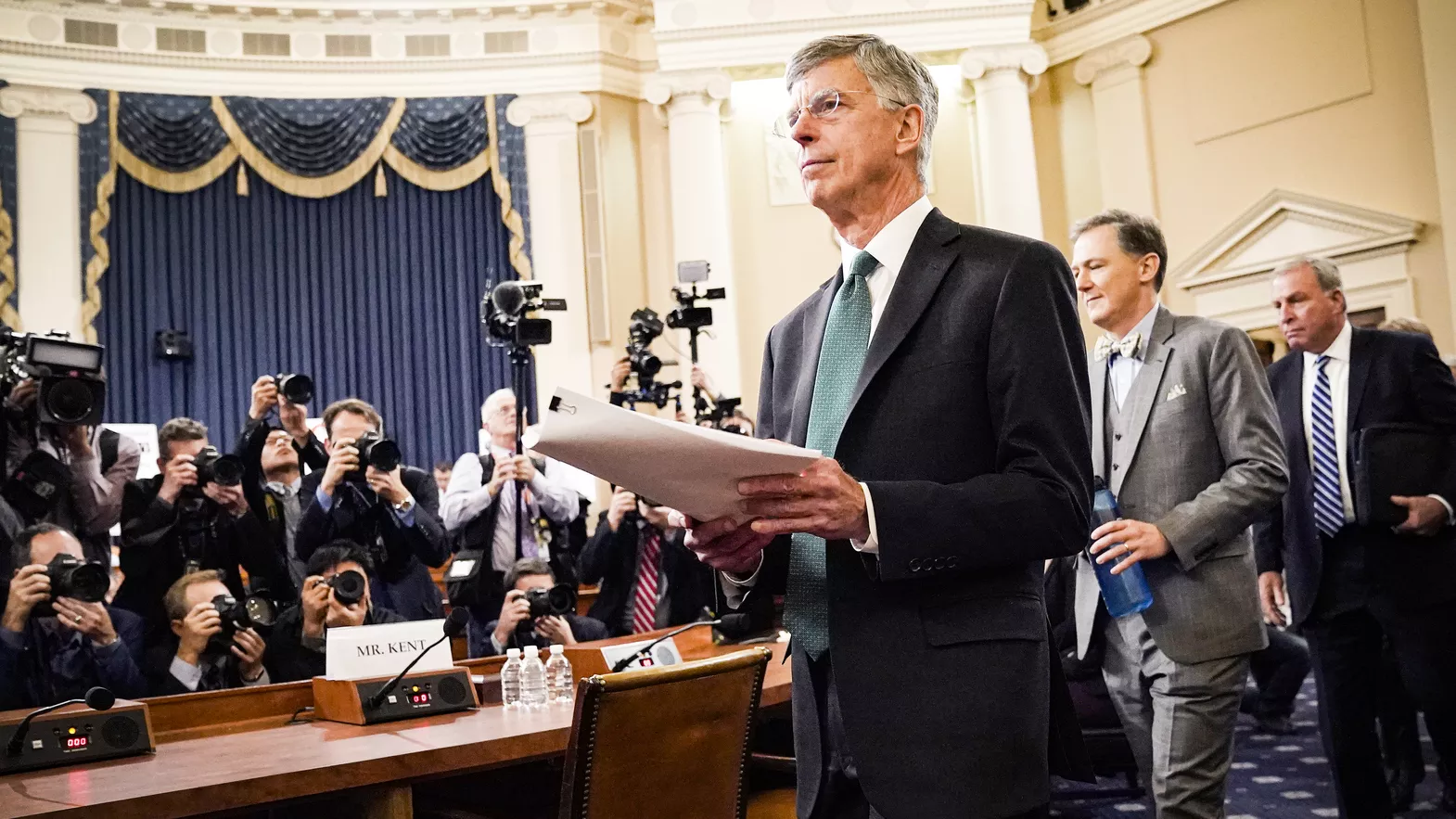 The White House and Republicans tried to portray the hearing as a “boring” and a “waste of time,” however the news headlines are quite different:

Toward the end of his opening statement in the first public impeachment hearing Wednesday, diplomat Bill Taylor dropped a bombshell. Last week, Taylor testified, a member of his staff told him of a previously unknown phone call involving President Donald Trump — one that points to further personal involvement by the president in pressuring Ukraine to investigate the Bidens.

This call took place on July 26, the day after Trump’s now-infamous phone call with Ukrainian President Volodymyr Zelensky. Taylor’s staff member told him that Ambassador to the EU Gordon Sondland had called Trump on the phone from a restaurant; the staffer was present for that call. During the call, the staffer heard Trump ask Sondland about “the investigations,” and Sondland replied that the Ukrainians were ready to move forward.

President Trump said he knows nothing about an alleged July 26 phone call with EU Ambassador Gordon Sondland in which he is reported to have asked about the status of Ukrainian investigations he sought into the Bidens and the 2016 election, Axios reports.

Said Trump: “I know nothing about that. First time I’ve heard it. The one thing I’ve seen that Sondland said is that he did speak with me with for a brief moment and I said “no quid pro quo under any circumstances.” And that’s true. But I’ve never heard this. In any event, it is more secondhand information, but I’ve never heard it.”

Said McConnell: “The rules of impeachment are very clear when it comes to the trial. My own view is that we should give people an opportunity to put the case on, the House will have presenters, the president will no doubt be represented by lawyers as well.”

Mark Sandy, director of national security programs at OMB, is listed as a witness before the House impeachment inquiry on Saturday at 10 a.m., Axios reports. Sandy was initially scheduled to appear before the committees on Friday, Nov. 8 but did not show. It was not immediately clear why Sandy was put back on the schedule.

“The hearings — scheduled for next Tuesday, Wednesday and Thursday — will feature current and former senior officials from across the National Security Council, the State Department and the Pentagon. All of the scheduled witnesses have already been deposed behind closed doors, and several provided explosive evidence that could be featured in articles of impeachment against President Donald Trump.”

“The Justice Department suggested in a filing Wednesday that it had no immediate plans to prosecute former FBI Deputy Director Andrew McCabe, saying it would no longer try to keep documents related to Mr. McCabe from being publicly released because of an ongoing enforcement proceeding,” the Wall Street Journal reports.

“The possibility of Turkey, a NATO ally, acquiring more military equipment from Putin adds a new dimension to the controversy around Trump’s decision to give Erdogan the prestigious platform of a White House meeting.”

Fine. Expel Turkey from NATO and sanction them into oblivion. Seize all Turkish assets everywhere.

“Two people in China were diagnosed with plague, setting off a panic on Tuesday about the potential spread of the highly infectious and fatal disease and prompting China’s government to warn citizens to take precautions to protect themselves,” the New York Times reports.

“Fears are mounting in China over a possible outbreak of the disease, once known as the Black Death, which killed tens of millions of people in medieval Europe, and spread through Asia and Africa.”

John Harris: “The conventional appraisal of Trump’s prospects—the House will likely convict, the Senate will likely acquit and Trump will claim vindication—might well be true. But this glosses over a larger point: On the current trajectory, Republicans are engaging in a battle with their own long-term costs that they will be paying for the next generation.”

“Based on Clinton’s precedent, those costs will be paid against Trump’s agenda—things he wants to do but won’t achieve because of the distorting effects of impeachment on his political options and room for maneuver.”

“President Trump has been threatening for weeks to fire acting chief of staff Mick Mulvaney, but senior advisers have counseled him to hold off on such a drastic step amid a high-stakes impeachment probe, according to three people familiar with the discussions,” the Washington Postreports.

“Senior advisers have cautioned Trump that removing Mulvaney at such a sensitive time could be perilous, the people said — both because Mulvaney played an integral role in the decision to freeze the aid, and because of the disruption that would be caused by replacing one of Trump’s most senior aides.”

“Congress can seek eight years of President Trump’s tax records, according to a federal appeals court order Wednesday that moves the separation-of-powers conflict one step closer to the Supreme Court,” the Washington Post reports.

“Trump’s lawyers have said they are prepared to ask the Supreme Court to intervene in this case and in several other legal battles between the president and Congress.”

“President Trump’s political appointees inappropriately retaliated against a career civil servant at the State Department in part because of her ethnic background, her perceived political views, and the fact that she was in government during prior administrations, a federal watchdog says,” Politico reports.

“The report has been in the works for more than a year. It covers five cases, and overall its findings are mixed, in part because the inspector general says he was ‘unable to obtain essential information from key decision-makers.’”