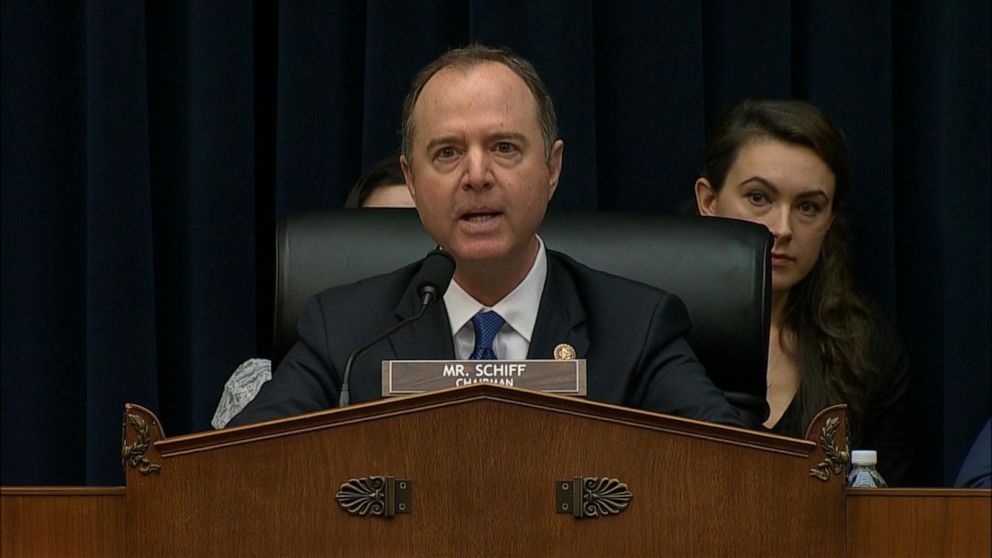 Said Schiff: “Bribery, first of all, as the founders understood bribery, it was not as we understand it in law today. It was much broader. It connoted the breach of the public trust in a way where you’re offering official acts for some personal or political reason, not in the nation’s interest.”

He added that to prove bribery you have to show that the president was “soliciting something of value,” which Schiff thinks multiple witnesses before his committee have testified to in private.

“The Supreme Court’s conservative majority appeared ready to side with the Trump administration in its efforts to shut down a program protecting about 700,000 young immigrants known as Dreamers,” the New York Times reports.

“The court’s liberal justices probed the administration’s justifications for ending the program, expressing skepticism about its rationales for doing so. But other justices indicated that they would not second-guess the administration’s reasoning and, in any event, considered its explanations sufficient.”

President Trump’s economic advisers are exploring whether the president should campaign for reelection proposing a 15% tax rate for the American middle class, with some seeing the idea as a simple way of selling Republicans’ economic agenda as not merely beneficial to the rich, the Washington Post reports.

“The president has said he does not understand why Mr. Atkinson shared the complaint… He has said he believes Mr. Atkinson, whom he appointed in 2017, has been disloyal.”

MSNBC analyst Malcolm Nance claimed that President Trump is a Russian asset who was compromised “as early as 1977” via his first marriage to Czech-born Ivana Trump, the Daily Beast reports.

Nance, a retired naval intelligence operator, went on to boast that he saw early in Trump’s presidential campaign that the U.S. was under attack by a “wide-ranging information warfare attack” by Russia that was designed to make Trump president, adding that he saw it “about a year before anyone would really understand that.”

“I disagree with her ideologically, but I think Nancy Pelosi is a master at political warfare. I think, strategically, what she has done from their perspective is actually quite brilliant.” — Steve Bannon, in an interview with CBS News.

“Acting White House Chief of Staff Mick Mulvaney reversed course, dropping plans to file a lawsuit asking a federal court to decide whether he is required to testify before Congress as part of a Democratic-led impeachment inquiry,” the Wall Street Journal reports.

“Instead, Mr. Mulvaney said he would obey a White House instruction to refuse to cooperate with the House of Representatives.”

New York Times: “Despite his own tenuous job status, Mr. Mulvaney has privately told associates in recent days that there is no easy way for Mr. Trump to fire him in the midst of the impeachment fight, the implication being that he knows too much about the president’s pressure campaign to force Ukraine to provide incriminating information about Democrats.”

“The emails, which Miller sent to the conservative website Breitbart Newsin 2015 and 2016, showcase the extremist, anti-immigrant ideology that undergirds the policies he has helped create as an architect of Donald Trump’s presidency.”

Gates said Stone was telling the campaign about WikiLeaks’ plans as early as April 2016, months before the DNC had announced it was hacked.

Washington Post: “Gates testified that in his campaign role he was asked to keep apprised of the group’s plans and was told by then-campaign chairman Paul Manafort that Trump himself would be kept updated about the disclosures.”

President Trump has had at least 10 encounters with Lev Parnas and Igor Fruman, the indicted associates of Rudy Giuliani the President has adamantly claimed not to know, CNN reports.

“An NBC News investigation found that Mina Chang, the deputy assistant secretary in the State Department’s Bureau of Conflict and Stability Operations, has inflated her educational achievements — like claiming, falsely, to be a Harvard grad — and exaggerated the scope of her nonprofit’s work.”

She even “created a fake Time magazine cover with her face on it — raising questions about her qualifications to hold a top position at the State Department.”

Juleanna Glover: “By most everyone’s judgment, the Senate will not vote to remove President Donald Trump from office if the House impeaches him. But what if senators could vote on impeachment by secret ballot? If they didn’t have to face backlash from constituents or the media or the president himself, who knows how many Republican senators would vote to remove?”

“A secret impeachment ballot might sound crazy, but it’s actually quite possible. In fact, it would take only three senators to allow for that possibility.”

“Bolton said he believes there is a personal or business relationship dictating Trump’s position on Turkey because none of his advisers are aligned with him on the issue.”

“Bolton also questioned the merits of Trump applying his business acumen to foreign policy, saying such issues can’t be approached like the win-or-lose edict that drives real estate deals: When one doesn’t work, you move on to the next.”

“Behind President Trump’s accommodating attitude toward Turkey is an unusual back channel: a trio of sons-in-law who married into power and now play key roles in connecting Ankara with Washington,” the New York Times reports.

“One, Turkey’s finance minister, is the son-in-law of its strongman president and oversees his country’s relationship with the United States.”

“Another is the son-in-law of a Turkish tycoon and became a business partner to the Trump Organization. Now he advocates for Turkey with the Trump administration.”

“And the third is Jared Kushner, who as the son-in-law of and senior adviser to Mr. Trump has a vague if expansive foreign policy portfolio.”

“Donald Trump’s company is to pay the Scottish Government £225,000 to cover its legal bills after the US president’s firm was defeated in a long-running and acrimonious court battle over a windfarm development near his inaugural Scottish golf resort,” The Scotsman reports.

Republicans on the three House committees conducting the Trump-Ukraine investigation have settled on “four key pieces of evidence” that they claim will undermine Democrats’ arguments for why the president should be impeached, Axios reports.

From the GOP memo to committee members:

“The Supreme Court said Tuesday a survivor and relatives of victims of the Sandy Hook Elementary School shooting can pursue their lawsuit against the maker of the rifle used to kill 26 people,” the AP reports.

“The justices rejected an appeal from Remington Arms that argued it should be shielded by a 2005 federal law preventing most lawsuits against firearms manufacturers when their products are used in crimes.”

“The existence of the military surveillance videos, which hasn’t been previously disclosed, provided what some of the U.S. officials saw as firsthand evidence of apparent war crimes by forces backed by Turkey, a NATO ally. Others said the videos were inconclusive.”