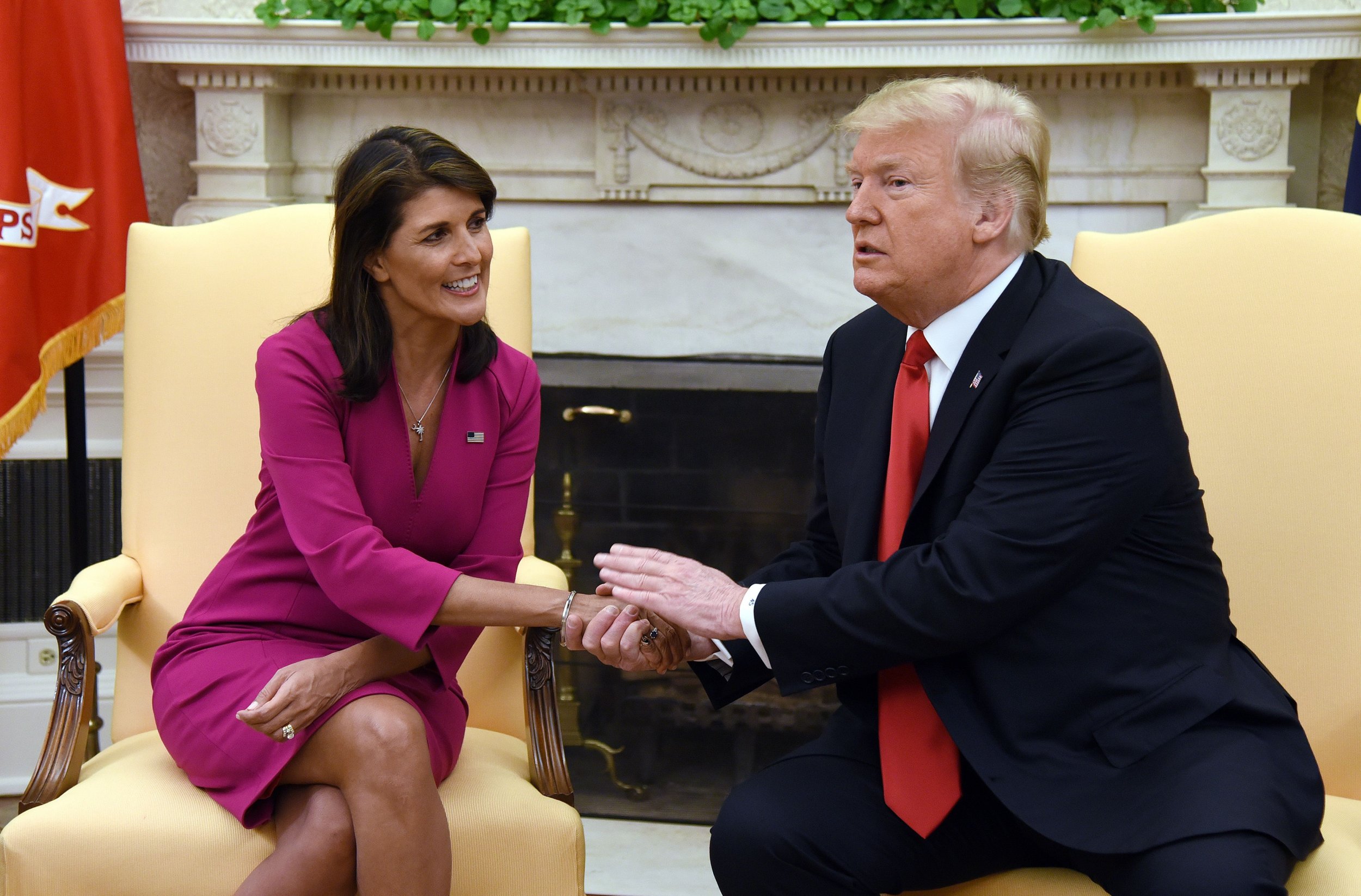 “Two of President Trump’s senior advisers undermined and ignored him in what they claimed was an effort to ‘save the country,’ former United Nations ambassador Nikki Haley claims in a new memoir,” the Washington Post reports.

“Former Secretary of State Rex Tillerson and former White House Chief of Staff John Kelly sought to recruit her to work around and subvert Trump, but she refused, Haley writes in a new book, With All Due Respect, which also describes Tillerson as ‘exhausting’ and imperious and Kelly as suspicious of her access to Trump.”

Writes Haley: “Kelly and Tillerson confided in me that when they resisted the president, they weren’t being insubordinate, they were trying to save the country. It was their decisions, not the president’s, that were in the best interests of America, they said. The president didn’t know what he was doing.”

I am not sure what Haley is doing. By serving in the Trump Administration but resigning early enough to perhaps not be too stained and forever damaged by association with him, she had established herself as perhaps the most viable 2024 or even 2020 GOP Presidential candidate. But now by hitching her star to Trump, she will and has already erased whatever goodwill and integrity she had left.

While meeting with President Trump, the parents of a British teenager who was killed in a traffic collision with the wife of a U.S. diplomat were offered money from the Treasury by the president, which they refused, according to The Guardian. More corruption. All these poor parents want is for an American official who killed their daughter in a traffic accident to be extradited to the UK per our treaty with the UK. But Trump always seeks the mafia style corrupt alternative.

President Trump tweeted or retweeted 82 times on Saturday while flying to and from a collegiate football game in Alabama, Axios reports.

“Many of the president’s tweets were fighting back against the House’s impeachment inquiry into allegations that he withheld congressionally approved military aid to pressure Ukraine to investigate his political opponents. The House will hold its first public impeachment hearings this week.”

“You make your mind up about the phone call. I made my mind up. There’s nothing there.” — Sen. Lindsey Graham (R-SC), in KCCI interview, arguing President Trump did nothing wrong in an attempt to force Ukraine to investigate Joe Biden.

Said Swalwell: “We have enough evidence from the depositions that we’ve done to warrant bringing this forward, evidence of an extortion scheme using taxpayer dollars to ask a foreign government to investigate the president’s opponents.”

Sunday Times: “Nine Russian business people who gave money to the Conservative Party are named in a secret intelligence report on the threats posed to UK democracy which was suppressed last week by Downing Street.”

“Oligarchs and other wealthy Tory donors were included in the report on illicit Russian activities in Britain by the cross-party intelligence and security select committee, whose publication was blocked by No 10.”

“Some Russian donors are personally close to the prime minister.”

A plea from 33 writers in the New York Times:

“Please stop using the Latin phrase ‘quid pro quo’ regarding the impeachment inquiry. Most people don’t understand what it means, and in any case it doesn’t refer only to a crime. Asking for a favor is not a criminal act; we frequently demand things from foreign countries before giving them aid, like asking them to improve their human rights record.”

“That is not a crime; the crime is President Trump’s demand for something that will benefit him personally. But using this neutral phrase — which means simply ‘this for that’ — as synonymous with criminality is confusing to the public. It makes the case more complicated, more open to question and more difficult to plead.”

“Please use words that refer only to criminal behavior here. Use ‘bribery’ or ‘extortion’ to describe Mr. Trump’s demand to President Volodymyr Zelensky of Ukraine, making it very clear that this is a crime. The more we hear words that carry moral imputations, the more we understand the criminal nature of the act.”

New York Times: “In Seeking to Join Suit Over Subpoena Power, Mulvaney Goes Up Against the President”: “Even in a White House of never-befores, this may be one of the more head-spinning: The president’s chief of staff is trying to join a lawsuit against the president.

“Mick Mulvaney works only about 50 steps from the Oval Office as he runs the White House staff but rather than simply obey President Trump’s order to not cooperate with House impeachment investigators, he sent his lawyers to court late Friday night asking a judge whether he should or not.

“To obtain such a ruling, the lawyers asked to join a lawsuit already filed by a former White House official — a lawsuit that names ‘the Honorable Donald J. Trump’ as a defendant along with congressional leaders. The lawyers tried to finesse that by saying in the body of their motion that the defendants they really wanted to sue were the congressional leaders, but their own motion still listed Mr. Trump at the top as a defendant because that is the suit they sought to join.”

Charles Pierce at Esquire: “Friday’s Transcripts of the Day were those of Fiona Hill and Colonel Alexander Vindland, and, yes, they pretty much prove that the president* is as guilty as sin, even as his own sins, which are considerable. But the most entertaining parts of the new transcripts, and the sections that give us some kind of indication as to where the open hearings might go, are those featuring the floundering attempts by various Republicans to derail the proceedings in one way or another. And when it comes to Republican Flounders, there’s no flounder more floundering than Rep. Matt Gaetz (R-Breathalyzer), Republican of Florida.

You may recall that Gaetz was one of the leaders of the pack of Republican congresscritters who bum-rushed the secure area in which the depositions were held. In the latest transcripts, the actual moment of Gaetz’s triumph, which occurred during Hill’s time before the committee, is captured. Intelligence committee chairman Adam Schiff was having none of this, and pretty plainly wanted Gaetz to get up off of his last nerve.”