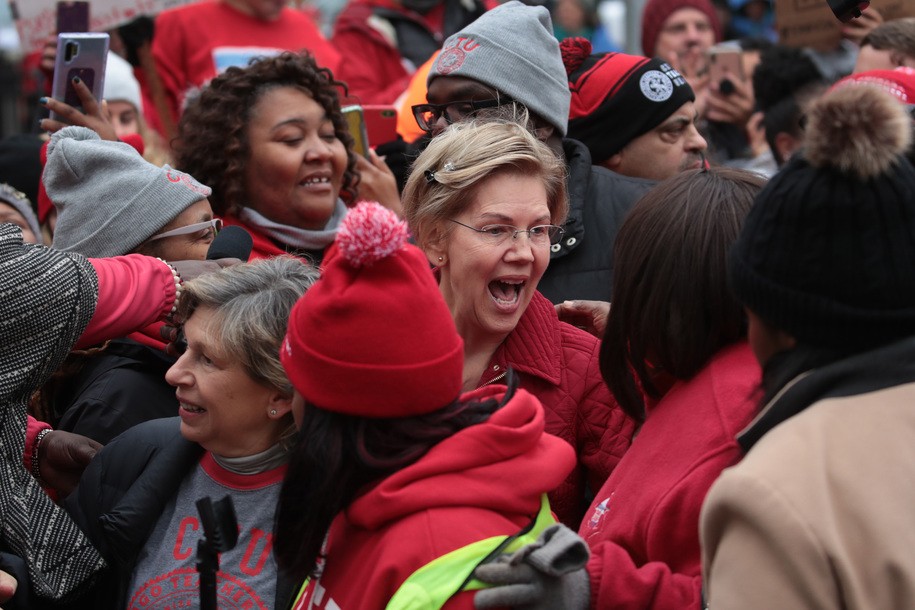 New York Times: “In ways overt and subtle, Joseph Biden, his campaign and his allies have begun mounting personal attacks on his most formidable rival in the 2020 primary race, portraying her as embracing a rigid, condescending approach that befits a former Harvard professor with an ambitious policy agenda.”

“It is a politically risky case to make against a leading female candidate, especially to a Democratic primary electorate that has so far signaled little appetite for intraparty warfare. Women historically make up a majority of Democratic primary voters, and for many, memories of attacks against Hillary Clinton in 2016 are still fresh.”

“The aggressive approach is also new territory for Mr. Biden, the former vice president who served for decades as a decorous senator and typically tempers rebukes of opponents with mentions of their good character.”

Sen. Amy Klobuchar (D-MN) told CNN that women in politics are held to a higher standard than men, arguing that a female candidate with Mayor Pete Buttigieg’s experience would not make it to the presidential debate stage.

Washington Post: “Klobuchar’s comments mark the latest instance of a 2020 presidential contender taking aim at Buttigieg, a newcomer on the national political stage whose ascent in the fundraising race and in polls for the Democratic nomination has taken many by surprise.”

Sources close to Mike Bloomberg tell Axios that last week’s announcement was partly a trial balloon to gauge interest and preserve the former mayor’s options — but his own very extensive polling remains far from convincing.

“Tonight we say to Michael Bloomberg and other billionaires: Sorry, you ain’t gonna buy this election.” — Sen. Bernie Sanders, quoted by the Washington Post.

A new Morning Consult poll finds Michael Bloomberg is running at 4% nationally as he teases a presidential bid, showing that he’s well known — but widely disliked — by the Democratic electorate.

In fact, nearly 25% of likely primary voters view him unfavorably — the highest unfavorable rating in the field.

“After days of silence, Sen. Elizabeth Warren and her campaign responded with careful calibration to former vice president Joe Biden, who accused her Tuesday of holding an ‘angry, unyielding viewpoint,’” the Washington Post reports.

Warren turned the criticism into a rallying cry: “I’m angry and I own it.”

She added: “Over and over, we are told that women are not allowed to be angry. It makes us unattractive to powerful men who want us to be quiet.”

She continued: “Well, I’m angry and I own it. I’m angry on behalf of everyone who is hurt by Trump’s government, our rigged economy, and business as usual.”

Bloomberg said no at the time.

Sen. Bernie Sanders responded to the report when asked by the Des Moines Register: “They’ve got class solidarity. The billionaires are looking out for each other. They’re willing to transcend difference and background and even politics.”

JMC Analytics notes that early voting in the Louisiana governor’s race, which ended last night, was the highest ever for a non-presidential election.

Key takeaway: “Whatever the turnout levels are from election cycle to election cycle, black voters (who are almost unanimously Democratic) tend to show up in greater numbers on the last day. But very rarely do they turn out to the extent that they did yesterday: a whopping 40% of the last day early voters were black (blacks represent 31% of Louisiana’s registered voters). As further illustration of how unprecedented black participation this strong is, in the 116 days of available data for in person early voting going all the way back to 2008, only four other times has the black early vote as a percentage of the total vote ever hit 40% (and three of those times were in 2008, when Barack Obama was first elected).”

Michael Tomasky at the Daily Beast: “So the moderates have started to unload on the lefties. That’s the story line in the wake of Elizabeth Warren’s bumpy rollout of her Medicare for All funding plan last week. They smell a chance to arrest her momentum.

Joe Biden took a swipe at Warren on Medium.com without naming her: “Some call it the ‘my way or the highway’ approach to politics. But it’s worse than that. It’s condescending to the millions of Democrats who have a different view. It’s representative of an elitism that working- and middle-class people do not share: ‘We know best; you know nothing.’ ‘If you were only as smart as I am you would agree with me.’ This is no way to get anything done.”

Pete Buttigieg bought a ticket for the Bash Warren Express, too. “We will fight when we must fight, but I will never allow us to get so wrapped up in the fighting that we start to think fighting is the point,” he said at last Friday’s Iowa Liberty & Justice Celebration, just hours after Warren released her plan. […]

They’re understandable, but I don’t think flicking jabs at Warren is going to get them very far. No. If the “moderates”—a word I don’t like, because their programs are pretty liberal; to the left of what Barack Obama ran on in 2008—want to steal a march on Warren, they need to do something else. They need to talk about themselves, not her.

Specifically, they need to say: Look, my plan isn’t moderate! My plan is big and bold and powerful! Are you kidding me? Ten years ago, a public option was considered too radical for the Democratic Party to pass. Now it’s some gutless sellout position? Give me a break.”

Joan Walsh at The Nation on the Democratic wins in the Virginia state legislature. “Winning 15 House of Delegates seats in 2017 changed everything for Virginia Democrats, and the people they represent: They finally expanded Medicaid (to 320,000 people and counting) and hiked education funding, even while Republicans held a narrow majority. Now, flipping five more seats to take the General Assembly while also winning control of the state Senate, they’re poised to enact an inspiring roster of progressive priorities: expanding voting rights, passing the Equal Rights Amendment, enacting commonsense gun laws and drawing the state’s legislative boundaries—fairly—after the 2020 Census. With a Democratic governor—the flawed moderate Ralph Northam, grateful to progressives and voters of color for letting him survive his blackface scandal—not quite anything is possible. But almost.

Maybe most important, on Tuesday night Virginia became the first Southern state to entirely flip back to Democratic control in the post–civil rights movement era. As victorious Virginia Beach house challenger Nancy Guy said campaigning in late October: “Virginia has the chance to lead the nation again. We can join the 21st Century from the 19th.” On Tuesday night, it did.

The big win was made possible by a local and national web of women-powered resistance activism and a phenomenally diverse and mostly progressive roster of Democratic candidates. But as we observe the civil rights victory the Virginia statehouse flip represents, let’s remember that Democrats were buoyed by a court-ordered redrawn map of legislative districts that finally, in the words of National Democratic Redistricting Committee chair (and former attorney general) Eric Holder, “was not drawn to dilute the voting power of African Americans.” In other words, a fair election.”