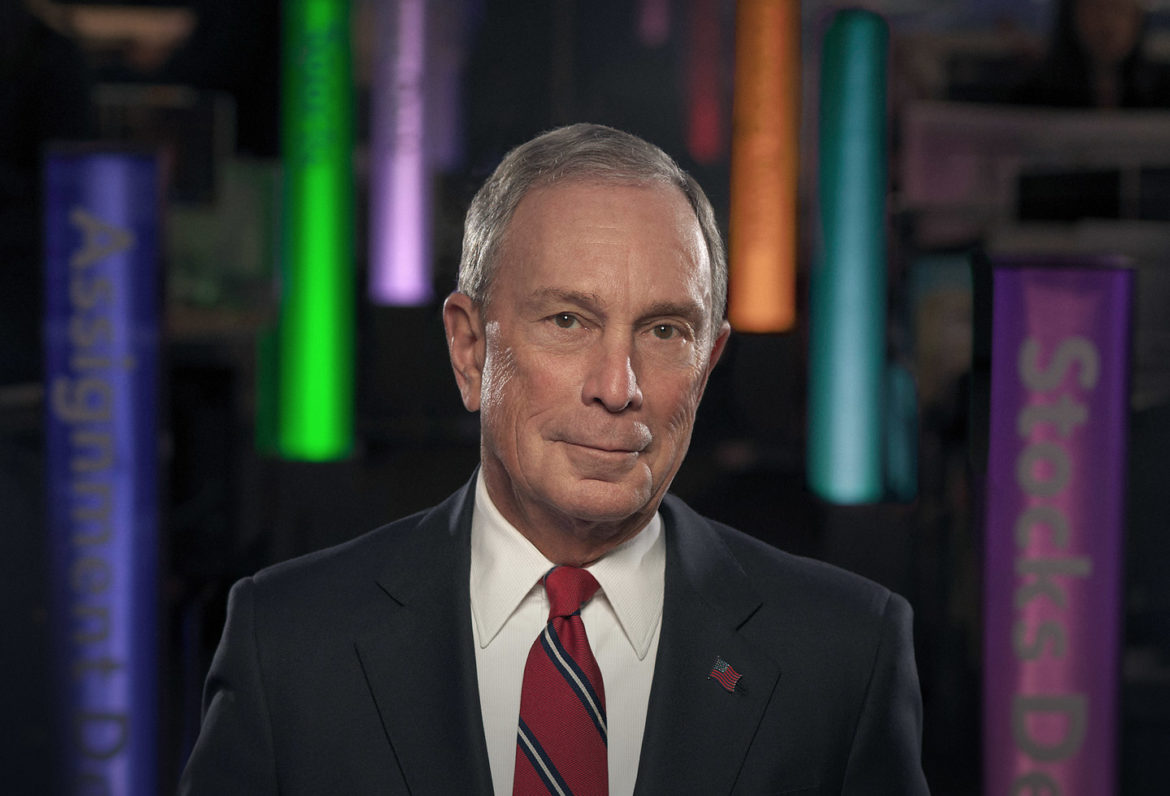 BLOOMBERG MAY RUN IN THE DEM PRIMARY. Because of all the success Tom Steyer is having, fellow Billionaire Bloomberg says let me have some of that! “Michael Bloomberg is actively preparing to enter the Democratic presidential primary and is expected to file paperwork this week designating himself as a candidate in at least one state with an early filing deadline,” the New York Times reports.

“Mr. Bloomberg, the former New York City mayor and billionaire businessman, has been privately weighing a bid for the White House for weeks and has not yet made a final decision on whether to run, an adviser said. But in the first sign that he is seriously moving toward a campaign, Mr. Bloomberg has dispatched staffers to Alabama to gather signatures to qualify for the primary there. Though Alabama does not hold an early primary, it has a Friday deadline for candidates to formally enter the race.”

New York Times: “Mr. Bloomberg and his advisers called a number of prominent Democrats on Thursday to tell them he was seriously considering the race, including former Senator Harry Reid of Nevada, the retired majority leader who remains a dominant power broker in the early caucus state. Aides to Mr. Bloomberg also reached out to Gov. Gina Raimondo of Rhode Island, the chair of the Democratic Governors Association.”

Washington Post: “The move marks a major reversal for Bloomberg, who announced in March that he would not run for president, and also serves as a public rebuke of the performance so far of former vice president Joe Biden, who has attempted to build a coalition of the same moderate Democrats that Bloomberg would court.”

“I think we what ought to do is, we ought to be building a grass roots movement to make real change in this country. I don’t think that democracy should be about people coming in and buying elections.” — Sen. Elizabeth Warren, quoted by NBC News, on Michael Bloomberg possibly entering the Democratic presidential race.

“The billionaire class is scared and they should be scared.” — Sen. Bernie Sanders, responding on Twitter to news that Michael Bloomberg is reconsidering a run for president.

IT’S 2016 ALL OVER AGAIN. Amy Walter: “These latest polls and election results are telling the same story we’ve been seeing and hearing for the last two-plus years. Trump is unpopular and polarizing, which makes it all but impossible for him to win the popular vote. But, he does have a chance to win thanks to the demographic make-up of key Midwestern battleground states…”

“If there’s any lesson to take from the torrent of data that’s been released this week, it’s that the more things change, the more they stay the same. Despite losing big in the suburbs in 2017, 2018 and 2019, the Trump campaign has zero interest in doing what it takes to win them back. Though they have more money and a better, more sophisticated campaign infrastructure, the Trump campaign is using the same playbook from 2016. Maximize turnout from the base at all costs and hope that Democrats nominate a candidate who will be even more unappealing to the suburban voters who have abandoned the party.”

SANDERS LEADS AMONG YOUNG PEOPLE. A new Harvard Institute of Politics poll finds Bernie Sanders the top choice of voters aged 18 to 29 years old with 28%, followed by Elizabeth Warren at 22% and Joe Biden at 16%.

EARLY MONEY HITS GOP SENATORS. Politico: “Democrats spent years sounding the alarm on ‘dark money’ as groups pummeled their senators. Now, the left is the side delivering the early blow.”

“A quartet of new nonprofit groups has already spent millions of dollars hammering four of the most vulnerable Republican senators on the ballot next year, sparking a wave of concern among strategists trying to protect the GOP’s slim three-seat Senate majority in 2020.”

Rick Hasen: “Will the Kentucky Legislature assist Matt Bevin in stealing the governor’s race from Democrat Andy Beshear, who appeared to have won Tuesday’s election by about 5,000 votes? Ordinarily, I would consider the possibility preposterous. We do not live in ordinary times, though, and on Wednesday Kentucky Senate President Robert Stivers raised the prospect that his institution, not the voters, could determine the outcome of the race.”

“If Stivers and Republican Kentucky legislators were to make such a hardball move without good evidence that there were major problems with the vote count, the election would likely end up in federal court, where it is anyone’s guess what would happen.”

DEMS IN BATTLEGROUND STATES PREFER MODERATE NOMINEE. “Democrats in the country’s most pivotal general election battlegrounds prefer a moderate presidential nominee who would seek common ground with Republicans rather than pursue an ambitious, progressive agenda,” according to a New York Times/Siena College poll of primary voters across six states.

“As the Democratic candidates intensify their argument over how best to defeat President Trump, their core voters in Michigan, Wisconsin, Pennsylvania, North Carolina, Arizona and Florida are counseling them to pursue a political middle ground.”

GETS THIS FUCKING BILLIONAIRE OFF ALL BALLOTS. “A top aide to Democratic presidential candidate Tom Steyer in Iowa has privately offered campaign contributions to local politicians in exchange for endorsing his White House bid,” the AP reports.

“The overtures from Pat Murphy, a former state House speaker who is serving as a top adviser on Steyer’s Iowa campaign, aren’t illegal — though payments for endorsements would violate campaign finance laws if not disclosed. There’s no evidence that any Iowans accepted the offer or received contributions from Steyer’s campaign as compensation for their backing.”

“But the proposals could revive criticism that the billionaire Steyer is trying to buy his way into the White House.”

WHICH STATES MAKE IT HARDER TO VOTE? The Guardian: “As our interactive map reveals, while the Pacific north-west is a great place to move for those who’d like their voting rights respected, the deep south is particularly repressive. There are also a number of unexpected outliers.”

SESSIONS EMASCULATES HIMSELF BEFORE TRUMP. “Jeff Sessions announced on Thursday that he’s running for the U.S. Senate seat he gave up when he became President Donald Trump’s first attorney general in 2017. But his campaign announcement video seems aimed at an audience of one: Trump, the HuffPost reports. “Sessions used the video to remind Trump of how loyal ― or at least silent ― he’d been since leaving the Justice Department.”

Before former Attorney General Jeff Sessions jumped into the Alabama Senate race this week, President Trump sent word to him “through allies that he would publicly attack him if he ran,” the New York Times reports.

HIGH ENTHUSIASM ABOUT 2020. A new Gallup poll finds 64% of American voters say they are “more enthusiastic” about voting compared with previous elections, while 28% are “less enthusiastic” and 6% say they currently have the same level of enthusiasm as they have in the past.

“Americans’ self-reported enthusiasm is among the highest Gallup has measured across presidential election years, similar to the levels recorded near the end of the 2004, 2008 and 2012 elections. Enthusiasm was more subdued in 2000 and 2016.”

VIRGINIA NOW A BLUE STATE. Larry Sabato’s Crystal Ball: “Virginia moves from Leans Democratic to Likely Democratic in our Electoral College ratings in the wake of a fourth straight November that has broken in the Democrats’ favor.”

THE SUBURBAN SHIFT AWAY FROM THE GOP. Ron Brownstein: “The shift of metro areas away from the Republican Party under President Donald Trump rumbled on in yesterday’s elections, threatening the fundamental calculation of his 2020 reelection plan.”

“Amid all the various local factors that shaped GOP losses—from Kentucky to Virginia, from suburban Philadelphia to Wichita, Kansas—the clearest pattern was a continuing erosion of the party’s position in the largest metropolitan areas. Across the highest-profile races, Democrats benefited from two trends favoring them in metro areas: high turnout in urban cores that have long been the party’s strongholds, and improved performance in white-collar suburban areas that previously leaned Republican.”

BIDEN’S SUPER PAC GETS ACTIVE. A newly formed super PAC supporting Joe Biden’s 2020 campaign is moving quickly to boost the former vice president, amassing “significant commitments” from donors and aiming to have ads up in Iowa before Thanksgiving, Politico reports.