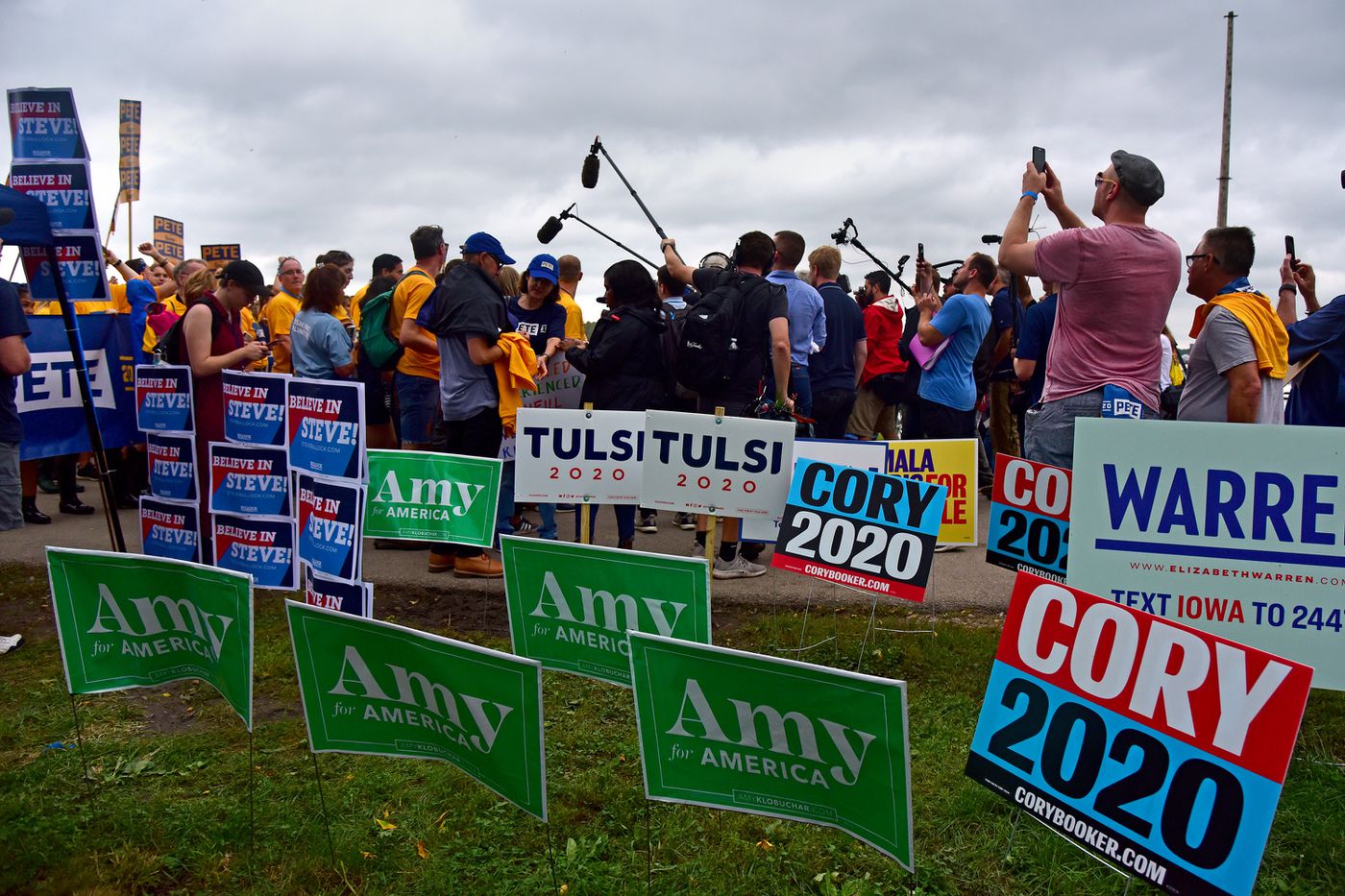 FOUR WAY RACE IN IOWA. A new Quinnipiac poll in Iowa finds Elizabeth Warren leading the Democratic presidential race with 20% support among likely caucus-goers, followed by Pete Buttigieg at 19%, Bernie Sanders at 17% and Joe Biden at 15%.

The top four are followed by Amy Klobuchar at 5%, Kamala Harris at 4%, and Tom Steyer, Tulsi Gabbard, and Andrew Yang are each at 3%. No other candidate tops 1%.

BEVIN CALLS FOR RECANVASS. Citing “multiple reports of voting irregularities,” the campaign of Kentucky Gov. Matt Bevin (R) has formally requested an official recanvass of the results in Kentucky’s election for governor, the Louisville Courier Journal reports. The recanvass will be conducted on November 14.

Bevin did not specify or in any way document what he means by voting irregularities, leaving everyone to assume that irregularity is that people voted for a Democrat instead of him. Sore crybaby loser.

MOST VOTERS DON’T WANT TRUMP IN 2020. A new Monmouth poll finds 42% registered voters nationwide feel that President Trump should be reelected in 2020, while 55% say it is time to have someone new in the Oval Office. Democrats and Democratic-leaning voters are divided over who they want to stand against Trump in 2020. The top contenders remain Joe Biden at 23%, Elizabeth Warren at 23%, Bernie Sanders at 20%, Pete Buttigieg at 9% and Kamala Harris at 5%.

BUTTIGIEG’S AIDE REPLACES HIM AS MAYOR. Pete Buttigieg’s chief of staff will replace him as the mayor of South Bend, the South Bend Tribune  reports. James Mueller beat his Republican opponent, a government teacher at the local high school, with about 65% of the vote.

THE CONSTITUTION IS ABOUT TO BE AMENDED. New York Times: “Of all the things that Virginia may pass now that Democrats have won control of the state legislature, none have been so long in the making as the Equal Rights Amendment.”

“First proposed almost a century ago and passed by Congress in 1972, the constitutional amendment — whose main clause reads, ‘Equality of rights under the law shall not be denied or abridged by the United States or by any State on account of sex’ — was ratified by only 35 of the necessary 38 states before a 1982 deadline.”

“Nearly four decades later, in 2017, Nevada became the 36th. In 2018, Illinois was the 37th. Now, Virginia’s incoming Democratic leaders have promised to take up the amendment immediately when the legislature convenes in January — and given that it failed in the Virginia Senate by only one vote when the body was under Republican control, passage is almost assured.”

“The biggest question now is whether Congress will remove the deadline — or whether the deadline was ever enforceable to begin with.”

“In supporting Warren, she is breaking with three other progressive freshmen lawmakers who make up ‘The Squad; — Representatives Alexandria Ocasio-Cortez of New York, Ilhan Omar of Minnesota, and Rashida Tlaib of Michigan. Those women recently endorsed Senator Bernie Sanders of Vermont, giving his campaign a major boost.”

“Biden built on an inflammatory Medium post he published Tuesday, in which he wrote, ‘Some call it the ‘my way or the highway’ approach to politics. But it’s worse than that. It’s condescending to the millions of Democrats who have a different view.’”

TRUMP HASN’T LEARNED HIS LESSON, INSERTS HIMSELF INTO LOUISIANA GOVERNOR’S RACE. “Donald Trump couldn’t save Matt Bevin in Kentucky. Now, the pressure is on the president to avoid a second black eye in Louisiana next week,” Politico  reports.

“Trump is thrusting himself into the state’s gubernatorial contest: He rallied there on Wednesday evening for Republican candidate Eddie Rispone, who is trying to unseat Democratic Gov. John Bel Edwards, and will make another visit two days before the Nov. 16 election. The president is also expected to record get-out-the-vote videos and robocalls, and on Wednesday morning he called into a popular Louisiana morning radio show to talk about the race.”

“Trump also plans to attend the Louisiana State vs. Alabama college football game on Saturday. Though the game is Alabama, the marquee match-up is expected to draw wide viewership among Louisianans. The blitz underscores the importance of the race to the president.”

Over six in ten Democratic voters in Pennsylvania (66%), Michigan (65%), and Wisconsin (62%) say they are more motivated to vote in next year’s 2020 presidential election than they were in 2016. This is at least 10 percentage points higher than the share of Republican voters in each state saying the same (54% in Pennsylvania, 53% in Michigan, and 46% in Wisconsin). In Minnesota, Republican voters are just as motivated as their Democratic counterparts.

Overall, 23% of voters offer issues such as health care, the economy, and immigration, as their motivation for voting in the 2020 presidential election.

ALABAMA STUDENTS TOLD NOT TO PROTEST OR BOO TRUMP. HELLO FASCISM. “The Student Government Association at the University of Alabama is warning groups that protesting President Trump during the Tide’s Saturday game vs. LSU could result in loss of reserved seating for the remainder of the season,” the Birmingham News reports. President Trump is expected to be in the audience.

IS THE GOP ABOUT TO STEAL KENTUCKY? Kentucky Senate President Robert Stivers (R) told reporters that a joint session of the Kentucky General Assembly — which is controlled by Republicans — may eventually decide the winner of last night’s close gubernatorial race, “citing a provision in the state constitution that hasn’t been used in 120 years,” the Louisville Courier Journal reports.

The state Constitution says “contested elections for governor and lieutenant governor shall be determined by both houses of the General Assembly, according to such regulations as may be established by law.” Stivers said his staff believes that might apply in this case.

If this happens, violent protest is called for.

“We are always happy to split the vote in a way that causes delicious tears. Tonight there are plenty of delicious tears from Bevin supporters.” — The Libertarian Party of Kentucky, in a statement, relishing the role of spoiler in Kentucky’s gubernatorial race.

IS KENTUCKY A BELLWHETHER? First Read: “Another factoid that will make Democrats smile today: In each of the last four off-year gubernatorial elections in Kentucky, the party that won went on to win the presidential race nationwide one year later: Republican Ernie Fletcher won in 2003, Democrat Steve Beshear won in 2007 and again in 2011, and Republican Matt Bevin won in 2015.”

THREE ELECTIONS UNDER TRUMP AND THREE GOP LOSSES. Aaron Blake: “When President Trump was elected, he promised the GOP that they would win so much they would get tired of it. But for a third successive election year since then, the Republican Party has walked away the loser.”

“The GOP incumbent was unable to capture a second term in the immediate aftermath of the state’s closely watched gubernatorial election, but he has refused to concede the race and referenced unspecified ‘irregularities’ in the voting process during his remarks Tuesday.”

WHAT HAPPENED IN KENTUCKY. David Frum: “Bevin’s personal behavior may have been extreme, but his policy priorities as governor were squarely in the GOP mainstream. Squeezing the ACA has been Trump policy, too. Nationwide, Medicaid and S-Chip enrollment has declined by 1.7 million over the past two years, a decline too big to be explained solely by improvements in the job market.”

“The central idea of the Trump candidacy and the Trump presidency has been that Trump’s abnormal behavior could win just enough votes from culturally conservative whites to overcome the unpopularity of the Republican agenda. Kentucky tested that proposition—and proved it false.”