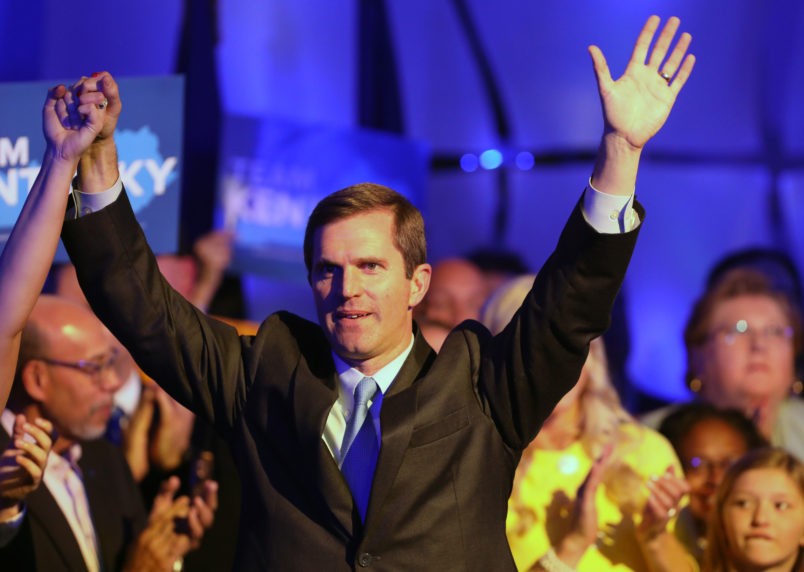 President Trump last night: “You gotta vote because if you lose, it sends a really bad message. It just sends a bad and they’re going to build it up … You can’t let that happen to me.”

Washington Post: “The Kentucky defeat has sparked concern among the party’s donors and many longtime GOP leaders who are worried that the nonstop twists of the House impeachment inquiry and Trump’s growing fury are making it increasingly difficult for Republicans to make a clear and compelling case to voters.”

Associated Press: “It’s difficult to draw sweeping conclusions from state elections, each with their own unique quirks and personalities. But there’s little doubt Tuesday’s outcome is a warning to Republicans across the nation a year out from the 2020 election and a year after the 2018 midterms: The suburbs are still moving in the wrong direction.”

Jonathan Swan: “Senior officials at the White House and Republican Governors Association thought Bevin would win, but nobody who was studying the race closely felt overly confident about that outcome.”

“Bevin was telling people he would win — but throughout the campaign, sources in the Trump political orbit expressed concerns about the poor quality of Bevin’s operation and about his weaknesses in public opinion.

Said Larry Sabato: “When you’re a Republican running statewide in Kentucky, you have to try to lose. And Bevin tried for four years, and he succeeded.”

“Democrats gained control of both houses of the Virginia General Assembly Tuesday, with election results suggesting that the party had completed a historic sweep of the state’s government,” the Washington Post reports.

“After polls closed on the most expensive and most-watched Virginia legislative races in years, incomplete tallies showed Democrats picked up at least two seats in the state Senate and four in the House of Delegates to take narrow majorities.”

New York Times: “For the first time since 1993, Democrats control both chambers in the Virginia legislature and the governor’s office — allowing them to redraw the state’s legislative boundaries after next year’s census.”

“Linking Republican incumbents to the unpopular president and criticizing them for opposing gun control measures in the aftermath of a mass shooting in Virginia Beach in May, Democratic challengers built their victory with strong showings in suburbs stretching from outside Washington to Richmond and Hampton Roads. In Fairfax County, the state’s largest jurisdiction, the last remaining Republican lawmaker was defeated.”

Philadelphia Inquirer: “The political forces that shaped last year’s midterm elections showed no signs of abating Tuesday, as voters turned on Republicans and establishment Democrats alike in races from Philadelphia and Scranton to the suburbs of Delaware and Chester Counties.”

“Locally, Democrats will hold all five seats on the Delaware County Council, a Republican stronghold since the Civil War, and also assumed a majority on the legislative body in Chester County. In Bucks County, Democrats also held a late lead for control of the board of commissioners in a close race.”

Vox: “Virginia and Kentucky demonstrated one clear thing: Democrats were fired up. No matter what caveats exist in each state, that’s great news for the Democratic party heading into 2020.”

“Beyond his turnout wins, Beshear’s message could give the national party hope. He ran primarily on health care and education — vowing to protect Medicaid and boost funding for teachers — a strategy Democrats could replicate in other Trump-friendly states and regions like West Virginia, another state that has seen teachers strikes.”

“Democrats also won their enthusiasm test in Virginia… Anecdotally, turnout was up significantly in the state. That’s significant especially because Virginia had no governor’s race or US Senate on the ballot, presenting both Democrats and Republicans with a unique opportunity to show how strong the party apparatus was.”

“A Virginia Democrat who lost her 2017 race for the state’s House of Delegates after another candidate’s name was picked out of a bowl in a tie-breaker handily ousted her Republican foe Tuesday,” CNN reports.

“Shelly Simonds defeated Republican incumbent Delegate David Yancey, allowing her to claim the seat she lost two years ago after a state law dating back to 1705 was used to settle the 11,608-vote tie between the two candidates. Simonds won the rematch with 11,556 votes to Yancey’s 8,069 votes.”

“Juli Briskman, who famously flipped off President Trump’s motorcade in a viral 2017 photo, won her race Tuesday night for a seat on the Loudoun County Board of Supervisors in Virginia,” the HuffPost reports.

John Cassidy: “At least mathematically, the elements of a successful battleground-state strategy are clear. The Democratic candidate needs to excite voters in the Democratic base, particularly minorities and highly educated whites, while also trying to appeal to as many people as possible in Trump’s core demographic, which consists of whites who don’t have a four-year college degree. Contrary to some analyses, both of these things are necessary: it isn’t an either-or choice. The Democrats need a dual strategy.”

“A new study by Ruy Teixeira and John Halpin, two Democratic-leaning political scientists who have been tracking demographic and voting trends for decades, shows why. According to the study, roughly twenty-nine per cent of eligible voters next year will be nonwhite, about thirty per cent will be whites with college degrees, and slightly less than forty-two per cent will be whites without college degrees. On this basis alone, it seems likely that the Democrats could put together an electoral victory simply by turning out their base. But that is misleading, because none of the three major groups vote monolithically.”

A new Politico/Morning Consult survey finds 56% of voters expect the president to be reelected next year, including 85% of Republicans and 51% of independents. By comparison, more than a third of Democrats (35%) say the same.

A new Monmouth poll finds President Trump’s approval rating remains stable as the impeachment inquiry intensifies, with evidence that both sides of public opinion are digging in.

Key finding: “Currently, 27% of Americans say they approve of Trump’s job performance and cannot foresee anything that would change their minds, while a larger number (36%) say their disapproval of the president is unmovable. Compared with January 2018, firm approval has increased by 6 points from 21% and firm disapproval has increased by 6 points from 30%. On the other hand, the number of people who say their opinion of Trump could change has decreased from 41% in January 2018 to 31% now.”

Jonathan Rauch and Ray La Raja: “Americans rarely pause to consider just how bizarre the presidential nominating process has become. No other major democracy routinely uses primaries to choose its political candidates, nor did the Founders of this country intend for primaries to play a role in the republican system they devised.”

“Abraham Lincoln did not win his party’s nomination because he ran a good ground game in New Hampshire; rather, Republican elders saw in him a candidate who could unite rival factions within the party and defeat the Democratic nominee in the general election. Today’s system amounts to a radical experiment in direct democracy, one without precedent even in America’s own political history.”

CNN: “Buttigieg spent much of his time on his three-day, 330-plus mile bus tour through northern Iowa preaching the need for unity, drawing a not-so-subtle contrast with Warren’s focus on fighting. It’s a new strategy that exemplifies the belief inside the Buttigieg campaign that Warren — whose growing and powerful campaign in the state is seen by Iowa operatives as outflanking former Vice President Joe Biden or Vermont Sen. Bernie Sanders — is the biggest obstacle the South Bend, Indiana, mayor faces over finishing first in Iowa.”

McClatchy: “Trump can win reelection in a number of ways: He could win back moderates in the suburbs, make inroads with black and Hispanic men or persuade white working-class women not to abandon him. He could also reassemble, almost to the voter, the razor-thin but winning coalition he built in 2016.”

“But perhaps the most likely way the president can win next November — and the way Republicans are already preparing in earnest for him to pursue — is with voters like Bauch, in rural regions of key battleground states, who didn’t back Trump in 2016 but are inclined to do so now.”

“When Trump won in 2016, he did so by delivering shock landslide in rural America. But rather than see his breakthrough as a high-water mark, the GOP wants more. And although it won’t be easy, Republicans insist — and Democrats privately agree — Trump can get there in places like rural Wisconsin.”

Nate Silver: “Much maligned for their performance in the 2016 general election — and somewhat unfairly so, since the overall accuracy of the polls was only slightly below average that year by historical standards — American election polls have been quite accurate since then. Their performance was very strong in the 2018 midterms, despite the challenge of having to poll dozens of diverse congressional districts around the country, many of which had not had a competitive election in years. Polls have also generally been accurate in the various special elections and off-year gubernatorial elections that have occurred since 2016, even though those are also often difficult races to poll.”

“Does that mean everything is looking up in the industry? Well, no. We’ll introduce some complications in a moment. But I do want to re-emphasize that opening takeaway, since the media is just flatly wrong when it asserts that the polls can’t be trusted. In fact, American election polls are about as accurate as they’ve always been.”

FiveThirtyEight has updated their pollster ratings ahead of the 2020 presidential election.

“More than 30 high-ranking Obama administration officials are hosting a Wednesday soiree for Joe Biden intended to be equal parts fundraiser and public show of support for the former vice president’s 2020 campaign,” Politico reports.