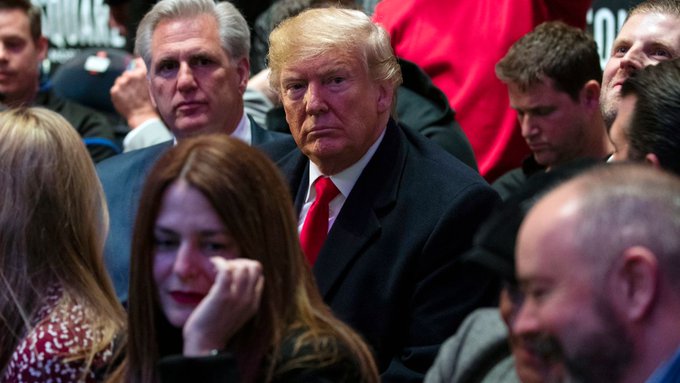 A lawyer for the whistleblower who reported concerns about President Trump’s dealings with Ukraine told CBS News he offered to have Republicans on the House Intelligence Community submit questions to his client directly without having to go through the committee’s Democratic majority.

Zaid went on to slam President Donald Trump and his fellow Republicans, who have “sought to expose our client’s identity which could jeopardize their safety, as well as that of their family.”

The lawyer said the whistleblower’s legal team has offered the majority and minority leaders of the House and Senate Intelligence committees to have the whistleblower answer their questions “in writing, under oath & penalty of perjury.”

President Trump was welcomed into Madison Square Garden Saturday night with heavy booing from the crowd. Man, UFC fans are not flaming librerals, even if they are from New York.

Politico: “Her reelection contest is already on track to be the state’s most expensive race ever. And Trump is eager to compete for the state’s four Electoral College votes with a campaign aimed at white, working-class voters.”

“If she votes to acquit the president, the state’s resurgent Democratic Party and its national allies are likely to clobber her as out of step with the state’s light blue hue. And if she votes to remove Trump from office after a Senate trial, she’ll risk dampening support from the conservative base and raising the ire of the president himself.”

White House counselor Kellyanne Conway told CNN that she doesn’t know whether President Trump held up aid to Ukraine in order to pressure the country’s new leadership to probe former Vice President Joe Biden and his son, though she said all that matters is “they’ve got their aid.”

During a press gaggle outside the White House, Trump was asked if he had any evidence of his baseless claim that Vindman is a “Never Trumper”– the kind of Republican whom Trump has described as “human scum.”

“We’ll be showing that to you real soon, okay?” the President said. So we can add witness intimidation to the list of impeachment articles.

Trump wouldn’t rule out shutting down the government to hinder the impeachment investigation, which Senate Minority Leader Chuck Schumer had raised as a “worrisome” possibility last week.

A new Fox News poll shows Joe Biden leads the nomination race with the backing of 31% of Democratic primary voters, followed by Elizabeth Warren at 21%, Bernie Sanders at 19%, and Pete Buttigieg at 7%.

After years of touting the impenetrability of a border wall, President Trump said Saturday that “you can cut through any wall” as reports surfaced of smugglers sawing through newly erected barriers with readily available power tools, Politico reports.

Said Trump: “We have a very powerful wall. But no matter how powerful, you can cut through anything, in all fairness. But we have a lot of people watching. You know cutting, cutting is one thing, but it’s easily fixed. One of the reasons we did it the way we did it, it’s very easily fixed. You put the chunk back in.”

“Michael Cohen was told that if he stuck to his account of President Trump’s relationship to Moscow, the president ‘loves you,’ according to a bombshell document from the Robert Mueller investigation,” the HuffPost reports.

“The memos also reveal that one-time Trump campaign manager and now convicted felon Paul Manafort continued to communicate with campaign staff until just days before the election even though he had been fired months earlier after he came under a cloud because of his links to Russian interests.”

The White House has instructed Robert Blair, a top adviser to Donald Trump’s chief of staff, not to appear before the Congressional committees leading the impeachment investigation into the president, the Financial Times reports.

Robert Blair’s lawyer, Whit Ellerman, told CNN his client, who was on the call in which President Donald Trump asked the Ukrainian president to investigate Joe Biden, will follow the White House’s order not to testify.

“In light of the clear direction he has been given by the executive branch, Mr. Blair has respectfully declined to appear and testify,” Ellerman said. “Nevertheless, he will fulfill all his legal duties once that conflict is appropriately resolved.” Ellerman said Blair would not comply with a subpoena from impeachment investigators either because the White House’s order “covers subpoenas.”

President Trump’s top aides considered asking Twitter for a 15-minute delay on his tweets early on in his presidency, the New York Timesreports.

However, the aides ultimately decided against the move out of fear the practice would be leaked to the press, or that Trump himself would learn of the delay.