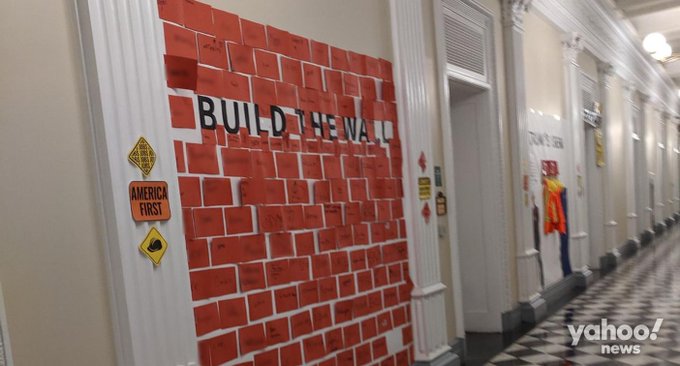 Yahoo News reports that the White House Halloween included an event that made children build a wall. “The party, which took place inside the office building used by White House staff, included the families of executive-branch employees and VIP guests inside and outside government. Even though many of the attendees were members of President Trump’s administration, not everyone thought the Halloween game was a treat.”

Said one person: “Horrified. We were horrified.”

BuzzFeed News sued the U.S. government for the secret files — subpoenas and search warrant as well as all the emails, memos, letters, talking points, legal opinions, and interview transcripts it generated — used to draft the Mueller report.

The first batch are belong released now. They will continue to be published once a month for the next eight years.

“President Trump said that Homeland Security official Chad Wolf is now acting DHS secretary — and an agency spokesperson promptly replied that he is not,” Politico reports.

“Trump told reporters before leaving for a campaign rally in Mississippi that Wolf had replaced acting DHS Secretary Kevin McAleenan, whose last day in the job was supposed to be Thursday. McAleenan had planned to extend his stay until Nov. 7, but Trump said Wolf was acting secretary already.”

“But DHS disputed that in a written statement several minutes later, saying that McAleenan is still in charge.”

New York Times: “By retweeting suspect accounts, seemingly without regard for their identity or motives, [President Donald Trump] has lent credibility to white nationalists, anti-Muslim bigots and obscure QAnon adherents like VB Nationalist, an anonymous account that has promoted a hoax about top Democrats worshiping the Devil and engaging in child sex trafficking.”

“To assess this unprecedented moment, the New York Times examined Mr. Trump’s interactions with Twitter since he took office, reviewing each of his more than 11,000 tweets and the hundreds of accounts he has retweeted, tracking the ways he is exposed to information and replicating what he is likely to see on the platform. The result, including new data analysis and previously unreported details, offers the most comprehensive view yet of a virtual world in which the president spends significant time mingling with extremists, impostors and spies.”

“Three of President Trump’s top advisers met with him in the Oval Office in May, determined to convince him that the new Ukrainian leader was an ally deserving of U.S. support,” the Washington Post reports.

“They had barely begun their pitch when Trump unloaded on them, according to current and former U.S. officials familiar with the meeting. In Trump’s mind, the officials said, Ukraine’s entire leadership had colluded with the Democrats to undermine his 2016 presidential campaign.”

Said Trump: “They tried to take me down.”

“Smuggling gangs in Mexico have repeatedly sawed through new sections of President Trump’s border wall in recent months by using commercially available power tools, opening gaps large enough for people and drug loads to pass through, according to U.S. agents and officials with knowledge of the damage,” the Washington Post reports.

“The breaches have been made using a popular cordless household tool known as a reciprocating saw that retails at hardware stores for as little as $100. When fitted with specialized blades, the saws can slice through one of the barrier’s steel-and-concrete bollards in a matter of minutes,.”

“After cutting through the base of a single bollard, smugglers can push the steel out of the way, allowing an adult to fit through the gap. Because the bollards are so tall — and are attached only to a panel at the very top — their length makes them easier to push aside once they have been cut and are left dangling.”

Aaron Blake: “In recent days, Republicans have maintained a laserlike focus on a very narrow defense of Trump: that there was nothing illegal about his July 25 phone call with Ukraine’s president. In doing so, they are glossing over and even outright ignoring a growing mountain of evidence that much more explicit quid pro quos existed outside that call.”

“I’ve said from the beginning that the call contains no explicit quid pro quo, but that doesn’t mean one didn’t exist elsewhere. Indeed, six people have now said as much publicly — including three under oath. If anything, the call fills out the details of a president who badly wanted these investigations, and now we’re learning about what people did behind closed doors to make them happen — including allegedly dangling hundreds of millions of U.S. government dollars and a long-sought White House meeting.”

“President Trump has sought to intimidate witnesses in the impeachment inquiry, attacking them as ‘Never Trumpers’ and badgering an anonymous whistleblower. He has directed the White House to withhold documents and block testimony requested by Congress. And he has labored to publicly discredit the investigation as a ‘scam’ overseen by ‘a totally compromised kangaroo court,’” the Washington Post reports.

“To the Democratic leaders directing the impeachment proceedings, Trump’s actions to stymie their probe into his conduct with Ukraine add up to another likely article of impeachment: Obstruction.

“The centerpiece of House Democrats’ eventual impeachment charges is widely expected to be Trump’s alleged abuse of power over Ukraine. But obstruction of Congress is now all but certain to be introduced as well, according to multiple Democratic lawmakers and aides, just as it was five decades ago when the House impeached then-president Richard Nixon.”

“The video of the rally is the latest example of how the pair who had little record of donations to candidates before 2018, wielded their proximity to Giuliani and used political donations to gain access to the president and political campaigns.”

Philip Rotner notes the process will have three phases prior to any impeachment vote by the full House:

Jonathan Chait: “Republicans have spent weeks calling impeachment proceedings a coup, and then a witch hunt. Confusingly, they appear to believe witch hunts are quasi-judicial proceedings run by actual witches, and accordingly circulated merchandise depicting Democrats as a coven.”

“Then yesterday — of all days to stop talking about witches! — they made the puzzling decision to switch metaphors again, and begin likening impeachment to a Soviet show trial. It was as their sole messaging objective was to make Arthur Miller turn over in his grave.”

Said Pelosi: “We’re on a path to yes, and I think every day brings us closer to agreement. I’d like to have it done as soon as it’s ready. I wouldn’t rule it out next year. Hopefully we can do it sooner, but I said when it’s ready we’ll do it.”

House Intelligence Committee chairman Adam Schiff told PBS Newshour that transcripts of the closed-door interviews in the impeachment inquiry could be released “early next week.”

Said Schiff: “You know, I think early next week is probably the realistic time. And we still need to go through some of the transcripts and excise any potentially classified information or personal information. But they will be released very soon.”