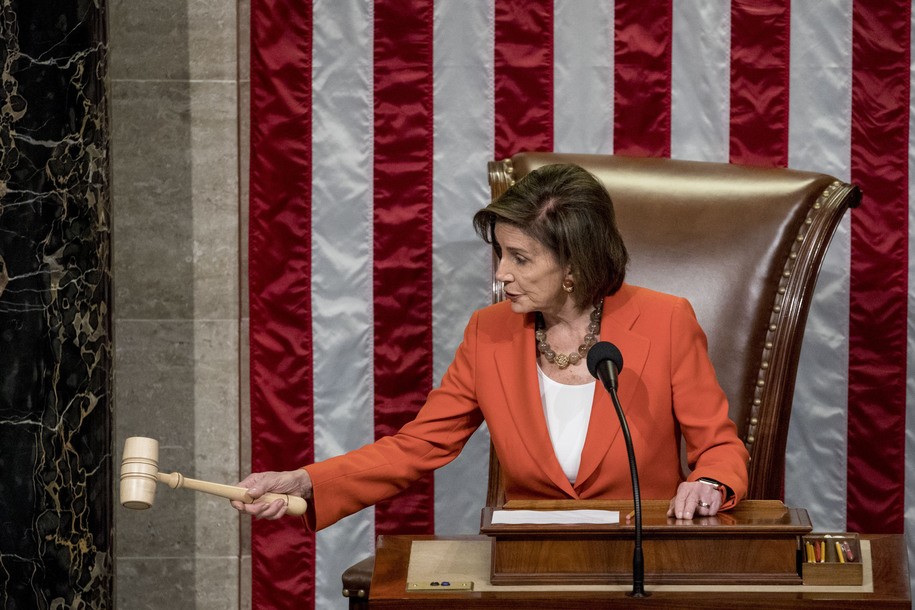 The impeachment resolution introduced by the Democratic majority in the House of Representatives reached a majority, 232 to 196, clearing the way for public hearings.

Reps. Colin Peterson (D-MN) and Jeff Van Drew (D-NJ) voted against the resolution, while every House Republican opposed the measure.

Rep. Justin Amash (I-VT), who recently left the Republican party, joined the vast majority of Democrats in supporting the resolution.

In a speech on the House floor, Speaker Nancy Pelosi framed the impeachment resolution, and the broader inquiry, as a measure to defend democracy.

Said Pelosi: “This Constitution is the blueprint for our republic—and not a monarchy. But when we have a president who says Article Two says I can do whatever I want, that is in defiance of the separation of powers. That’s not what our Constitution says.”

She added: “What is at stake in all of this is nothing less than our democracy.”

“A federal judge in Washington expressed disbelief that the White House could control what its former officials might talk about, when they’re subpoenaed by the House of Representatives or otherwise,” CNN reports.

Said Judge Katanji Brown Jackson: “We don’t live in a world where your status as a former executive branch official somehow shields you or prevents you from giving information.”

“The lawsuit is over whether former White House counsel Don McGahn must appear for testimony in the House. Democrats issued the subpoena in April, though he ignored their demands and didn’t show up.”

Why were Democrats nearly unanimous? The New York Times: “Democrats are buoyed by internal polling conducted by their campaign arm, which found that their candidates lead Republican candidates by three percentage points in House battleground districts, and by eight points in all districts, according to a Democratic aide who spoke anonymously to share details of the private survey.”

“A National Security Council aide testified on Thursday that a top diplomat who was close to President Trump told him that a package of military assistance for Ukraine would not be released until the country committed to investigating Mr. Trump’s political rivals, corroborating a key episode at the center of the impeachment inquiry,” the New York Times reports.

“The closed-door deposition by Timothy Morrison, who announced his resignation on Wednesday on the eve of his appearance before impeachment investigators, suggests that a Trump-appointed ambassador proposed a quid pro quo in which security assistance money allocated by Congress would be provided only in exchange for the political investigations the president was seeking. His account confirmed the one given last week by Ambassador William B. Taylor Jr., the top American diplomat in Ukraine, during his private testimony.”

ABC News: “Vindman, the first current White House official to cooperate with House impeachment investigators and appear on Capitol Hill for a closed-door deposition, is willing to testify publicly in the next phase of the inquiry.”

“Vindman, the first witness to appear on Capitol Hill with firsthand knowledge of the call, has not yet been formally contacted by House impeachment investigators about testifying in public.”

NBC News: “Less than a month after he was named President Trump’s cybersecurity adviser in 2017, Rudy Giuliani walked into an Apple store in downtown San Francisco. He wasn’t looking for a new gadget. Giuliani was looking for help.”

“He was locked out of his iPhone because he had forgotten the passcode and entered the wrong one at least 10 times.”

Sen. Chuck Grassley (R-IA) is planning to take back the gavel of the influential Judiciary Committee if Republicans keep control of the Senate after the 2020 election, The Hill reports.

“Grassley chaired the Judiciary Committee for four years, from 2015 to 2019, but handed over the top spot to Sen. Lindsey Graham (R-SC) in January so that he could take over the Finance Committee.”

“But under Senate GOP rules, Grassley hits his term limit for the finance panel at the end of 2020. He’s informed Graham that he intends to use his seniority to become chairman of the Judiciary Committee starting in 2021.”

At a GOP fundraising event, President Trump reflected on the shooting of House Minority Whip Steve Scalise (R-LA) a few years ago “and remarked how tough the Louisiana Republican is – and Trump quipped he wouldn’t recommend getting shot as a weight loss plan,” Politico reports.

Trump also said Scalise’s wife “cried her eyes out when I met her at the hospital that fateful day… I mean not many wives would react that way to tragedy, I know mine wouldn’t.”

I know. She would only shed happy tears.

CNN: “The impeachment crisis that’s consumed the White House is causing new turbulence at the National Security Council, where officials are wondering whether their efforts are being undermined and worry the President could sour on the entire body, ignoring its expert advice as he fumes about its role in the current crisis.”

“Already a bumpy workplace under Trump, the National Security Council’s career civil servants now find themselves under fresh scrutiny from an already-skeptical President and his inner circle.”

The Hill: “Senate Republicans are taking the House impeachment proceedings against President Trump more seriously as damaging revelations against the president mount and the possibility of a quick dismissal of the charges shrinks.”

“Army Lt. Col. Alexander Vindman, the top Ukraine adviser at the White House, had been listening to the call and was disturbed by the pressure Trump had applied to Ukrainian President Volodymyr Zelensky to investigate his political rivals.”

“Vindman told Eisenberg, the White House’s legal adviser on national security issues, that what the president did was wrong… Scribbling notes on a yellow legal pad, Eisenberg proposed a step that other officials have said is at odds with long-standing White House protocol: moving a transcript of the call to a highly classified server and restricting access to it,”

“White House officials and congressional Republicans have begun early talks on a new package of tax reductions and economic growth measures, under pressure from President Trump, who is agitating to announce a new tax cut proposal heading into the 2020 election,” the Washington Postreports.

“The early-stage discussions reflect Trump’s desire to refocus the economic narrative amid some signs of a slowing economy, and after the major Republican tax cut package of 2017 failed to produce enduring economic benefits or political gains for the GOP.”

“Each of the Trumps filed a ‘declaration of domicile’ saying that the Mar-a-Lago Club, Mr. Trump’s resort in Palm Beach, will be their permanent residence.”