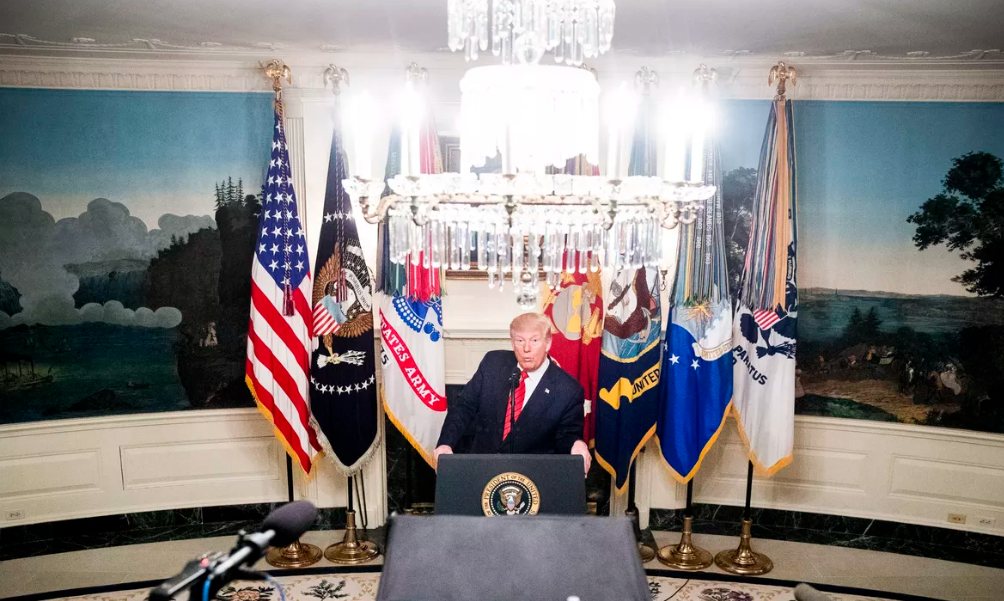 President Trump announced that the leader of the Islamic State, Abu Bakr al-Baghdadi, was killed “whimpering and crying” while running away from U.S. special forces.

This is great news for the US and its allies and really, all humans who believe in humanity. The special forces and the intelligence community deserve all the credit we can give them.

Donald Trump appeared to even take this gift, this made for TV moment for him to act like a real President, and fuck it up. First, as shown above, he gave rather graphic and gruesome detail that will be recruitment fodder for ISIS. He turned this moment into a boasting and vulgar episode that then he decided to take questions, and his answers included such gems as “this is bigger than Bin Laden.” It’s not.

Second, Bill Maher has it right: terrorists are many things, all of them evil, but the one thing they are not is cowards. He blew himself up. That is not a cowardly action. It is a murderous one.

Third, as will be shown below, Trump was actually golfing during the operation rather than being in the Situation Room, as his schedule shows. He did not watch the operation live. Trump staged a photo two hours after the operation was over to make it appear that he and his Defense Secretary and generals were watching it live. Fourth, that last fact makes you wonder how intimately he was involved in the planning of the operation. Indeed, there is a story included below from the New York Times that makes it appear that the Pentagon and/or CIA went ahead with the operation with the bare minimum of Trump involvement earlier than they wanted to because of Trump’s sabotaging efforts in declaring without consultation that we would leave Syria and the Kurds.

“Trump eschewed the serious televised statement his predecessors might have offered. Obama, for example, said about 1,390 words when announcing the death of Osama bin Laden, and took no questions.”

“Trump, in contrast, uttered almost 8,000 words and took a dozen questions, offering an unfiltered and, at times, vivid account of the raid.”

“The surprising information about the Islamic State leader Abu Bakr al-Baghdadi’s general location — in a village deep inside a part of northwestern Syria controlled by rival Qaeda groups — came following the arrest and interrogation of one of Mr. al-Baghdadi’s wives and a courier this past summer,” the New York Times reports.

“Armed with that initial tip, the C.I.A. worked closely with Iraqi and Kurdish intelligence officials in Iraq and Syria to identify Mr. al-Baghdadi’s more precise whereabouts and to put spies in place to monitor his periodic movements, allowing American commandos to stage an assault Saturday in which President Trump said Mr. al-Baghdadi died.”

“President Trump admitted on Sunday the White House did not inform some key Democrats about the daring raid that resulted in the death of ISIS leader Abu Bakr al-Baghdadi,” CNN reports.

“The move to not make notable leaders aware goes against the usual tradition for such high-profile operations. The bipartisan praise for the US mission was undercut by criticism that the Trump administration did not inform congressional leaders about it ahead of time and came amid broader concerns about the strategy in the region after the US removed troops from Syria.”

“The CIA has targeted Islamic State militant group spokesperson Abu al-Hassan al-Muhajir in a new operation that comes one day after the organization’s leader was killed in a Joint Special Operations Command raid,” Newsweek reports.

Lawfare: “The eventual tone of Trump’s remarks… diminished the solemnity of the moment. This could have been a signature moment for the president, giving him a chance to offer a powerful message of purpose and unity. Instead,Trump gloated that Baghdadi ‘died like a dog. He died like a coward’ and that he ‘spent his last moments in utter fear, in total panic and dread, terrified of the American forces bearing down on him.’ I hope all that is true, but of course there is no way to know Baghdadi’s feelings as he faced death, and such boastful speculation is unworthy of the seriousness these events deserve.”

“Trump’s speech and his subsequent responses to reporters’ questions also meandered, with the president repeating himself and bringing in the Muslim ban, among other issues. He called the terrorists ‘losers’ and ‘frightened puppies,’ language more suitable for the playground than the White House.”

NBC News: “While that House-side inquiry has put a heat lamp on Republican senators from states where voters aren’t thrilled with the president’s actions — particularly swing-state lawmakers who are up for re-election in 2020 — Romney’s criticism of Trump hasn’t prompted those colleagues to follow him into the political no-man’s land of finding fault with both the president’s conduct and the divisiveness of impeachment.”

“Rather, it has renewed speculation among GOP critics in Washington and in Utah that Romney has ulterior motives — jealousy, retribution, Oval Office ambition or some potent mix of all three. After all, Romney ran for president twice and lost before Trump won the job, and then Trump made him publicly audition for secretary of State before passing him over.”

The White House shot back at former chief of staff John Kelly who said he had warned President Trump that hiring a “yes man” to replace him would likely lead to impeachment, CNN reports.

Said White House press secretary Stephanie Grisham: “I worked with John Kelly, and he was totally unequipped to handle the genius of our great President.”

Gordon Sondland, the U.S. ambassador to the European Union, told House committees last week that efforts by President Trump and his allies to press Kyiv to open investigations in exchange for a White House meeting with Ukraine’s president amounted to a quid pro quo, the Wall Street Journal reports.

Trump has denied that his decision to hold up aid was related to his push for investigations, repeatedly declaring there was “no quid pro quo.” Asked by a lawmaker whether that arrangement was a quid pro quo, Sondland cautioned that he wasn’t a lawyer but said he believed the answer was yes.

A convoy of U.S. military vehicles has crossed the border from Iraq and made its way across northeastern Syria in an effort to prevent oil fields from falling into the hands of ISIS, NBC News reports.

“Republican lawmakers have used the congressional impeachment inquiry to gather information on a CIA employee who filed a whistleblower complaint, press witnesses on their loyalty to President Trump and advance conspiratorial claims that Ukraine was involved in the 2016 election,” the Washington Post reports.

“GOP members and staffers have repeatedly raised the name of a person suspected of filing the whistleblower complaint that exposed Trump’s effort to pressure Ukraine to conduct investigations into his political adversaries.”