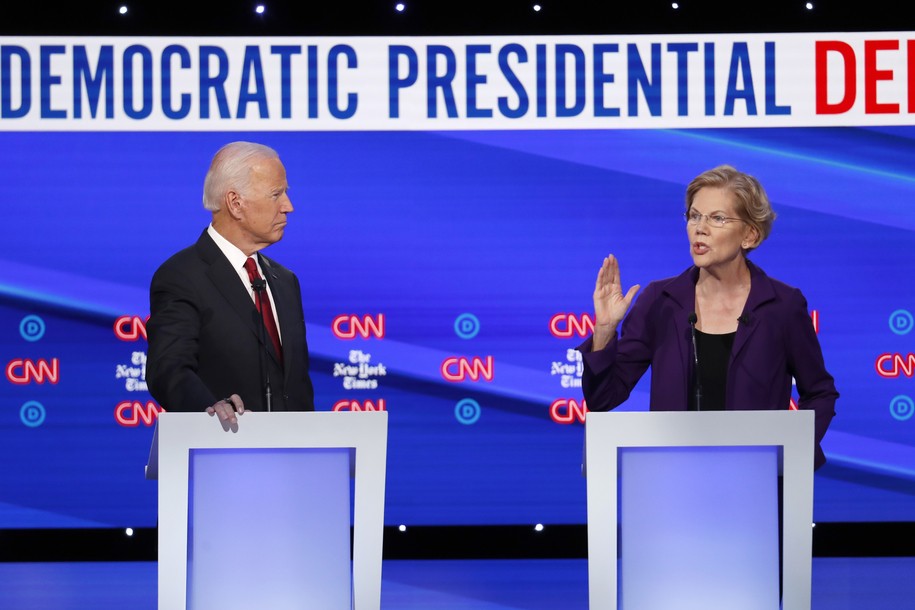 Biden is down 6 points from August, while Warren has moved up 2 points and Buttigieg has gained 4 points.

Pete Buttigieg told the Nevada Independent that he never supported Medicare for All, despite a tweet last year that suggested he did.

Said Buttigieg: “Only in the last few months did it become the case that Medicare for all was defined by politicians to mean ending private insurance, and I’ve never believed that that’s the right pathway. I still think that we should move toward an environment of Medicare for all.”

“President Trump’s campaign manager Brad Parscale has privately warned the president that his plans to reduce youth vaping by banning flavored e-cigarettes could backfire in the 2020 election — placing Trump’s reelection campaign into the middle of a governmental debate over a major public health issue,” the Washington Post reports.

“Parscale has commissioned internal campaign polling to argue that Trump supporters who use e-cigarettes could abandon the president if he follows through on a ban.”

New York Times: “Steve Ricchetti, one of Joseph R. Biden Jr.’s closest confidantes, is reaching out to wary donors to shore up support. The Biden presidential campaign is watching costs — some staff members are sleeping at homes of volunteers — and facing criticism for spending on chartered jets. Mr. Biden’s team is also urging allies to redouble fund-raising efforts before the calendar turns to 2020 and he has fewer days to devote to the money trail.”

“And in a confidential memo to top bundlers this week, Mr. Biden’s campaign manager, Greg Schultz, sought to allay growing concerns that Mr. Biden is facing a cash crunch and won’t be able to stay competitive with his rivals on the airwaves and on the ground.”

The sixth Democratic debate will be held in Los Angeles on December 19, Politico reports. The DNC has also raised the thresholds for participating — 4% in at least four qualifying polls, or 6% in two early-state polls — which could eliminate all but the top five candidates – Joe Biden, Elizabeth Warren, Bernie Sanders, Pete Buttigieg and Kamala Harris.

Garrett Graff: “The U.S. secretary of state may be a Trump favorite, but the Ukraine scandal appears to threaten Mike Pompeo’s ambitions for higher office.”

“Secretary of State Mike Pompeo discussed the U.S. Senate race in Kansas with billionaire Charles Koch and a top official from his namesake company during a visit to Wichita on Friday,” the Wall Street Journal reports.

Joe Biden told the AP he is undeterred by the ascendancy of rival Elizabeth Warren, noting that some of his supporters are already treating the primary campaign as a general election contest between him and President Trump.

Said Biden: “She doesn’t affect my strategy, period. And I’m not being facetious. I think she’s a fine person, a good candidate, but I didn’t get involved in deciding to run because of polling or a particular strategy.”

“Could I vote for a Democrat? Hell yes. If it’s Trump against Joe Biden, I’m with Biden in a heartbeat.” — Former Gov. Bill Weld (R), quoted by the Associated Press.

“Quite a few would need a big surge from this point to be able to win, although that’s happened before. I also still find it hard to imagine a path for Sanders, but as long as he keeps his faction together it’s difficult to discount him entirely. Two others who will be at the next debate, activist Tom Steyer and entrepreneur Andrew Yang, have little if any support from party actors. Yes, Donald Trump won a nomination without such support, but he was leading in the polls at this point, not lagging far behind, and dominated media coverage throughout.”

“I’m not ruling anything out after 2016. So I won’t say it’s impossible for Steyer, Yang or one of the candidates who doesn’t make it into the next debate to win the nomination — but I will say it’s increasingly unlikely.”

Beto O’Rourke dismissed criticisms of his sweeping gun control proposal, telling CBS News that he expects gun owners will go along with his plan to institute a “mandatory buyback” of high-powered rifles. Said O’Rourke: “If we’re able to pass mandatory buybacks and I’m able to sign that into law, then I fully expect our fellow Americans to turn in their AR-15s and their AK-47s.”

“A Wall Street Journal analysis of Federal Election Commission data found that at least 1,900 people contributed 50 times or more to a single presidential candidate through the end of September. The Sanders campaign laid claim to the majority of these ‘super donors,’ the Journalfound, with about 1,000 of them. The other Democrats in the race combined for at least 650 ultra-repeat givers, led by Massachusetts Sen. Elizabeth Warren, who had at least 125. And President Trump’s re-election campaign, which began in 2017, has at least 250.”

“The super donor trend is fueled by the increasing ease of giving money online—sometimes by clicking a single button or through automated recurring payments—and the premium that this year’s presidential candidates have placed on having a high volume of tiny donations, which they use as a proxy for grass roots support.”

George Soros told the New York Times that Sen. Elizabeth Warren is the top Democrat in the field vying to take on President Trump in 2020. Said Soros: “She has emerged as the clear-cut person to beat. I don’t take a public stance, but I do believe that she is the most qualified to be president.”

“Rep. Katie Porter (D-CA), a first-term lawmaker who has gained wide notice for her forceful grilling of corporate executives in congressional hearings, plans to endorse Sen. Elizabeth Warren for president,” CNN reports. “Her expected endorsement is a coup for Warren, whose rise in the polls has not yet been matched by support from Democratic elected officials. It would also be a blow to Porter’s fellow Californian, Sen. Kamala Harris, who has been counting on her home state’s primary to help her mount a comeback in the race.”

“This weekend, Democrats will mark 100 days until the Iowa caucuses,” the Washington Post reports. “Some years, and some campaigns, have minimized Iowa’s importance. This year is different: Every campaign’s strategy starts with Iowa, with visits there far outpacing visits to other early-voting states. Every campaign has more offices in Iowa than in other primary states, while two candidates (Sen. Amy Klobuchar of Minnesota and former Texas congressman Beto O’Rourke) have more offices in Iowa than in the next three states put together.”