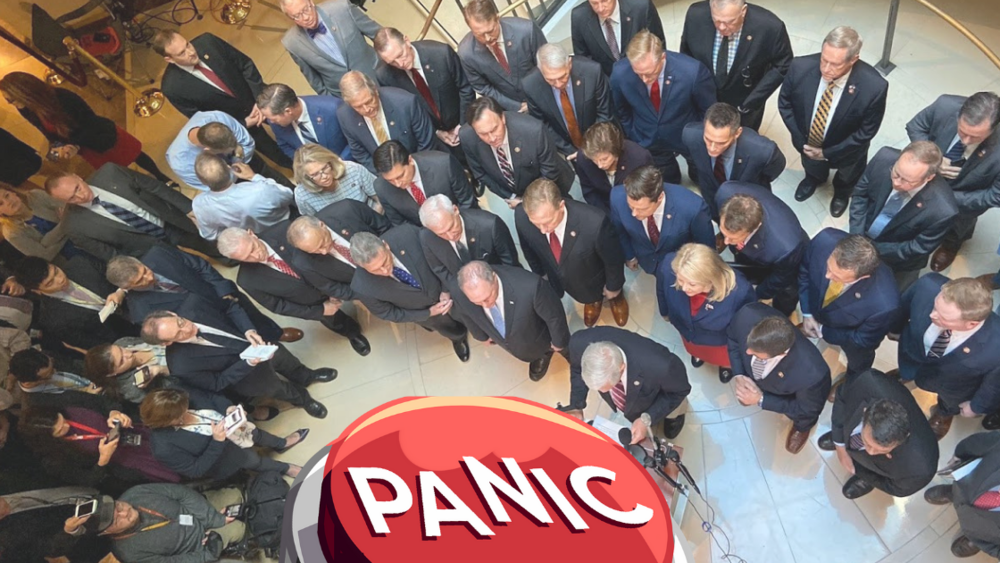 Some 20 House Republicans committed several crimes and breached our national security in a ridiculous stunt that sought to disrupt today’s deposition of Pentagon official Laura Cooper. They stormed the secured room called the SCIF and brought their unsecure phones into it, Politico reports. The standoff lasted for several hours before the criminal Republicans ended their standoff and trespass. There is video of the incident.

President Trump had advance knowledge and supported a protest by Republicans who told him they planned to barge into a secure hearing room on Capitol Hill where Democrats are holding impeachment testimonies, Bloomberg reports.

“During a nearly two-hour meeting, which focused mostly on the impeachment inquiry, lawmakers shared their plans to storm into the secure room… Trump supported the action, saying he wanted the transcripts released because they will exonerate him.”

The Daily Beast reports House Minority Leader McCarthy’s office was also told in advance of the protest. The planned impeachment testimony from a Pentagon official responsible for Ukraine policy resumed after a 5-hour delay caused by about 20 House Republicans storming the secure Capital Hill facility, the Washington Post reports.

BuzzFeed News reports that 12 of the Republicans who “barged into a secure area on Capitol Hill, interrupting a private impeachment deposition and occupying the space for a few hours” to protest the transparency of the proceedings are actually members of the Oversight or Foreign Affairs committees. That means “they have been allowed to sit in on all depositions held in the secure facility in recent weeks.”

If the attempt by some House Republicans to derail a Pentagon official’s planned testimony today seems a little desperate, it’s because it is. I’d bet the testimony Republican lawmakers are trying to block today was even more explosive. The evidence is now overwhelming that Trump abused his power. The president’s defenders are left complaining about the process or suggesting that abuse of power isn’t impeachable. They literally have nothing left.

Dan Balz: “It is no longer a question of whether this happened. It is now a question of how the president explains it and how lawmakers — especially Republicans — choose to respond to it.”

“Republican lawmakers face a new calculus as they digest the contents of the Taylor testimony. They will have great difficulty denying that the suspension of the aid was being linked to an investigation of a political rival of the president. Will they conclude that what the president did was legitimate? Will they attempt to point in other directions? Will they argue that what Trump did wasn’t right but isn’t impeachable? There’s less room for equivocation about what happened today than there was before.”

Sen. John Thune (R-SD) said that it was difficult “to draw hard, fast conclusions” from a top U.S. diplomat’s testimony but the initial reports were not good, The Hill reports. Said Thune: “The picture coming out of it based on the reporting that we’ve seen is, yeah, I would say not a good one.”

A GOP source close to Senate Majority Leader Mitch McConnell (R-KY) spoke to National Journal on the rapidly changing politics of impeachment: “This is shaping up to be a very dark moment for the Trump White House.”

The source added: “It’s getting to be a harder choice for more people. Whether that’s enough for enough senators to take decisive action… every single move has been in the wrong direction for Trump.”

Chris Cillizza: “It’s worth remembering that fact at this moment as congressional Republicans find themselves confronted with a cavalcade of troubling news stories about President Trump and his conduct in office. Because while elected GOP officials have almost totally capitulated to Trump’s hostile takeover of their party, there is always a point at which you simply cannot look even quasi-objectively at the actions of this president and conclude that standing behind him remains the right (or even defensible) thing to do.”

“And this week sure looks like just that sort of breaking point moment.”

An internal memo on cybersecurity, obtained by Axios, warns that “the White House is posturing itself to be electronically compromised once again.” “That’s after at least a dozen top- or high-level officials have resigned or been pushed out of a cybersecurity mission that was established under Barack Obama to protect the White House from Russian hacking and other threats.”

NBC News: “With funding for federal operations set to expire Nov. 21, the political class here is beginning to plan for the possibility — likelihood, in the eyes of some — that President Donald Trump will shut down the government to try to turn public opinion against House Democrats and their push to impeach him.”

“Trump has a history of seeking dramatic means to alter storylines.”

“One of the two indicted associates of President Trump’s personal lawyer, Rudy Giuliani, on Wednesday tied the case to the president himself, saying that some of the evidence gathered in the investigation could be subject to executive privilege,” the New York Times reports.

“Senior White House officials suspected that a colleague whom they viewed as a political partisan was ferrying documents about Ukraine in recent months to President Trump, effectively creating another back channel to him that could warp American policy,” the New York Times reports.

“Colleagues grew alarmed after hearing that Mr. Trump had referred to Kashyap Patel, a National Security Council aide who figured prominently in Republicans’ efforts to undermine the Russia investigation, as one of his top Ukraine policy specialists and that the president wanted to discuss related documents with him…”

“Any involvement by Mr. Patel in Ukraine issues would mark another attempt by Mr. Trump’s political loyalists to go around American policymakers to shape policy toward Kiev.”

“The three House committees investigating President Trump and Ukraine have sent at least 8 letters — obtained by Axios — to key Trump administration officials over the past few days to demand that they appear as part of the rapidly expanding impeachment inquiry.”

“More than two months before the phone call that launched the impeachment inquiry into President Trump, Ukraine’s newly elected leader was already worried about pressure from the U.S. president to investigate his rival Joe Biden,” the AP reports.

“Volodymyr Zelenskiy gathered a small group of advisers on May 7 in Kyiv for a meeting that was supposed to be about his nation’s energy needs. Instead, the group spent most of the three-hour discussion talking about how to navigate the insistence from Trump and his personal lawyer, Rudy Giuliani, for a probe and how to avoid becoming entangled in the American elections.”

New York Times: “To Democrats who say that President Trump’s decision to freeze a $391 million military aid package to Ukraine was intended to bully Ukraine’s leader into carrying out investigations for Mr. Trump’s political benefit, the president and his allies have had a simple response: There could not have been any quid pro quo because the Ukrainians did not know the assistance had been blocked.”

“But in fact, word of the aid freeze had gotten to high-level Ukrainian officials by the first week in August.”

“The problem was not a bureaucratic glitch, the Ukrainians were told then. To address it, they were advised, they should reach out to Mick Mulvaney, the acting White House chief of staff.”

Kurt Bardella: “For eight years, House Republicans searched for a ‘smoking gun’ that could unravel the presidency of Barack Obama. They presided over hundreds of oversight hearings, issued more than 100 subpoenas, held the attorney general in contempt of Congress, and even formed a special select committee devoted exclusively to one investigation, on Benghazi.”

“As someone who spent five years working alongside Republicans on the Oversight Committee, I can tell you that we never found a ‘smoking gun’ like the testimony that was provided yesterday from the senior U.S. diplomat in Ukraine, William Taylor.”

“As I read through Taylor’s statement, which was given under oath, I couldn’t help but think to myself how my former Republican colleagues would have reacted if similar testimony had been given by a career diplomat during the Obama administration, especially during the Benghazi investigation, which produced 33 hearings in two years.”

“The reality is that if Pompeo, Jordan, and House Republicans had received the kind of bombshell testimony we heard from Taylor yesterday, they would have immediately moved to impeach the president.”

“President Trump announced Wednesday that the United States will lift sanctions on Turkey, saying that the Turkish government has informed the White House that it will abide by what he characterized as a ‘permanent’ cease-fire along the border with Syria,” the Washington Post reports.

“At a hastily-organized event in the Diplomatic Reception Room of the White House, Trump also used the occasion to justify his ‘America First’ foreign policy agenda, pushing back against critics by arguing that he is removing U.S. troops from a region where they should not be involved.”

Said Trump: “Let someone else fight over this long-bloodstained sand.”

“A lawyer for Donald Trump argued in federal court on Wednesday that the president could shoot someone on 5th Avenue in New York City and not be prosecuted,” Politico reports.

“The Trump administration has sought repeatedly to cut foreign aid programs tasked with combating corruption in Ukraine and elsewhere overseas, White House budget documents show, despite recent claims from President Trump and his administration that they have been singularly concerned with fighting corruption in Ukraine,” the Washington Post  reports.

John Podhoretz: “Remember when I said last week that October 17 was the worst day of the Trump presidency? Well, October 22 and has now come along to break the record. This is the day that, I think, has ensured Donald Trump’s impeachment. Not his removal. But impeachment will be bad enough.”

“Today’s key sentence: ‘Ambassador Sondland said, ‘everything’ was dependent on such an announcement, including security assistance.’”

“It comes from the testimony of acting U.S. ambassador to the Ukraine William Taylor before House impeachment investigators, and it instantly makes all but impossible the task of anyone seeking to defend Trump against the charge that he held up American military aid to Ukraine to secure a political advantage in the 2020 election.”

“What evidence of a crime do you have? Abuse of power is not a crime… The constitution is very clear that this has to be some pretty egregious behavior.”