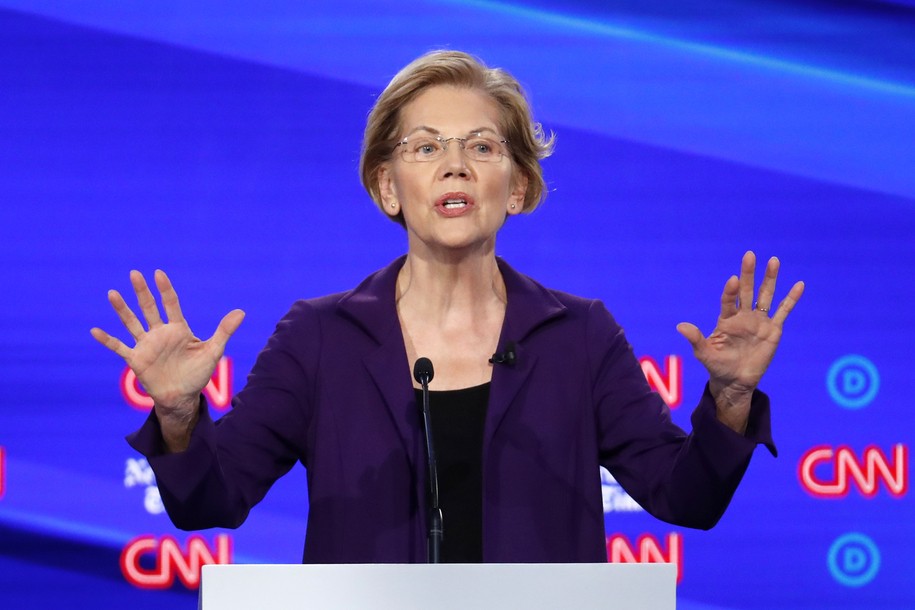 A new Quinnipiac poll finds Elizabeth Warren leading the Democratic presidential race with 28%, followed by Joe Biden at 21%, Bernie Sanders at 15%, Pete Buttigieg at 10%, Kamala Harris at 5% and Amy Klobuchar at 3%.

No other candidate tops one percent.

The poll of likely caucus-goers also asked voters to list the candidate they do not want to win the nomination. Biden and Sanders topped this list with Tulsi Gabbard third.

Rep. Tim Ryan (D-OH) announced that he has dropped out of the 2020 presidential race. There are still eighteen candidates running, though just nine have qualified for the next debate in November.

Washington Post: “Warren has promised more details within weeks, but her team faces a challenge in crafting a plan that would bring in large amounts of revenue while not scaring off voters with big middle-class tax increases.”

“The proposal could cost more than $30 trillion over 10 years. Complicating matters, she has already committed all of the money she would raise from a new wealth tax, close to $3 trillion over 10 years, to several other ideas, including child care and student debt cancellation. This has limited the Warren campaign’s options for finding additional sources of revenue without affecting middle-class Americans.”

The older “influential” Democrats default to bedwetting due to when they came up in politics, in the 1980’s and 1990’s, when Democrats were told to be Republican Lite to win. It is long past time for them to sit down and shut up.

Amy Walter: “The other big question mark hanging over all of this analysis is for where Trump sits in November 2020. The closer he is to the low-end of his approval rating trading range (35-40 percent), the easier it is to make the case that almost any Democrat can win. The closer he is to the higher end (43-46 percent), the stronger the case for Trump. Warren becomes more of a risk the less-risky he looks.”

“At this point, however, from his rage tweets over impeachment, to his disjointed policy on Syria, to his ill-advised decision to try and host an international conference at his own hotel, President Trump is doing everything possible to look like the more dangerous pick.”

New York Times: “A number of things can affect a poll’s results, including the wording of a horse-race question and the order that items are asked. In CNN and Fox News polls this year, respondents have typically been asked for their opinions on each of the Democratic presidential candidates, among other questions, before being queried about their vote preference.”

“In Quinnipiac’s polls — as well as those conducted by Monmouth University, which have also shown Ms. Warren climbing steadily — people have not typically been asked to evaluate the candidates one-by-one before giving their vote choice.”

“If such small differences in survey structure are indeed having an effect on results, it may reflect the fact that many respondents are not yet certain about their feelings.”

New York Times: “After decades of treating elections as an afterthought, college students have begun voting in force.”

“Their turnout in the 2018 midterms — 40.3% of 10 million students tracked by Tufts University’s Institute for Democracy & Higher Education — was more than double the rate in the 2014 midterms, easily exceeding an already robust increase in national turnout. Energized by issues like climate change and the Trump presidency, students have suddenly emerged as a potentially crucial voting bloc in the 2020 general election.”

“And almost as suddenly, Republican politicians around the country are throwing up roadblocks between students and voting booths.”

Jonathan Bernstein: “The key to this exercise is that Trump’s removal requires a two-thirds majority, and thus a minimum of 20 Republican senators opposing him, but there’s virtually no way he’d be convicted by a 67-33 vote. For one thing, it’s hard to envision any grouping of Republican senators that would include 20 defectors out of 53; in reality, only about a dozen of them would realistically vote against their own majority. For another, there’s safety in numbers: A lot of mainstream conservatives who might be tempted to remove Trump probably wouldn’t do so if they could be identified as the deciding vote.”

“That suggests that any removal is more likely to get a healthy majority of Republican senators than a minority. But they aren’t going to turn against Trump unless they’re confident that the party is with them — which means, among other things, that it’s not going to happen unless Republican-aligned media has turned against him. We’re not talking about Senators Mitt Romney and Lamar Alexander being ready to remove Trump backed by Never-Trump pundits; we’re talking about at least some Fox News and talk-radio hosts who have been enthusiastic supporters deciding to oppose the president, and thereby giving cover to the bulk of Republican senators.”

“All this means that removal is unlikely! But if it did happen, the key point is that Trump probably wouldn’t pose much of a threat to anyone. After all, he would’ve just been abandoned by his own party. My guess is that he’d become a minor figure overnight.”

“A coalition of top Democratic strategists and donors are intensifying conversations about setting up an outside group to bolster Joe Biden’s presidential candidacy, aiming to create a super PAC designed to fight back against a barrage of well-funded attacks from President Donald Trump’s campaign,” CNN reports.

Colorado Gov. Jared Polis (D) mocked President Trump after he said during a recent speech that the U.S. is building a border wall in Colorado, The Hill reports.

Sarah Longwell: “Part of any collective-action problem is the disincentive to go first. Senators who want to vote against Trump will want to wait until the last minute, letting their more courageous colleagues take the political hit by going first. The senator going first might get hailed as a hero when the history books are written. But in the moment, he or she will be used as a human shield. It won’t be fun, and it’s a big ask for any sitting Republican.”

“Romney is best suited for the job. We already know, from The Atlantic’s McKay Coppins, that Romney is ‘taking the prospect of a Senate trial seriously—he’s reviewing The Federalist Papers, brushing up on parliamentary procedure, and staying open to the idea that the president may need to be evicted from the Oval Office.’ He’s not up for reelection until 2024, which gives him the maximum amount of leeway to make difficult votes. Even then, he represents Utah, a deep-red state where Trump’s approval rating has been underwater for much of his presidency. And that’s all assuming that Romney would even want to run for another six-year term at age 77. This all points to Romney as the perfect person to overcome the collective-action problem—he has more stature and political capital than anyone else in the Senate, but he also has the least to lose.”

Seth Moskowitz notes that a presidential campaign strategy narrowly focused on Pennsylvania, Wisconsin, and Michigan might work for the Electoral College but could hurt a candidate’s party in down-ballot Senate and House races.

Senate and House battlegrounds are scattered across the Rust Belt and Sun Belt, which could incentivize presidential candidates to compete in states that they otherwise may have overlooked.