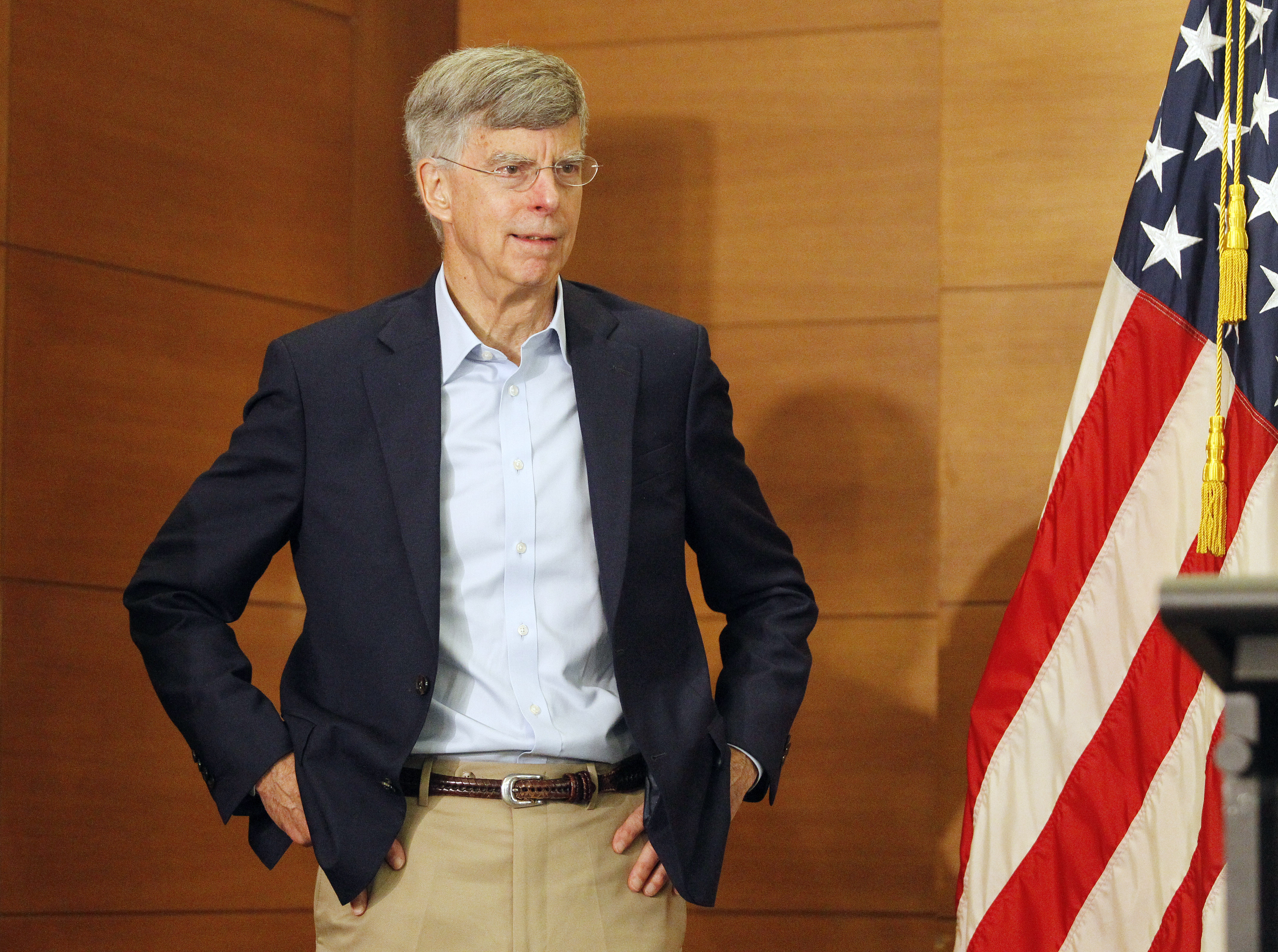 The Washington Post has obtained a copy of Ambassador Bill Taylor’s opening statement to the House committees investigating impeachment. It’s a brutal indictment of the Trump administration’s efforts to tie Ukraine military aid for political favors.

Matt Viser summarizes: “President Trump insisted, over and over there was not a ‘quid pro quo.’ But there was a quid. Followed by a pro. And then, finally, a quo.”

“William Taylor prompted sighs and gasps when he read a lengthy 15-page opening statement… Another person in the room said Taylor’s statement described ‘how pervasive the efforts were’ among Trump’s allies to convince Ukrainian officials to launch an investigation targeting former Vice President Joe Biden and another probe centering on a debunked conspiracy theory regarding the 2016 election.”

The New York Times says Taylor provided an “excruciatingly detailed” opening statement that described the quid-pro-quo pressure campaign that Trump and his allies have been denying. The Washington Post describes the testimony as “damning.”

The opening statement from Bill Taylor, the acting US ambassador to Ukraine, to the House impeachment inquiry solicited “sighs and gasps,” Politico reports.

Rep. Andy Levin (D-MI) is quoted by the Wall Street Journal: “All I have to say is that in my 10 short months in Congress – it’s not even noon, right – and this is my most disturbing day in Congress so far. Very troubling.” He did not elaborate.

When asked how much longer today’s Taylor deposition will go, Rep. Mark Meadows (R-NC) told the Daily Beast: “Y’all have plans for the weekend?”

“A federal grand jury investigating activities surrounding Rudy Giuliani’s back-channel campaign in Ukraine has demanded legal documents that include records of extravagant spending at Trump hotels and millions of dollars in financial transfers by Lev Parnas and Igor Fruman, two key operatives who carried out the plan,” BuzzFeed News reports.

“The documents requested by a subpoena that was issued in Florida last week could shed light on whether other people, including foreign nationals, were trying to influence the top levels of government and impact the 2020 presidential campaign.”

“The Justice Department says Imaad Zuberi will admit in federal court in Los Angeles that he falsified records to conceal his work as a foreign agent while lobbying high-level U.S. government officials.”

President Trump compared the ongoing impeachment inquiry into him to a “lynching.”

“Haven’t even had coffee yet and the occupant of the White House, the bigoted man who called for the execution of the exonerated five, is tossing the word ‘lynching’ around. Lord give me the strength to not take the bait but hold this man accountable for every single thing he says and does. Don’t take your eye off the ball family. A major witness is testifying today and he’s using a predictable play to try to distract and divide. We see right through him.” — Rep. Ayanna Pressley (D-MA), on Twitter.

“In the days after President Donald Trump paved the way for Turkey to invade Syria, several of his closest allies went to the White House — twice — to try to change his mind,” NBC News reports.

“Retired Gen. Jack Keane, a Fox News analyst, first walked the president through a map showing Syria, Turkey and Iraq on Oct. 8, pointing out the locations of oil fields in northern Syria that have been under the control of the U.S. and its Kurdish allies, two people familiar with the discussion said. That oil, they said Keane explained, would fall into Iran’s hands if Trump withdrew all U.S. troops from the country. Keane went through the same exercise with Trump again on Oct. 14, this time with Sen. Lindsey Graham (R-SC) at his side.”

Russian President Vladimir Putin played host to Turkey President Recep Tayyip Erdogan for more than six hours of talks on how they and other regional players will divide control of Syria, a land devastated by eight years of civil war, the New York Times reports.

“The negotiations ended with a victory for Mr. Putin: Russian and Turkish troops will take joint control over a vast swath of formerly Kurdish-held territory in northern Syria, in a move that cements the rapid expansion of Russian influence in Syria at the expense of the United States and its Kurdish former allies.”

The British Parliament voted to reject the government’s timetable for the passage of the bill that would implement Prime Minister Boris Johnson’s Brexit deal, The Guardian reports. They voted against the measure by 322 to 308.

Johnson suggested earlier he would seek a general election if he lost.

“The author of an anonymous column in the New York Times in 2018, who was identified as a senior Trump administration official acting as part of the ‘resistance’ inside the government, has written a tell-all book to be published next month,” the Washington Post reports.

The book, titled, A Warning is being promoted as “an unprecedented behind-the-scenes portrait of the Trump presidency” that expands upon the Times column, which ricocheted around the world and stoked the president’s rage because of its devastating portrayal of Trump in office.

According to CNN, the literary agency representing the author declined to comment on whether the person still worked in the administration.

Someone needs to identify this person. I support whistleblowers, but now this person is now trying to make money while doing nothing to stop Trump. It’s a rare form of cowardice.

Senate Majority Leader Mitch McConnell (R-KY) denied in a CBS Newsinterview ever telling President Trump that his Ukraine call was “perfect” or “innocent,” as the president has claimed. Asked whether Trump was lying, the Kentucky Republican replied: “You’d have to ask him.”

“President Trump has for weeks been privately testing the idea of replacing his chief of staff, Mick Mulvaney, who’s swiftly fallen out of favor with some of the president’s allies after high-profile stumbles handling the House impeachment inquiry,” Bloomberg reports.

“About a month ago, Trump said to Treasury Secretary Steven Mnuchin in front of a roomful of staff: You have such great ideas, why don’t you be my chief? He has made similar remarks about Chris Liddell, a deputy chief of staff at the White House… He’s also asked advisers whether his counselor Kellyanne Conway would be a good chief of staff.”

Wall Street Journal: “Mr. Mulvaney didn’t anticipate the blowback awaiting when he stepped away from the podium on Thursday after addressing reporters in the White House briefing room for the first time in his 10 months as acting chief of staff.””

As White House officials described the scene, after responding to multiple questions about Ukraine, Mr. Mulvaney went to the office of Stephanie Grisham, the White House communications director and press secretary.”

Responded Grisham: “There’s a couple things we’re going to have to clean up.”

Politico: “In any other year, the race to lead the House Oversight and Reform Committee would be a full-out caucus brawl. But amid the Democrats’ impeachment push, it could end up being a coronation. Passed over for the top Oversight post nearly a decade ago, New York Rep. Carolyn Maloney could soon become the panel’s permanent chairwoman and a leading face of Democrats’ impeachment probe.”

“President Trump’s effort to pressure Ukraine for information he could use against political rivals came as he was being urged to adopt a hostile view of that country by its regional adversaries, including Russian President Vladi­mir Putin,” the Washington Post reports.

“Trump’s conversations with Putin, Hungarian Prime Minister Viktor Orban and others reinforced his perception of Ukraine as a hopelessly corrupt country — one that Trump now also appears to believe sought to undermine him in the 2016 U.S. election.”

Associated Press: “The president sees the Eastern European ally, not Russia, as responsible for the interference in the 2016 election that was investigated by special counsel Robert Mueller.”

“It’s a view denied by the intelligence community, at odds with U.S. foreign policy and dismissed by many of Trump’s fellow Republicans. But Trump’s belief suggests the extent to which his approach to Ukraine — including his request, now central to impeachment, that the Ukraine president do him a ‘favor’ and investigate Democrats — was colored by a long-running, unproven conspiracy theory that has circulated online and in some corners of conservative media.”

Said Trump in private: “They tried to take me down.”

New York Times: “When President Trump announced this month that he would pull American troops out of northern Syria and make way for a Turkish attack on the Kurds, Washington’s onetime allies, many warned that he was removing the spearhead of the campaign to defeat the Islamic State, also known as ISIS.”

“Now, analysts say that Mr. Trump’s pullout has handed the Islamic State its biggest win in more than four years and greatly improved its prospects. With American forces rushing for the exits, in fact, American officials said last week that they were already losing their ability to collect critical intelligence about the group’s operations on the ground.”