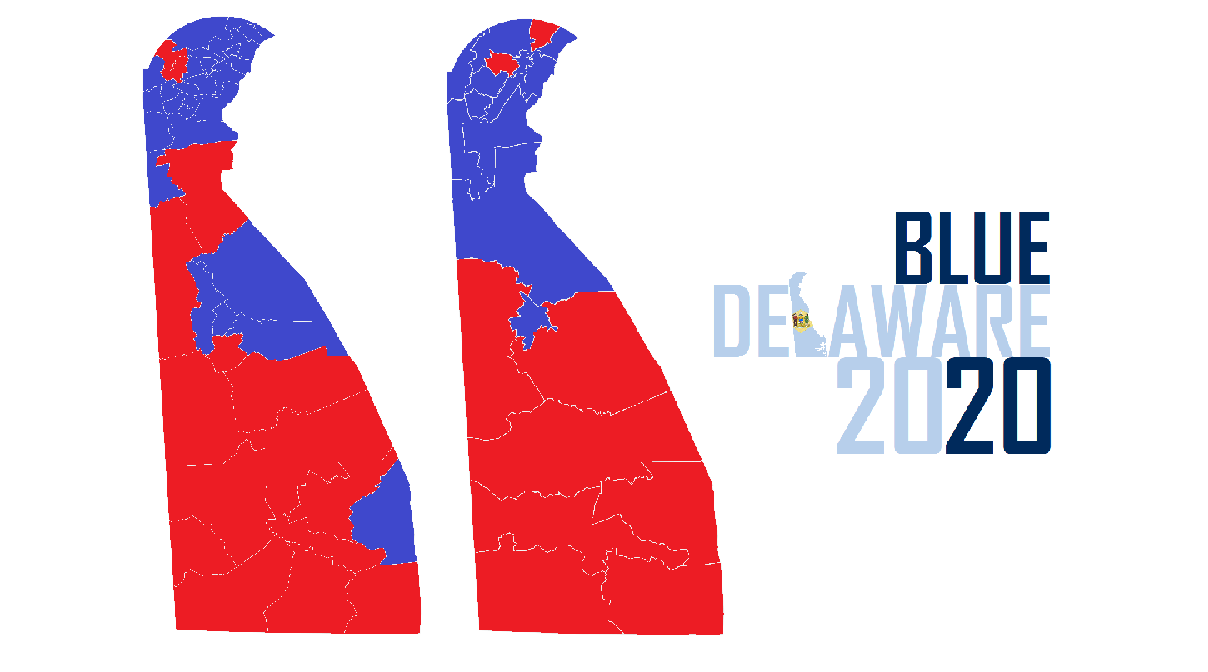 The focus of the 2020 election nationwide will be on the Presidential race, and the focus statewide will be on whether Governor John Carney gets reelected to a second term. But the focus should be in the General Assembly and County Councils (or in Kent County, the “Levy Court”). It is an ironic twist that almost everyone can name the President or the Governor, but not their own state Representative or state Senator, which is dumb since your state Representative or state Senator are usually the elected officials most responsive to something you want done in your neighborhood.

Currently, Democrats control both houses of our General Assembly. In the House, Democrats hold 26 seats to 15 for the Republicans. Here is a state map of the Representative Districts (RDs) color coded to which party currently holds the district. I have also highlighted in the lighter shade of pink three districts currently held by Republicans that should get a credible challenges from Democrats.

In the 21st RD, incumbent State Representative Mike Ramone (R) is getting a rematch with Democrat Stephanie Barry, who barely lost to Ramone in 2018. The 9th RD, currently held by incumbent Kevin Hensley (R), is always a tempting target for Democrats, who have held the district before. But I feel this district is going to need a new candidate. In the last two elections, local Democrats have nominated Monique Johns, and I hear she intends to run a third time. I fear she will do no better against Hensley in a second rematch, so here’s hoping they select a new candidate. In the 22nd RD, currently held by freshman Republican Michael Smith, I hear that 2018 Democratic nominee Guillermina Gonzalez will not seek a rematch. Hopefully a credible challenger can be found because this district, with its favorable demographics, is winnable for the Dems.

In the Senate, the margins are closer, with Democrats having the majority with 12 seats of the 21 seats in the chamber. Republicans hold 9 seats. Here is a state map of the Senate Districts (SDs) color coded to which party holds the district. There are two districts that receive strong and credible challenges from Democrats, and I have highlighted them in pink as well.

Democrats will definitely be targeting two districts in each chamber currently held by Republicans but which were won by Hillary Clinton in 2016: the 5th and 7th SDs.

In the 5th, Senate Minority Whip Cathy Cloutier (R) is perhaps the most vulnerable state senator in the country as she holds the most Democratic district in the country currently held by Republican.  There are three Democrats currently vying to face her: party favorite Attorney Kyle Evans Gay; Arden Town Assembly chairman Jeffrey Politis; and Eric Levin, who runs a K-12 tutoring service in Wilmington.

In the 7th SD, State Senator Anthony Delcollo (R) win a surprise victory over then Senate President Pro Tem Patricia Blevins (D) in 2016. Now facing his first reelection race, where he would be most vulnerable to defeat, Delcollo should be a prime target, especially given the outsized Democratic turnout expected in 2020 against Donald Trump. But so far, I have not heard of any candidates preparing campaigns. It will political malpractice of the first order if we do not find a credible candidate to challenge Delcollo, so snap to it, Dems.

Finally, here is a partial list of offices up for election in 2020. I have yet to include all the county seats and offices that will be up for election, but in subsequent updates every race will be listed. And we will update this list when new candidates announce their candidacies.