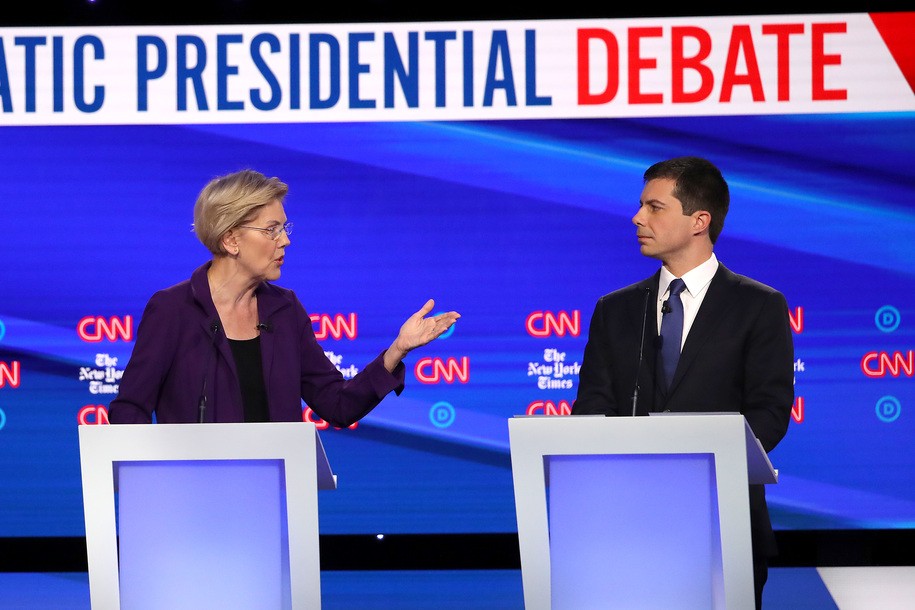 A new USA Today/Suffolk poll in Iowa finds Joe Biden leads the Democratic presidential race with 18%, followed by Elizabeth Warren at 17% and Pete Buttigieg at 13%.

Said pollster David Paleologos: “Iowa is unquestionably up for grabs…. All of this is happening while the number of undecided voters continues to grow as Democratic caucusgoers pause to reevaluate the changing field.”

Interesting. My theory has been that the only way Bernie Sanders and the field can survive until Super Tuesday is if Warren does not win both Iowa and New Hampshire. Because if she does, then the race is likely just between her and Biden down the stretch. But if Buttigieg wins Iowa, and then Warren wins New Hampshire and Biden wins South Carolina, brokered convention here we come!

The same poll finds Minnesota voters are evenly split on whether President Trump should be impeached and removed from office, 48% to 48%, but clear majorities believe that he lies and abuses his power.

“Secretary of State Mike Pompeo will make another trip to Kansas on Thursday in a move sure to reignite speculation about his political future,” the Wall Street Journal reports.

“The official visit—the secretary of state’s third official appearance in the state this year—is seen by Kansas Republicans as the latest sign that Mr. Pompeo hasn’t fully ruled out a 2020 run to succeed retiring GOP Sen. Pat Roberts.”

Pompeo was once seen as a savior to prevent the Kansan Republicans from nominating Kris Kobach and thus giving Democrats a free Senate seat in 2020. But now Pompeo himself is severely damaged by the Ukraine Shakedown, so much so that he might face indictment.

Said Trump: “Hillary Clinton, I don’t know if you’ve heard of her, she’s the one accusing everybody of being a Russian agent. Anybody that is opposed to her is a Russian agent. That’s a scam that was pretty much put down.”

“Sen. Elizabeth Warren said Sunday her campaign will release a plan to pay for the Medicare-for-all health proposal she’s backed ‘in the next few weeks,’ but she continued to deflect questions about whether middle-class taxes would go up,” the Washington Post reports.

“That promise comes after weeks of attacks from other Democratic candidates in the presidential race, who say Warren is not being honest with voters about how she would fund the massive health-care plan.”

“The lag in unveiling a payment plan speaks to the difficult position Warren is in: She can either offer some kind of large tax above her wealth tax on the very rich or be pegged as evasive about a major element of her platform. Both carry political risks.”

“Sen. Elizabeth Warren is calling for $800 billion in additional federal funding for public education, a move that would exhaust the remaining revenue to be raised by her proposed wealth tax even as she seeks ways to finance Medicare for All,” the Wall Street Journal reports.

“Ms. Warren outlined on the blog site Medium an additional $450 billion in Title I funding to boost schools with low-income students, $200 billion in grants for students with disabilities and $100 billion in other grants over 10 years. She also vowed to invest $50 billion in school infrastructure on top of existing funding for school upgrades that are in some of her other policy proposals.”

A new PRRI American Values Survey finds that 46% of Americans say they disapprove of President Trump and that nothing he could do would change their minds. By contrast, only 26% of respondents say the opposite: They’ll stick with Trump no matter what he does.

Among Democrats, unwavering opposition to Trump extends to 77% of respondents. Among independents, it’s 45%. And even though a large majority of Republicans continue to stand by Trump, 50% of them say that they could change their minds.

Trump’s political base is the 37% of Republicans that supports him no matter what. Overall, it’s 26% of voters, suggesting that’s the floor for his approval rate.

That’s not a great place to be heading into re-election. If the survey is correct, Trump can lose more support than he can gain.

Jonathan Chait: “If you paid close attention to the Democratic presidential debate this week, you noticed something that Democrats might find disturbing. The two leading candidates — Elizabeth Warren and Joe Biden, probably in that order — both faced tough questions that could damage them in the general election. And neither appears prepared to defend themselves against what is coming…”

“Donald Trump and the Republican National Committee have raised more than $300 million this year for his re-election — more than any other sitting president in history at this point in the campaign,” Politico reports.

“Trump has nearly twice as much cash on hand — $158 million, between his campaign account and the RNC — as Barack Obama and the Democratic National Committee had at this time in his successful re-election run.”

“Voters in the states likeliest to decide the 2020 presidential election support the impeachment inquiry that House Democrats began last month, but a majority still opposes impeaching President Trump and removing him from office,” according to a New York Times/Siena College survey.

“In the six closest states carried by the president in 2016, registered voters support the impeachment inquiry by a five-point margin, 50% to 45%. The same voters oppose impeaching Mr. Trump and removing him from office, 53% to 43%.”

Julián Castro on Monday threatened to suspend his presidential bid unless he can raise nearly $1 million by the end of the month, Politico reports.

Said Castro: “If I can’t raise $800,000 in the next 10 days — I will have no choice but to end my race for president. If I don’t meet this deadline, I won’t have the resources to keep my campaign running.”

CNN: “People linked to the Internet Research Agency, the Kremlin-backed troll group indicted by the United States for its alleged interference in the 2016 US presidential election, are laying the groundwork to do the same in 2020, new information released by Facebook on Monday suggests.”

“Profiles originating in Russia had since the beginning of this year been building a network of accounts on Instagram designed to look like groups in swing states.”

“Although the accounts posed as Americans from all sides of the political spectrum, many were united in their opposition to the candidacy of former Vice President Joe Biden.”

Sen. Mitt Romney told Axios that he believes Republican lawmakers stay quiet on their Trump criticisms for fear of losing the Senate or the presidency to Democrats, especially Sen. Elizabeth Warren.

Said Romney: “They don’t want to do something which makes it more likely for Elizabeth Warren to become president or for us to lose the Senate. So they don’t want to go out and criticize the leader of our party because they feel that might have the consequence of hurting our country longer term.”