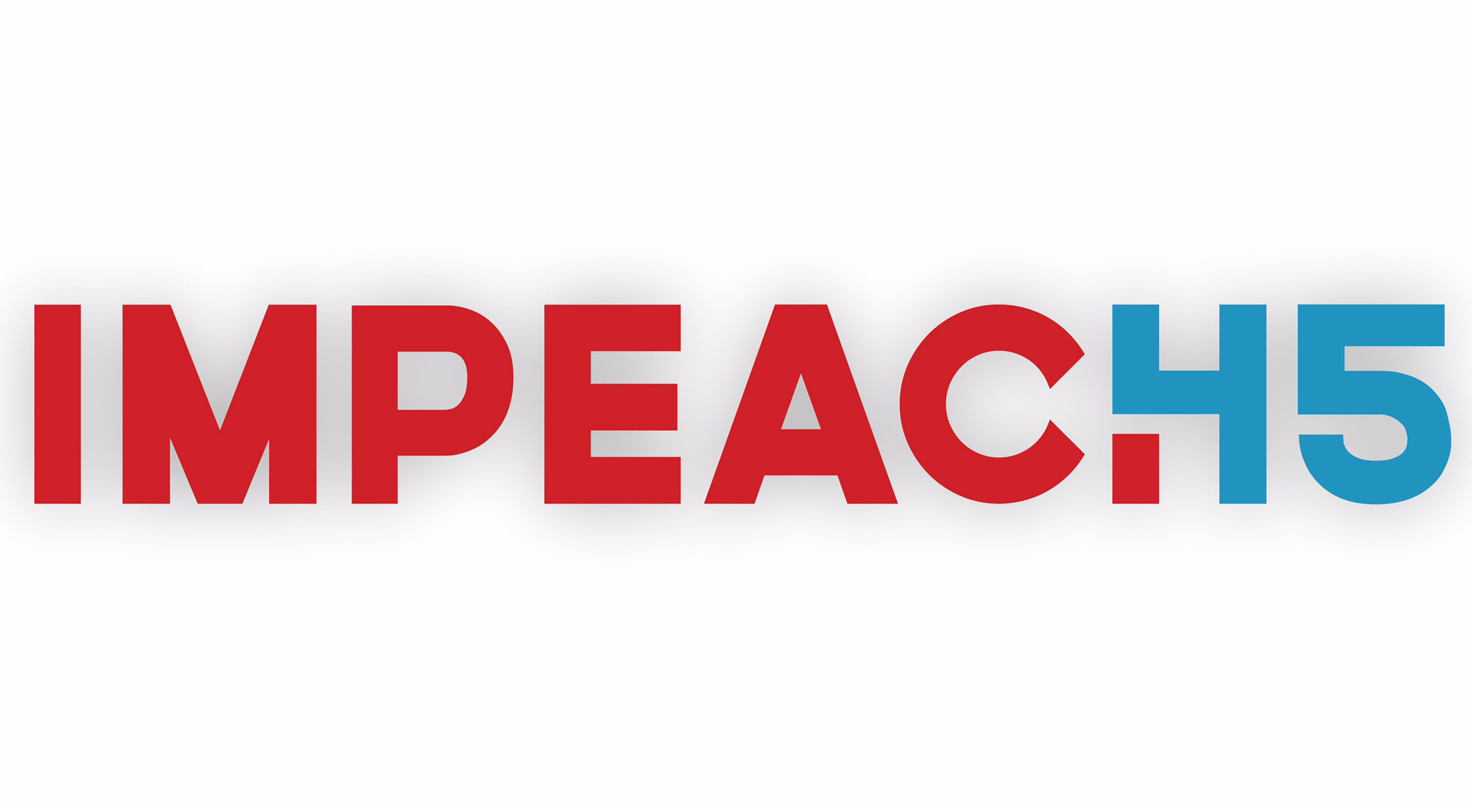 And there it is, the other quid pro quo. Bloomberg reports that criminal Ukrainian oligarch Dmitry Firtash offered to help Rudy Giuliani and Trump and Fox News associates Joseph DiGenova and Victoria Toensing fabricate dirt on Joe and Hunter Biden. In return, Firtash demanded that they get Trump to get all US corruption charges against Firtash dismissed. Firtash has been fighting extradition to the US on federal corruption charges since 2014. Everyone is going to jail.

Washington Post: “Two Cabinet secretaries. The acting White House chief of staff. A bevy of career diplomats. President Trump’s personal attorney. And at the center of the impeachment inquiry, the president himself.”

“Over two weeks of closed-door testimony, a clear portrait has emerged of a president personally orchestrating the effort to pressure a foreign government to dig up dirt on a potential 2020 political rival — and marshaling the full resources of the federal bureaucracy to help in that endeavor.”

CNN: What House investigators have learned after two weeks of Ukraine interviews.

Sen. Mitt Romney (R-UT) suggested that Turkish President Recep Tayyip Erdogan might have given President Trump an ultimatum — and that Trump caved, the Washington Post reports.

“Here is a U.S. senator — and a Republican one — suggesting not just that Trump got out-negotiated, but that he basically got told what was going to happen and ran away. Romney is entertaining the idea that a relatively small country forced the hand of the United States and also dictated to the supposed dealmaker in chief.”

Senate Majority Leader Mitch McConnell (R-KY) writing in the Washington Post: “Withdrawing U.S. forces from Syria is a grave strategic mistake. It will leave the American people and homeland less safe, embolden our enemies, and weaken important alliances. Sadly, the recently announced pullout risks repeating the Obama administration’s reckless withdrawal from Iraq, which facilitated the rise of the Islamic State in the first place.”

The Atlantic: “The country is entering a new and precarious phase, in which the central question about President Donald Trump is not whether he is coming unstrung, but rather just how unstrung he is going to get.”

“The boiling mind of Trump has spawned a cottage industry for cognitive experts who have questioned whether he is, well, all there. But as the impeachment inquiry barrels ahead on Capitol Hill, several associates of the president, including former White House aides, worry that his behavior is likely to get worse. Angered by the proceedings, unencumbered by aides willing to question his judgment, and more and more isolated in the West Wing, Trump is apt to lash out more at enemies imagined and real, these people told me. Conduct that has long been unsettling figures to deteriorate as Trump comes under mounting stress.”

Stephen Collinson: “That apt mission doctrine for a presidency blazing with abuses of power, conflicts of interest and unhinged behavior is the work of White House acting chief of staff Mick Mulvaney, whose barn burner of a briefing on a day of political train wrecks, staggering misdirection and reality bending sent a clear message.”

“Democrats can impeach President Donald Trump, Republicans can bemoan his betrayal of the Kurds and the media can fact-check him till the cows come home — but nothing is going to restrain or moderate him. In fact, he’s becoming ever more incorrigible.”

“The President’s brazen willingness to do exactly what he wants — key to his appeal to voters angry with the political establishment in 2016 — shone through a wild few hours that briefly stole the spotlight from the Democratic impeachment inquiry.”

Outraged by secretly-taped anti-Trump comments attributed to CNN President Jeff Zucker and others at the cable network, President Trump’s campaign is vowing to sue the company for “a substantial payment of damages,” the Washington Examiner reports.

“The Oct. 8 briefing, which came two days before trade talks between senior U.S. and Chinese officials, was arranged by Larry Kudlow, the director of the White House National Economic Council. The meeting included Stephen Moore, an economic commentator and a former candidate for the Federal Reserve Board, and Republican economist Lawrence Lindsey, the people said.”

“A day after President Trump awarded the massive Group of Seven summit to his own struggling Doral resort in Florida, the White House said Trump’s company would only charge taxpayers enough to cover the resort’s costs,” the Washington Post reports.

“But neither the White House nor the Trump Organization answered more detailed questions about what that means. They did not provide specific dollar amounts or say if dollar amounts have been agreed to.”

“Fighting continued Friday morning in a northeast Syrian border town at the center of the fight between Turkey and Kurdish forces, despite a U.S.-brokered cease-fire that went into effect overnight,” the AP reports.

“Shelling and gunfire could be heard in and around Ras al-Ayn as smoke billowed from locations near the border with Turkey and the Turkish town of Ceylanpinar. The fighting died down by mid-morning while smoke continued to rise.”

Politico: “Energy Department Secretary Rick Perry’s departure from the Trump administration doesn’t resolve the most pressing question about his role in the Ukraine scandal — whether he will cooperate with House Democrats’ impeachment probe.”

“Perry, who told President Donald Trump on Thursday he intends to resign, faces a Friday deadline to comply with a House subpoena for information about outreach to Ukraine, which came as the president’s emissaries were pushing Kiev to launch a corruption investigation into former Vice President Joe Biden and his son Hunter. House investigators also appear to be edging toward issuing a subpoena for Perry to testify — something he could be freer to do once he’s no longer in the administration.”

Energy Secretary Rick Perry, who will be leaving his post by the year’s end, said Friday that he is not sure whether he will comply with a subpoena from House Democrats conducting an impeachment inquiry into President Trump, CNBC reports.

Aa rally in Dallas, President Trump “justified the idea of removing American troops from Syria by saying he did not want to deplete the U.S. military anymore or continue to entangle the U.S. in what he called ‘the endless wars,’” Politico reports.

“It was good to let Turkey attack the Kurds, longtime U.S. allies in the fight against ISIS, Trump said, because ‘sometimes you have to let them fight like two kids. Then you pull them apart.’”

Washington Post: “First came the lengthy infomercial touting President Trump’s private golf resort in Florida as ‘far and away the best’ site in the country to host next year’s Group of Seven summit of world leaders. Then, an admission: Trump did, in fact, withhold aid to Ukraine because he wanted the government there to investigate Democrats.”

“For 39 minutes Thursday, White House acting chief of staff Mick Mulvaney turned the press briefing room into a sort of confession chamber, openly admitting to several acts that could deepen the legal predicament for the president. Trump is facing an impeachment inquiry into whether he has abused his office for personal and political gain.”

“Mulvaney’s retort to those charges came in a three-word mantra that now forms the central theme of the White House impeachment response: ‘Get over it.’”

“The Supreme Court will review whether the leadership structure of the Consumer Financial Protection Bureau is constitutional, a case with ramifications for the president’s powers to control the direction of independent government agencies,” the Wall Street  Journal reports.

He added: “I’m honored to be considered that by Donald Trump because he also called Meryl Streep an overrated actress. So I guess I’m the Meryl Streep of generals, and frankly that sounds pretty good to me And you do have to admit that between me and Meryl, at least we’ve had some victories.”

“I earned my spurs on the battlefield; Donald Trump earned his spurs in a letter from a doctor.” — Former Defense Secretary James Mattis, quoted by ABC News.

Rep. Francis Rooney (R-FL) says he was “shocked” by Mick Mulvaney’s remarks on blocking Ukraine military aide and rejected his walk back, Bloomberg reports. Said Rooney: “How in life can you do those kinds of things when you’ve just said it right there on national TV? It’s not an etch-a-sketch.”

Former Gov. John Kasich (R) said he would back President Trump’s impeachment if he were in the House, The Hill reports.

Said Kasich :“Look, I fought with people on air over, ‘Is there a quid pro quo’ and ‘Does this rise to the level of impeachment.’ I now believe that it does. And I say it with great sadness. This is not something I really wanted to do.”